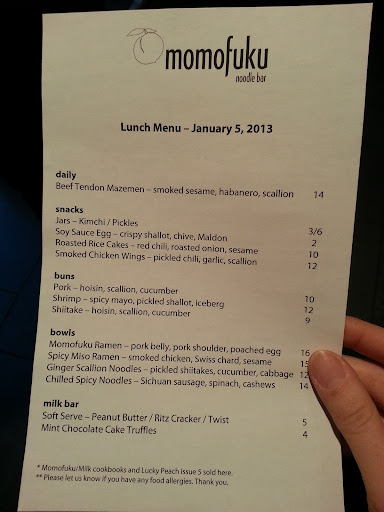 Shortly after I posted about Ma Peche and Ippudo (okay, literally, the day after), Dessert Zombie and I met up for pork buns and ramen. I’ve resisted the pull of Noodle Bar for many, many years, entirely because my friends – whose opinions I trust – have told me the noodles are mushy, and no one whose food opinion I trusted AND respected has ever told me they like Noodle Bar’s ramen.

***Halfhearted apologies to all who read that and realize that I am talking about them since they have recommended the place to me in the past.

Momofuku Noodle Bar is home to THE most expensive bowl of ramen, as-is, in NYC. You can get more expensive bowls of noodles by adding on every add-on on a given menu at other places, but Momofuku ramen, at $16, is more than Ippudo, the second most expensive ramen in NYC, a few avenues away.

Let’s see how it tastes. 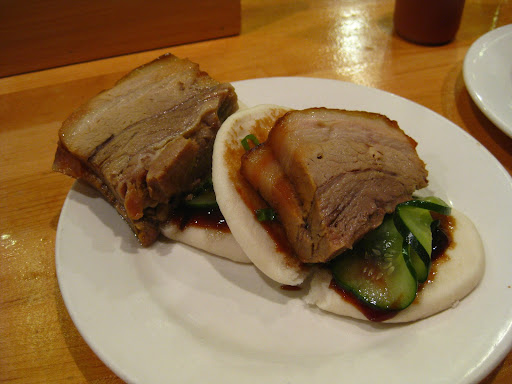 Well, first let’s have some pork buns. I’d really enjoyed these at Ma Peche, and expected these to be much the same. Overall, they were, except these were much, much messier… with a lot more pork. Who complains about the amount of meat in a sandwich? Well, when it throws off the balance of meat-to-bun, I do… still very good, though. 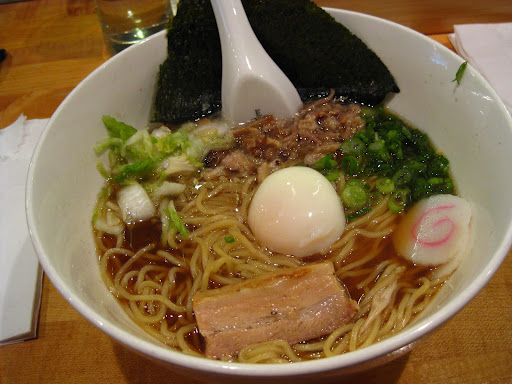 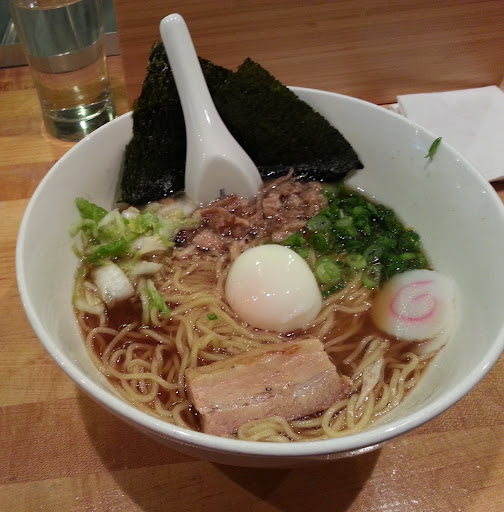 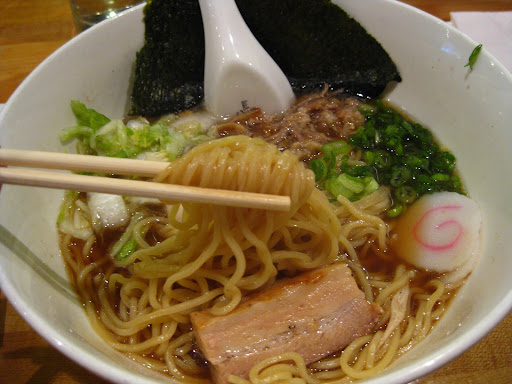 This dish contains two types of pork: pork belly and pork shoulder. The pork belly was good, just as the one in the buns is. The pork shoulder was, essentially, pulled pork (or chopped)… but was texturally dry even in the broth. It was also super oily. Pork belly is fatty. My broth had a thick layer of oil/fat floating on top that made it very hard for me to want to drink any of the broth – which is one of the best parts of ramen.

One of the other best parts of ramen is the noodles… except when they’re overcooked and mushy, as these were unforgivingly so.

And… while I love salt, I don’t like something to be all salt. There needs to be balance. Complexity to the broth. This tasted like oil, fat, salt… and not in a lovely, balanced, delicious way. This was just… horrid.

I was so disappointed. Dessert Zombie and I were both wildly let down, though we had both come in with measured expectations since we’d each heard separately negative things about the place. I wasn’t expecting much, but I wasn’t expecting this. Especially after my rather positive experience at Ma Peche, I thought I might at least find Noodle Bar sufficient.

Friends asked me what I thought later, and I don’t recall the last time I’ve actually called a food disgusting… certainly not on the blog (I found a reference to a rotten mussel smelling disgusting, but no one would disagree with that). This bowl of ramen, however? it was disgusting. A pool of oil floating on top of water from the Dead Sea, no complexity or depth to it, filled with overcooked chopped pork shoulder, mushy noodles, and a slice of good pork belly, all for $16… how else would you describe that but disgusting? Well, insulting. Insulting that anyone could serve this and expect that I’d enjoy it… but I guess that happens every day. I did take a look around the restaurant and didn’t see anyone else with the same look of pure disgust as graced my face; people were enjoying this.

Oh, the poached egg was good, although there was little to no egg white of which to speak.

I’m positive someone out there will disagree viciously with me. I’ll allow that “perhaps I had a bad bowl; perhaps it was an off day for the kitchen; perhaps it simply wasn’t to my personal tastes” – you can say what you want. What was served to me was absolutely disgusting, and no, I didn’t finish it. I ate what I could stomach, just so I wouldn’t be hungry and gnaw my arm off later, but I… the girl who can’t stand throwing away food… left a decent amount of food in my bowl, and tried to pawn them off on my poor friend. (He declined.)

You will not find me returning to give this another shot. There is absolutely no reason I would order this again; better bowls of ramen can be found all over the entire city, for much less money… and I would say “less wait” except I went at noon on a Saturday, and there was no wait whatsoever. You can’t even decry me for being a brat who factors wait into how much I like something! There was no wait, and I still thought it was awful.

I won’t be back. I would return to Ma Peche for the buns, and I might even go to Ssam Bar where I’ve been informed they have duck buns. But Noodle Bar is on my sh*t list for serving me a bowl of the worst ramen I’ve ever had. The pork buns being good doesn’t make up for it (and they were better at Ma Peche).