The day the world was supposed to end, I met up with a bunch of friends to check out pho ga at Thai Son‘s Chinatown location. Since my latest visit to San Francisco in October, I’ve decided it’s high time I found a place that makes pho ga (chicken pho) in NYC – maybe even as good as Turtle Tower. Unfortunately, my searching the internet for this dish in NYC turned up very few places, so I chose Thai Son – where I KNEW FOR SURE they had it – and a few people came along, curious by my raving about it.

If you clicked on that link to my visit to Thai Son in Jackson Heights, you can see clearly that the pho ga looks like water with noodles and a few slices of very sad white meat chicken. But I had hope… I had hope. 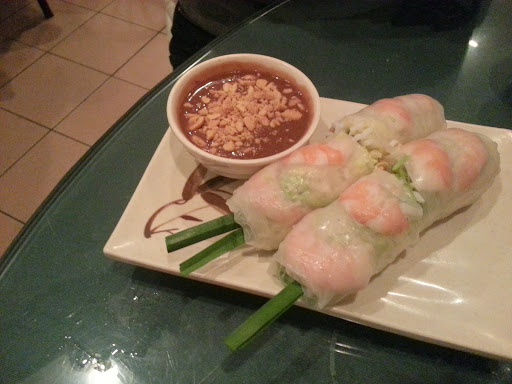 Blind Baker and I opted to split the summer rolls. Though Dessert Zombie and Cheese were with us, neither of them were interested. While this is one of my favorite things to eat at Vietnamese restaurants, I’m often disappointed. These were okay though – the wrappers were on the gummy side, not particularly dried out, so I think they made it fairly recently. The shrimp were pretty big – and a little more than I’m used to (usually three half shrimp), and the rolls overflowing with noodles and lettuce. I liked them, and would order them again, even with gummy wrappers. 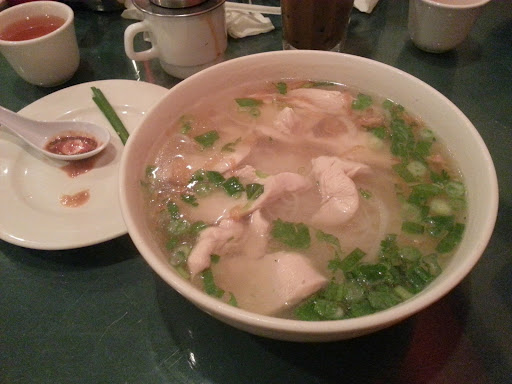 When my pho ga arrived, I was happy to see that it didn’t look as dreadfully boring as it had at the other location when someone else ordered it. I sipped the soup and was relieved to see that they weren’t just serving me beef pho with chicken slices on top – this was definitely a chicken-based broth, clear, sweet, and not as murky/’muddled’ as beef pho tends to taste for me. It wasn’t complex, but I really enjoyed the flavor, mixed with a bit of lemon squirted in – and later on, I added a bit of Sriracha and hoisin sauce because I like those in my pho sometimes. It hit the spot, and while it’s nowhere near as delicious as Turtle Tower’s, it suffices in a pinch. If I’m craving chicken pho and stuck on the East Coast, I could see ordering it here – though it won’t trump my normal order on a regular basis.

Cheese also ordered the chicken pho to give it a shot, after he’d heard me rave about the one from Turtle Tower in the past. I will let him share his thoughts in comments as opposed to trying to clearly explain what I recall him saying, which might not be entirely accurate.

Oh, and this place was super busy, super disorganized in terms of waiting for a table, but filled with lots of people of all races on a chilly Friday night. You can use that information however you see fit.

Oh and afterwards, we went to a Mayan End of the World party, where Dessert Zombie brought this cake. And I ate a whole slice because it was really good. Mocha cake from Veniero’s. Yum.

« What I’ve been eating…
Christmas Goodies »