Apologies in advance for the terrible, terrible photos – though I did use my dSLR for these, the restaurant was dark, it was a large group dinner (so I was trying to snap photos even quicker than normal), plus… probably the real culprit… I’d been drinking all day, and didn’t stop at dinner. *sheepish grin* Sorry… a girl’s gotta have fun sometimes, y’know?

After lunch at Ippudo and shopping all around with JKL, I headed to Tribeca to join the girls for HB’s birthday at Tribeca Canvas, the latest from Masaharu Morimoto (whose name you may recognize from Iron Chef & Iron Chef America, or his other restaurants). Funny coincidence – my first time at Morimoto in Philly was with HB (her first time as well), and when Morimoto NYC opened, we were there the first week it opened, along with StB… and here we were, all three at Tribeca Canvas the first week it opened. 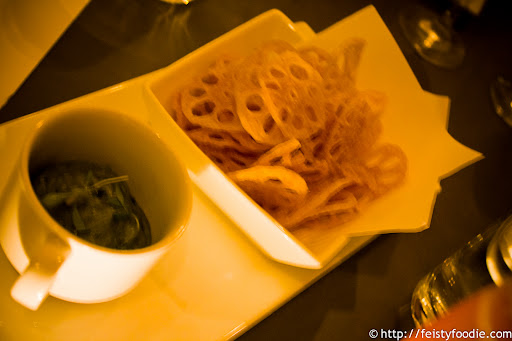 Some of us were ravenous, so we started off with a couple of appetizers to munch – lotus root chips with guacamole. Nothing outstanding; perfectly satisfactory, and the combination, while unique, didn’t wow me. It was… good. 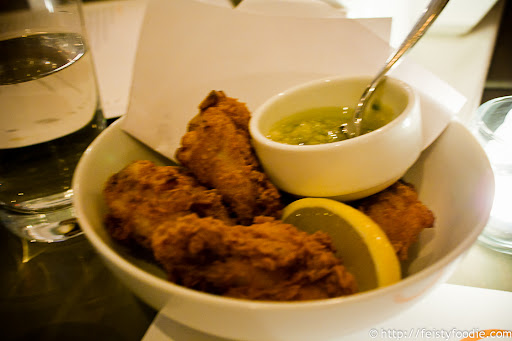 Chicken kara age with ginger scallion jalapeno sauce. I am obsessed with fried chicken; this is not news. Kara age, Japanese fried chicken, is part of that obsession, so when I saw it on the menu, two orders landed on our table shortly after. I was incredibly surprised to see there were bones in the chicken – I’m not used to kara age using bone-in chicken. However, these incredibly delicious fried chicken drumettes – very obviously buttermilk soaked, with a light, almost cornflake-y crust that remained crisp while housing very moist and juicy chicken inside. The dressing was unnecessary, but when used, added a delightful tang to the chicken. Though I frown slightly at calling this kara age – I get that it’s meant to be a bit of fusion, a bit comfort food – I would still say this dish is a winner. I happily ate an extra piece because I really enjoyed it. 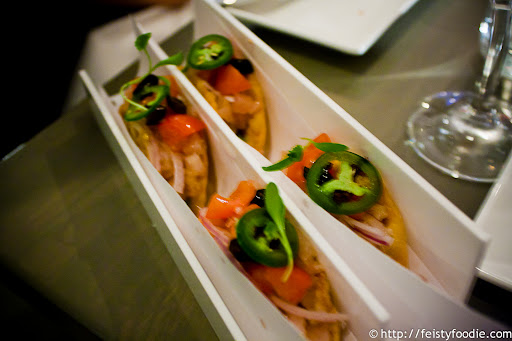 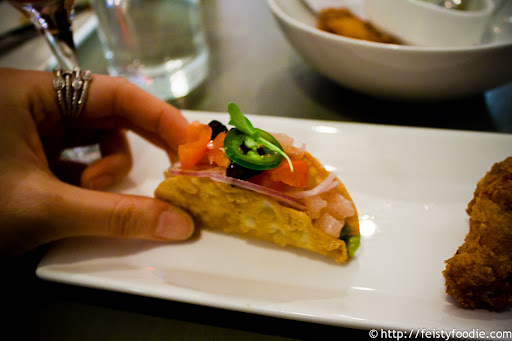 HB wanted to try the hamachi tacos, which are ordered by the piece. I don’t think she read that part of the menu, because when she placed the order, our server asked how many she’d like – so she ordered one for each of us. These tiny bites were actually really, really good – raw hamachi, guacamole and a jalapeno on top of each – the perfect combination of crunch, tanginess, and fish taste. However, while looking up the dish just now to find its exact name, I discovered these were $5 each. Yeah… they were tasty, but I don’t think they warrant that price tag – even at a Morimoto establishment. 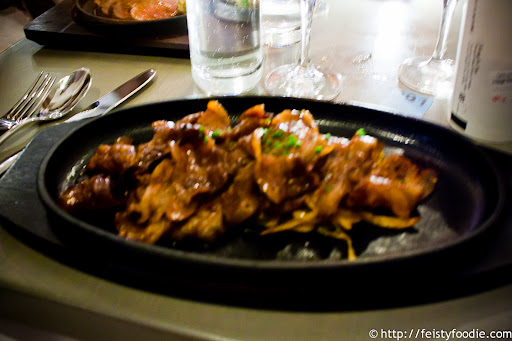 As for my super duper blurry main course, pork belly yakiniku… I was incredibly excited because I freaking love pork belly. It’s unfortunate that this picture is so horrible, because it would help if you could see what I’m about to describe… In any case, when it arrived, I was surprised to see how much my plate looked like… bacon. Before you freak out, I KNOW that bacon is made of pork belly. But cooked pork belly usually doesn’t curl around the edges the way cooked bacon does. This wasn’t very smoky, so I don’t think it was actually bacon, but the slight curling edges were a sight… Given that this is a very fatty part of the pig, served like so on a hot plate over the bean sprouts and cabbage, all of the fat was dripping into, onto, over the veggies to the point they were saturated with the fat, and tasted solely of pork fat and sweet ginger soy sauce – which is a fancy, deconstructed way of saying ‘teriyaki’. The whole dish was overly oily/fatty, and coated my mouth with so much fat that I couldn’t taste anything else. I wasn’t the only one – half my group had ordered the same, and we all looked at each other, desperate for a bowl of white rice to sop some of sauce up and help cut the fat. The portion was huge, considering how much of it was fat, and I barely ate half before taking the rest home to mix with other things to eat – but we did all ask our (very cute, very young) server if we could order any sides to cut the richness of our meat dishes. He suggested something at first that was ridiculous (I think the risotto – which would not help with richness at all!) but then landed on Brussels sprouts, which we requested be prepared very simply. They came out, sauteed plainly, and it worked as a foil for the most part – expertly cooked as they were – but I was still kind of sadfacing over the disaster of my main course. Way too heavy, way too much, way too rich… just way too. Don’t get me wrong – this would have been very tasty with something to cut through the fat, or offset some of it. But sitting in a pool of its own rendered fat, with veggies that were doing the same, the dish was very one-note, and failed to ‘comfort’ me as the ‘comfort food, Morimoto-style’ theme suggested.

We didn’t leave without dessert, but I somehow didn’t take photos. Just as well – aren’t you getting a headache from my terrible photos above?

There was an apple tart that went to the birthday girl, and an ice cream dish. But my eyes were on the churros 3 ways – traditional, cream filled, and chestnut filled. The chestnut fell the shortest for me – it was interesting, but I didn’t think the combination worked. Cream filled was lovely, with a slightly sweetened pastry cream sandwiched between two churros, and traditional was fantastic, plain or dipped in the accompanying chocolate sauce. They were fried expertly, crisp, crunchy exteriors, with soft insides, and a good coating of cinnamon sugar. Delicious! the one thing I really didn’t like was that while the menu made brief mention of it being three ways, it didn’t say what the three ways were… nor did our server when he brought the dish to us. We only figured it out because BB and I were peering at the dark filling and tasted it a few times before it dawned on us what the very-familiar-tasting item was… since we grew up in Asian households. Someone who hadn’t much experience with chestnut probably wouldn’t have been able to tell what that was.

However, speaking of service – I think Morimoto must have brought over some of his staff from elsewhere. Though the staff were mostly Japanese or Asian, and I’ve dined enough times at Morimoto NYC to know that the staff isn’t all Asian… In any case, service was absolutely fantastic – above and beyond. The place was pretty busy, but our server was very personally attentive to us and our needs the entire time we were there (there was even a huge group of 10-15 people setting up and arriving during our entrees, but he remained attentive). Of course, one of my friends joked that it was because seated in the back as we were, the servers’ station was directly behind my seat, separated by a wall. So the servers tended to cluster behind me, without me realizing it because of the wall, and could hear our conversation easily… and early on in our meal, I remarked that our server was very cute. BB said “way too young!” to which I responded, “too young for what? it’s not like I’m going to take him in the back and f– him!” – before someone pointed out to me this little thing called “the servers are all standing right behind you.” Oops. So our server was super attentive, and someone joked that it was because he only heard part of what I said… Oh well.

While there were no service snafus or hiccups – a very well-trained staff indeed, as even our runners, hostess, and other servers who came by throughout the night were all great – the menu still needs to be worked out a bit. I have no doubt that as time goes on and the menu is smoothed a bit, this will become a very good restaurant in its own right, with menu items that dazzle and make you want to return again and again.

For now, however, my experience was simply promising… a lot of potential, not fully realized. I’d return if someone wanted to go, but I won’t go out of my way to do so.

too new to rate … surprisingly no service issues, despite visiting in the first week of operation; menu needs some work