The day after eating pork buns and ramen at Ma Peche, I went and had… pork buns and ramen at Ippudo. My cousin’s cousin was visiting, and asked me to pick a ramen place; I gave her a list of a few places and she chose Ippudo, which is near a bunch of great shops and fun stuff. We had a blast catching up – can’t wait to see more of her this year 😉

I’ve actually only been to Ippudo twice, and both times for press previews. The wait is always too daunting and while I enjoyed their ramen both times I went, the menu prices seemed rather high considering my then-favorite place was a mere few avenues away, and a good $3 cheaper for a bowl of delicious ramen. Unfortunately, my favorite place has since closed down, so I sucked it up and put our names down for the hour wait around 1pm on a Friday. They have this cool app that takes down your cell phone number and texts you when your table is about to be ready, so that worked out nicely – JKL and I headed to a nearby bar to drink Sapphire and Sprites while waiting for our table, and when I got the text, we walked back just as our table was ready. 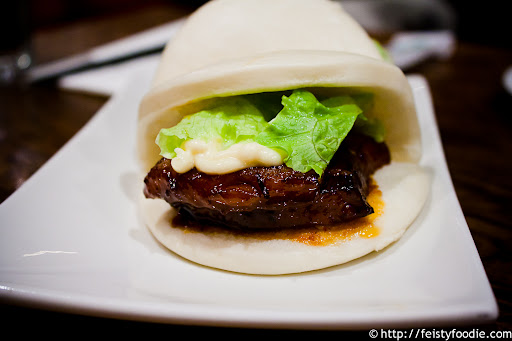 Though I’d just had pork buns the day before, I remembered people raving about the Ippudo pork buns so we split an order of that to start. I’m not going to compare the two, because though they share a concept, the execution is slightly different – to the point where comparison isn’t really necessary. The pork here was again, sticky sweet and tender, with a bit of lettuce and a plop of mayo on top. Overall, the texture was very soft… and normally, I might consider that a negative thing, but it worked here. The sweet chewiness of the pork along with the creaminess of the mayo just made for a delicious bite, and I thoroughly enjoyed my pork bun. 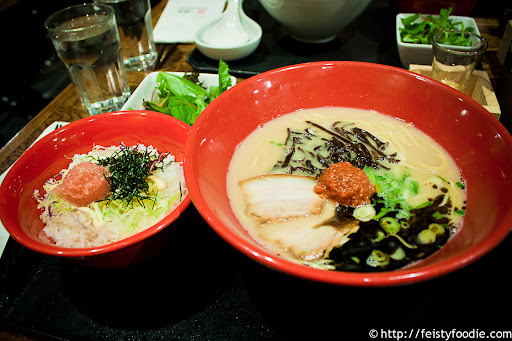 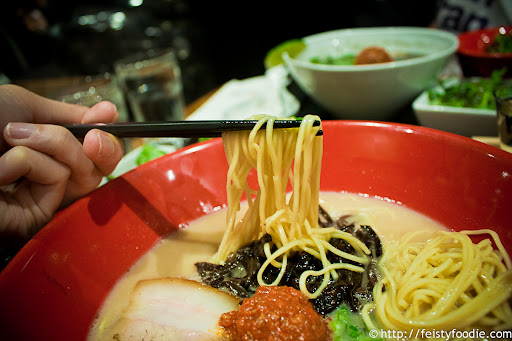 I chose the Akamaru Modern for my lunch, and opted to make it a lunch set for $3 more – which adds on a salad and a rice of my choice. I chose the mentaiko or spicy cod roe rice, which was yummy as I expected (I used to make it myself at home actually… it’s a phenomenal dipping sauce for fries). The salad was just there to make me feel ‘healthy’ (though I ate all of it, of course)… As for the star of the meal, the ramen: freakin’ delicious. The broth was rich, but not so rich I felt like I was eating butter (an issue I had at Totto), while the noodles were perfectly cooked – still a bit of chew to them. The pork was tender, and the miso paste delicious – overall, it was a great bowl of noodles. I still thought it was a bit oily – they actually add oil to the bowl before serving – and my preferred broth style isn’t tonkotsu (pork bone broth), but it’s a solidly delicious bowl of noodles – with a high price tag.

Lunch was a fun time, though it was odd when they started pressuring us to leave. We’d ordered a bottle of sake, and I guess we weren’t drinking fast enough for them as they came over a few times to tell us that people were waiting as 3pm drew nearer (they close for a few hours between lunch and dinner, though I’m sure they could stay open and not hurt for business). They informed us a few times that they could wrap the bottle for us to go, so we finally did so – being unable to finish a 750ml bottle of sake between two girls – but even as we were paying, the server came over a few times to hurry us along. It was weird.

Yvo says: Knowing about their text-when-table-is-almost-ready app, and a nearby bar that charges $6 for a Sapphire & Sprite, I may be more likely to visit when a ramen craving hits than I was previously. The noodles are definitely solid – JKL enjoyed her bowl of the special as well (though it said it was spicy, and decidedly wasn’t) – and the pork buns are delicious – though the prices are kind of high, I think they might be worth it, as long as the wait can be minimized or made to seem little anyway. I enjoyed my experience and I think it’s safe to say I will be back.
recommended (though I still think it’s overhyped)