Then there’s my somewhat out-of-left-field obsession with watching all the football I can. (Like how I used a baseball phrase there? Yeah…) So one Sunday, SFG took me over to The Liberties – diagonally across from Beast & the Hare – to catch part of the 49ers game (hey, I was in SF).

I tried some of their lemonade – which was spiked liberally with vodka – and found it perfectly tasty to imbibe and catch a nice little buzz while watching the game. Of course, drinking leads to snacking… and what goes better with football than wings? 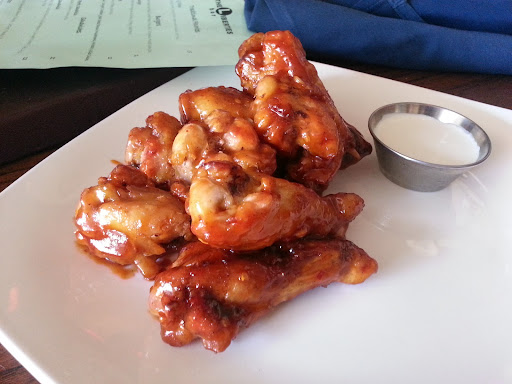 Strangely, though the menu says “hot buffalo wings” the description says they are covered with a sweet BBQ sauce. I found them almost too sticky sweet – while perfectly acceptable as a snack, not hot buffalo wings by a long shot, and not quite what I wanted (though I love BBQ wings). 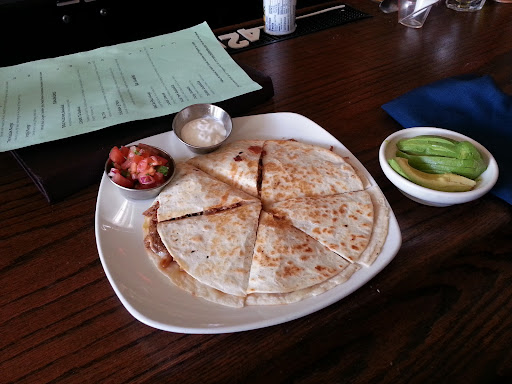 SFG went his own way and got the pulled pork quesadilla, and asked for avocado to be added on the side. I know he enjoyed it – I don’t believe I tried some, as I was pretty full from stuffing my face with the wings – but it looked pretty good. 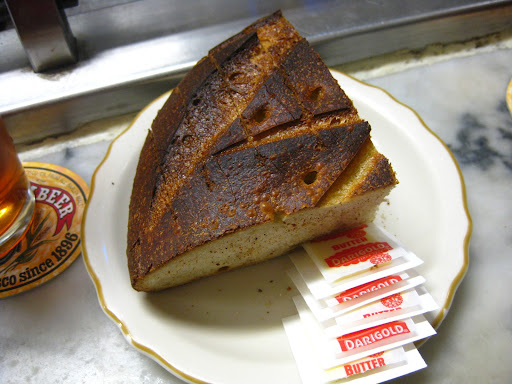 A few days later, we had time on our hands and walked from the Mission all the way to Nob Hill to visit Swan Oyster Depot. I’d wanted to go ever since TT raved about it a few months prior. After waiting a bit – we knew going in there would be a wait, and this one was moderate, not terrible but not quick either – we were seated towards the end of the counter, near where I thought the kitchen was. We were handed this hunk of bread, which we noshed on because we were in a munchy mood but both of us were surprised by how ice cold the bread was. Almost like it’d been refrigerated directly before being given to us. 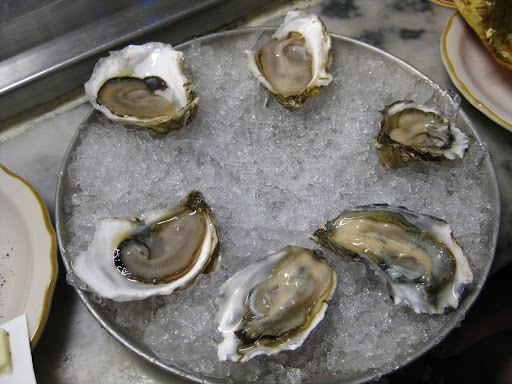 We’d gone to Swan Oyster Depot for just a snack, so we ordered half a dozen oysters. The options that day were Blue Points, Kumamotos and Miyagis. I’d never had Miyagis, I don’t care for Kumamotos, and I get Blue Points back home all the time, which I told SFG, so he decided we should have 3 Blue Points and 3 Miyagis. As I mentioned previously, Miyagis quickly became my new favorite oysters – sweet, meaty, briny, just the perfect combination of what I look for in an oyster. YUM. These were super fresh and I didn’t use any of the side condiments, just enjoyed them in their brilliance alone. 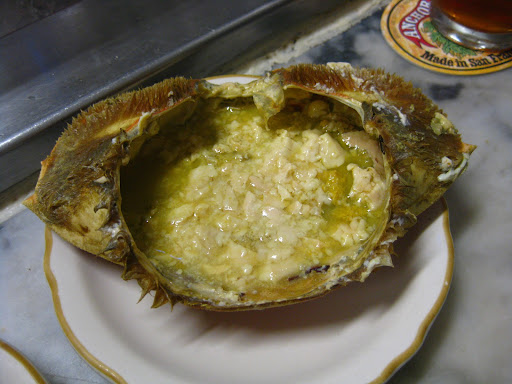 What I was most excited to order, though, is an item not on the menu: crab fat. TT had talked about this, saying it looked like butter in a crab shell – oh I know what this is. This is the crab guts that I happily eat whenever I eat whole crabs. The essence of crab. To me, the very best part, what makes any pasta dish with crab better – when you can use this and “melt” it into the pasta, it just infuses everything with the loveliest taste of crab… awesome.

This, however, was not awesome. This was… also ice cold. If it’d been heated even the slightest bit, the crab flavors would have woken up and shone through nicely, but instead it was just… odd… dipping the bread in there and eating what amounts to goop. This could have been so, so good. I mean, honestly, it’s otherwise garbage for them – if no one orders it, they still sold the rest of the crab for a good price, and lost nothing on this item. At least it was only $6 or $7… 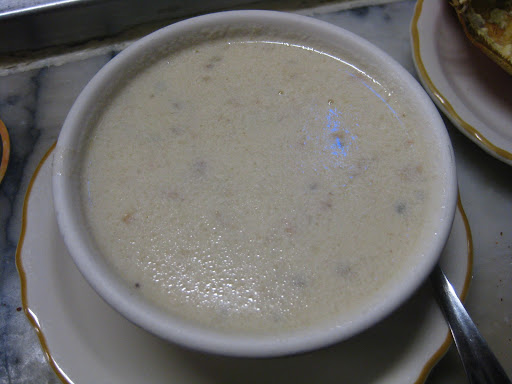 Since I was so cold by this point – it was a rainy day in SF, and we’d waited outside (there’s nowhere to wait inside) for a while to get in – I opted to get clam chowder, which is one of my favorite things to eat. Unfortunately, this fell flat on just about every level: while it wasn’t actually cold, it wasn’t hot by a long shot, and yet the chowder had ‘broken’ – see the fat separated from the cream in the photo? The butter/oil wasn’t blended into the flour/base. It could hardly be called a chowder, either – it was thin, like they’d used skim milk and water. Not good eats. The potatoes were broken inside as well, with hardly any clams of which to speak.

Overall, our experience at Swan Oyster Depot was incredibly disappointing. Perhaps I had too many expectations from TT’s review, but I somehow don’t think so. It was a highly mediocre place – minus the super fresh oysters, but I don’t need to wait an hour plus to get that – and the wait just means I won’t be returning. The best thing about this visit – aside from not needing to return – was discovering Miyagi oysters.

Which I found a few days later at a fish market around the corner from SFG’s for 85c a piece, and SFG knows how to shuck oysters. 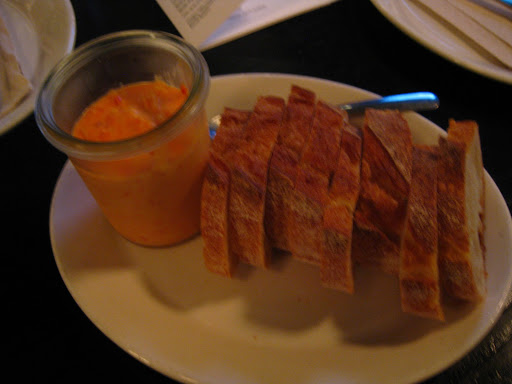 A few days before I finally returned home, we were wandering around and wanted snacks. We landed at Hog & Rocks, “SF’s first ham & oyster bar” – before my visit, SFG mentioned wanting to check the place out with me, so we finally got over there. Our first snack: pimento cheese! After I’d fallen in love with it at Fremont Diner, seeing it on the menu made me squeal, so we ordered that. This version was creamier, and more spreadable as opposed to the thicker, more obviously shredded cheese version at Fremont Diner. Both were good, while I liked the texture of Fremont Diner’s for just spooning into my mouth, while this was definitely something I wanted on bread or chips or something. We inhaled this. 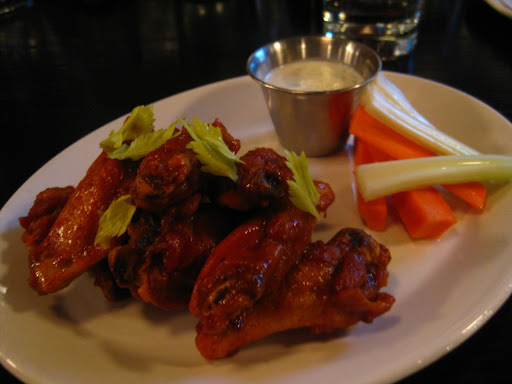 I really like wings, and when I saw these were made with “Youk’s hot sauce” I had to ask the bartender – we sat at the bar – if they were named after anyone, he said no, he didn’t think so, just the house hot sauce. But I later heard another bartender telling him about Kevin Youkilis… which I misunderstood to mean that yeah, it’s named after Kevin, because “Youk” (what people cheer when Youkilis is at bat) isn’t a very common name or nickname. However, a quick Google just now to find out what the relationships between Hog & Rocks to the former Boston Red Sox first baseman is turns up a mention of the chef/owner of Hog & Rocks being his brother, Scott. Haha. (Fun fact: SFG is a BoSox fan. Youk was traded earlier this year to the White Sox, but in the off-season has now become a Yankee. Ooh…)

In any case, these wings were meaty, tender, and bordered on just that shade too spicy for me, though the accompanying blue cheese fixed that right quick. I liked these a lot – I think they even sell the house hot sauce too… 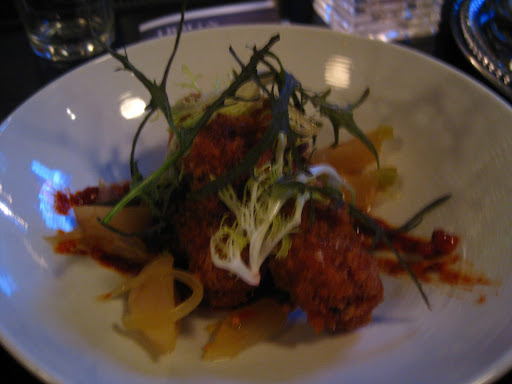 We didn’t go to Hog & Rocks and not order any hog or rocks! I declined ordering any oysters because I’d already discovered the place near us that sold Miyagis for 85c/each, and the oysters here were $2.50+ each, but our final snack were the trotter tots: balls of trotters (pig feet) mixed with potato and deep fried. I thought these were only okay – kind of unmemorable, honestly – with not much going on. I mean, fine for a snack, but not something I’d order again.

A cute little place close enough to SFG that I foresee a return visit – or continuing to explore the rest of the city together, I’m not sure…

Overall, I can see returning to The Liberties and to Hog & Rocks for snacks and drinks, maybe catch a game or two. Swan Oyster Depot is, however, firmly crossed off the list – having visited, I have no desire to return nor to suggest it to anyone as a must-visit.