Back at the end of December, CT & I each bought a Living Social deal for Schnitzel & Things. It was $6 for a sandwich and side, approximately a 50% savings. As I mentioned in the past, I have gotten away from buying “deals” since I usually end up holding on to them for months and then have to make a special effort to redeem them before they expire. Not to mention the fact that they don’t necessarily save you that much money.

However, I decided to buy the deal for the S&T storefront as I had yet to go there since they expanded from their original truck. I had eaten from the truck maybe twice in the past and enjoyed it, but that was a couple of years ago. S&T was actually one of the first trucks to hit the streets in the food truck renaissance that started a few years ago. Whether the jump to an actual storefront is a good idea has yet to be determined.

So almost five months after buying the deal, CT & I stopped in on a recent Saturday evening after watching the Yankees beat the Mariners at the Stadium since the store is very close to Grand Central. There were just a couple of other patrons when we got inside since I believe they do more of a weekday lunch business due to their location. I apologize for the pics ahead of time. They were all taken with my camera. A couple were actually quite good and not too different from a regular P&S.

For my sandwich, I chose the Chicken Schnitzel with the Spicy Sriracha Mayo topping. It came with lettuce and tomatoes on top. As you can see the meat to bread ratio was way off. The schnitzel was the right thickness, so the type of bread used should change. The chicken was crispy, yet pretty dry and a little tough. I thought I heard the counter person say they fry to order, but I’m not so sure. It was a quiet time so the food turnover wasn’t as much as it would be for a lunch crowd. The bread also soaked up most of the mayo, so that didn’t help with the dryness or flavor either. 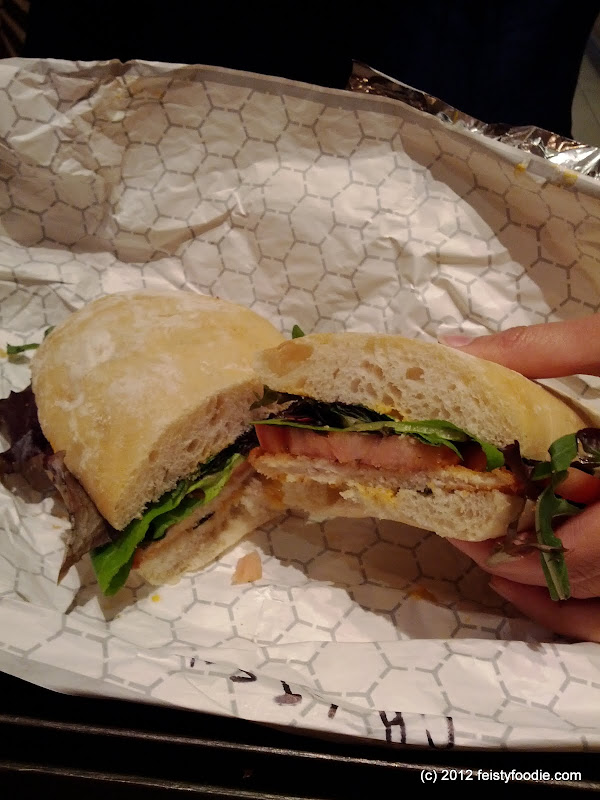 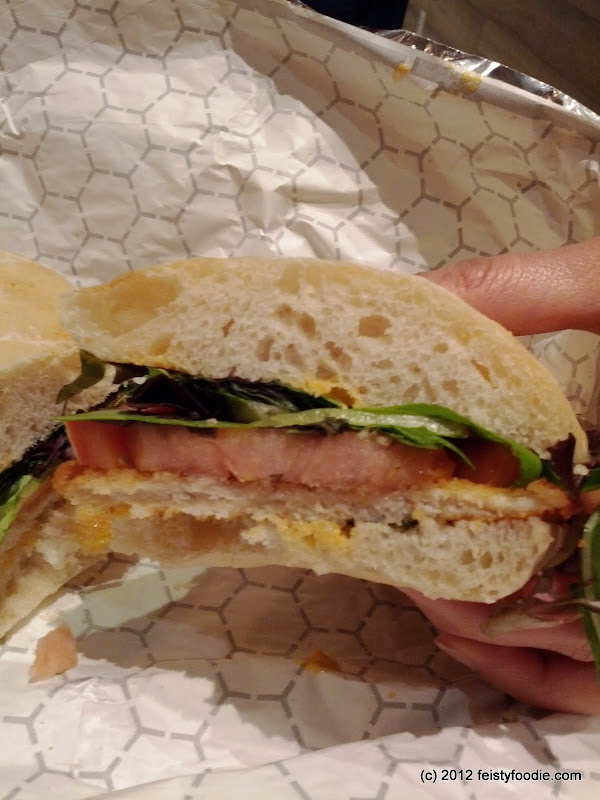 I got the spicy waffle fries as my side. Nothing special, but still tasty. They could have been bit more crispy, but we ate them anyway. 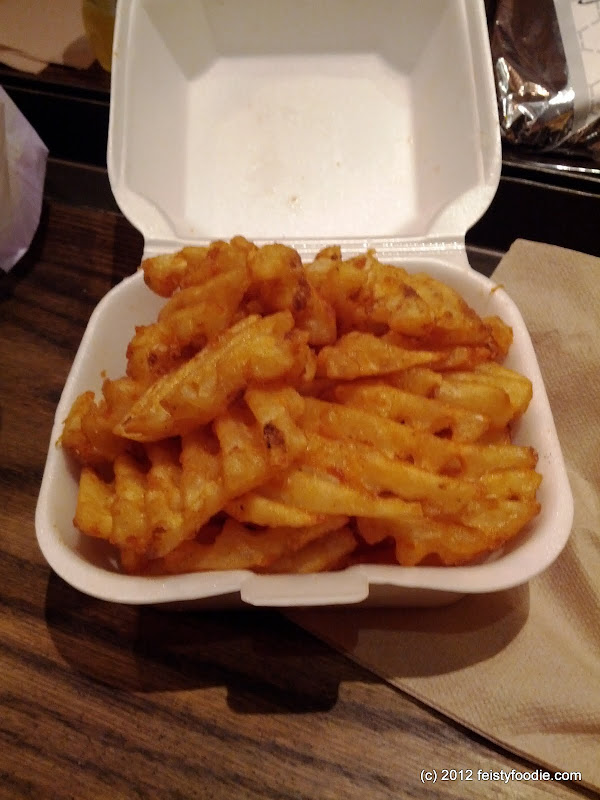 CT chose the Pork Schnitzel with Cranberry Compote topping. She had the same bread issues that I did. We shared sandwiches and I had a pretty difficult time differentiating the pork and chicken. They just had the pretty much the same flavor and texture. 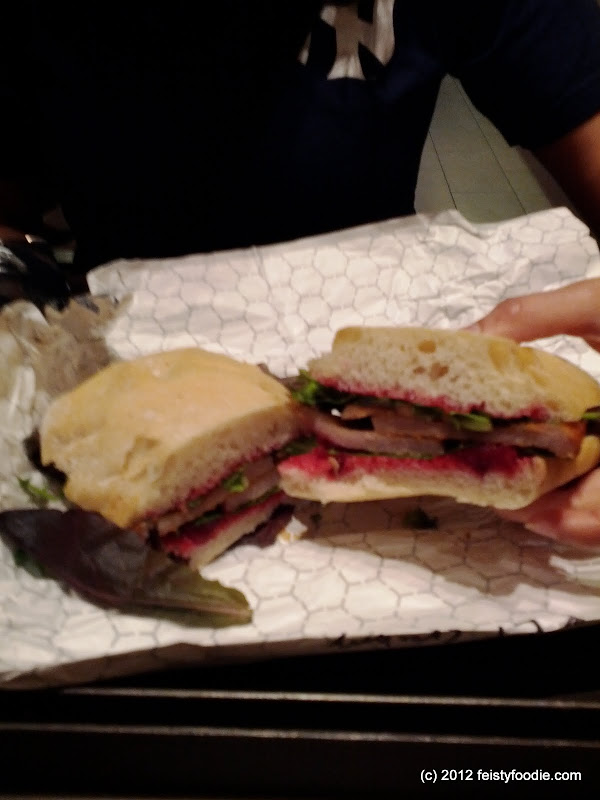 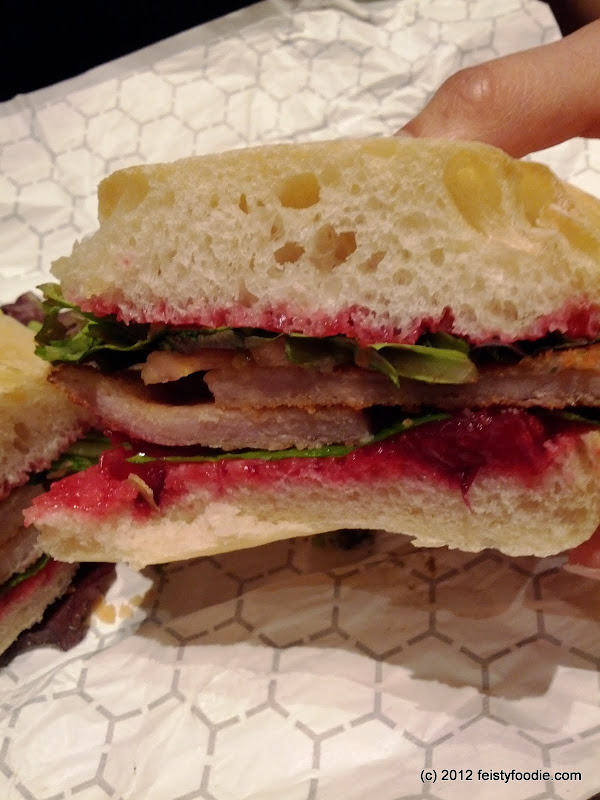 She chose the Austrian Potato Salad as her side. They had a warm potato salad too, but all of the warm sides looked like they were sitting in the chafing dishes for a long time. The portion was quite sizeable, however they went overboard with the garlic and onion. It was too strong even for CT who likes those flavors a lot more than me. 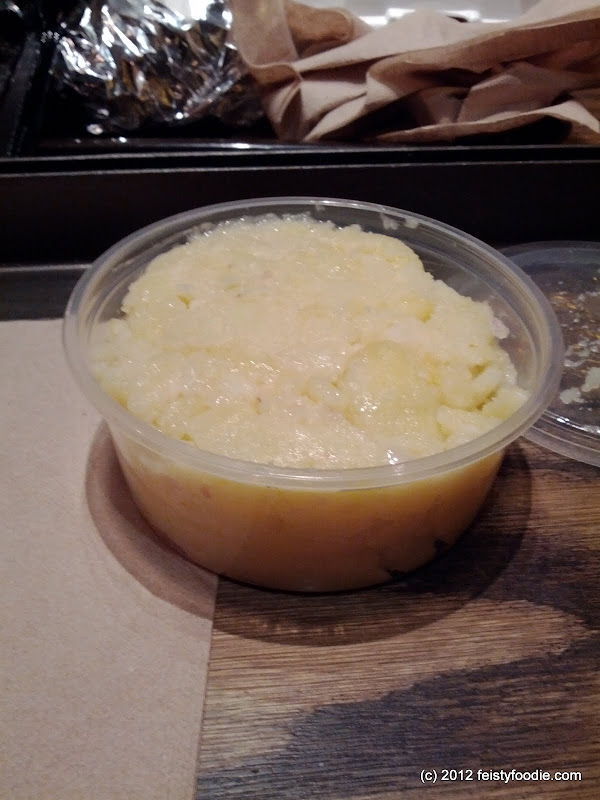 All in all, the Schnitzel & Things store was pretty meh and not as good as our past visits to the truck. Maybe we just picked the wrong time to go? At least we got our food for a discount and have one less deal hanging around our neck like that albatross.