I’ve written about 5 Burro a number of times in the past – but thought I’d dash off another post because I tried something new this time. I met up with Snorlax and FeistyMom one random Saturday afternoon for lunch, and we were seated quickly by the windows. Snorlax was raving about the mussels, so we decided to get that to start… 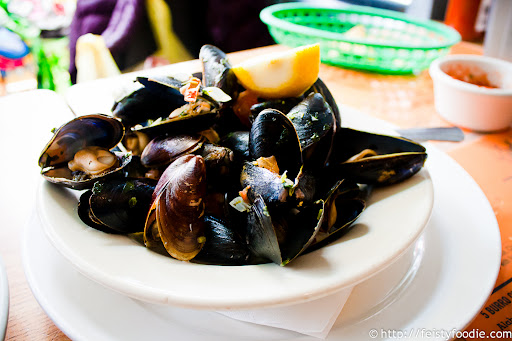 Really observant readers may have noticed that I don’t eat mussels with any regularity. I’m just not a huge fan – and I’ve tried them at many places, but the drying, mealy crumbly texture always puts me off. I’ve had a mussel here or there that was actually quite good but always from someone else’s pot so I never bothered to really re-visit the dish. This time, in front of me as they were, I ate a healthy portion and really enjoyed them. Plump, juicy, well-cooked and really flavorful… I wished for bread to mop up the cooking broth on the bottom. Super tasty, this might just change my mind about mussels.

Funny enough, I’ve been to 5 Burro so many times in the past, as has Snorlax – but never together. He remarked that it’s odd how both of us eat so differently – I would never have thought to order mussels at a Mexican restaurant – but then said it’s good, that way we try more things. Like the next dish… 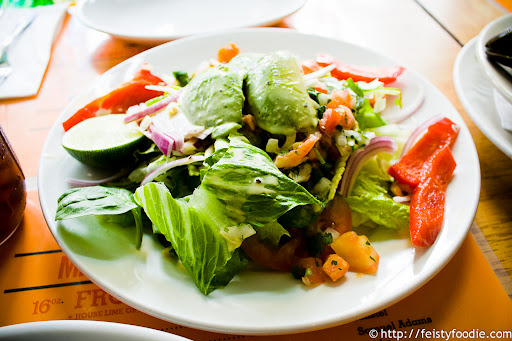 I remembered really enjoying the salad in the past, so though I knew the main dish would be more than enough food for me, I decided to make them eat salad with me and ordered a plain salad (plain as in no meat/protein added). FeistyMom really enjoyed it – sweet bell peppers, crunchy Romaine lettuce, and lightly dressed avocado wedges, along with pico de gallo gracing the entire salad… so good. I enjoyed this and Snorlax agreed that he wouldn’t have thought to order this himself, but was glad I’d done so for him to try. 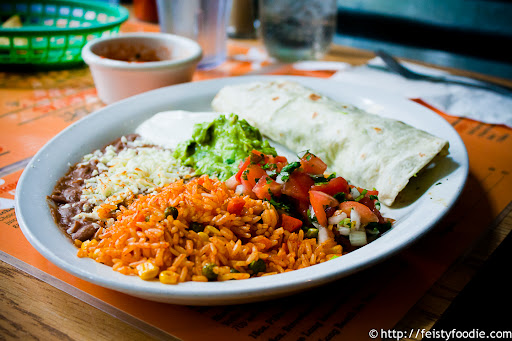 Apparently FeistyMom and Snorlax always get the same thing when they eat here – steak burritos. They both enjoyed them, per usual, and I tried a piece of steak, finding it fragrant and super tender. 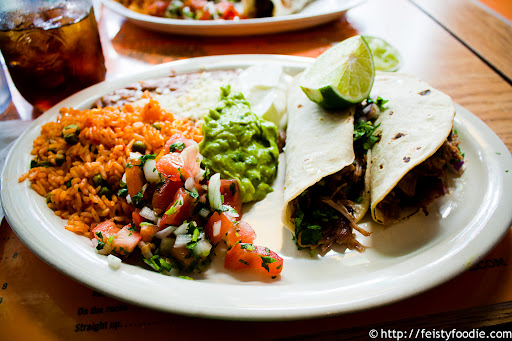 However, I can never pass up ‘tasty pork’ or pork al pastor at 5 Burro. With the texture of pulled pork, super juicy but mixed through with cilantro and raw onions (both items that I really enjoy), this was the perfect bite. Snorlax tried some and was impressed and thought he might try ordering this sometimes in the future. I mean, I even had it like a taco this time (I usually just eat the meat part, haha) – it was so good, flavorful and just awesome. I have never been disappointed with that pork. YUM.

I don’t need a summary, do I? I really like this place, and I think you should check it out if you haven’t already. I’ve heard some varying negative comments from the last time I posted about it, but I can’t imagine – one was a complaint about service/the owner being rude to them, which is odd because she’s always lovely to me (and she doesn’t know who I am, though she’s reached out to thank me for my positive reviews in the past)… and the other was about cleanliness, but it seemed like an anomaly as opposed to the norm.

I also want to mention that while we were eating, the jewelry store next door was robbed. As the robber(s) rushed out of the store, they knocked over a young woman who was visibly shaken up. The entire 5 Burro staff went outside to check on her and see if she was OK, offering her water and asking her to come sit inside while she waited for the cops to come so she could give a statement. We left before the wind up, but the service was incredibly caring for her well-being, and even so, we were not ignored.

In any case, 5 Burro is good stuff and good people.