I was recently invited to an event showcasing the newest goodies from Petrossian’s bakery. Petrossian is known for its caviar, posh digs, and amazing foie gras, but I’d no idea the cafe next door was just as amazing. (Though I once was the super lucky friend of someone who received a lavish gift basket from Petrossian, post-triple-bypass surgery… and that someone, being a very unadventurous diner and not knowing what half the stuff in there was, let me take everything I felt like. Hello fancy fleur de sel caramel and miel de grece (Greek honey)!) 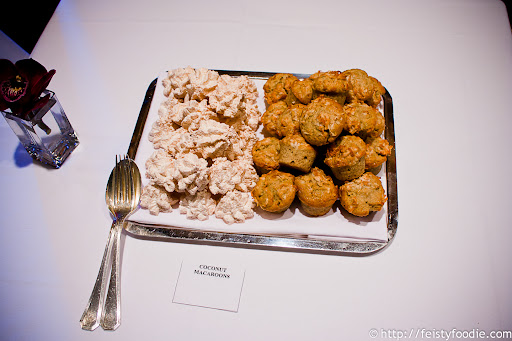 Coconut macaroons, which, if you know me at all, you know I didn’t risk sampling. However, darling Sarah – my date for the day – did, and her opinion on all can be found here. 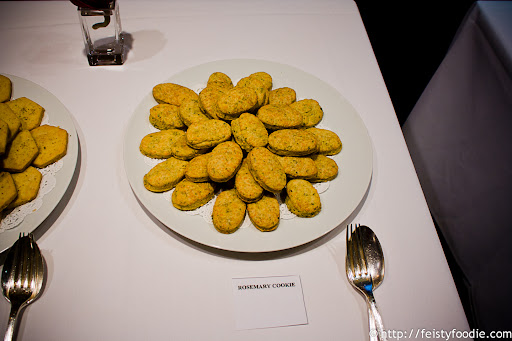 These rosemary cookies, though, were mine – and the texture was just incredible. Crisp edged with an almost cakey center, I enjoyed this very much, especially given that a lot of restraint was shown with the rosemary addition and I’m sensitive to too much rosemary. Mmm… and the cookie I somehow didn’t photograph clearly, a fennel one that I also enjoyed… but the rosemary one had my heart. 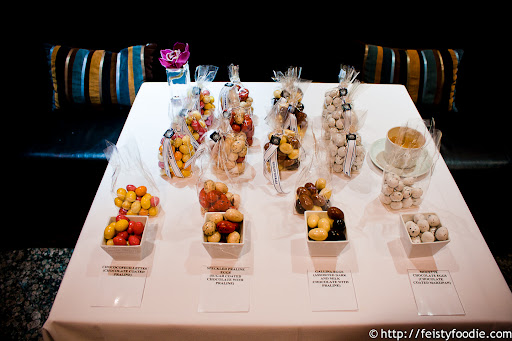 We were also treated to lovely bites of candy and chocolate coated marzipan, which was not like any marzipan I’ve had in the past. Yummy crunchy bites! 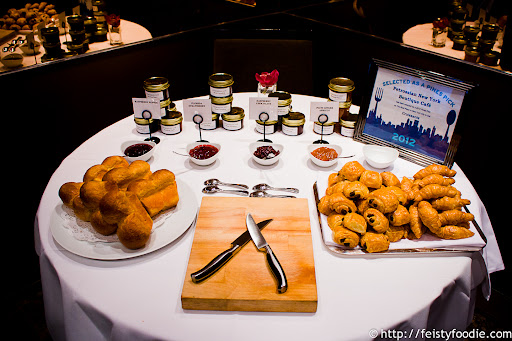 We also sampled Sunchowder jams, which were eye opening and simply amazing. While describing the business relationship he’d formed with the woman who created Sunchowder (and who grows all her own fruit to make the jams herself!), Mr. Petrossian’s face lit up with such child-like wonder, it was awesome. And the jams themselves – the strawberry one in particular – all natural, no preservatives, delicious. 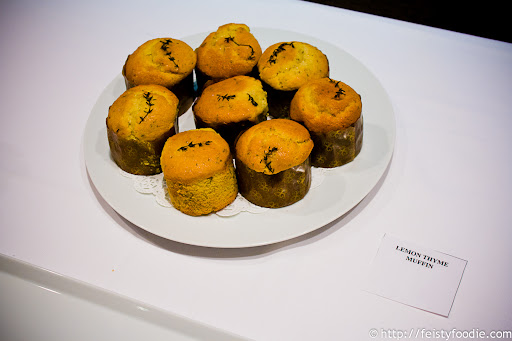 These lemon thyme muffins were a huge hit with Sarah. I couldn’t decide if I wanted them to be sweeter or saltier, so I left it to fate. 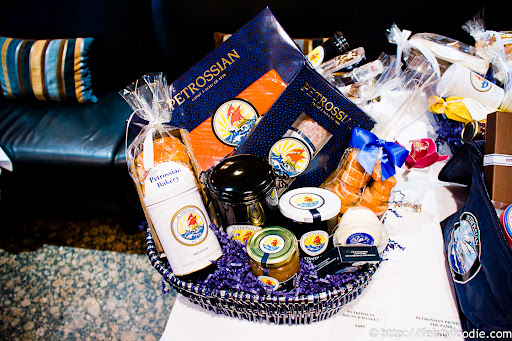 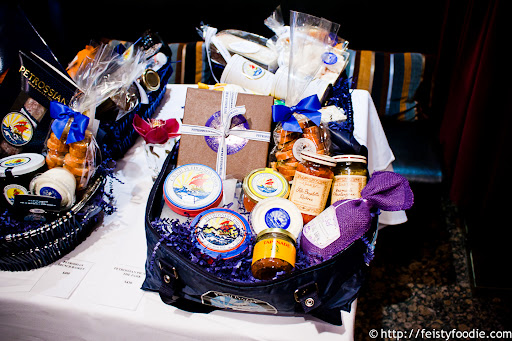 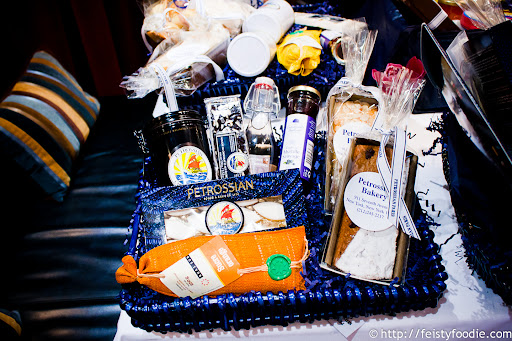 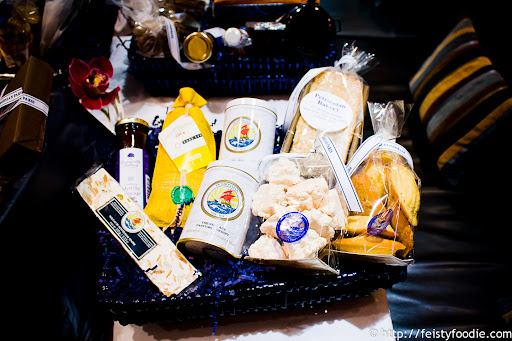 These are a few of the baskets available for purchase at Petrossian – some are designed especially for a picnic in nearby Central Park. A nice romantic time with caviar and other goodies from Petrossian? Don’t mind if I do! 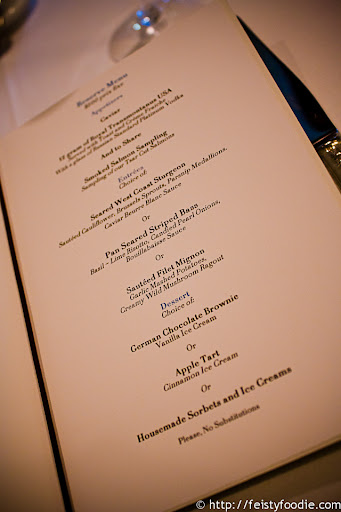 Coincidentally, before I’d been invited to the event, I’d purchased a Groupon for a 4 course meal at Petrossian – even more coincidentally, my reservation was for the following night. 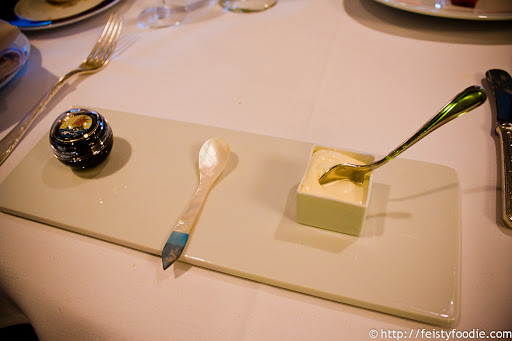 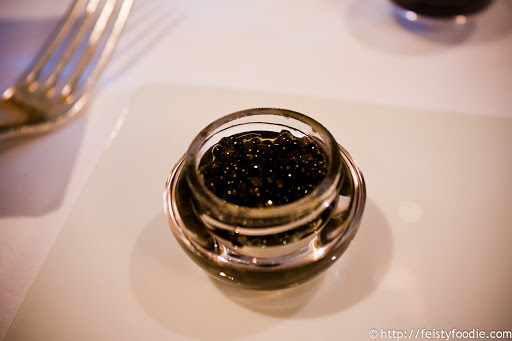 The menu began with  30 grams of caviar and creme fraiche. Funny enough, when I’d first emailed DLS to ask if he wanted to accompany me, he’d said he didn’t know if he liked caviar, not having had it very often. I graciously offered to eat his portion if he didn’t like it (though we’ve obviously had caviar together a few times at the high end restaurants where we’ve dined), though sadly, he realized he enjoyed it and I was given no extra. Boo.

Granted, I’ve not eaten caviar like so very often in restaurants, but I’ve had enough experiences to enjoy the smear of briny caviar across a slice of perfect toast point with um, a lot of creme fraiche to match the brininess. Mmm. 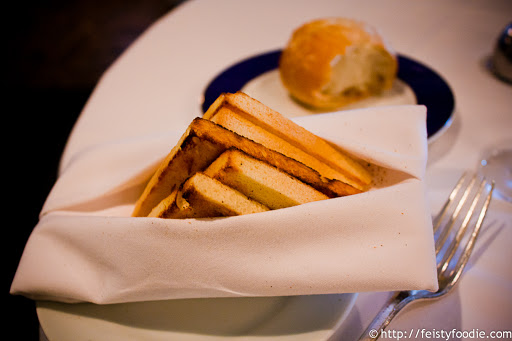 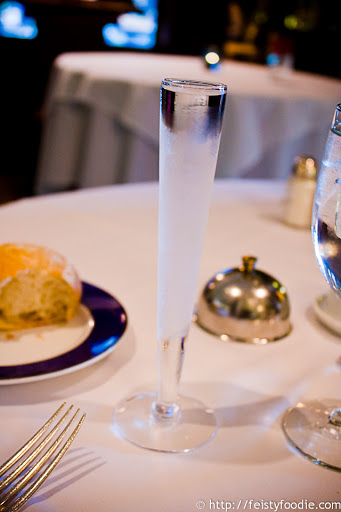 To complete the experience, our toast points of course – which were refilled without hesitation as they were finished – and a tall glass of premium Russian vodka.  I cannot emphasize enough how delicious the caviar was – perfectly fresh, not fishy or stinky like some people seem to think caviar is, and just the perfect sized portion. Sure, initially I thought “that’s 30 grams?” (I was brought up on the standard system, not metric!) but when I finished, I thought, “That was just right.” 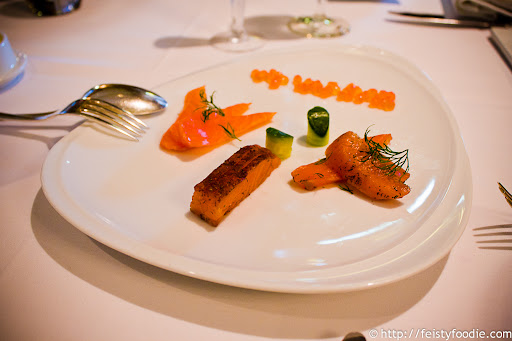 Next came our salmon sampler. Unfortunately, I had trouble understanding which was which (aside from the roe), but know that each piece was incredibly tender, some were creamy in texture, and glorious tasting. I wasn’t a fan of the bottom middle one – spiced like a slice of pastrami – but it has its place in a sandwich, I’m sure, just not eaten plain as I was doing 😉 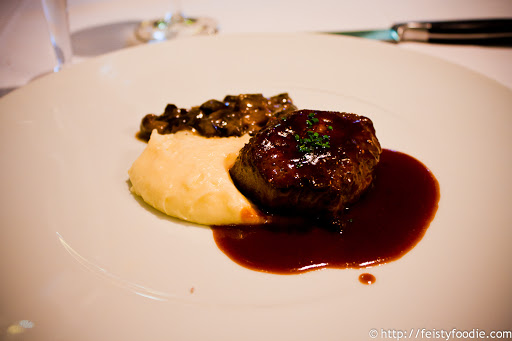 Next came our entrees. Initially, DLS was eyeing the pan-seared striped bass, but backed off when I corrected him that striped bass and bass are not the same fish. He chose the sauteed filet mignon with garlic mashed potatoes and creamy wild mushroom ragout instead.  Though I failed to take a photo of it, he cut me a piece and it was cooked exactly to his specification of medium rare. I know he enjoyed this dish thoroughly – as much as he loves mushrooms – and I can’t say that I didn’t enjoy my piece of steak! 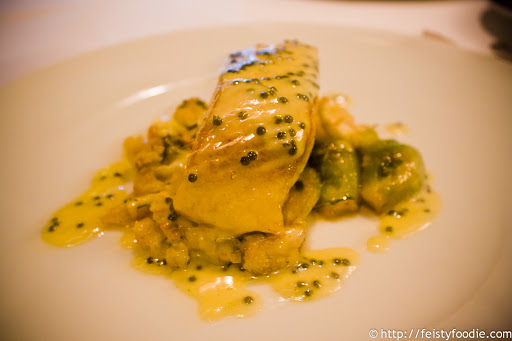 As for my poorly-photographed dish, I chose seared West Coast sturgeon with sauteed cauliflower, brussels sprouts, parsnip medallions and caviar beurre blanc.  The fish was cooked perfectly as well – not quite fully cooked, retaining its tender sweetness, with the caviar beurre blanc just melting against my tongue to create the perfect bite. The vegetables were also cooked just right, retaining texture but not a hint of bitterness from the cruciferous veggies… just lovely, absolutely lovely. 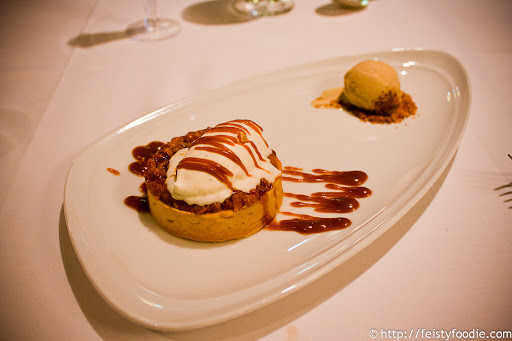 I had no idea how I could stuff dessert in my mouth, but onwards we trooped. DLS again was swayed from his original choice by me, again unintentionally – I hadn’t noticed there was a third dessert option, so I presumed he would order the apple tart with cinnamon ice cream. He did so, then told me he’d intended to order the housemade ice cream or sorbet. *snore* What? Who’s boring? Not me… In any case, without question, this dessert was major WIN.  A crisp pastry crust filled with apples, topped with streusel, I was extremely jealous of his plate and ate a few bites before forcing my attention away and back to my own dessert. 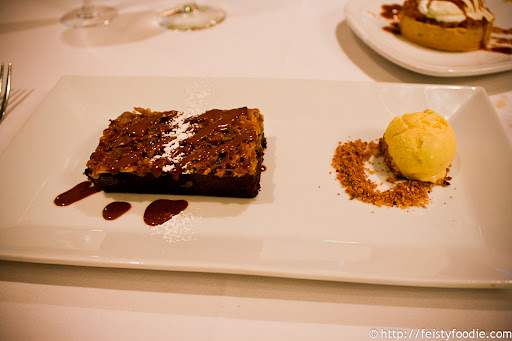 Sadly, I consistently forget an important fact of life. My German chocolate brownie with vanilla ice cream was wonderfully chewy, moist – almost like a brownie on top with a cake bottom – and wait, what’s this shredded, papery stuff on top of the brownie – oh crap, German chocolate means coconut, doesn’t it?  In my defense, there are no coconuts in Germany, and I never associate Germany with coconuts. Why would I? (For those new here, I’m fairly allergic to coconut, particularly shredded coconut.)  So I had to stop eating – and DLS agreed that his dessert was still better, so instead of trading, I contented myself with just eating my ice cream. Sadface. But the brownie that I did eat was pretty good – I just wish there was no coconut on it…

Yvo says: Overall, a fantastic meal at Petrossian that we both enjoyed very much. I checked the menu after I bought the deal, and it’s actually not THAT cost prohibitive to dine there for a nice occasion, so definitely give it a try if you can. It was worth it.
recommended

Please note that I attended the first portion – the tasting of baked goods – courtesy of the PR firm for Petrossian. However, the latter portion – regarding dinner – was paid for by me and we received no special treatment, so there’s no bias possible! Not that I’m ever biased, of course. I received no monetary compensation to post about the beginning part, nor was I obligated to do so.