I was recently alerted to the existence of a fairly cool concept made real: group dining made easy via the internet, aka gDine. Essentially, when you’re planning a group outing, just choose your restaurant and have people go to the website and pay for their own meal upfront. No more trying to calculate the bill at the end, with some people drinking and some people not, and some people saying “Oh I forgot to bring cash” or anything silly like that. (Admittedly, my friends don’t seem to have this problem, but we’ve also been dining together for well over 10 years…) The fun part of gDine is that special menus are included at great prices, so you’re also getting a great deal.

gDine invited me to experience this for myself, so I headed to Bobby Van’s (on 54th Street), where $45 (pre-tax/tip) allowed me a 3 course meal for dinner. If you’re at all familiar with steakhouse prices in NYC, you know that this is quite a deal.

I’ve talked about Bobby Van’s in the past (okay, a totally hilarious review, but whatever), and this is less about the food than the website… so a few points. While I love the concept, there are definitely some things that need finessing. I had a 6pm reservation that I unexpectedly had to change; the website does not make this possible nor easy. I wound up calling Bobby Van’s, who didn’t have my reservation in their normal book (or they use OpenTable? I’m not sure), so I had to explain three or four times before the reservationist handed the phone over to the manager, who knew what I was talking about and fixed my reservation.  (The reservationist told me that she didn’t see my reservation, but could make me a new one for that night, no problem. While normally that would be acceptable, as the meal was pre-paid, this would certainly lead to an issue later when I showed up for dinner.)  Granted, this was apparently Day 2 of them being on gDine, as I found out later. 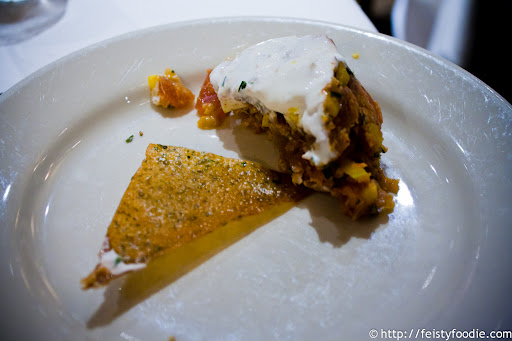 Tuna tartare, which, if you look at the gDine website’s menu, is not on the Bobby Van’s menu. (And was overly gingery, to mask the unfresh tuna used for this dish.)

Littleneck clams, which are listed as ‘steamed’ on gDine’s website.

Filet mignon, which was cooked past the requested medium rare. 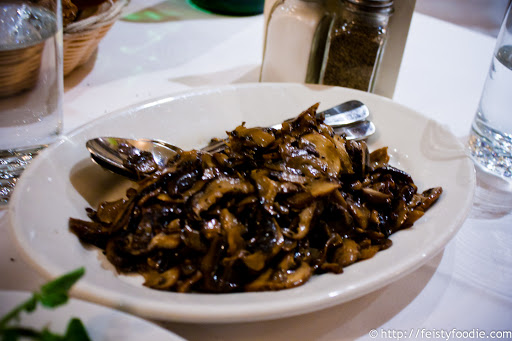 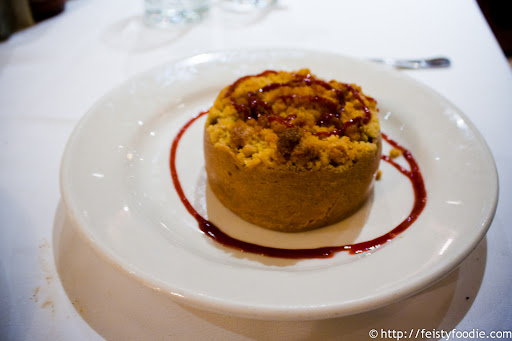 Apple cake which was soggy and not particularly tasty. 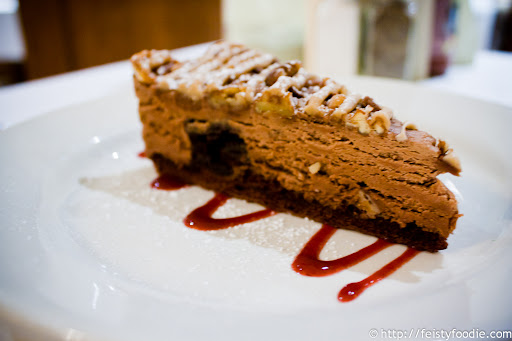 Pecan and caramel fudge cake, which was okay.

While our server was incredibly nice and provided very good service, he was also completely unfamiliar with the gDine program. I find this to be a failing on Bobby Van’s management’s part – failure to properly train or familiarize staff with a new menu that they offer – but it should be explained to the staff so they know how to handle questions. We had a lot, as the menu we were given at Bobby Van’s did NOT match the one on gDine’s website; escargot is listed on the website menu but wasn’t on the paper menu at Bobby Van’s, to my disappointment. There was also the added section of ‘sides to share’ at the restaurant, so when we asked our server what exactly was included in our menu, he didn’t know and told us to just order as we pleased. I felt extremely guilty as in the end, I felt that we’d definitely ordered more than we were really entitled to receive.  (Two appetizers, two main courses, two side dishes, two desserts, and a bottle of Pellegrino.)

Essentially, I think this is a great program and unique concept that will really change how group dining takes place in NYC. There is room for improvement, but the program is extremely new, so that’s to be expected. As more restaurants work with gDine to bring an excellent group dining experience to everyone, I foresee gDine being the next big thing in group dining – forget paying each other via smartphone. Pay the merchant directly!

My notes in a nutshell:

Our server actually presented us with a bill that listed our meal with prices (we were charged $45/each), but the manager rushed over and grabbed it from him, crumpling up our bill as he went.  He explained that their participation with gDine was incredibly new – this was only the second day that they started taking reservations via gDine, actually (this was April 2nd), but he seemed happy that apparently there was already a decent amount of interest, informing us that while we were the first gDine diners so far, they already had a few more reservations for that week and more for the following week. It seems as though this is a great program for restaurants to become involved with, as it certainly brings more diners their way.  As it was only the second day (and we were the first gDiners they’d had), obviously I expect them to work out the kinks as they go along, though these are the notes I had for them.

Overall, I recommend gDine not just for a meal-deal – I only went to dinner with one other person, and $45/for a 3 course steakhouse meal is pretty unbeatable – but for your group dining needs, especially if you’ve had one too many headaches from attempting to split the bill at the end of a large group meal.  I’m sure as time goes on, the issues I had will be addressed and/or worked out, but definitely check them out and give them a try!

Please note that I received this meal courtesy of gDine; Bobby Van’s did not know who I was other than a gDiner [ie, they did not know I would be writing about the experience]. I was not obligated to post about my experience, positively or negatively, and do so freely.