A couple weeks ago, we headed to South Jersey for a friend’s son’s first birthday party. After we had our fill of Elmo and Cookie Monster, we headed back up north to drop off my Dad’s car (who graciously let us borrow it.) Before heading back to NYC, my parents took us out to dinner to one of their favorite restaurants of the moment. Bistro 18 in Montclair, New Jersey was a small, cozy “New American” restaurant right in the heart of the hip town that Stephen Colbert calls home.

After being seated, bread service included some eggplant caponata. I am not a fan of that kind of spread, so I passed. I believe CT mentioned that it was way too sweet. 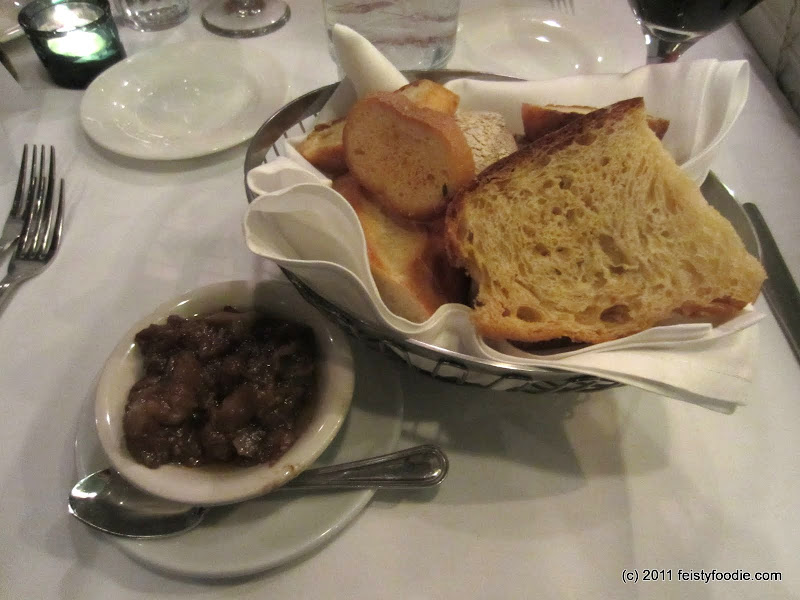 CT says: Not too sweet, but sweeter than expected. Probably not something I would order myself, but I still took a few swipes with my bread. I think it’s nice when a place offers more than the standard butter or olive oil.

CT and I decided to share an appetizer since we had a late lunch at the party and were having an “early” dinner with the parents. One of the special appetizers sounded very intriguing. Grilled calamari, New Zealand cockles, PEI mussels over cannellini beans and parsley-garlic drizzle. I think it was around $14, not sure. I remember reading that cockles are becoming quite popular in the States. They were small clams that I originally thought were snails. It was quite a large portion, plenty for the both of us. Unfortunately, the seasoning was lacking. 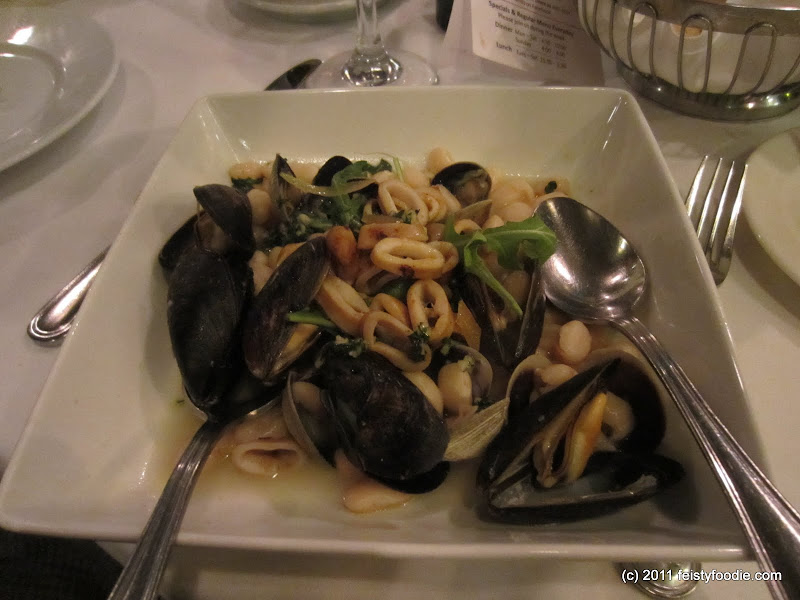 CT say: Agreed – the seafood was cooked well, but the broth was a little lacking.

My parents decided to split a salad. Arugula, fennel, beets & crumbled goat cheese with honey balsamic vinaigrette ($11). Note that the kitchen split the salad for them, so this was one plate. Quite a sizable salad. I believe my parents both enjoyed their salads a lot. 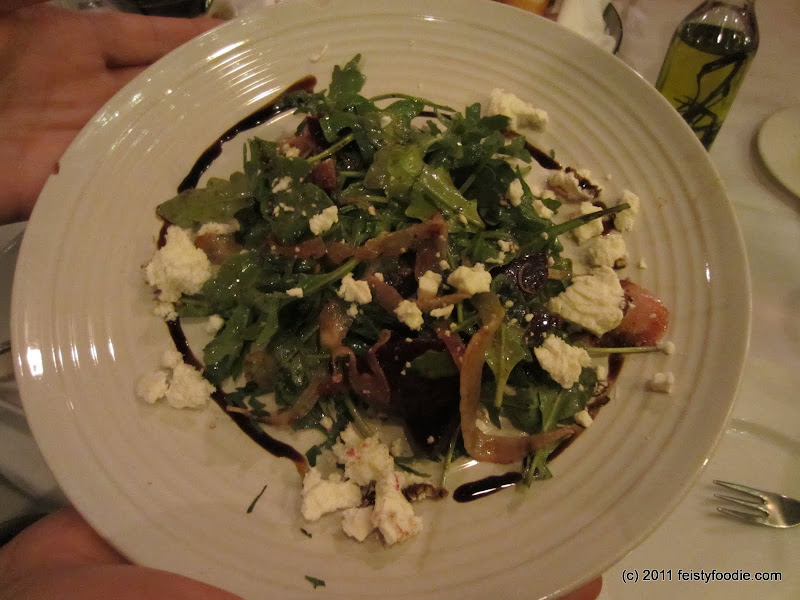 Mom got the “Braised lamb osso bucco with English pea risotto, sautéed spinach and toasted pine nuts in a gorgonzola demi glace” ($29). I had a small taste and it was pretty good. Super tender meat. 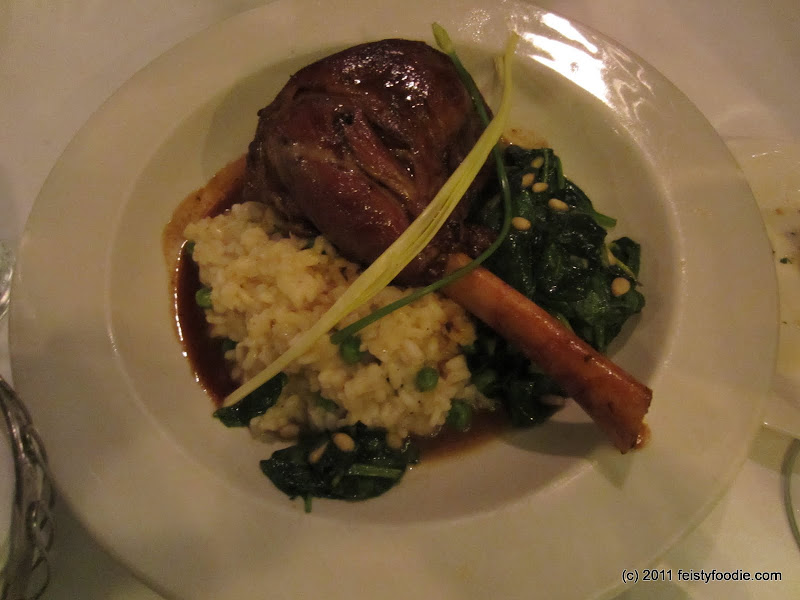 CT had the “Pan seared wasabi crusted yellow fin tuna over bok choy (this quality of tuna will only be served rare)” ($28). We both appreciated that the menu stated that the tuna will only be served rare. It is sad that some people would actually want to eat tuna that was cooked through. As you can see, the tuna was very lightly seared since it had such a small cooked edge. I had a taste and enjoyed the super fresh tuna with the double hit of wasabi from the crust and the extra on the side. 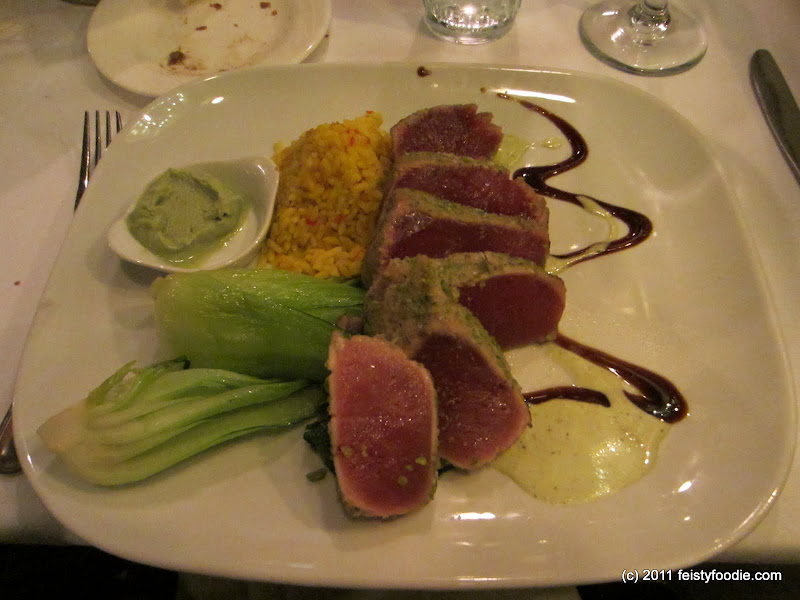 CT says: I loved this dish! It was cooked so perfectly and had a delicious wasabi crust that just gave a tiny little puppy-bite of heat, not too much for the average consumer. However, it was appreciated that there was a dollop of extra wasabi on the side to take it up a notch if one so desired, which I did… but just a little. I also liked the side of bok choy, which was very simply steamed, but worked with the lightness of the tuna. My issue with a lot of restaurants if you order something like fish with veggies to (try to) be healthy, only to discover one or both soaked in butter or oil. Here, I could enjoy the dish and feel really good about it.

My Dad and I each ordered the “Char-grilled pork sirloin with lobster whipped potatoes in a wild mushroom chianti reduction” ($26). At first, I wondered where the pork was, but it was hidden underneath the mushrooms. Kind of an odd presentation and I don’t know what purpose that green stalk served. The pork was cooked perfectly, but again the overall dish lacked seasoning. The flavors were muted; I wish the sauce added more to the dish. The lobster whipped potatoes had a pretty good amount of lobster chunks in it (you can see one piece on the bottom of the picture), which was impressive. It was a large plate that even I couldn’t finish. 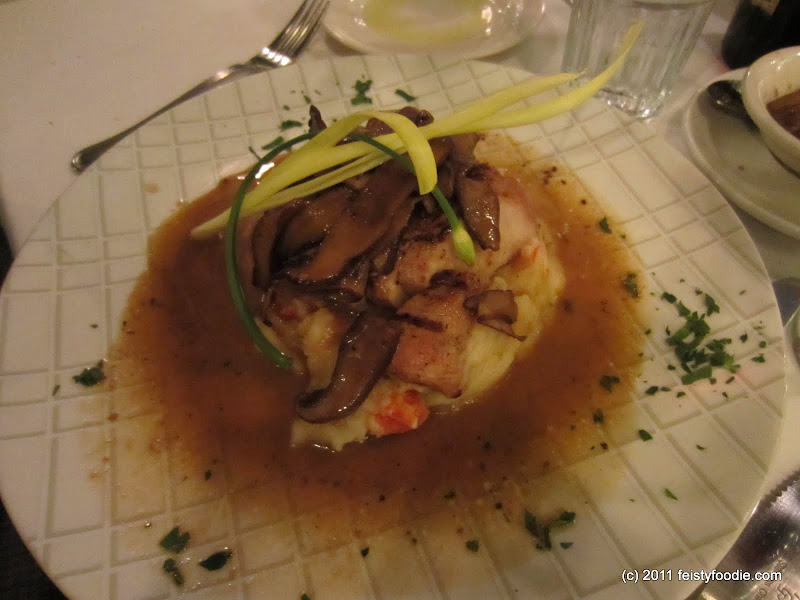 All in all, it was a nice dinner in a cute and hip town in New Jersey, but the food was missing seasoning. Everything was cooked nicely, but needed more flavor. Service was very friendly and as with most NJ restaurants it was BYOB. Thanks for dinner Mom & Dad and giving us a ride back to civilization.