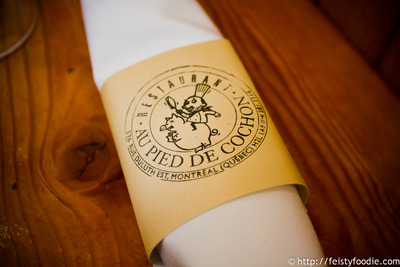 When it was first decided that DLS and I were going to Montreal, there was only one place I wanted to visit.  I first heard of this place in 2008 through this blog post – and it stuck in my head since then.  I don’t even know what, exactly, in that post made me want to eat here desperately, but whenever Montreal has been suggested to me, I’ve thought of Au Pied de Cochon.  DLS made reservations for our last evening in Montreal, and though I felt a little sick after overindulging (bagels, poutine, deli sandwiches, and then snacks in the hotel room while watching the Giants beat the Packers to reach the next round…), I’m nothing if not a trooper.  I got out of bed and put my game face – and my game stomach – on, and we headed to the charming restaurant with its interior decorated almost entirely in wood. 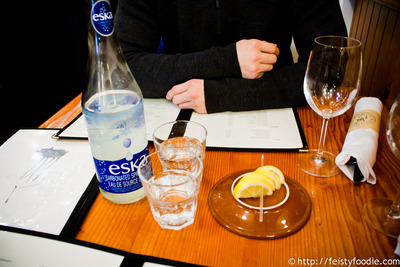 To help aid in digestion – and just because I like sparkling water – we ordered a bottle of sparkling water.  Pro tip: did you know carbonation aids in digestion?  It also makes you feel full, though, so if you’re trying to lose weight, drinking lots of seltzer helps you stay un-hungry.  Did you ever think you’d get a diet tip on my blog?  Haha.  I really liked that they gave us a plate of lemon slices too.  It’s the little touches… 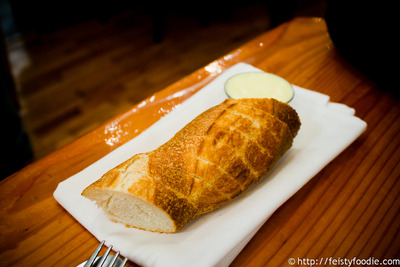 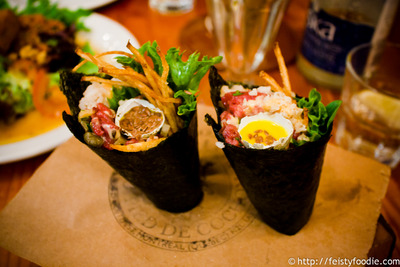 DLS chose the beef tartare to start.  We were both surprised when it came as sushi-style hand rolls.  There were quail egg shells in each, that we were told to pour over the meat and then eat.  It’s safe to say we both really enjoyed this dish – I loved the rice as the carb, with the creaminess of the egg yolk, the tender meat, and the crunch of the potato sticks, the seaweed to hold everything together.  I really enjoyed the innovation at play here, with the overall creativity working well to make a happy bite.  (DLS asked me before it arrived what I thought the difference between the tartare as appetizer versus the regular dish, which cost double. I said probably just size, but after seeing this as the appetizer, I’m not sure if it’s presented entirely differently perhaps?) 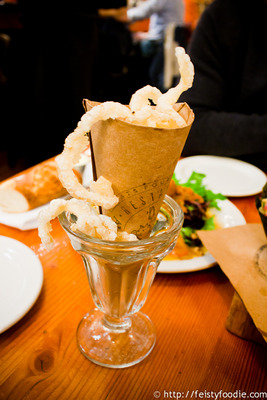 Really, just because I could, I ordered pork rinds.  I was a little disappointed there wasn’t more creativity here, but they were tasty, salty, airy bits of pork skin, deep fried.  No complaints here about the taste. 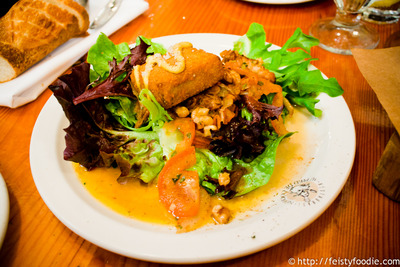 Because I knew our meal was going to be decadent, rich and heavy, I wanted to start with a salad, but chose poorly: the crispy PDC salad.  Since there are no descriptions on the menu, I ordered somewhat blindly.  We were both a little squicked that the entire salad was warm, first… but the nuts were crunchy, and initially very nice with the lettuce (which I ate quickly, ha, as it wilted from the hot toppings).  Neither of us much liked the headcheese served with it, though I found the flavors of the warm vinaigrette perfectly tasty – just too much overall.  There was a lot of pork fat going on already.  I worried that I’d be unable to eat much more. 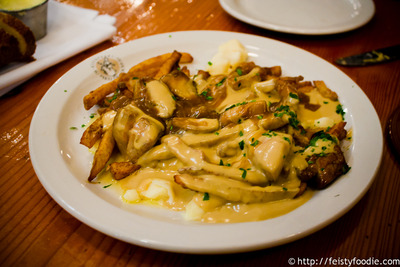 Without question, we ordered poutine.  But… despite DLS’s realization that he prefers classic poutine, he couldn’t resist the foie gras poutine, stating, “I really like foie gras.”  You knew there must be some reason I liked him, right?  There you go.  The serving actually isn’t that large, though the price is more than 3x the price of their regular poutine – but I think that’s a good thing.  The gravy was unlike the standard brown gravy we found on every other poutine we’d had in Montreal; it was creamy, rich, and probably infused with extra fat, or so it tasted.  The foie gras had been cut into pieces and tossed with the fries, like so many cheese curds, and while I found the combination intoxicating, I also found it completely unnecessary.  I’ll take my foie infusion another way, please!  Disturbingly, I did eat only a few bites before pushing the plate towards DLS and declaring, “I don’t want anymore; you finish it” – and he did.  Oh, he did.  I might add that this was definitely not the best poutine we’d eaten in Montreal – the frites quickly became soggy under so much gravy, and given the classic poutine with rich brown gravy, cheese curds, and perfectly crisp frites as the standard, this one did not hit high marks in all categories.  However, taken on its own – frites topped with rich, creamy gravy, cheese curds and bites of foie gras – it was delicious.

I would not order that again, if I return with only one other person. 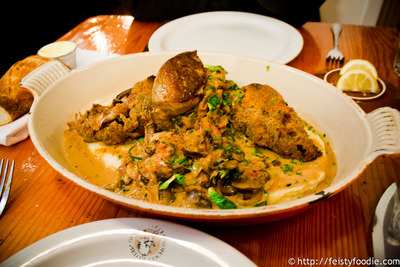 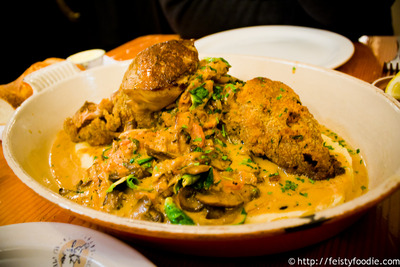 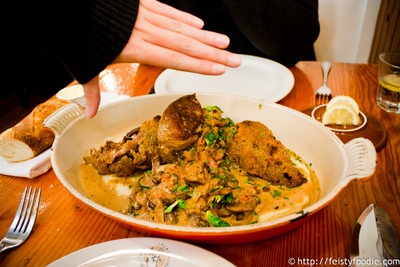 And then there was our final dish.  This caused a lot of debate between us: at a restaurant named Au Pied de Cochon, do you not order pied de cochon?  Knowing full well that both of us are not the biggest fan of trotter/pig feet, we hesitated and finally decided that yes, we would order the pied de cochon, stuffed with foie gras.  No, we hadn’t had our fill of foie gras just yet!  Our server informed us that this was a huge dish, and plenty for two people to share.  Though we both were wary of not enjoying trotter, we decided what the heck, we won’t be back for a long time … Do you understand the scale of how big this dish turned out to be?  It was pretty much the shank of a pig.  Whoa.  We basically picked at it and then I clutched my belly and cried, so we packed it up to go – and I brought it back to NYC to finish.  (I had a cooler, plus the trunk stayed really cold during our drive back.)

But the dish itself: no, it didn’t change our minds on how much we like or don’t like trotter.  I don’t like cartilage all that much – the gelatinous nature doesn’t do it for me.  However, the pieces of meat that fell off the bone – deliciously tender, meaty, and the bottom of the plate was covered in a super cheesy polenta mixture, along with some brussels sprouts (which I adore)… and while the piece of foie gras was entirely gilding the super rich lily, I enjoyed eating it.  Since I took most of this home with me, I took my time eating the rest of it that I could, then I made stock from the bones.  Haha, yes I did.  It’s in the freezer enjoying some chill time until I figure out what to do with it…

Yvo says: As our one ‘fancy’ meal in Montreal, I think this was a fantastic pick.  I definitely want to return and try more menu items – maybe even their super gimmicky, super famous duck-in-a-can.  I also want to return with more people in tow so we can take down nearly the entire menu and not feel disgustingly gross afterwards… or maybe we will anyway, but at least we’ll have eaten most of the menu!
highly recommended – if you visit Montreal, definitely give this place a go