Though I wasn’t particularly hungry after our poutine at Patati Patata, we were a few short blocks from Schwartz’s, and I’d received explicit instructions to stop there for a sandwich.  Well, it would have been a few short blocks if it wasn’t -17 degrees out, but as it was, it felt like walking 5 miles with the cold pressing down on us… Ahem.

Because there was a wait, and neither of us really wanted to wait or sit down and eat, I ordered a sandwich to go and took it back to our hotel room to eat. 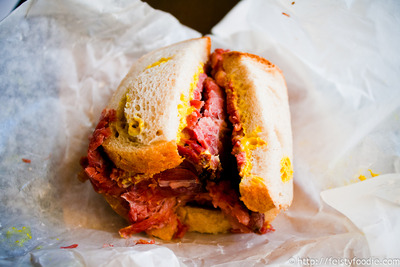 It looks kind of small and sad here like this. 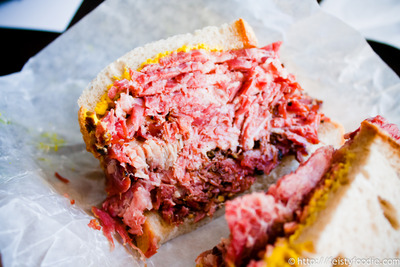 It did seem a little smaller than the pastrami sandwiches I get from my local kosher deli. 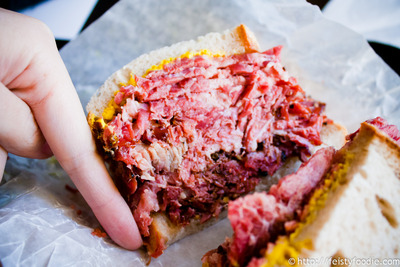 But my trusty finger-measuring trick tells me that it was about the same size.  It came pre-smeared with mustard – actually, once we ordered, it came out super fast, almost like it’d been pre-made… though that couldn’t be true, or the sandwich would have been soggy.  So… this was a good sandwich, with tender meat that was very tasty.  But I didn’t get the big deal.  I can get these in New York and better.  Okay, not for $6 by any stretch of imagination… but it wasn’t particularly special insomuch I literally get these in New York, and generally better.  Neither DLS nor I were all that impressed. Eh.

Yvo says: It was a good sandwich. It was not good enough to make up for the 4 blocks of walking in freezing – actually, way below freezing – weather that we had to endure, though DLS wisely was able to keep the sandwich semi-warm by sticking it in his jacket, haha.  It was… okay.  Basically, if you live in New York City, you won’t understand the big deal.  If you’re visiting Montreal from anywhere else, then you may just find yourself enamored of this sandwich.  Or yeah, go just cuz it’s only $6, which gets you a pretty tasty sandwich.
see above