It’d been a while since the Birthday Brunch Bunch met up to celebrate, and with MD/PB moving to CA, we all met up just after the New Year to celebrate, say hi, and catch up.  ANM chose Cafe Espanol and we headed over that Monday. 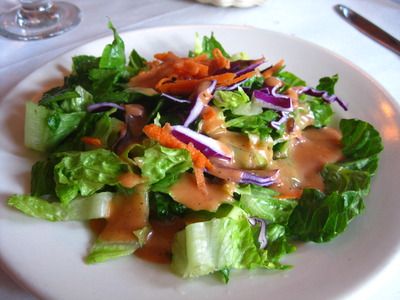 Every lunch special came with a salad.  Bright and fun, but nothing particularly special… tasty, though!  I’ve been craving greens so this worked well, though it was a little over dressed. 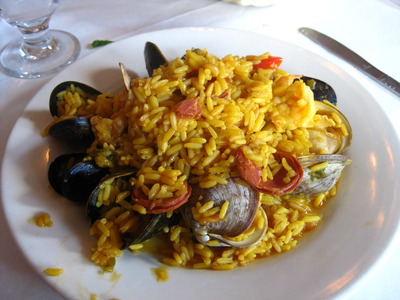 For my main course, I chose paella.  I really like paella – it’d been a long time since I had – and was looking forward to it.  While it was tasty enough – the saffron flavor was present, and the rice was plump and juicy – this isn’t the paella of which I dream.  It was way too wet and juicy – everything was cooked properly and had a nice flavor to it, but the qualities I look for in good paella just weren’t there.  This was more of just a nice seafood rice dish than proper paella.

Yvo says: I thought the place was cute, and everyone enjoyed their food.  I would go back to try other dishes, but no more paella – this was just not what I expect when I order paella.  Perhaps it’s a regional thing?  I’m not sure.  In any case, there was plenty on the menu that I would like to eat, so I wouldn’t be against going back.