Last Summer, CT and I had a picnic in Central Park with some old friends and some new friends. As we were noshing and drinking “non-alcoholic” beverages (because booze is banned in the park and we wouldn’t dare break the law), conversations were had on a variety of topics including food. A friend of ML mentioned a shop in the Lower East Side called Cheeky Sandwiches that had some of the best Southern style sandwiches such as chicken biscuits and po-boys he has ever had. CT’s ears immediately perked up at that point so Cheeky Sandwiches was added to “The List.”

As things happened, it took about six months for us to make it down there for lunch. The shop was quite small and on a very quiet stretch of Orchard Street. Signage is minimal, so it was easy to miss. It turns out the shop focuses on New Orleans fare as that’s where the owner is originally from. It was very sparsely decorated in a very shabby, hole-in-the-wall way. As long as the food is good, I couldn’t care less how a place is decorated.

They didn’t have many choices when it came to drinks either. CT had an iced ginger tea ($1.75) and I had a “Big Shot” orange soda. This was a New Orleans brand of soda. Even though I hardly ever drink soda, I decided to make an exception this time. It was refreshing, but expectedly the same as pretty much all other brands of orange soda. The tea tasted as if it was made in-house. It was super gingery, so it had some real spice/heat to it. I stole some at the end of the meal as it made a great digestif. 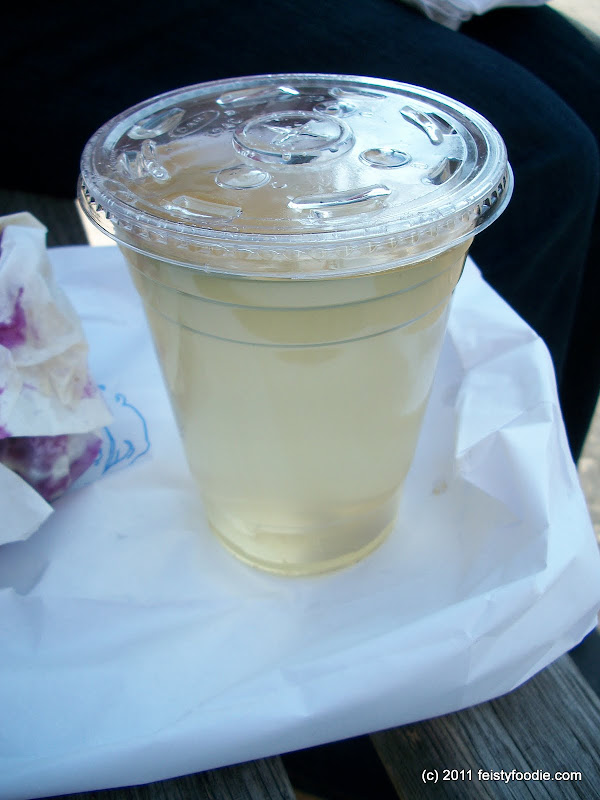 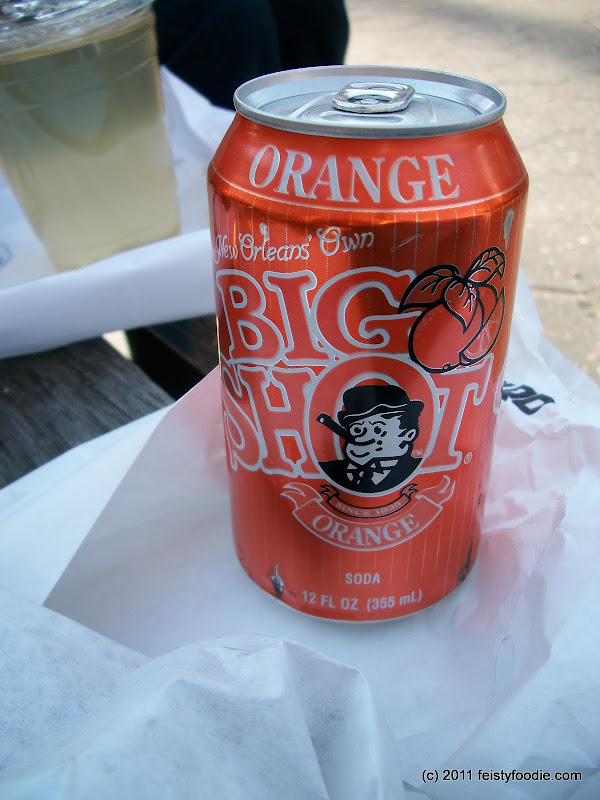 CT immediately ordered her chicken biscuit without even looking at the miniscule menu. It came on a buttermilk biscuit with cole slaw and gravy for $6.50. Quite different from the one you can get at Pies & Thighs. The owner/cashier seemed a little surprised we wanted it to go, but it wasn’t very often that it gets to 60 degrees in January, so we took our food to the nearby park. Once unwrapped, we understood the strange look. It was not a sandwich meant for travel, even a couple of blocks. It held up pretty well and although a bit messy, the flavors more than made up for it. The chicken was nicely fried with a good bit of crunch and the cole slaw cut any greasiness. The biscuit was nice and fresh and hardly crumbled at all, yet wasn’t a rock. 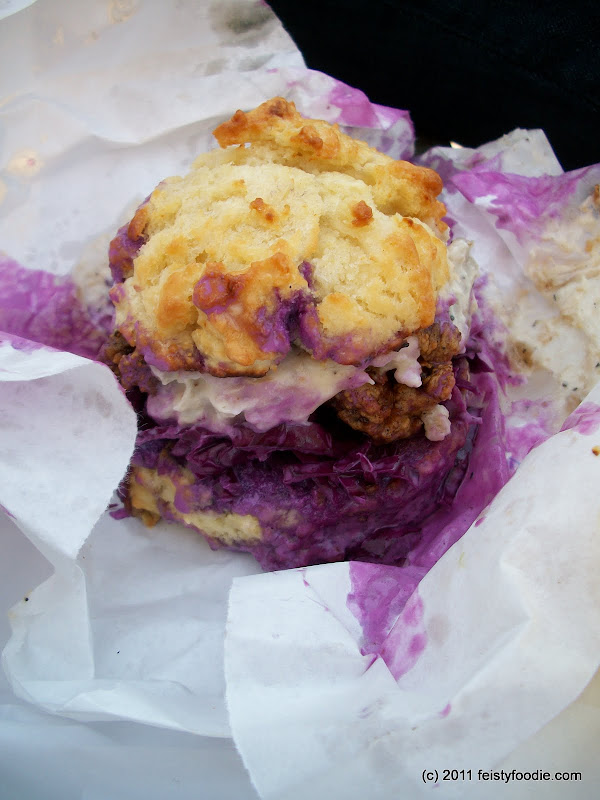 I tried ordering the po-boy but unfortunately they were out, so the owner sold me on the Beef ($8). It had braised short rib, horseradish sauce, arugula, cherry tomatoes on Challah bread. While it makes a fine French Toast or bread pudding, I was a little surprised to see it as a sandwich. Even though it was toasted, it was still a bit floppy, so the paper wrapping was needed to keep it all together. The short rib was excellent! Super tender and flavorful. The horseradish brought a little zip along with the peppery arugula and sweet cherry tomatoes. It was a very good sandwich. 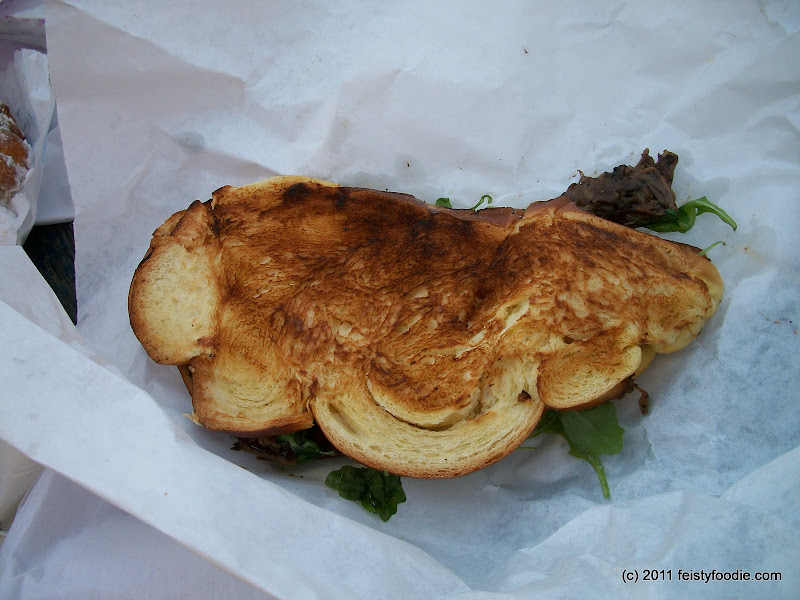 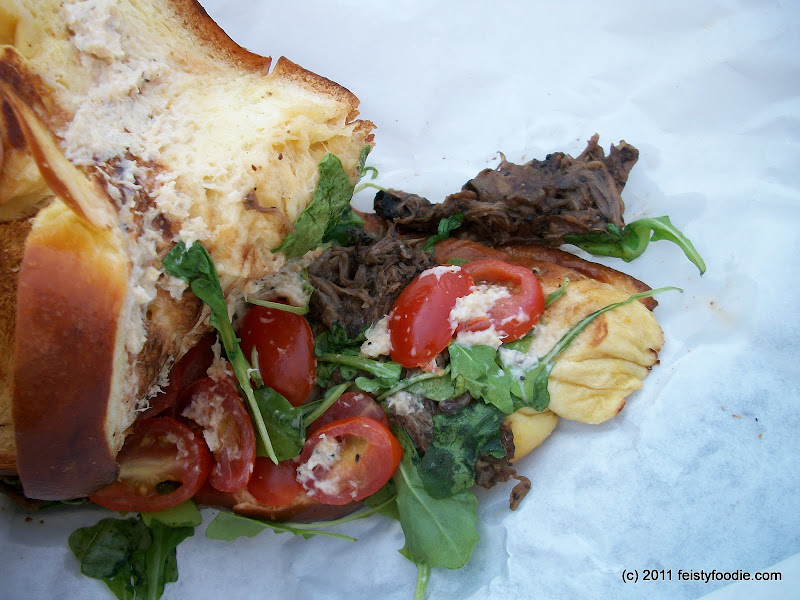 We shared a bag of Zapp’s chips, which were imported from New Orleans. I chose the Cajun flavor to stay as classic as possible. I assume that is the most popular flavor, but I have yet to visit New Orleans. I prefer kettle chips over regular potato chips since they get crunchier. The flavor was like a muted salt & vinegar with a bit a spice. I enjoyed them and glad we shared. 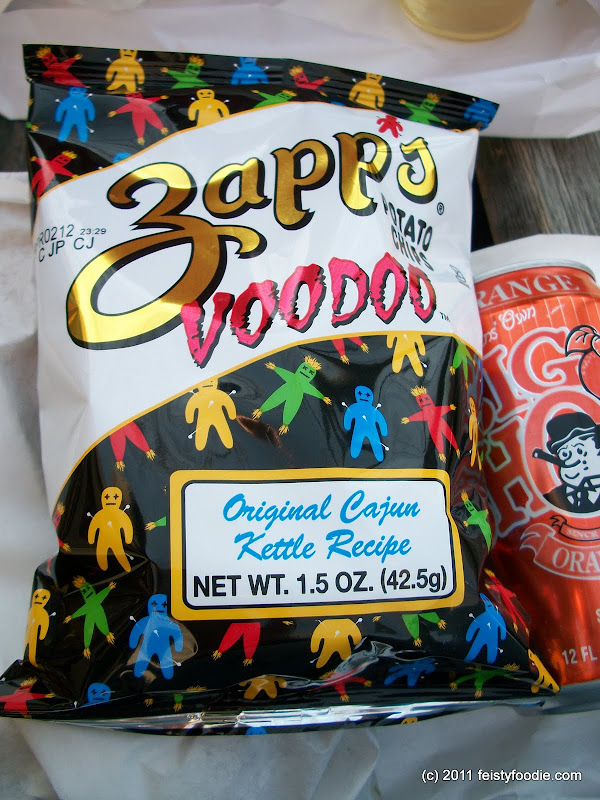 I also ordered some “ben-yays” (3 for $1) for dessert. The owner gave us these on the house, which was a pleasant surprise. These little fried balls of dough and powdered sugar really hit the spot after the savory meal. 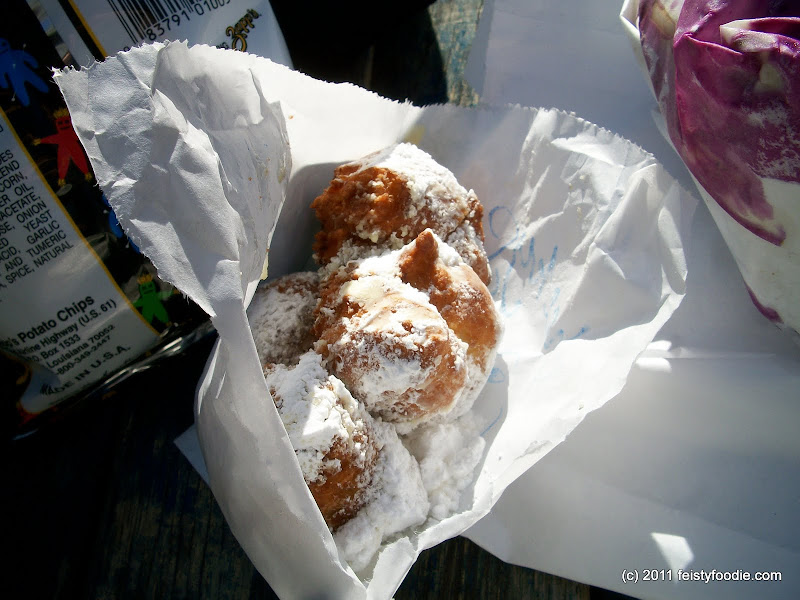 All in all, Cheeky Sandwiches make some fine sandwiches. Prices were super reasonable and service was very friendly. Since I am not usually in that area around lunchtime, I don’t know when I will return, but I definitely want to try that po-boy.