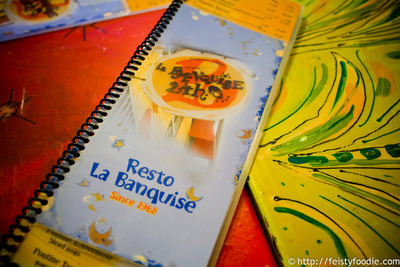 Why did we go to Montreal?  I’m nothing if not an indulgent friend, so when DLS said “I really like poutine” – yes, we went to Montreal to eat poutine.  (Background: we were having yet another ‘argument’ about why NYC is awesome and if he dislikes it that much, he should just move back to the West Coast already… and I said “think of all the things you can get here that you can’t get anywhere else! Name a food! Just name it, and I bet we have it, but not Mexican, I’m tired of hearing Mexican is better on the West Coast.” – and he said poutine, so I took him immediately to Pommes Frites to get poutine and said, “BAM. What now?”  Anyway, that’s why we were talking about poutine.)

In any case, one of my friend’s husbands is actually from Montreal, so he gave me a list of places to hit, and one of the suggestions for poutine was Resto La Banquise.  Our first stop, our first poutine of a poutine-filled weekend! 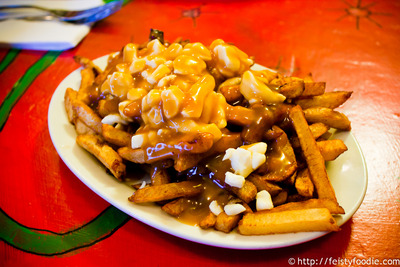 Of course one of our choices was regular poutine, which was fantastic – crisp frites, gooey curds, and lovely, savory gravy.  DLS practically housed this before I could even take a bite – I eventually had to take this plate from him. 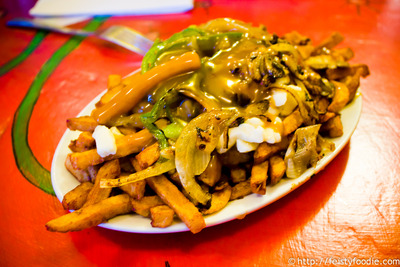 …mostly because, in keeping with my being an indulgent friend, when our server came around to take our order, DLS ordered this one – poutine topped with green peppers and onions – apparently without registering that a minute earlier, when he’d suggested this one, I’d said “No, I don’t like green peppers.”  The poutine was good as before, but the flavor of green peppers really dominated a large portion of it, so I gave up on this one and commandeered the other one.  (DLS said he totally didn’t hear me.)  I wouldn’t mind going back and trying some of the other varieties of poutine… though DLS noted that it seemed the addition of green peppers and onions, two things he really likes, didn’t do much for it, and said he might just enjoy classic poutine best.

Yvo says: If you’re in Montreal, there is no reason you shouldn’t stop by Resto la Banquise and sample one of their many poutines.  While we did prefer the classic over the poutine Rachel (with green peppers and onions), there are so many different varieties that it would be a shame to stick to just one!  Really properly fried frites.  Oh, they have other food there, but we opted to not fill up since we were literally in Montreal to have poutine…
recommended