One chilly December evening, DLS told me he wanted to go to Chinatown for dinner and suggested a couple of places.  Since I usually am the one to give suggestions (read: pick where we eat), I really wanted to be open to his list, but one place was the recipient of a rare “not recommended” rating from me, and the other was… Joe’s Shanghai.  Pardon me while I laugh into my sleeve; while I KNOW for sure that Joe’s Shanghai had its hey-day, I was not one of those who frequented the place.  Partially because I could never get past its silly name – I don’t know, it just didn’t sit well with me – and partially because … meh.  In any case, DLS insisted that Joe’s Shanghai in Flushing was rather good, and since we’d had soup dumplings at Shanghai Cafe Deluxe, he wanted to compare.  Especially since he’d said he thought the Joe’s Shanghai in Flushing had ever so slightly better soup dumplings than Shanghai Cafe Deluxe, which literally made me sneer. 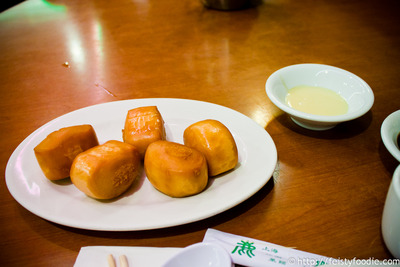 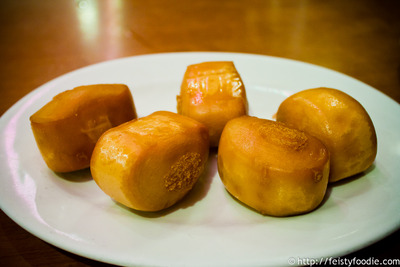 When we sat down, DLS got excited and started talking about mini fried buns.  I had no idea what he was talking about, so he ordered these – I guess they’re fried, though I wouldn’t have guessed that.  The outside texture was like it’d been glazed with sugar – slightly crunchy – but not really that sweet.  The inside was plain bread – mantou for those familiar with Chinese cuisine (a very plain baked bread that is like ‘poor food’ in China when eaten plain; it’s a great foil to very flavorful dishes, in the part of China that eats bread as its main carb).  And that little dish on the side?  Because the exterior isn’t sweet, you can sweeten it… with a little dish of sweetened condensed milk.  I ate one and was done – definitely not a dish invented for people like me.  And definitely not an appetizer in my opinion, but DLS was happy to have found this, and nommed away. 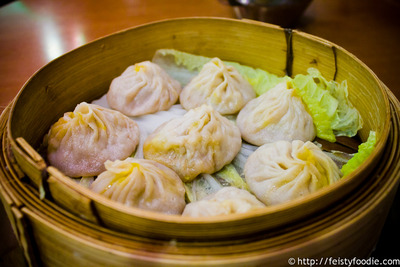 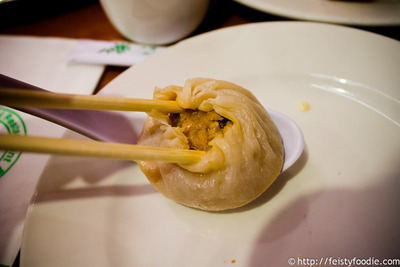 When the soup dumplings arrived, I almost laughed out loud – look at them!  They’re so heinously ugly.  The one in the middle looks like someone got angry and just twisted off the top ‘nipple’ and didn’t care.  Really sloppy.  I shrugged though and soldiered on.  The wrapper was thick and slightly gummy, but even weirder, it was oddly dry, so they stuck to my lips as I tried to eat them – I really wanted to lick all around the outside so it would slide into my mouth more easily.  Instead, as I tried to shove the whole thing in my mouth, it just stuck to my lips and tore as it entered, which left greasy soup spilling out of the sides of my mouth.  DISLIKE.  And oh yes, the soup itself was greasy, oily, and not in that lovely luscious fatty porky way that soup dumplings should be – but rather in an unpleasant icky way.  I wasn’t too thrilled with these dumplings at all – they were pretty bad. 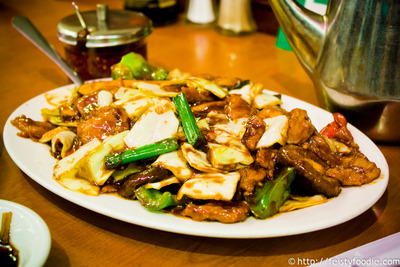 For the sake of consistency, the rest of our order mimicked our order at Shanghai Cafe Deluxe.  Spicy double cooked pork, which was markedly spicier here, and the vegetables were an odd mix of cabbage, eggplant, and peppers.  I thought it was OK, but DLS didn’t like this dish much if at all. 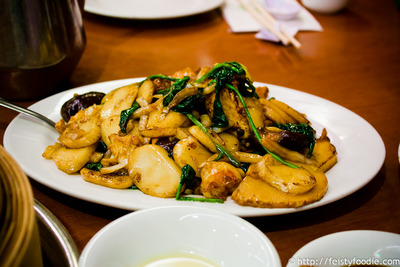 This time, our fried rice cakes were ordered with ‘subgum’ which basically means a mix of proteins – beef, pork, whatever.  The flavor here was better than it’d been at Shanghai Cafe Deluxe – someone who wasn’t afraid of salt (or soy sauce, really) had cooked this dish – but that person may have also absentmindedly left the rice cakes out somewhere to overcook.  They were mushy and lacked the chewy texture that Shanghai Cafe Deluxe had had, and in fact, the very characteristic of rice cakes that makes me like eating them – the chewiness – was obliterated into a gummy mess.  Blegh.

Yvo says: More misses than hits, I don’t think I’ll be returning to Joe’s Shanghai in the near future or ever, really.  Not the one in Chinatown – I’ll do my journalistic duty and visit the one in Flushing for comparison’s sake (and to see if DLS deserves any food cred in my eyes, haha), but that’s it.  Joe’s Shanghai offered me nothing of value, and I don’t intend to return so he can laugh in my tastebud’s face again.  Dislike.
not recommended