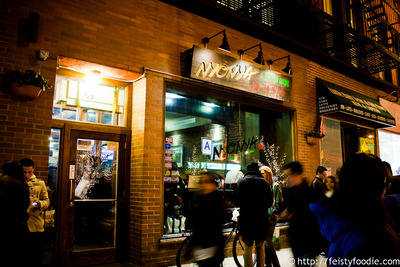 A while back, I wrote about Nyonya in Brooklyn, which prompted many people to comment that I should plan to go to the one in Chinatown for comparison’s sake… and invite all of them along.  Due to schedules shifting etc., we wound up with just TT, Gary and DLS joining me, but it was plenty as the place was pretty crowded on a Friday evening.  We waited about 10-15 minutes for a table, but luckily, it wasn’t too cold that night so waiting outside wasn’t painful. 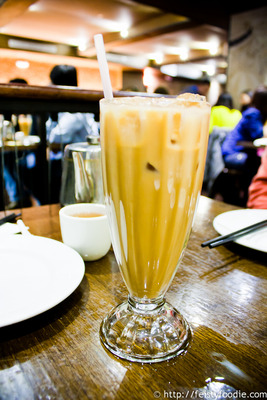 When I saw Malaysian iced tea on the menu, I had to order it, as I’ve ordered Thai iced tea at Malaysian places to have them correct me… and then bring me Thai iced tea anyway.  This begat a long discussion about the differences in the two, until mine appeared and I scowled.  Thai iced tea is orange, and this was definitely not the same… and drinking it was just iced tea.  Boo. 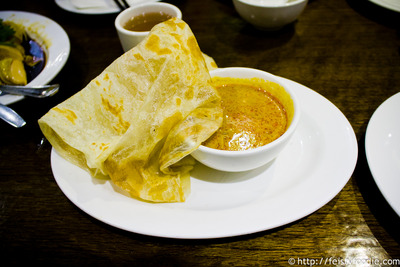 Roti canai was dispatched rather quickly, and I found it tasty enough – not above or below what I expected it to be.  Chewy crepe with a curry dipping sauce. 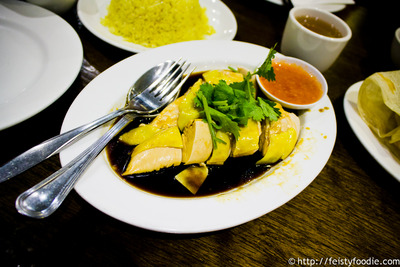 Hainanese chicken, white meat – something was missing with this dish.  I didn’t make much comment but it just wasn’t as tasty as the one I’d had in Brooklyn, I don’t know, not flavorful enough.  It was leaps and bounds better than the one I’d had Jaya just a few short weeks prior, but I think anything would have been… 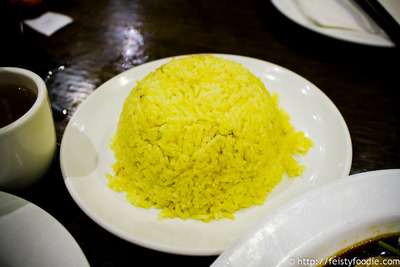 …and of course, the rice that came with it, which was rather tasty. 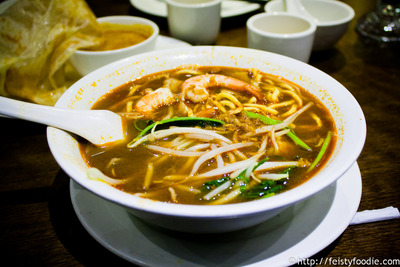 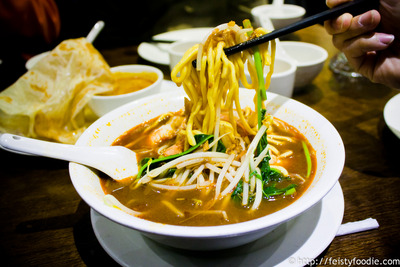 DLS ordered a noodle dish whose name I didn’t catch.  I tried some and thought it was OK, but not something I’d want to order again.  Slightly spicy, but difficult to eat while wearing a white shirt, that’s for sure… 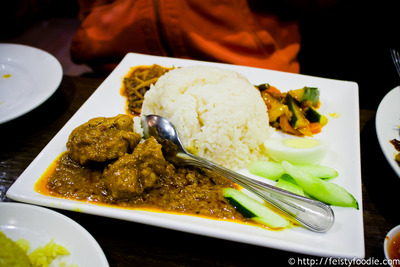 Gary ordered the nasi lemak, which he seemed to enjoy well enough.  I didn’t try any, and I will never be able to order this, sadface, though I love the idea of a bit of a couple of dishes to make a well rounded, varied meal… Alas, my coconut allergy does not permit me to eat these things. 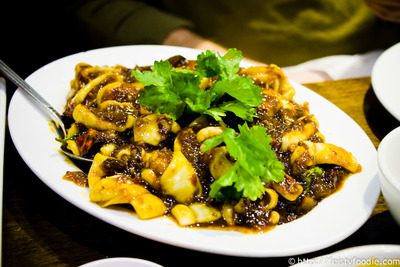 TT chose a squid dish with hot chilies, and I totally tried this and loved it.  The squid was cooked perfectly – slightly chewy, with enough give so it wasn’t like eating bubble gum – lots of heat but not uncomfortably so, just right.  The evil glow of red in the sauce was deceiving, and I put some on my rice to eat, loved it.  Super flavorful, just great.  I think he definitely won the ordering game this dinner. 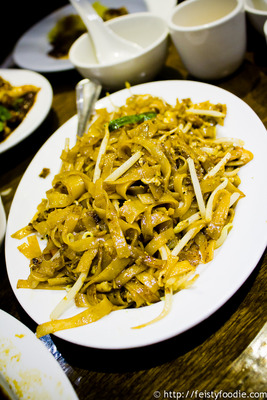 For comparison’s sake, char kway teow, which I eat at a lot of Malaysian restaurants, and here was good, but not wonderful.  Just sufficiently tasty.  It quickly became apparent that this was considered the most boring dish, as everyone ignored it in favor of the more flavorful dishes on the table. 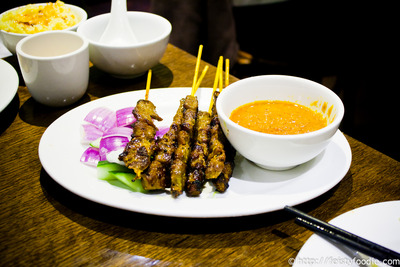 The first thing I ordered when we sat down was the satay, but the server told us it would take 10 minutes.  That’s fine – I’m used to satay taking a while, actually.  So it came to the table last, and while I thought it was very good, again, it wasn’t stand-out good.  Just standard level of good, because I like beef satay…

Yvo says: Our meal overall was pretty tasty, but I didn’t think oh my, this is fantastic Malaysian – it was just very standard.  The place was super busy though, and a lot bigger inside than I thought it was from the outside – tons of people waiting for tables when we arrived and still when we left.  I would definitely go back, and feel comfortable saying it’s very good Malaysian, but I didn’t notice such a great improvement from the Malaysian place I normally go to that’s in my neighborhood that I’d only go to Nyonya again.
recommended

« La Bottega at the Maritime Hotel – Feast of the Seven Fishes
Tuesdays with TT: Royal Seafood »