It’s that time of year again – HB’s birthday!  Lots of reasons to celebrate; this time, the Birthday Brunch Bunch gathered at Blaue Gans.  I was a little nervous when I noticed that it’s the same chef as Wallse, where HB and the FC took me last year for my birthday, and we didn’t really like the food.  The menus are pretty similar too, but I decided to go in with an open mind. 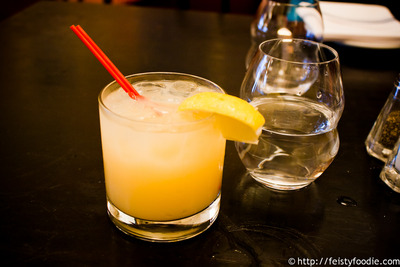 As soon as I sat down, I was handed a cocktail menu – and of course had to order the Grapefruit Soften.  Soften = Elderflower, and though my elderflower obsession has waned a little bit (insomuch where I was going through a bottle of syrup every month, and I currently have the same bottle from a few months ago), I will still order it whenever I see it on the menu.  Stoli vodka, grapefruit juice, orange bitters and elderflower – I think this might’ve been better with a floral gin like, ahem, Bombay Sapphire (my personal fave gin), but the drink might’ve felt a little too summery then.  As it was, a very nice take off of the classic screwdriver, and I happily drank this. 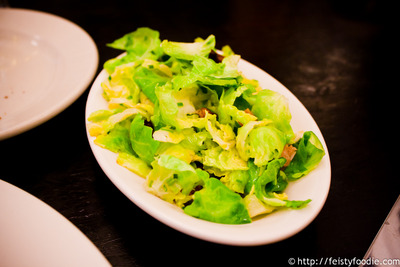 I ordered brussels sprouts & bacon because something about seeing this on the menu makes me order it, though I’m more than capable of making these excellently myself.  I asked MK if she’d eat any and she said, “Well, I’ll eat the bacon…” hahaha! HB tried some, commenting that she doesn’t like brussels sprouts usually – finding them too bitter (and I said “then they’re undercooked”) – but thought she might like them better since these were cut apart.  She was right – she thought these were much tastier than ‘sprouts she’s had in the past.  I thought these were fine, but really, cut apart, cooked in butter, then tossed with crispy chunks of bacon… There’s nothing in that explanation that I don’t like.  MK happily ate all the bacon… and some of the butter.  I prefer eating my ‘sprouts in halved form, though, and roasted. 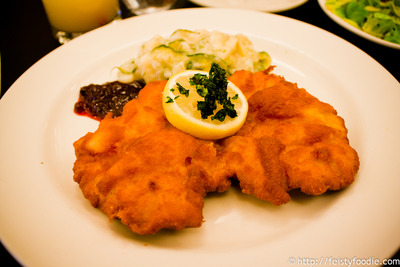 I ordered the wiener schnitzel, and while it looks the same as that at Wallse, it was markedly cheaper, and the breading stayed on the schnitzel.  HB and I both liked it better here than at Wallse – I thought this was perfectly cooked, tender, flavorful, and just made better by the lingonberry sauce.  The potato-cucumber salad was very tasty as well. 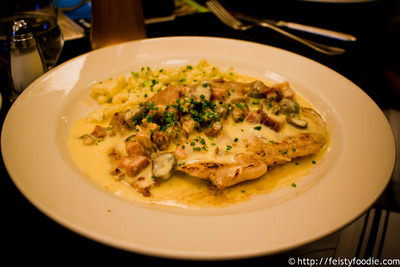 Most people ordered wiener schnitzel or this – the jaeger schnitzel, which was schnitzel topped with mushroom/bacon gravy, buttery, rich gravy, that MK all but drank from her plate.  I guess she liked it?  I tried a bit but I don’t really remember it to be honest.  I know she was very happy with it though! 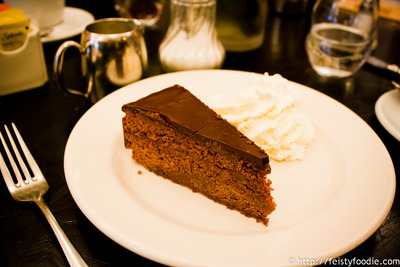 MK ordered the Sacher Torte, which she appeared to find too goopy sweet – it was pretty dense and sweet.  The top was fudgy while the cake itself tasted a bit nutty, like hazelnuts almost. 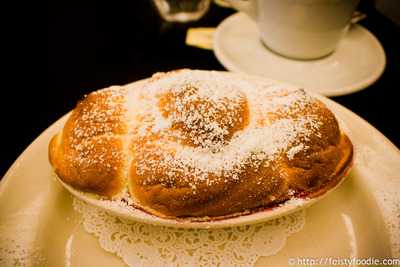 Since I’d like it last time, I ordered the salzberger nockerl, or merengue on top of huckleberries. 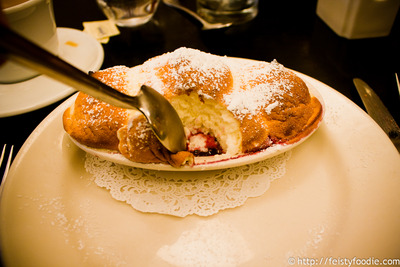 This was too much for just me, so I passed it around the table, and everyone seemed to like it.  I really like the airy puff of cloud on top, and the tart huckleberries do a good job cutting through the sweetness.  A nice end to a pleasant meal!

Yvo says: The food was markedly better than Wallse, and the service was also very pleasant while we took up the huge long wooden table in the middle of the restaurant.  Very casual, laidback atmosphere – I would definitely return, if I didn’t think it was in the middle of nowhere- the above brunch, with most of us getting coffee, a cocktail, dessert, etc. plus paying for the birthday girl came to $45/person… not so bad.
brunch is recommended