After ramen, naps, and then a long, winding walk down to Chinatown, DLS and I found ourselves outside Shanghai Cafe Deluxe, where TT and Hungry went a few weeks prior.  Reading that post made me really want soup dumplings (xiao long bao), so at the first opportunity to get them, I jumped.  Surprisingly, there was a wait for a table at 8:30 on the night before Thanksgiving – Chinatown usually seems so empty that late at night! – but we stuck it out and got a table within 10 minutes, though there was a minute I almost threw down because they seated some people ahead of us after those people spoke Cantonese… grrrrrrr. 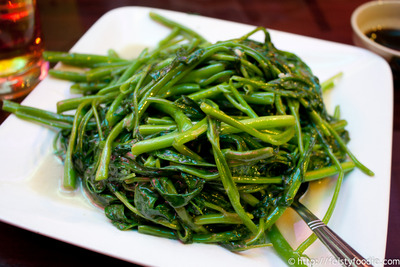 Like the good Asians we are, we started off with some veggies: water spinach with fermented tofu.  When we first ordered this dish, the waiter asked if we wanted garlic or fermented tofu, but when we said fermented tofu, he repeated 3-4x that it was a very Chinese preparation and not for everyone.  Okay, we were speaking English, but he really seemed to believe neither of us would like it.  Ummm… no, we’re both familiar! so we eventually got this, but there was barely any of the fermented tofu.  Sadface.  Also… strangely enough, this was the most expensive dish we ordered, at $11.95. 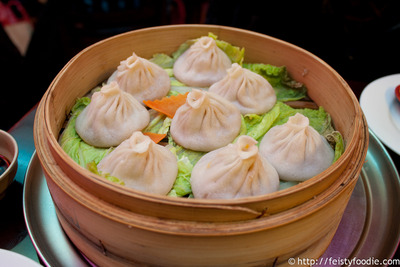 Everyone in the restaurant was ordering soup dumplings; not a single table went without.  We went with the crab & pork ones because um, why not?  I suggested getting a tray each of crab&pork and just pork – and no other food – but DLS wanted other dishes, so I obliged happily. 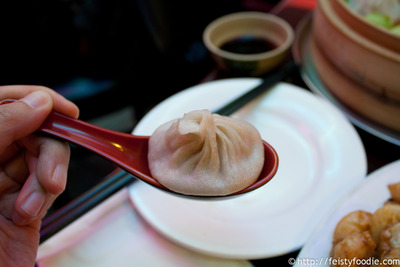 The skin was pretty thin, but I managed to pick them up without breaking the skin or spilling soup everywhere. 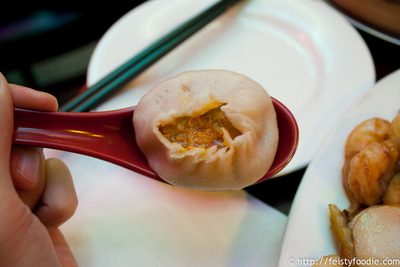 Everyone has their method of eating soup dumplings; this is mine, taught to me by my grandfather, the world traveler.  He told me that like a house, every dumpling needs a chimney to let smoke (steam) out, so bite the top off, then use your chopsticks to open it up a bit and cool it off.  If you like, spoon a little black vinegar in, and then carefully enjoy (by popping the whole thing in your mouth).  This is how I eat them and how I’ve eaten them since probably forever.

As for the soup dumpling itself: the crab lent its ever so slightly ocean-y taste to the dumpling, but didn’t overwhelm the soft, juicy pork inside.  Instead, it just enhanced it while the pork’s fatty silkiness, along with the very savory broth, all came together in a thin wrapper to make my mouth happy.  I thought these were very good, and probably the best soup dumplings I’ve had in a long while.  Not bready at all, which is my problem with some other places I shall not name.  Win – I will definitely be going back for more! 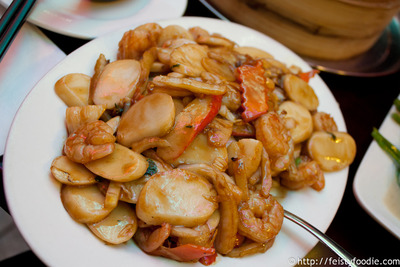 We also ordered seafood rice cakes – crab, scallops and shrimp tossed with soy sauce.  I was disappointed to see fake crab – sue me for thinking it might be the good stuff – and I gave over all the shrimp to DLS since I’m not a big fan of shrimp.  The scallops were OK.  We both agreed that the dish was a little bland, but the rice cakes were nice and chewy, a great carb for our meal.  Next time I’d order the pork & pickled greens rice cakes, as I saw a lot of people ordering those and figure those must be better – even though there was no soy sauce in that dish. 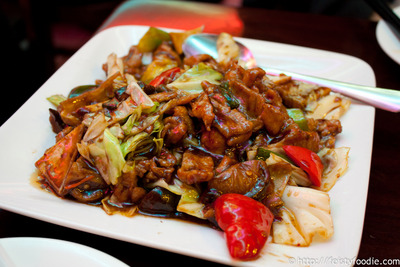 Guys, you know I’m pretty dopey sometimes right?  (Okay.  A lot of the times.)  While we were there, I was Tweeting about the meal, and someone asked me the name; I incorrectly Tweeted back Sichuan Cafe.  I also wanted to order double cooked pork, thinking it was a dish I should order… and yes it is.  At SICHUAN places.  This is a SHANGHAINESE place (which is what soup dumplings are, Shanghainese), so there is no reason for me to have thought they would do this dish the way I was expecting.  Aside from the fact that certain words sound/look alike to me (Shanghainese and Sichuan both start with an ‘S’ – I have a whole list of words/names I confuse for one another, and there are just as quirky reasons behind it, like how I often type the letter F when I mean the number 5 or vice versa), I really have no excuse.  Whatever the reason, I ordered double cooked pork and we received the above.  Yeah that’s not the dish I thought it would be – and this had some pieces that were way too spicy for me – but overall, it was a tasty dish that, with white rice, would have been great.  As it was, I picked at the veggies around the dish and called it a day.

Yvo says: I would definitely return for the soup dumplings, though I would probably stop trying to be creative and order from the rest of the menu.  Another order of rice cakes and that should be enough food – as it was, with a bubble tea for DLS and an almond milk tea for me, the bill came to a little over $50 (with tax/tip), and a lot of leftovers for DLS.  I don’t think I need to explore most of the rest of the menu – seriously, soup dumplings, an order of rice cakes, and I’m set.  Maybe an entire order of soup dumplings for just me 😉
recommended