As loyal readers of Feisty Foodie know, the FBM likes to get together for a potluck every couple of months. Since we are in the middle of the holiday season, it was time for our now annual FBM Holiday Potluck. We all had a good time last year and were looking forward it again. This time around CT & I hosted at our apartment. It was only fair since Hungry and Beer Boor has hosted on multiple occasions previously.

CT made jambalaya with chicken, shrimp and smoked chorizo. She has been tweaking this recipe for a while now, so it came out perfect! Hardly any was leftover, which shows how popular it was. 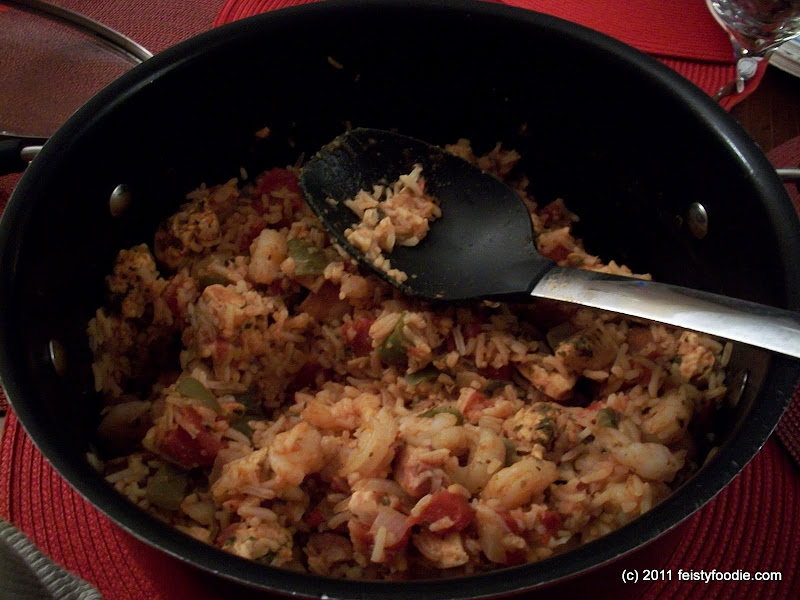 CT says: For the first time, I was really pleased with the way this dish turned out. I started with this recipe and have been tweaking it based on comments from epicurious and my own personal preferences/what I have on hand. My major changes were substituting chicken stock for the water, eliminating the tomato sauce (becomes way to tomato-y and can’t taste much else) and most importantly, adding 1.5-2 tsps of creole seasoning (I mixed my own, but can use store bought). I also used chorizo and added some chipotle in adobo sauce for personal tastes, and used white rice because I always have it on hand. I love how easy and delicious this dish is!

I made Spaghetti Pie based off of this recipe. Of course, I tweaked it a bit. Why would you choose cottage cheese over ricotta? This was only my second time making it and it also seemed to be a crowd pleaser. 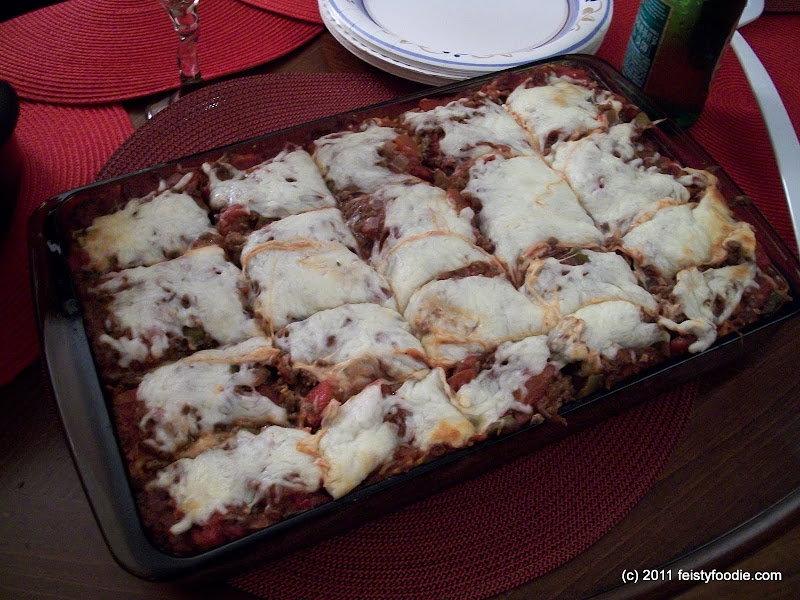 Beer Boor fried up some chicken for us. It was excellent! He said he brined the chicken for a while so it was super juicy. It handled the trip from the Upper East Side and was still delicious hours later. 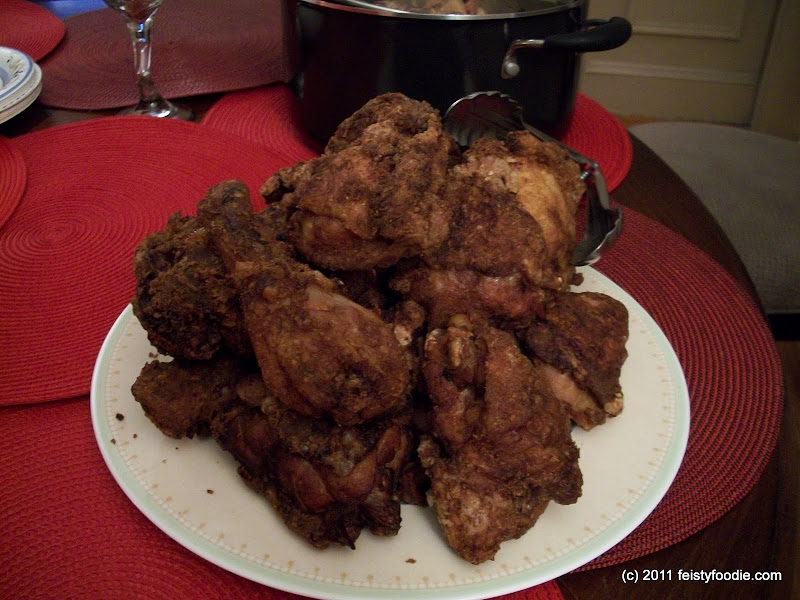 CT says: So juicy and great seasoning. Though BB was the first to arrive, I didn’t wait for the others. I grabbed my plate and dug into this.

Cheeeese made pulled pork in his recently acquired crock pot. He did a very good job with it. 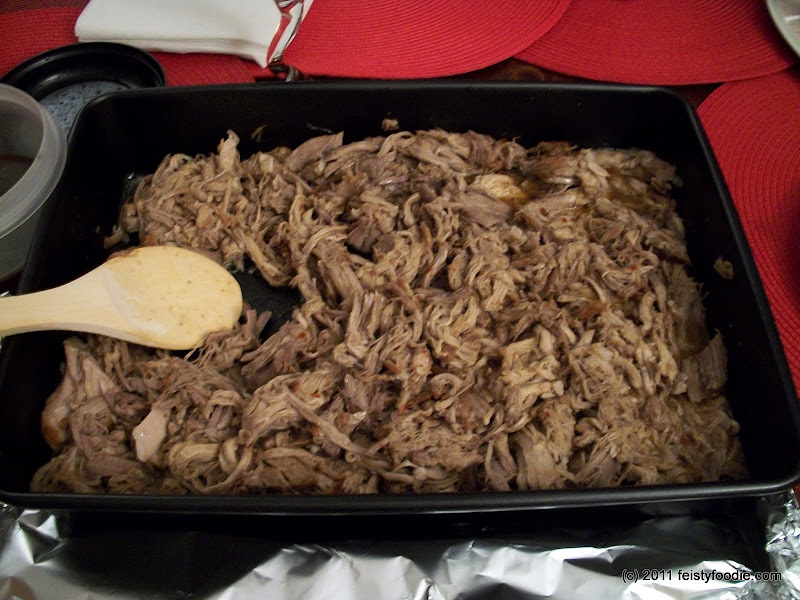 In addition to providing us with many libations, TC brought foie gras AND duck rillettes. They both disappeared quickly as FBM definitely enjoys the finer things in life. 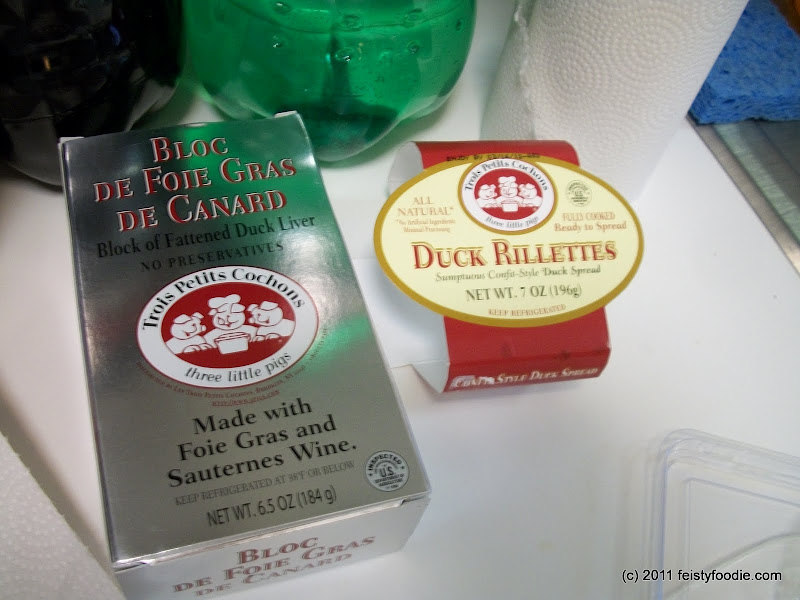 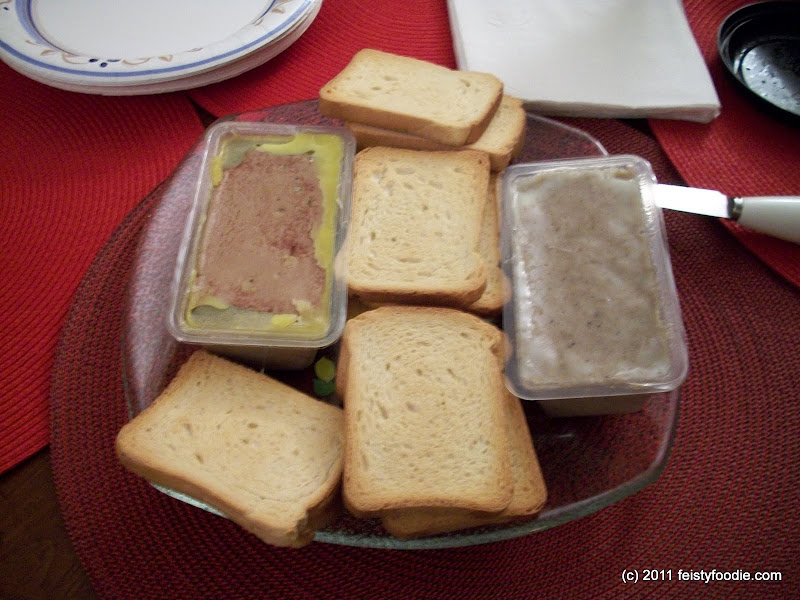 CT says: TC knows how to please the host. YUM.

Goats made fetus-shaped cookies. He bought the cookie cutter last year after it made news in the blogs. I am at a loss for words, hahaha. 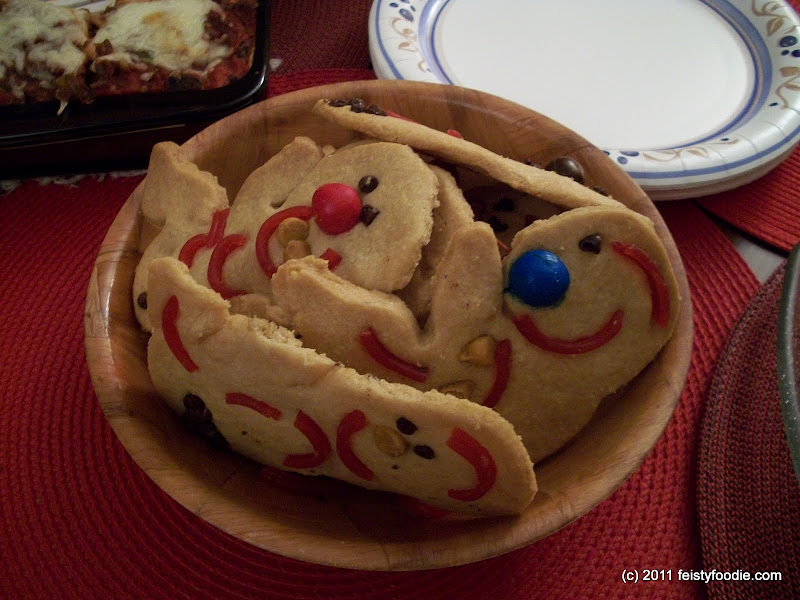 CT says: These were much cuter than I expected when he told us what he was bringing. He did a great job decorating them too!

Hungry from Tasty Eating brought her usual plethora of dishes including:

(Cuban) Roast Pork- like Cheeese’s super juicy and tasty. It had some crispy skin as a little bonus. 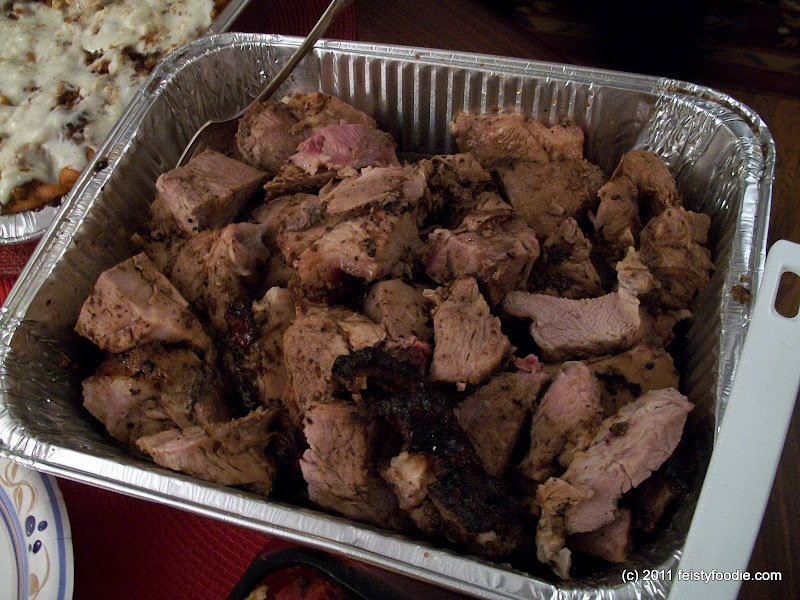 CT says: More pork! What’s not to like? However, I was drooling with anticipation of….

Buffalo Mac & Cheese- We have heard about this dish for a long time now and were all drooling in anticipation. It was GREAT! Nice and spicy but cooling from the blue cheese. We were happy she brought this to our house (LEFTOVERS FTW!), but it ended up being a situation when leftovers were packed up, hahaha. 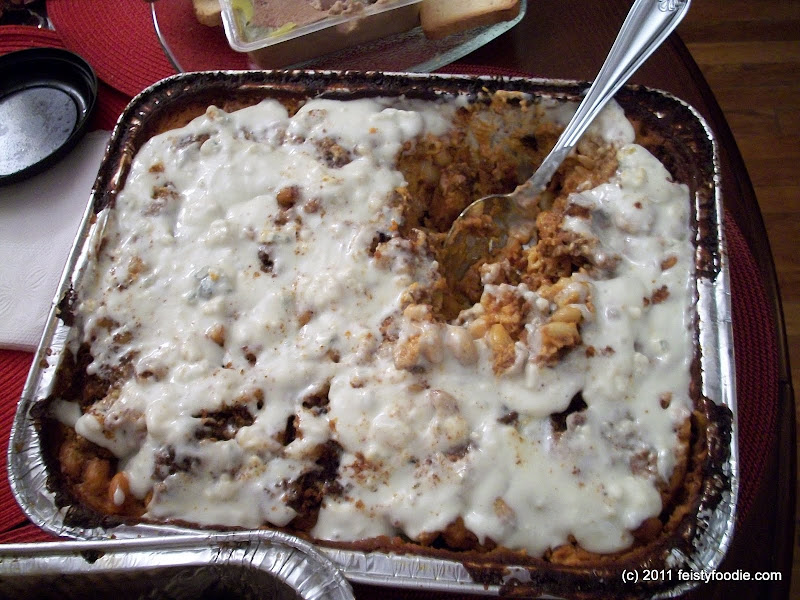 CT says: It was everything I was hoping for and more! It had a great kick to it, but a nice cooling blue cheese topping too. I think I had 4 serving by the end of the night, and was still fighting the rest of the group for the leftovers! Hopefully Hungry will be kind enough to share this recipe with me.

Later on, she sneaked in variety pack from Robicelli’s. Various cupcake flavors and some brownies for good measure. 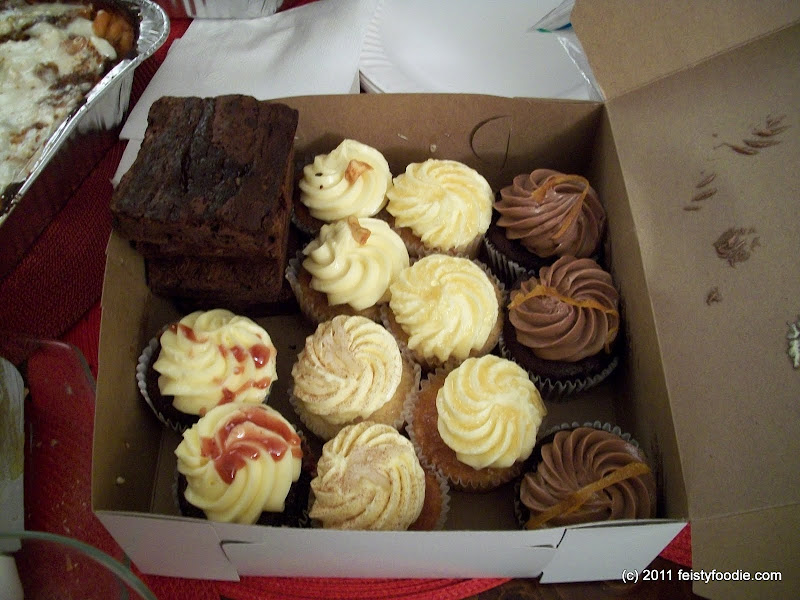 CT says: My third serving of the buffalo mac didn’t leave much room for desserts… and that’s say a lot coming from me! So I only had a bite of TT’s cupcake. It was good. But I went back for more mac ‘n cheese.

Dean from Nommables made some Thai tea sugar cookies. I only had half of one since I was already pretty full, but it was pretty good and fortunately not very sweet at all. 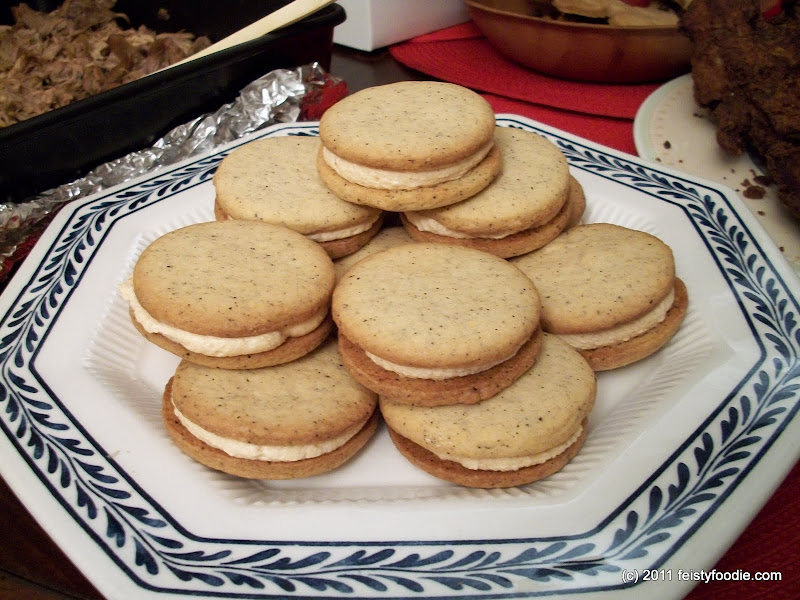 He also made me my own cookie to thank me for hosting. It would be inappropriate to show you the unedited picture. Children, avert your eyes, NOW! 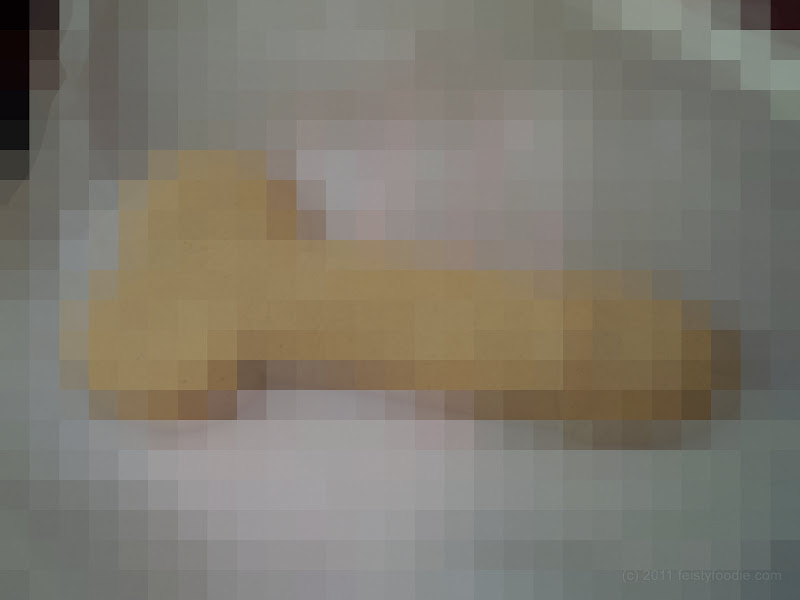 CT also made some peanut butter & jelly thumbprint cookies for a part of her Secret Santa present. She made a lot so the remaining were put out after we were done swapping presents. Unfortunately, I had too much “milk” and didn’t take a picture at the time.

CT says: For these I used a Martha Stewart recipe. I made them the night before and after my first batch, found the recipe called for way too much time in the oven and my cookies almost burned. Fortunately I had a couple more batches to work with and with the reduced time, they came out perfectly. Even better, the next day my crispy ones seemed to have soften a bit, so I was happy. Still, the flavors were spot on … very peanut buttery.

I think everyone was pretty pleased with the results of our Secret Santa. Some useful and some hilarious gifts were given out. Edward Fortyhands?

All in all, it was another successful FBM potluck. All of the food was especially delicious this time around. I hope the fellow FBMers will chime in on any mistakes on made or will go into more depth about their dishes.

Next week, CT & I are taking time off from posting to enjoy the holidays! I hope all of you have a great break and Happy New Year! See you in 2012.