Once again, CT & I were called on by my dear Aunt B to puppysit Scout while she was away. We value our time with Scout a lot, so it was no trouble to take care of her. Although we would never think of accepting payment for our services in the form of legal tender, Aunt B insists on treating us to a nice meal. Who are we to argue? You may remember last time she took us to an amazing meal at Ai Fiori. This time around we insisted on going to a more reasonably priced restaurant considering we didn’t watch Scout as much.

El Parador Cafe has been a fixture in my neighborhood for over 50 years. I have walked by many times, but paid it no heed since it looked liked another Rossini’s from the outside (very old and unassuming). Then last Spring, I read an interview with the owner on the Fork in the Road. He is the (relatively) young, second generation owner. I really enjoyed reading the interview and decided that I would have to check it out myself. I figured this would be a great place for the three of us to check out.

Fortunately, the inside was decorated very nicely, not old fashioned at all. While we waited for Aunt B. near the bar, CT had a small coughing fit and the owner immediately had a glass of water brought over for her. Now that’s what I call customer service!

After being seated, we were immediately presented with some complimentary chips and salsa. The salsa was warm and more of a liquidy chili. It was quite delicious and hard to stop eating to save room for other food. The menu noted that the “salsa” was not vegetarian friendly, so you have been warned. While I didn’t really notice any chunks of meat, I bet the source of the delicious flavor was due to some sort of meat. Meat makes everything better! 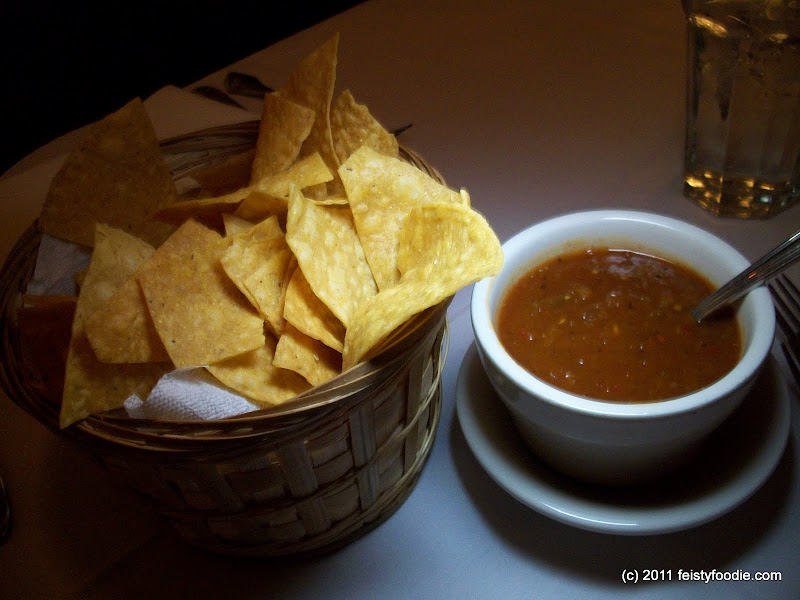 CT says: As TT said, though there were no visible signs of meat, the flavor was most definitely there. I wouldn’t expect to like a warm salsa, but I did!

Since guacamole is usually a good barometer for how good a Mexican restaurant is, we had to order it here. Like Rosa Mexicano, the molcajete was also shaped like a pig, but much smaller. Fortunately, this version was much, much better. The avocado wasn’t fussed with too much so it was nice and chunky. There was also some nice heat at the finish. 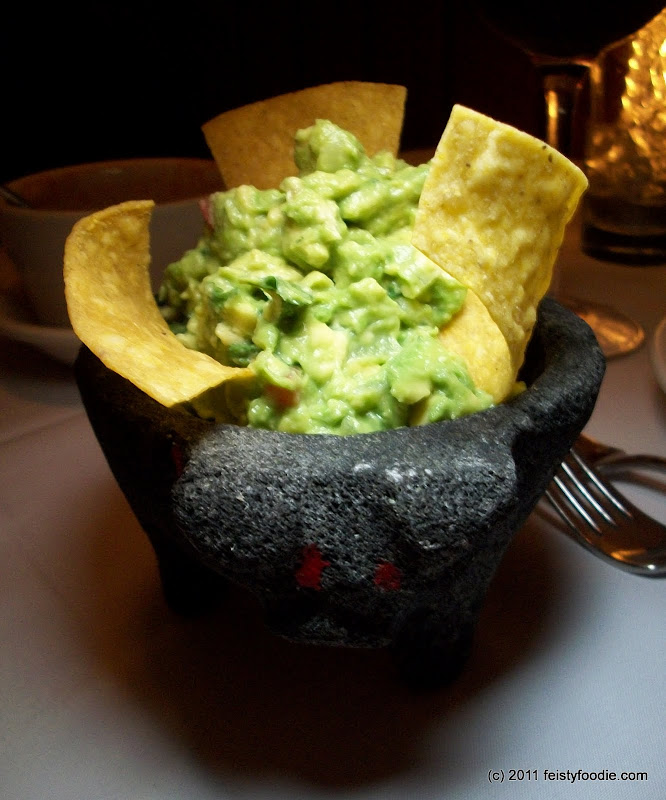 CT says: It was good. Pretty standard, but I’d eat it any day of the week.

We asked for some hot sauce to kick things up a bit. While it wasn’t especially spicy, it had a great roasted pepper flavor. 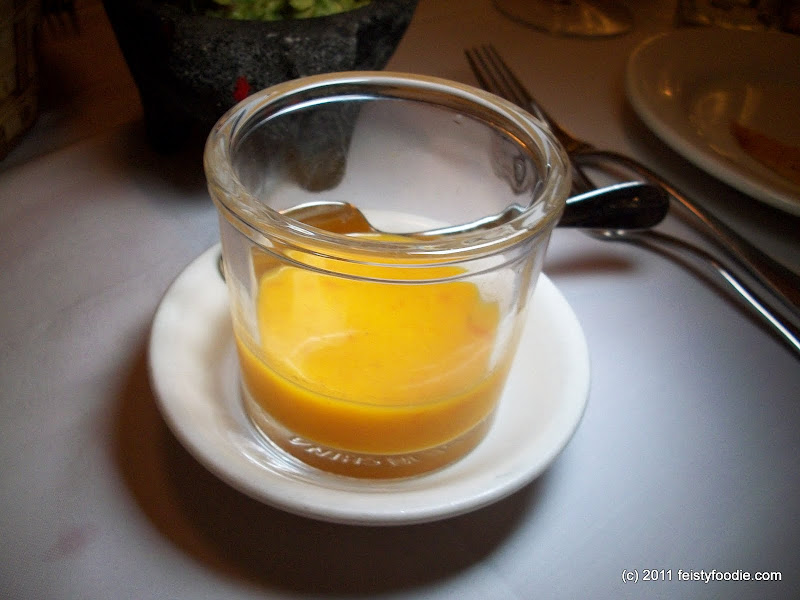 The three of us decided to share a couple appetizers.

First was Shrimp Ceviche ($12) with celery, jalapeno and lime. I wasn’t expecting much of a ceviche from a Mexican restaurant, so I wasn’t too disappointed when it ended up being pretty meh. I guess I was spoiled in Panama? 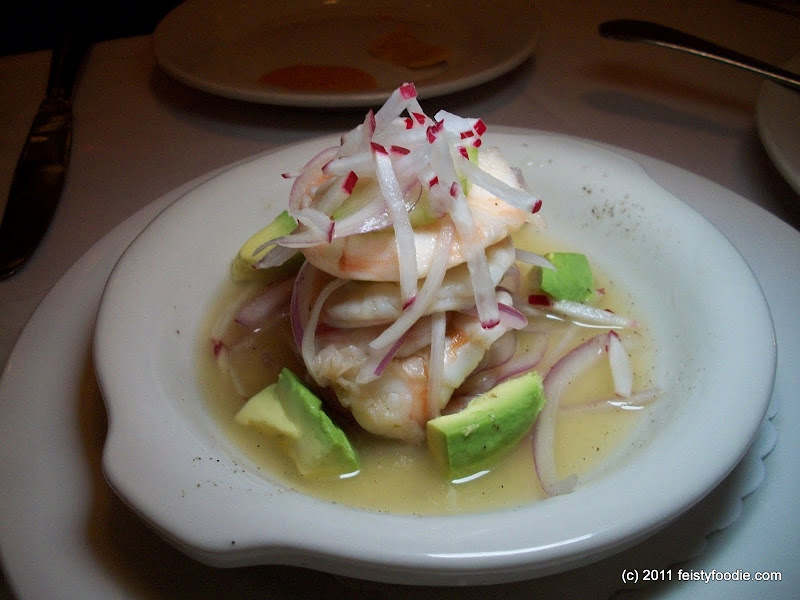 CT says: Good enough to happily try and a nice light starter, but not a must order considering the other amazing things we had.

They had an appetizer special of a Pork & Tomatillo tamale that sounded quite interesting and worth a try. I thought it was a pretty good tamale with some nice flavors from pork and tomatillos, although as with most tamales I have had, the flavor doesn’t punch you in the face. The roasted peppers in the back added a bit more flavor and spice to the bite of masa. 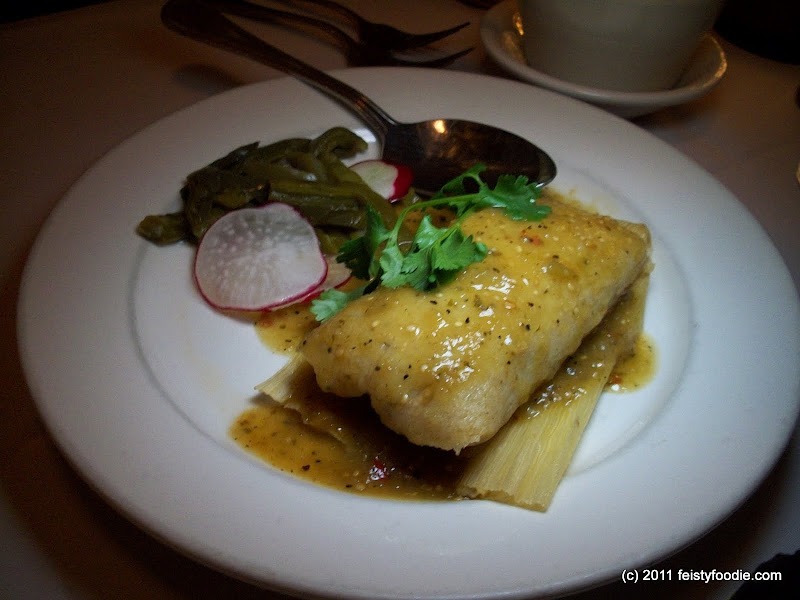 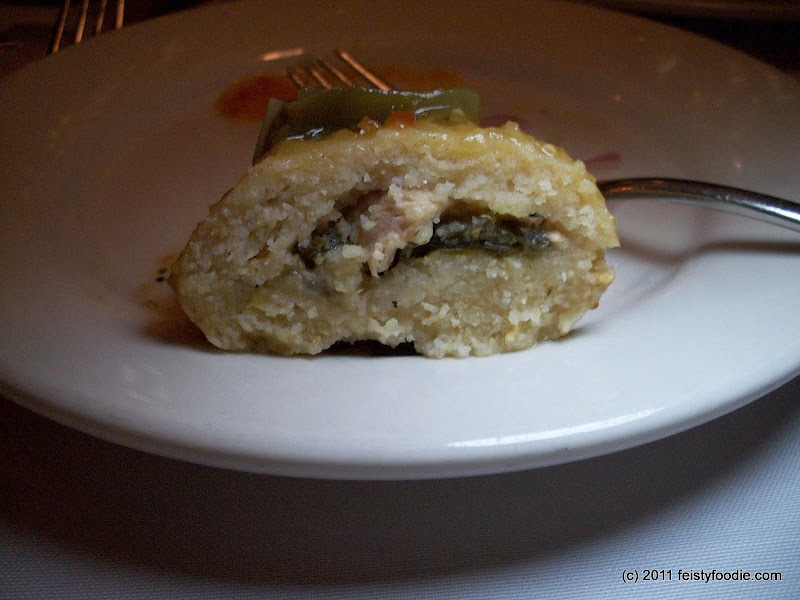 CT says: I’m not a big fan of tamales, so I only had a little of this. I usually find the cornmeal to be a little to dry for my taste, and not enough stuffing. Not because it’s made badly, but that’s just what the dish is. I like lots of meat!

Due to our fickle ordering, our side of Green Chile cornbread ($6) came out a bit early, but allowed us to get a good taste without being distracted by the other dishes. It was very good cornbread. Although the crust was little dry, it was a nice, roasty flavor to contrast the buttery innards. I appreciated the whole kernels of corn and chunks of pepper strewn throughout as it tasted more homemade that way. 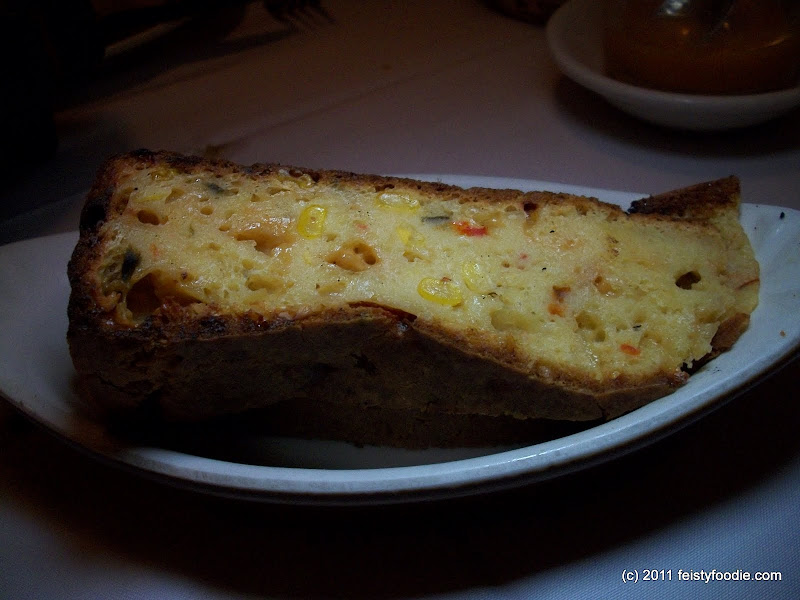 CT says: I really like cornbread, and as it was nearing Thanksgiving I was in a cornbread mindset already. This was really delicious… a little sweet, a little moist, packed full of goodies. I would get definitely this again. (Plus it’s the perfect size to share or pig out on your own!)

Aunt B ordered the Camarones en Salsa Verde ($24). Shrimp in an emulsion of fine herbs, garlic, white Rioja and fish fumet. This was plated tableside with the waiter plucking the shrimp out of a small pot to plate on the plate of rice. I had a taste and noted the shrimp were perfectly cooked. Unlike The Three Hens, the price was justified since there were another four or five shrimp left in the pot. Aunt B enjoyed this very much. 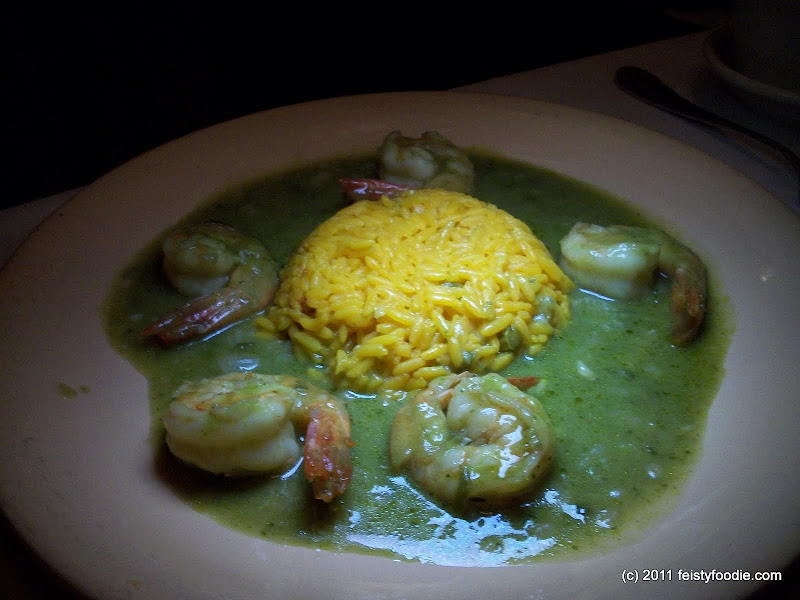 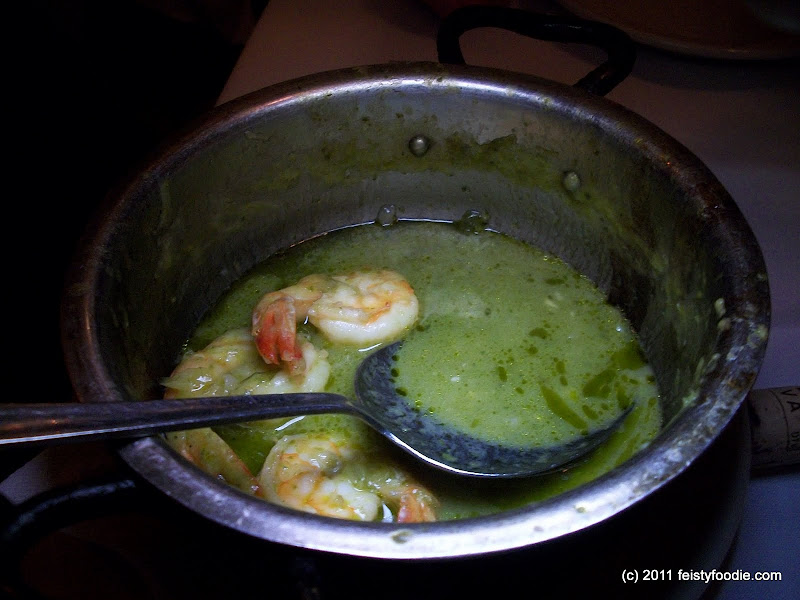 The ladies decided that we didn’t over-order, so we also added on a side of the lime & honey sweet potatoes ($6). I am glad they did! These potatoes were pretty great! It tasted as if there was the juice of at least five limes mixed in, which was great for anyone who likes citrus as much as me. The acid from the lime cut the honey to the perfect level of sweetness. I am sure there was a ton of butter mixed in too, which always makes everything better. 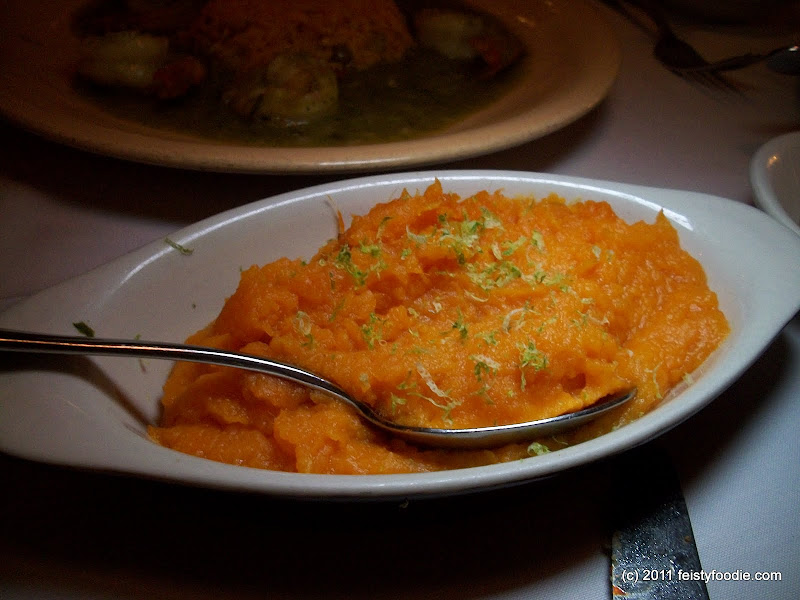 CT says: These were so good – a definite order if you like sweet potatoes. They did a great job balancing the sweetness of the potatoes with the acid of the limes. Especially with all the meat TT and I were consuming, this dish was a perfect complement.

CT was in a rib mood (she almost always is), so she ordered the Barbacoa De Costilla Pibil ($22). Baby Back Ribs steamed in banana leaves and barbecued. Tequila-Chile Huajillo salsa. Crunchy cabbage slaw. Camote with fresh lime. As you can see, it was quite a huge portion! The ribs were cooked perfectly! On the other side of the plate, there was actually some of the same delicious sweet potatoes we had as a side. 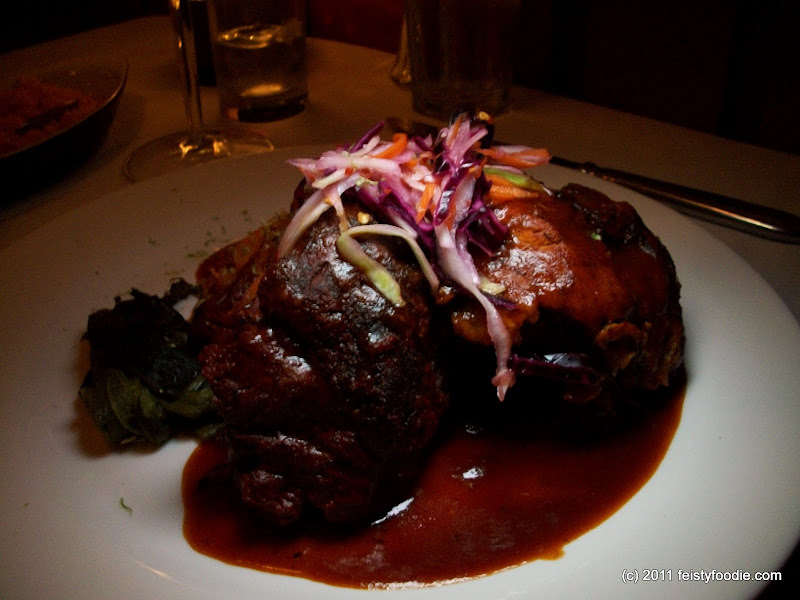 CT says: OMFG. Amazing… so perfectly cooked and tender! With a little tug of the fork, it came right off the bone, though I had no shame in picking it up and gnawing on the bone either. Though it may look overly sauced to some, the sauce was really tangy and finger-licking good. As you can see it was a huge portion, so I only ate about half (plus some of TT’s lamb), with the intention of taking the rest home for a wonderful lunch the next day. Unfortunately, in my rib-high I forgot my leftovers on the table and cried the rest of the night. (No really, it took me weeks to get over until my parents visited and brought me back their leftovers). When we go back, I’d have a hard time not re-ordering this dish, it was just a rib-heaven and at such a reasonable price!

I decided on the special of slow braised lamb shank ($22). Chick peas with bacon & chorizo, braising juices reduction, red onion and cilantro. The picture doesn’t do the dish justice, but it was a HUGE shank. The meat was super tender and delicious. I particularly enjoyed the gravy that had a steady progression of heat with a deep, rich flavor. I like chick peas in any form, so the addition of two types of pork was a special treat. I will go as far to say that this was the best lamb shank I have ever had! It was an absolute steal at that price. 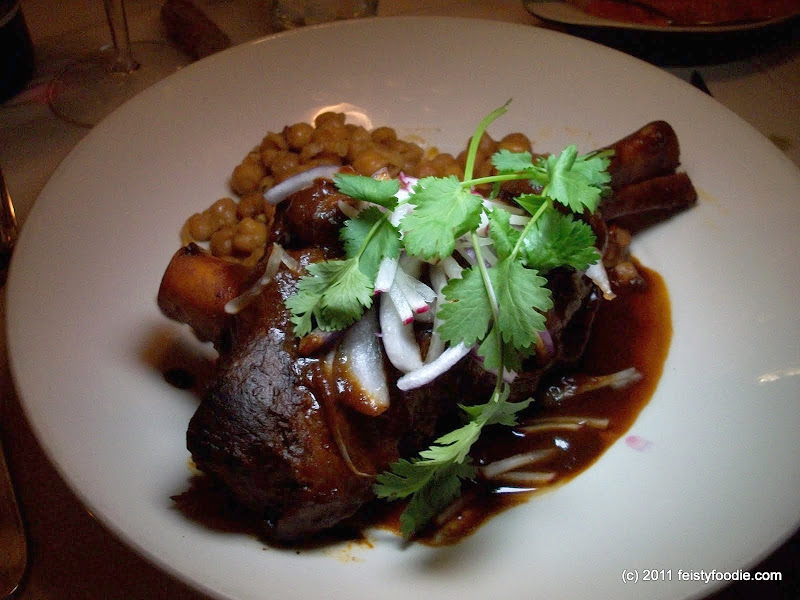 None of us were able to finish our main courses and didn’t even try to order dessert.

All in all, El Parador Cafe was pretty fantastic. I am sad that I never tried it before in all of my years of living in the neighborhood. Service was good, prices reasonable, large portions and tasty food. That sounds like a winning combination to me! I can’t wait to return to try some more of the dishes that I wanted to, but didn’t get a chance.