I enjoyed Ai Fiori so much for lunch in September that when asked where I’d like to go for my birthday, it immediately sprang to mind as the perfect choice. 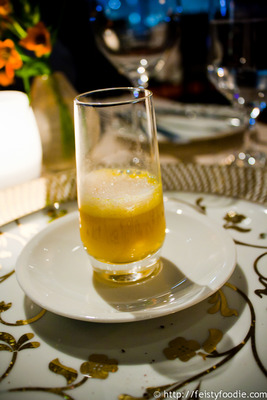 After we’d been given plenty of time to browse the menu and make our wine selection – I chose a glass of sparkling rose that turned out to be $28, but it was delightful and literally tasted ‘pink’ which the sommelier laughed (not unkindly!) when I told him this – an amuse of kombucha squash topped with a madeira and truffle foam was served.  I didn’t expect to like it, as I’m not a fan of any of those components, but I thought it was really light and well-balanced, with the truffles tempered by the madeira and the sweetness of the kombucha working nicely.  My dining companion hesitated before trying it, but quickly realized that he liked it and finished the small sip happily.

I suggested that we both go with the four course prix fixe for $89 so that we would both be able to try a wide range of dishes, and was met with no resistance. 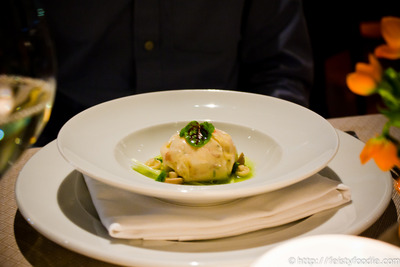 For his first course, he chose a lobster salad with celery root and more.  Unfortunately, this item is not listed on their website menu, but I tried some and remember tasting green apple – underneath that sheet of celery root was a mound of lobster meat.  The lobster meat was, however, chopped down a bit – perhaps for easier eating? – but I’m not fond of that preparation.  I think it was the meat of the lobster’s body, which made it unique in taste and texture though… either way, he really enjoyed this dish and I wasn’t complaining. 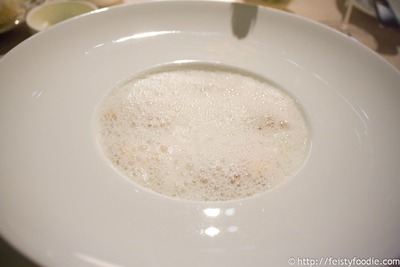 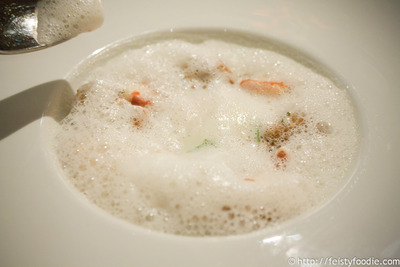 And for my first course, I ordered the uovo – lobster knuckles, sweet breads, served in a foam with a slow poached egg.  My pictures don’t do it justice because though I recalled CT eating this many months ago and commenting on the foam, I didn’t remember what was inside the foam or I’d have tried to take a picture of the poached egg in the center.  There was plenty of very crispy sweetbreads scattered around the dish, along with lots of meaty, tender lobster knuckles – I have an extraordinary fondness for the claw meat of a lobster – but most special of all, sitting in the center of the dish, quivering slightly, was the most perfect poached egg I have ever ingested.  It was the yolk, cased in the thinnest sheath of egg white; the egg white fully cooked, while the yolk had clearly been poached beyond simply raw… to this place where it existed as silken golden perfection.  I can’t even explain just how velvety the yolk tasted on my tongue as I dipped my spoon in and tasted it gently… just incredible.  The lobster and the sweetbreads were even more incredible dipped into this ‘gravy’ – an amazing dish that changed my perception of what a poached egg could be.  (I really need to start working on my poaching skills again.) 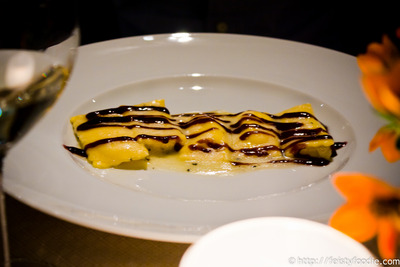 For his pasta course, he chose the tortelli – ricotta & mascarpone ravioli, boschetto cheese, red wine glaze.  Judging by the swooning and eyes rolling back in his head, I would imagine he quite enjoyed this dish… then he insisted I try a piece.  I took my bite dutifully and noted that there were truffles in the earthy taste, while he disagreed, then said it was probably from the red wine glaze.  I politely disagreed, and suggested that it might be in the cheese – and Google tells me that indeed, boschetto cheese is stuffed with white truffles.  Don’t argue with the food writer!  I tasted truffles, there are truffles.  In any case, he inhaled this dish, practically moaning over how delicious it was.  I agree that the pasta was cooked perfectly, the cheese fluffy soft, and everything worked together really well. 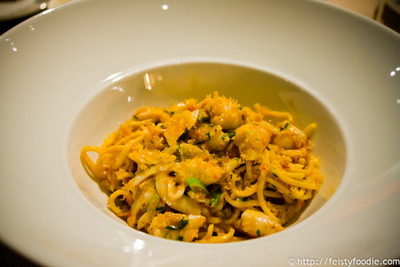 However, I was more than happy to focus on my dish.  This was the only dish I repeated from last time: simply called ‘spaghetti’ with only a few more ingredients, but those ingredients – the flavor they bring – oh my stars.  Bottarga (dried carp roe and one of my life’s favorite ingredients), blue crab, lemon and chilies.  The intense, concentrated salinity of the bottarga, grated generously over the top; the large lumps of blue crab; the sour tang of the lemon; and the heat from the chilies, scattered generously throughout the dish… just amazing.  I noted that this portion was quite a bit larger than last time, and that each strand this time was coated heartily in a beautifully salmon-colored sauce of sorts that tasted of heaven.  I sadly had to leave a small pool of that in the bottom of my dish as I had to save some room for my next course, but each bite – with a lump of crab holding the strands in place on my fork – was just amazing.  The way these simple ingredients worked together to create a bite beyond happiness is just incredible, and I tip my hat to Michael White for creating this dish for me to eat.  I tip my hat, good sir.  I’m not sure I can return to Ai Fiori and not order this dish, ever, or at least make someone else order it so I can have one single bite.  Okay, never mind, a single bite would never be enough for me… I will have to satisfy myself eating one bite of other people’s pasta courses. 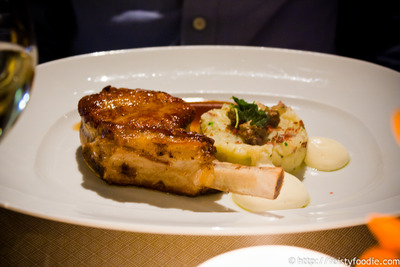 For his carne (meat) course, he chose the vitello ($10 supplement for the prix fixe): a veal chop, seared to perfection, served with a cloud of mashed potatoes, a bit of cheese foam on the side, topped with crispy prosciutto and, once again, tasting faintly of truffles.  I’m fairly certain the online menu doesn’t have the accurate description of this, so this is based on my impressions.  Amusingly, when the server asked him how he wanted it cooked, he turned to ask me how he’d like it cooked because “You write about food, so you know how I should order it” – I was slightly embarrassed because I dislike alerting the servers to my profession while the meal is in progress, but I responded simply “medium rare.”  The chop was cooked perfectly, tender, delicious and seasoned to bring out the best possible taste from the veal.  I know he enjoyed this course, though he continued to mention how much he’d loved his pasta course. 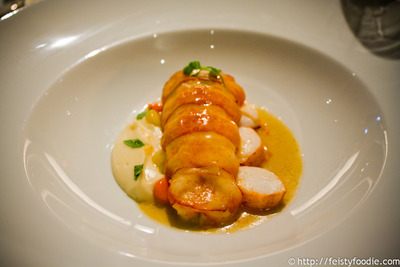 I’d decided almost as soon as I sat down that this would be a lobster-centric meal, so the astice: butter poached Nova Scotia lobster was my choice.  I’ve never had butter poached lobster that I recall, and this was certainly a unique experience.  The lobster itself was almost glazed in a buttery sheen, and while the medallions to the right of the tail were perfectly cooked, the tail itself was … ever so slightly this side of raw.  Cutting through it was a little difficult, and it tasted more gelatinous (ie, raw, since lobster is jelly-like when raw) than I’d expected.  I wouldn’t say it was untasty, though I couldn’t imagine preparing lobster this way, myself – I’ll leave that to the experts.  Swiping each bite through the sauce on the bottom was delicious, and I happily cleaned my plate.  An interesting experience to eat lobster that tasted just that shade of raw… 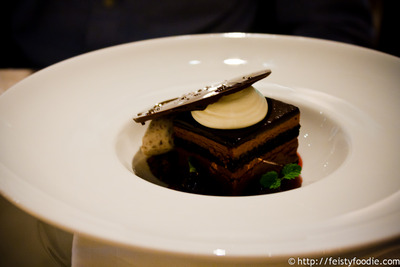 As dessert menus found their way in front of us, I felt comfortable, but not so stuffed I wanted to burst.  That’s a good thing in my world – I’d finally chosen wisely.  Giving over the dessert choice to me – despite telling our server that this was the course for which he lived – I chose the sformato di cioccolato: gianduja mousse, devil’s food, amarena cherry, stracciatella gelato.  I’m sure he enjoyed it because he inhaled it quickly, then said, “The pasta course was still my favorite.”  Hahahaha. 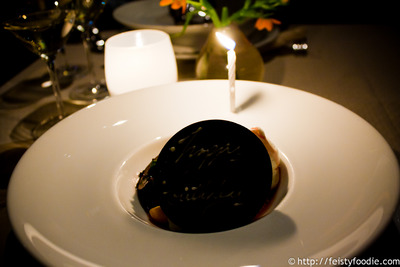 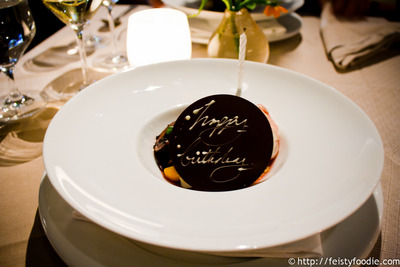 My dessert arrived thoughtfully with a candle and a tasteful chocolate disk with “Happy Birthday” scrawled across it.  No, there was no singing, thankfully, but the dessert was so pretty it made me happy.  Panna cotta: balsamic crema, black mission figs, almond milk, green apple sorbetto.  Panna cotta is one of my absolute favorite desserts in the world, and I count it among the things that if I see it on the menu, I’m ordering it. 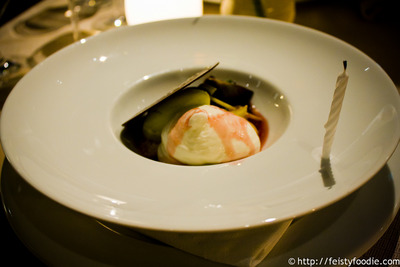 It was a little hard to see under the chocolate disk, so I was a bit confused.  I eventually realized that the panna cotta was three small balls – about the size of a pinball, maybe a little bigger – underneath everything else.  The black mission figs were dusted with something that made them taste incredible… and that white cloud smacked of almond, deliciously.  I had to eat all of the cloud, even as I got progressively fuller while eating.  The panna cotta was good, but a little harder texture-wise than I prefer.  But geez if the rest of it wasn’t well thought out, executed perfectly, and where can I get more of that white cloud?  Yes, please! 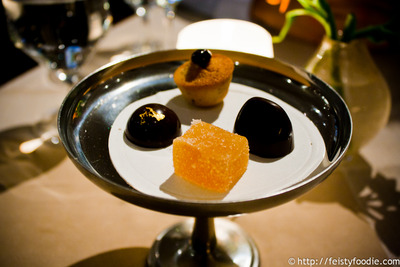 The night came to an end and the bill was presented to us along with these small bites.  Salted caramel, a financier stuffed with fig, dark chocolate and an orange jewel.  I only had room to eat the salted caramel (duh) and the fig financier, which had an awesome edge, chewy and yet moist, lovely.  The perfect bites to end the meal… then we walked outside into the chilly night and found ourselves back in the heart of tourist country.  I still don’t really understand the location choice, but oh well, the place never completely filled up (this was around 9pm when our meal finished)… which is OK by me.  (I’m sure they’re making enough money for their rent.)

Ai Fiori totally deserves the Michelin star it had just earned when we went.  Congratulations to Michael White and his entire team for yet another fantastic restaurant!  I look forward to seeing more of what you can do in the upcoming years.  But I still want to know: when are you bringing back my pork shoulder ragout dish?  Pretty please?

Yvo says: Consider that our service was fantastic: attentive, friendly, joked with us even as we made silly jokes, and never rushed us; the food was excellent, with nothing disappointing either of us, and everything executed flawlessly; the atmosphere upscale without being stuffy and casual while still feeling special; just everything was exactly what I wanted it to be.  For $89 for four courses, you could do a lot worse.  I daresay that my meal was entirely worth every penny of that $89, though a $28 glass of sparkling rose might be a bit much… In any case, I highly recommend you go to Ai Fiori for a special occasion post-haste.  It’s not a huge investment for this level of dining, and for what you get – the overall experience – it is a worthy investment.  Plus you’ll definitely impress anyone you’re dating 😉
highly recommended