Back at the end of August, my favorite deals site, Blackboard Eats, came out with a special prix fixe deal for Char No. 4 in Carroll Gardens, Brooklyn. In addition to hearing good things about the restaurant since it opened, CT’s Sister and Brother-in-Law moved to the neighborhood just a couple months ago. You may remember the delicious pizza they treated us to when we helped them move from South Brooklyn Pizza.

So amazingly enough we offered to come to the wilds of Brooklyn to visit ML and get a bite to eat. As we walked from the subway, we were exposed to the gastronomic wonders that is Smith Street. There were a ton of interesting bars and restaurants that we will have to check out in the future.

The Blackboard Eats deal was $38 for three courses including a drink with each course. There was a special menu so we only had three options for each course(except dessert), but that was more than acceptable for us. ML decided to go a la carte.

We had a choice of any bourbon cocktail to go with our appetizer. ML joined the fun and got one too. From left to right: Noreaster- Ginger beer, lime, maple syrup. Bourbon Bonnet- Fresh pineapple juice, habanero, cherry, brown sugar. Bourbon Insider- Hard apple cider, honey, lemon, baking spices. 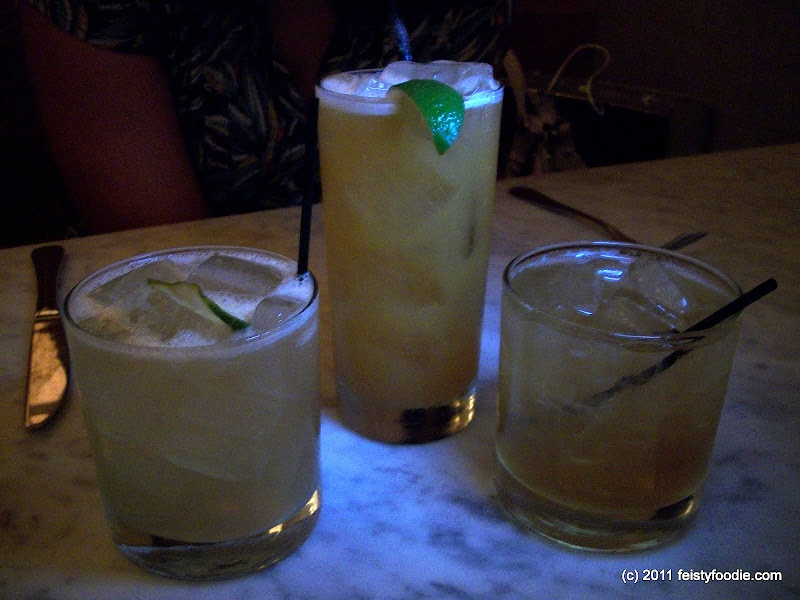 I had the Noreaster. It was a nice refreshing cocktail with a bit of spice from the ginger. I believe the ladies enjoyed their cocktails too.

ML started with one of the restaurant’s signature dishes; House-cured lamb pastrami with coriander aioli, pickled onions & grilled rye-caraway bread. It was quite a generous portion so CT & I were forced to eat some too. It was quite delicious. The meat had a very delicate pastrami flavor unlike what you would get at a traditional deli like Sarge’s. Since the restaurant was dark, it was hard to see the difference between the pastrami and onions, but it was a great combination along with the creaminess of the aioli. This was definitely a must order appetizer. 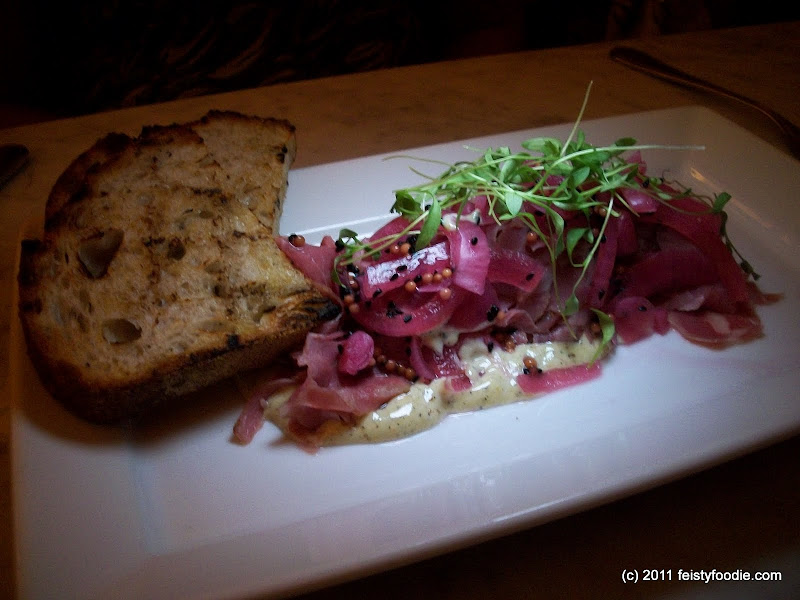 Surprising no one, CT started with the Chicken liver mousse with fig-bourbon mostarda and grilled sourdough. This was a huge portion of chicken liver, so much so that she ended taking some home much to the delight of her Mom the next day. 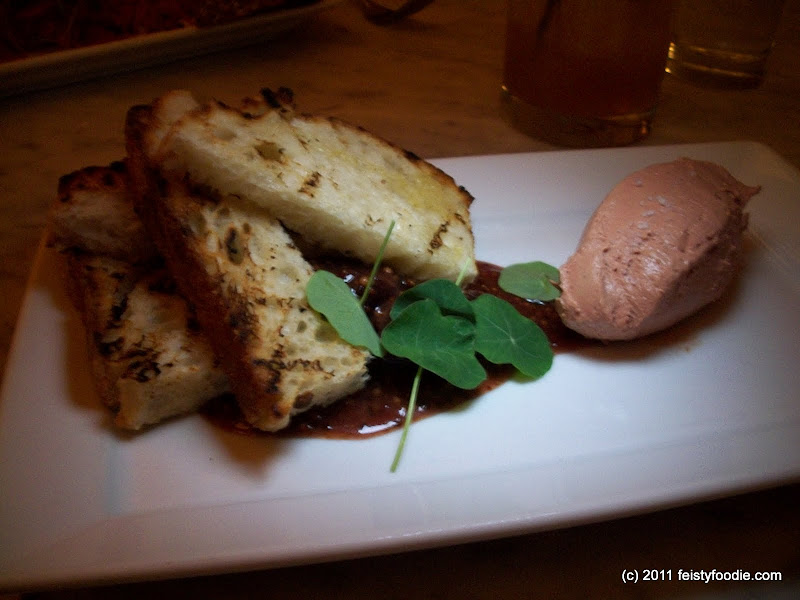 CT says: This was perfect! Not too rich, nor heavy. But a smooth, creamy texture that was just perfect on the toast. Definitely enough to share among a few friends, though I think I did pretty good justice to it on my own.

Since the other option was a salad, I went with the French onion soup with vidalia onions, bacon-chicken broth, and cheese crouton. Quite unlike me to order this soup, but it was delicious. The crouton was a bit too large so it soaked up way too much of that yummy broth. The soup also wasn’t hot enough to melt the cheese which was a little disappointing. 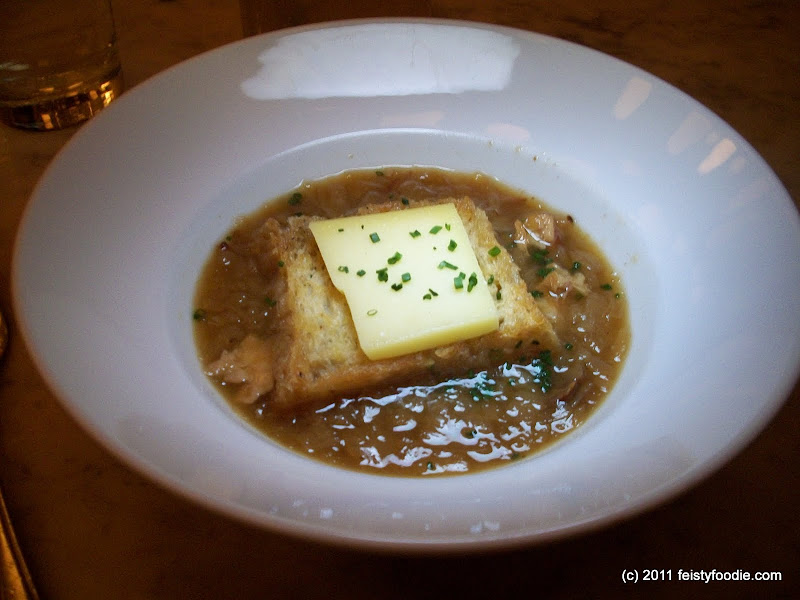 Our entrees came with a beer. Mine came with the Lagunitas Pils and CT’s with the Full Sail Session Black lager. Both were quite good beers. I had to comfort CT in the fact that the Full Sail was actually a relatively light beer despite its ebony appearance. 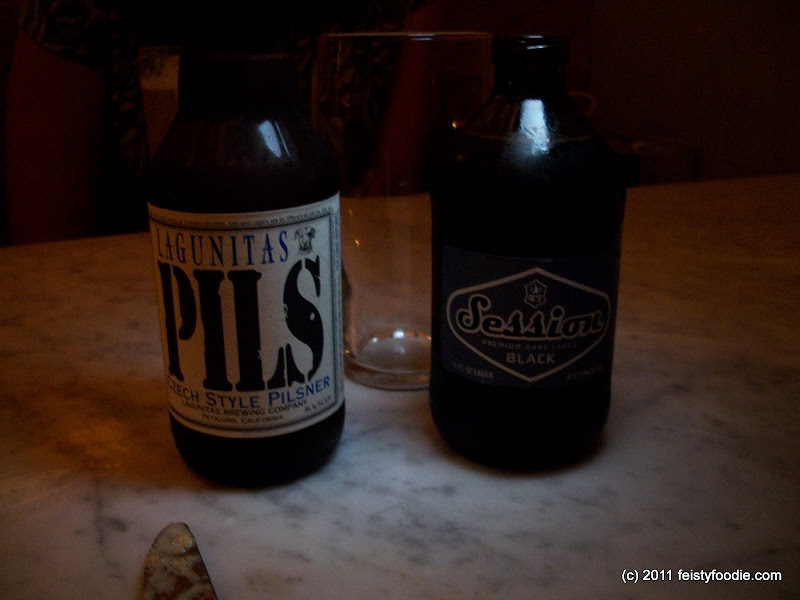 She had the Mole pork sausage with cumin-spiced chicharrones, corn, queso fresco, peanuts, and lime. This consisted of two sizeable sausage links. It was a good porky sausage with a lot of interesting textures from the other items on the plate. Fortunately for me, CT was getting full so I was able to help her finish it. 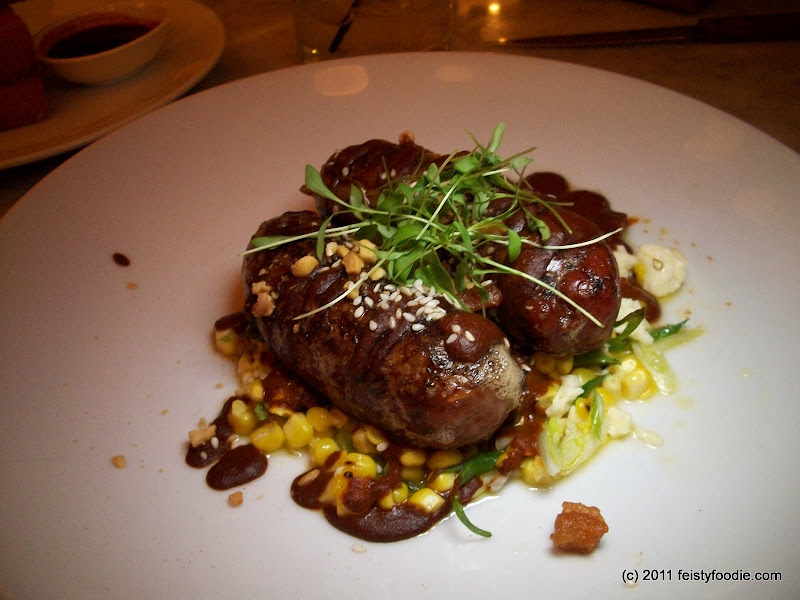 CT says: Another winner with lots of flavors and textures. I would happily eat this again.

Like the appetizers, the third option of entrees was no option at all. Potato dumplings? Pass! I went with the Chile-marinated shrimp with sweet corn-hominy grits, scallions, and baby cilantro. This was a good choice. Although the shrimp could have used a bit more heat, they were cooked perfectly. The grits were also good especially since there were bits of corn and hominy mixed throughout. It wasn’t just a fine puree that is usually the case. 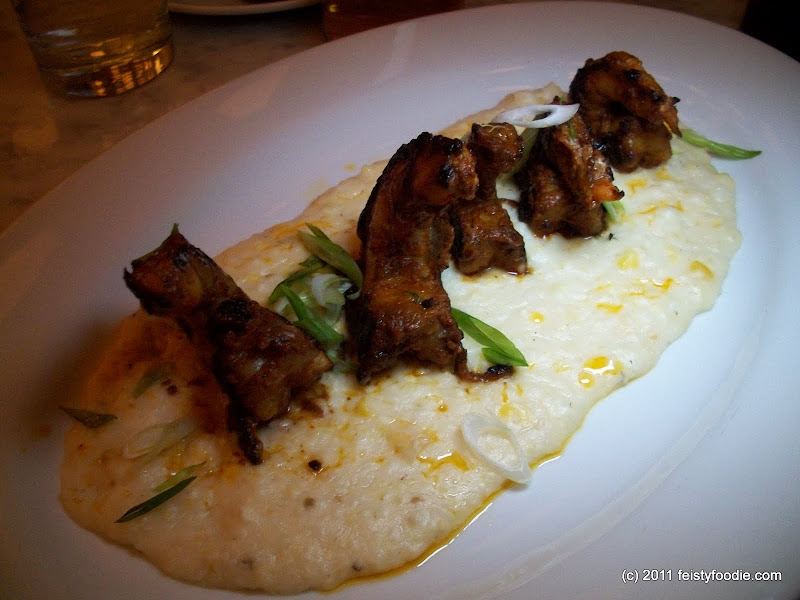 ML had the chopped pork with Char No. 4 mustard barbecue sauce & side of baked beans. She also shared some of this with us. It was very good. The roll held up nicely to all of that pork and sauce. I am a big fan of mustard based bbq sauces. I may have to get this sandwich next time. 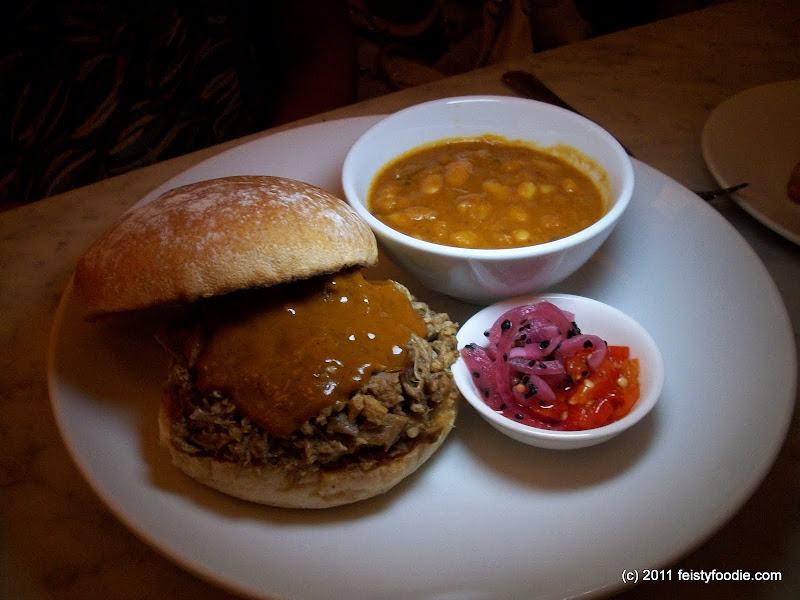 We also ordered a couple sides/small bites for good measure.

Smoked & fried pork nuggets with Char No. 4 hot sauce. These were very good nuggets that were made even better by the extra spicy hot sauce. Crisp on the outside and juicy on the inside. They were 10x better than the similar dish we had at Back Forty. 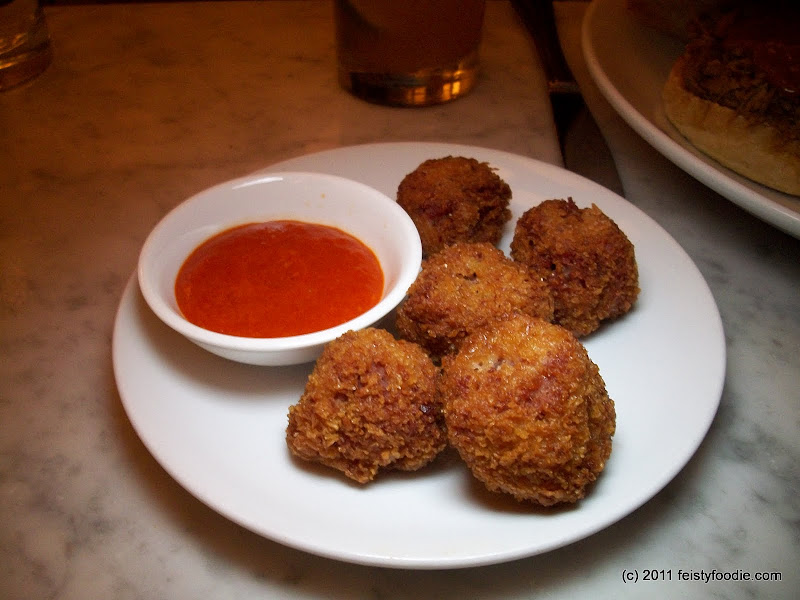 CT says: Agreed! Incomparable to Back Forty, really. There was actual pork flavor in this little things!

Cheddar polenta fries with ancho chile sauce. These were amazing super light and not greasy at all. They were definitely one of the better presentations of polenta fries that I have ever had. 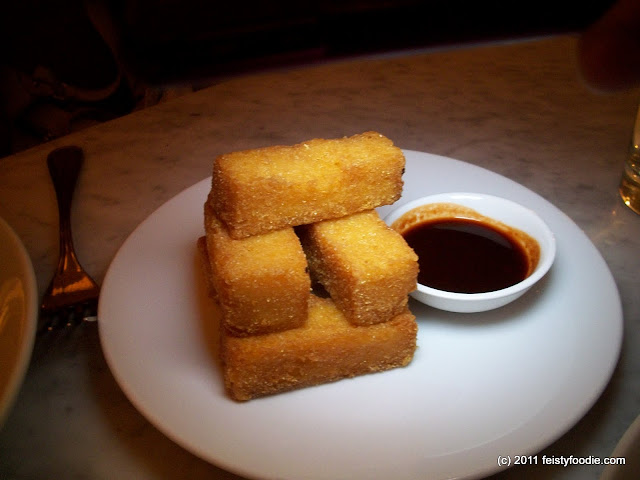 CT says: “Pillowy” is the one word that comes to mind. These were like little polenta clouds. I’ve never had polenta like this and feel like I’ve been missing out. So good.

There were no options for dessert. Simply some homemade salted caramel ice cream. No complaints there as this is one of my favorite ice cream flavors(along with the rest of the country). This was a very good preparation with the perfect balance of salt and sweet caramel flavor. 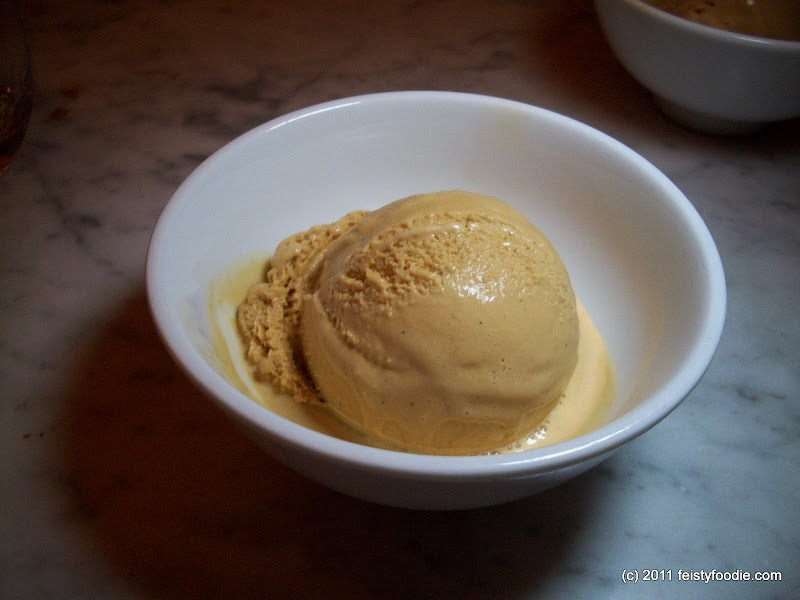 Dessert was paired with a pour of Jim Beam Devil’s Cut Kentucky Straight Bourbon Whiskey. The whisky had a nice bite to aid in the digestion process. 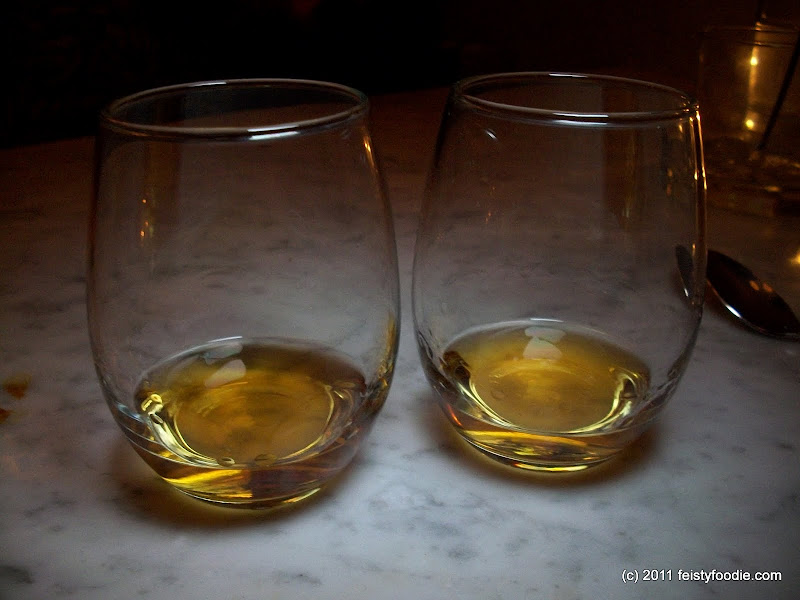 All in all, Char No. 4 was great. Service was good and the food was delicious. Prices were very reasonable, not considering the BBE special, so I would definitely return. Don’t worry ML, we’ll be visiting you and TL often in Brooklyn.