At the beginning of October, CT & I were invited to a special press dinner to preview some new dishes for the Fall menu at Havana Central, a Cuban restaurant in Times Square. I had never been there before, or to their uptown location near Columbia, but it sounded like fun. This is the place that sells $1 empanadas on the sidewalk outside of the restaurant on Tuesdays.

After arriving, we were presented with some classic mojitos and had a chance to talk with the other guests and PR people. The mojito was delicious and not too sugary. I followed CT’s lead and chomped on a little of the sugar cane that was in the glass. 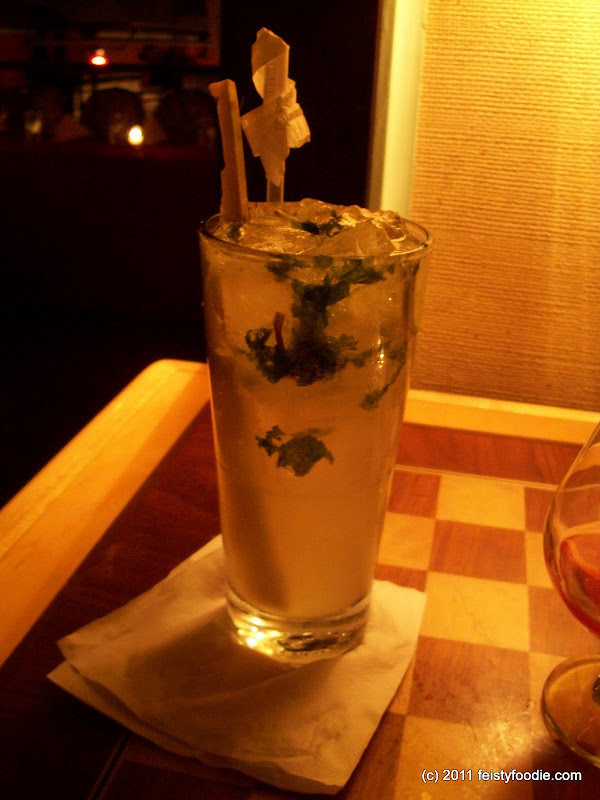 CT says: I always appreciate and well made mojito and I appreciated that this wasn’t overly sweetened.

After we were all seated, the owner of the restaurant, Jeremy Merrin talked to us about the history of the restaurant and its expanding future. Even though the restaurant is huge, he is not trying to be an Applebees or the like and all of the ingredients are fresh and everything is cooked from scratch. The Executive Chef, Stanley Licairac, was also on hand to talk about the menu and Cuban cuisine.

The menu informed us that we would be having a Caribbean Mojito Trio for our beverages throughout the evening. Hmm… I don’t really like to drink sugary drinks with my meal, but when in Havana….

The first mojito was a ginger agave mojito. It was quite an interesting drink. The ginger was very prevalent, as expected, but there was also some sort of odd bubblegum flavor. Maybe the rum? 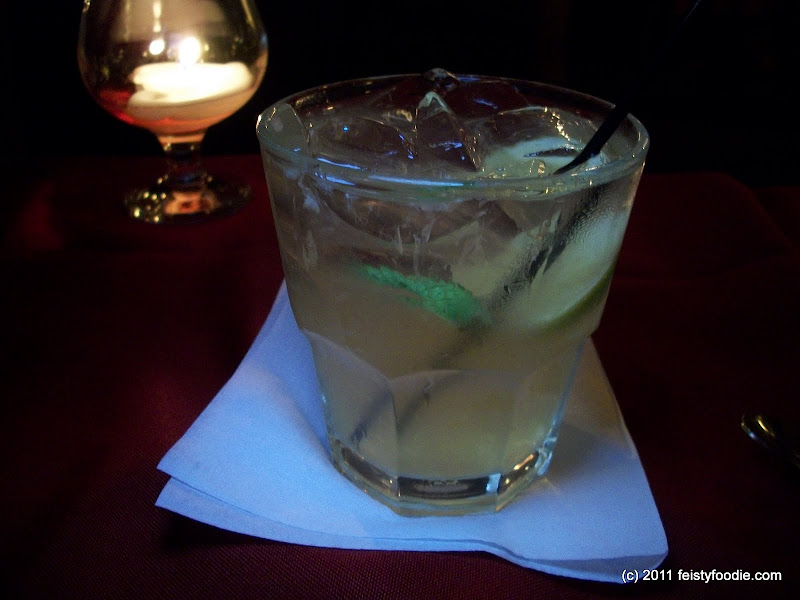 CT says: I thought it was an interesting twist. I’m not a huge ginger-in-my-drink fan. Although the ginger taste was prevalent, it wasn’t dominant so I happy to put this down. Not sure it’s a drink I would order based on personal preference, but definitely interesting to taste.

The PR representative mentioned to us earlier that we may have to be rolled out of there by the end of the night. Once we saw the menu, we understood why. 7 courses! Ramblers, let’s get rambling! 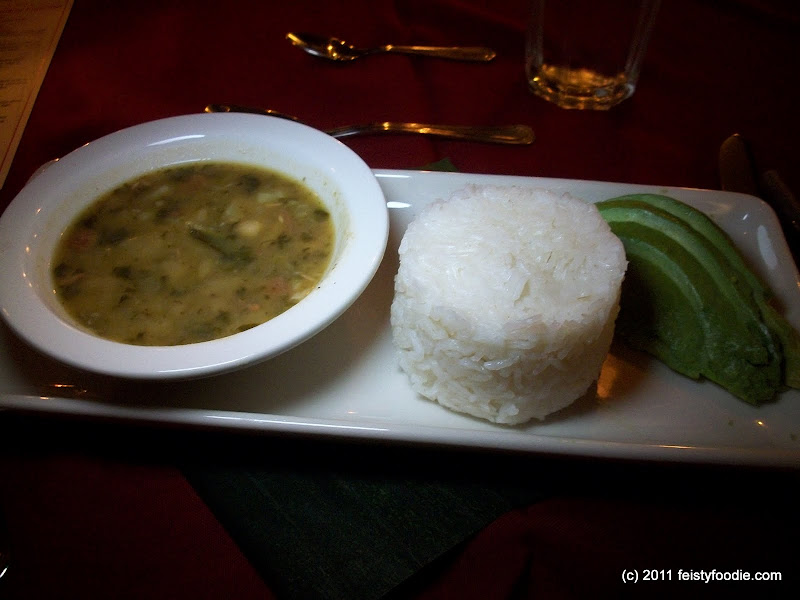 This was a great way to start the meal. Although the stew was a little cold by the time it was served, it was still delicious. It tasted even better with some rice and avocado in the same bite. This would be a great dish to make in the crockpot on a crisp Fall day.

CT says: This was such a home-y dish and just delicious! Not too salty, like lots of soups tend to be. I liked the avocado served on the side too, so it didn’t get mushy. This was definitely something I would pick up for lunch on a cold or rainy day…if I worked in the area. 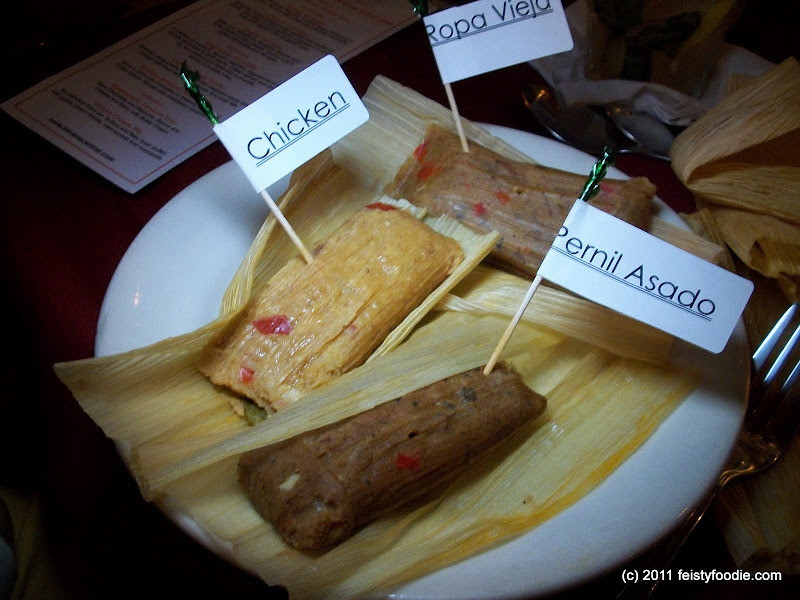 Chef Licairac explained to us that he made these tamales differently than usual in that he mixed the proteins in with the masa rather just place a bit in the center. Smart use of labels! I thought the pork was the best as it was the most flavorful. The garlic mojo was pretty strong so just a dash was all that was necessary. I only took a bite or two of each as there was so much more food coming.

CT says: I really liked this style of tamale. I’m not usually a big fan, as I don’t like large spoonfuls of masa with just a little filling that you have to dig to find. Though the proteins could’ve been spiced a tad more, this was definitely something I could try again. 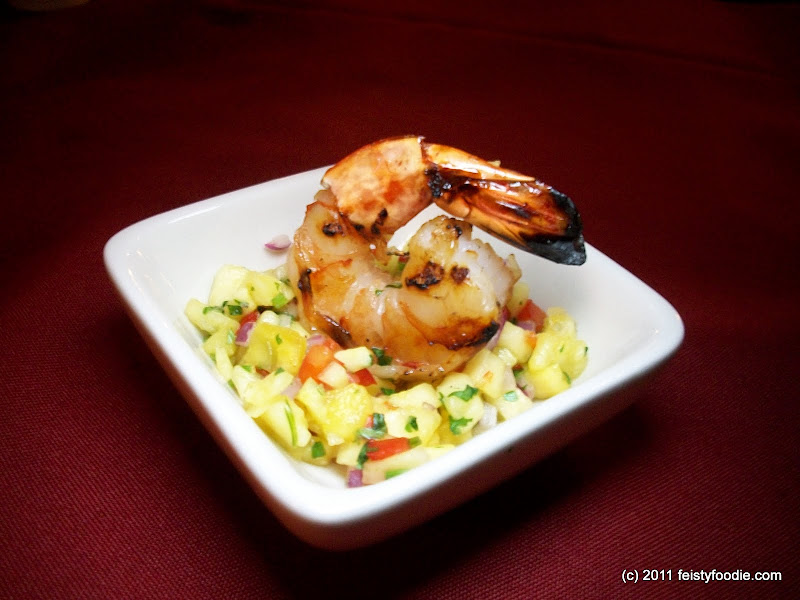 I was already getting Mojito’d out, so I didn’t appreciate the cloying sweetness of the glaze on the shrimp. The grilled pineapple pico de gallo, other the other hand, was fantastic. Super fresh flavors and great texture.

CT says: This was a nice, light bite after the heavier starters. It would make for a nice shared appetizer, but a plate on its own might be too much sweetness at the beginning of the meal. 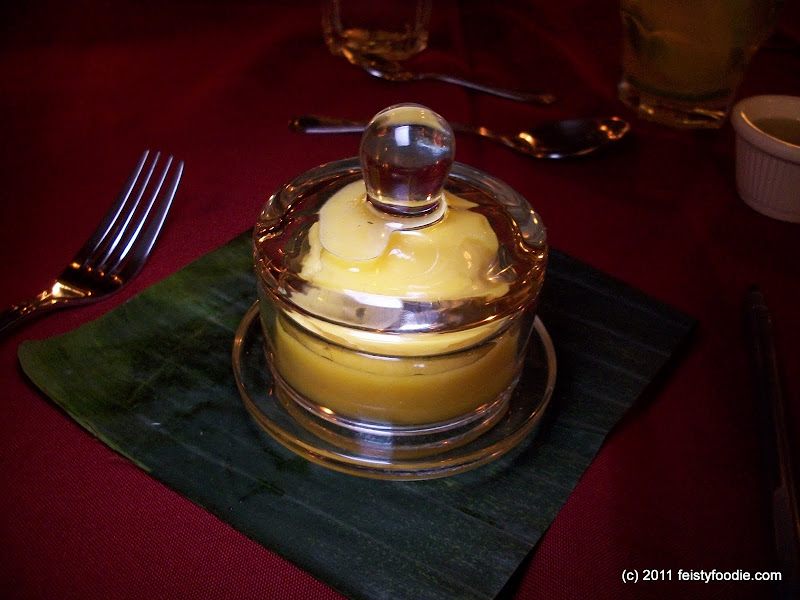 CT says: Umm… more passion fruit sorbet?! YUM! I was ready to finish the bowl and call it a night. But then somebody pointed out it was just a palate cleanser and not supposed to be finished. But I say, then why make it so yummy?!! I hope this makes it to the dessert menu!!

Our next mojito was Green Apple. Quite a impressive way to bring together two seasons, since I consider mojitos to be a Summer drink. This was an ok drink but also had that strong bubblegum flavor. 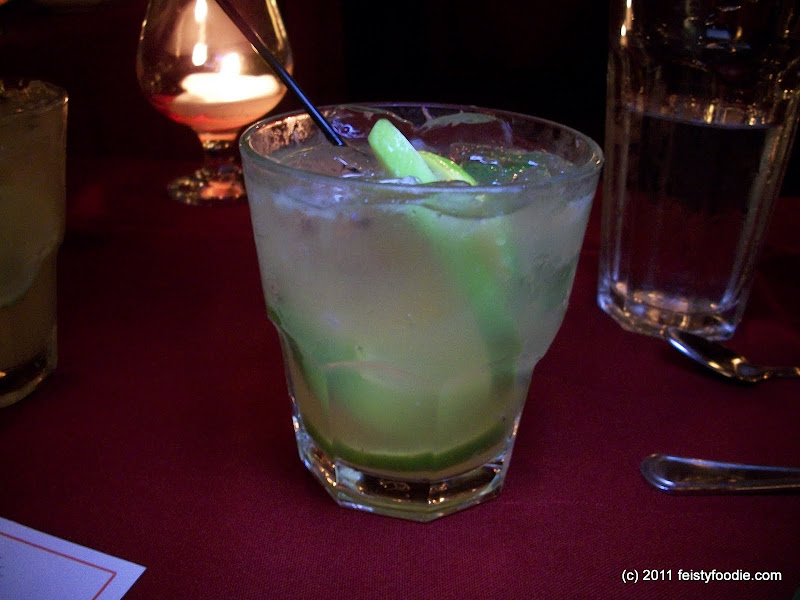 CT says: Crisp and not sickeningly sweet like apple-tini’s tend to be. They did a good job blending the flavors. That said, I would still stick with my classic mojito.

The servers eventually brought out some hot sauce for us to kick up the spice as we pleased. 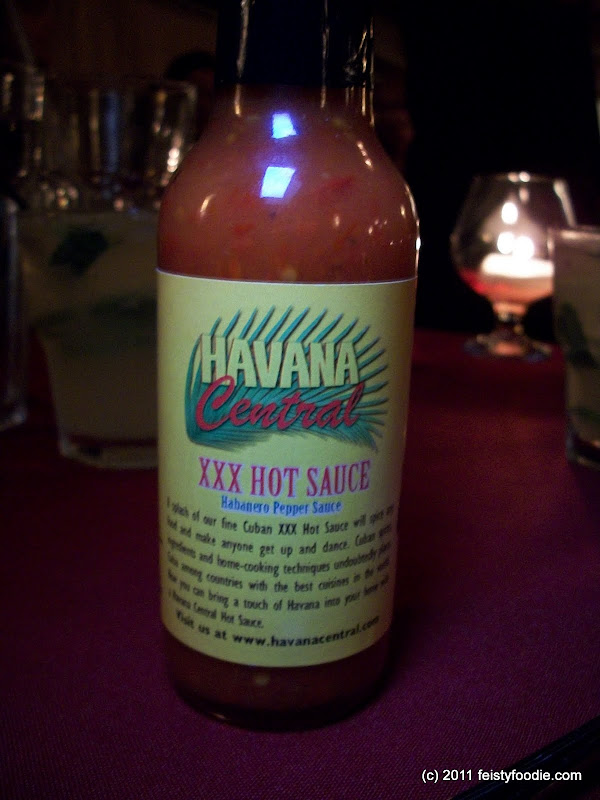 Vegetable Picadillo- A medley of zucchini, squash, peppers, eggplant and red onions marinated in fresh garlic, Cuban spices, and olive oil, fire roasted and diced into a picadillo, served in a yuca crisp. 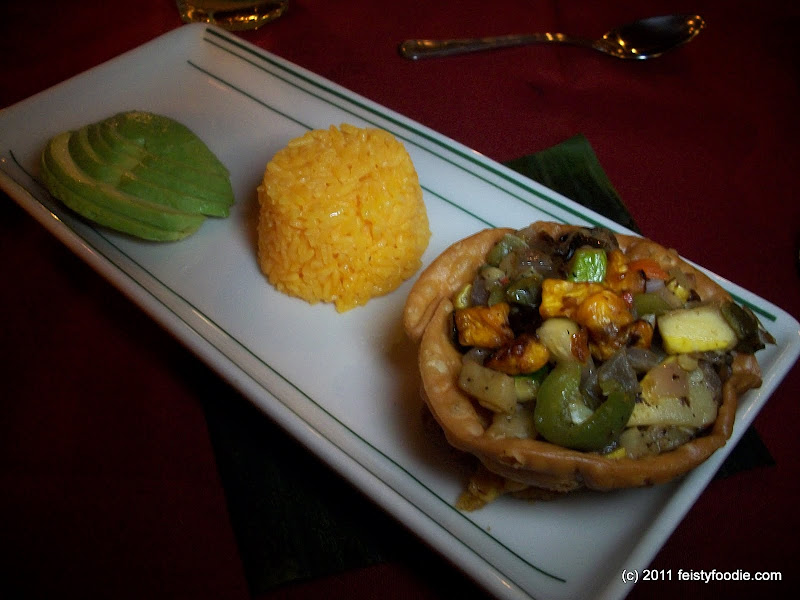 This was quite an interesting dish. I’m not sure if it would really qualify as an entree, but the veggies were still very tasty. The squash was the most predominant flavor, which was a “Welcome to Fall.” Sliced avocado is always welcomed on my plate so I didn’t mind seeing this again. I also enjoyed the yuca crisp, which was like a taco salad shell but better!

CT says: The yucca crisp was probably my favorite part. I would enjoy this is a smaller portion as a side dsh to a main entrée. As an entrée itself? Maybe not. It was just roasted veggies.

Jeremy informed us while we were eating this of a special treat. Underneath the yuca crisp was a bit of fufu, which was mashed plaintains, cinnamon, and other spices. It was a nice little treat that reminded me of pie filling that was also useful in holding the crisp on the plate. 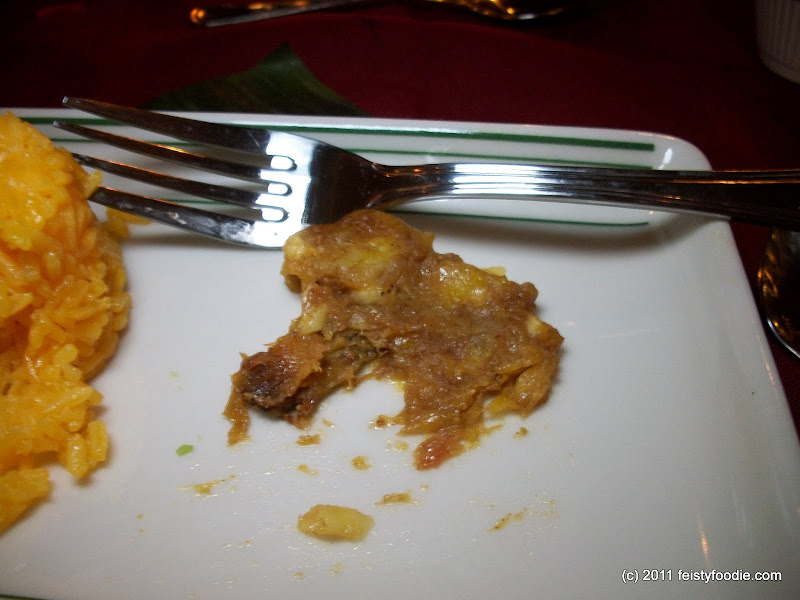 Fideua (Pasta Paella)- Spanish pasta paella, lightly toasted cappalini pasta slow cooked with fresh fish stock, chorizo and shell fish. I heard of paella that uses pasta instead of rice before but never tasted it. It was brought out in large cast iron pots and then portioned out to each of us, hence the ugly presentation. I had a couple bites and was not a fan. The pasta was too mushy and the shellfish was a bit bland. I was already getting pretty full at that point so I wasn’t too upset about leaving an almost full dish. 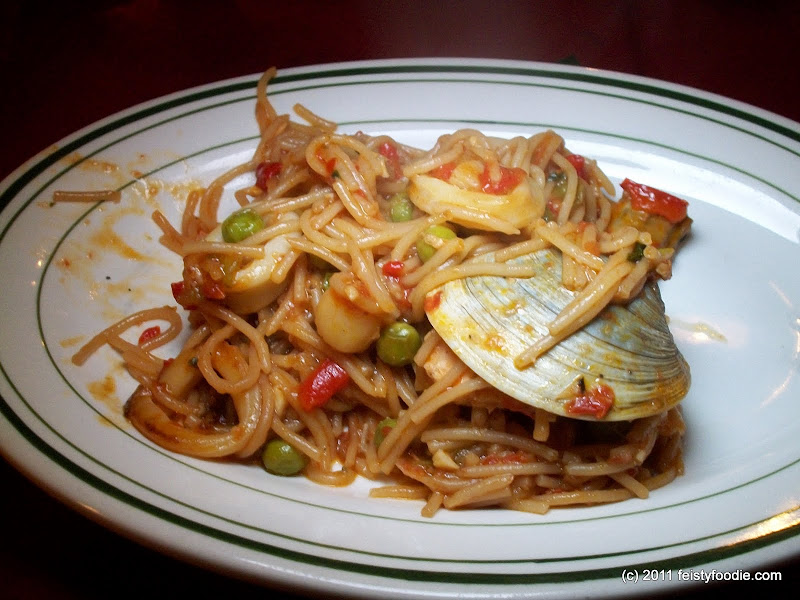 CT says: I liked the concept, but I was too full by this point to continue eating overcooked pasta. However, this seems like a difficult dish to produce for a large group, so I would be willing to try again. The shellfish tasted pretty good, so I picked out those pieces. 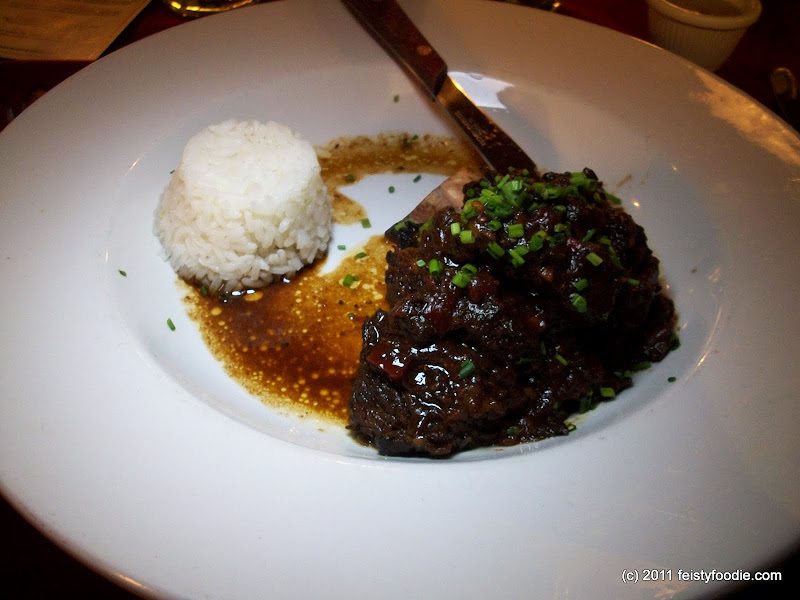 Why does the food keep coming out? Is this Castro’s grand plan? Why? Why? Anyway, the short rib was super delicious and tender. Too bad I wasn’t able to eat very much of it. We thought about asking to wrap it up but no one else seemed to be doing that so we didn’t either. What a waste!

CT says: This was definitely the best entrée, by far, hands down. SO GOOD. If you go here, this is the must-order item of their fall menu. I forced down about half the dish before surrendering to my overstuffed tummy, it was just so sad to see it go to waste.

Before dessert we were served our last of the mojito trio. This one was a rosewater mojito. I am not very familiar with rosewater, so I was a little taken a back by the medicinal flavor. It ended up working well as a digestif. 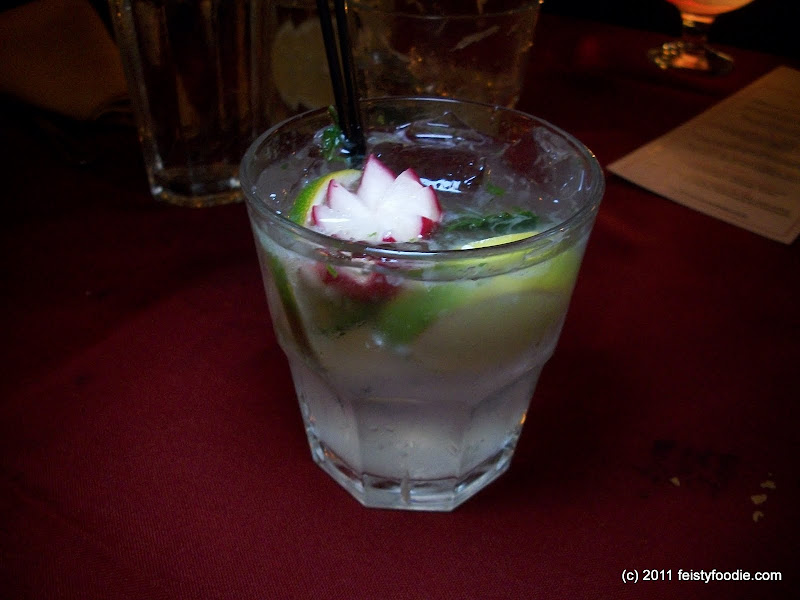 CT says: I’ve had a good amount of rose water in my life, but usually in very small portions. So, I actually really liked this last mojito. The rosewater flavor was very prevalent, so be warned, but if you like it, definitely try this.

Because our host hates us, we were given TWO DESSERTS! Fortunately, they were plated to be shared. 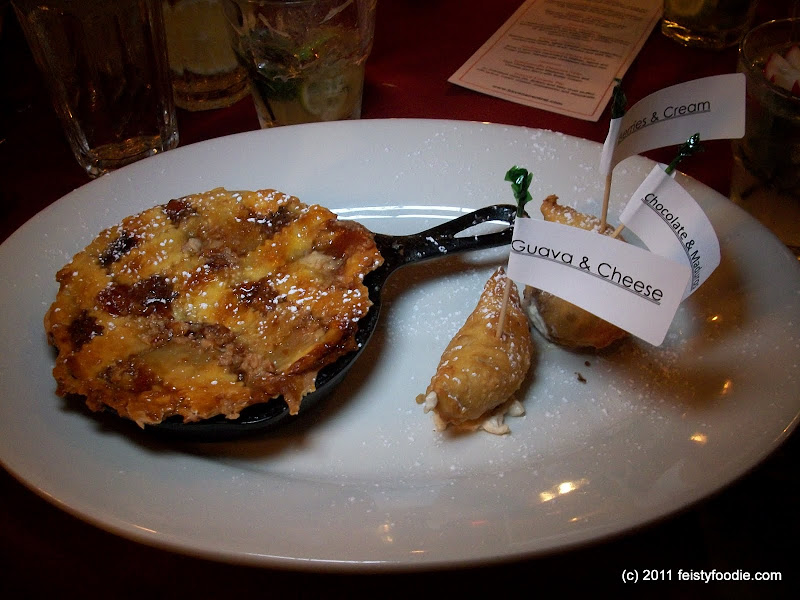 I think the guava and cheese was my favorite.

CT says: I loved the guava and cheese, though the chocolate and maduros was a close second. Berry and Butter? Forgettable. Sweet empanadas was such a great idea!

I’m not sure if there was actually mozzarella in the pie or if it was a typo. Regardless the filling was very similar to one of the empanadas that I already ate, so I only had a small taste of this.

CT says: Another win in my book. Although, both the pie and empanada were probably unnecessary since they were similar in flavor. My vote would be for the empanadas.

We also were surprised with a swag bag on the way out. 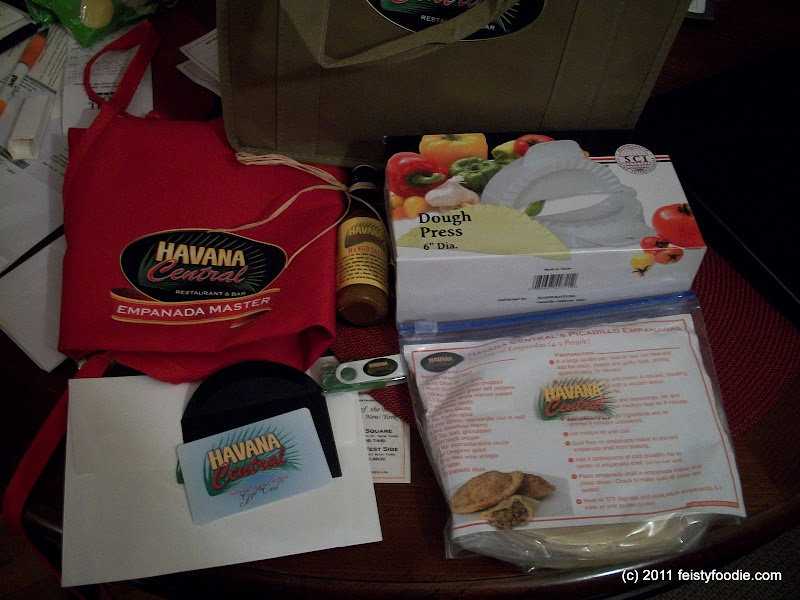 Included was an empanada press, pack of pre-made empanada dough, apron, thumb drive, small bottle of hot sauce and a gift certificate to return to the restaurant. The only problem is that I have no idea how much the gift certificate is worth.

All in all, I was very impressed with the food presented to us. Most of the Cuban food that I have been exposed to has been on trips to Sophie’s/Tina’s, so it was nice to try something new. While not all of the dishes I sampled may make it on the menu, I hope the short rib does. Thanks to Jeremy and the Havana Central staff for hosting us. I look forward to returning to try some of the more classic Cuban dishes, even if I have to claw my way through the tourists in Times Square.

Please note that everything was courtesy of Havana Central. I received no monetary compensation for this review, nor was I obliged in any way to post about the food and drink, positively or otherwise. This is my own opinion and I feel it was unbiased; you are free to take from this what you will.