It has been a while since we last had dim sum, so CT and I made plans to go one Saturday morning. Yvo has raved about the recently renovated Nom Wah a couple times, so we decided this would be where we would get our “fix.” CT actually had been to Nom Wah before with our friend, TX, but I was under the weather at the time and wasn’t able to go. This ended up being a repeat of Lung Fung as CT’s parents came with us with dim sum cravings of their own. We arrived at 11 and had no problem getting a table, unlike some of the larger banquet style places in Chinatown.

As Yvo mentioned, Nom Wah’s dim sum is ordered via a checkoff menu rather than pointing at items on a cart. They also have a menu with pictures of each dish, which definitely came in handy for non-Chinese like us. Fortunately, the kitchen has a lot of dishes almost ready to go, so it wasn’t too long of a wait for food. As the name indicates, they have a nice selection of teas to go with your food. CT’s Mom ordered a pot of delicious Jasmine tea for the table.

Shrimp Rice Roll. The shrimp were fresh and tasty, but the roll was pretty thick and gummy. 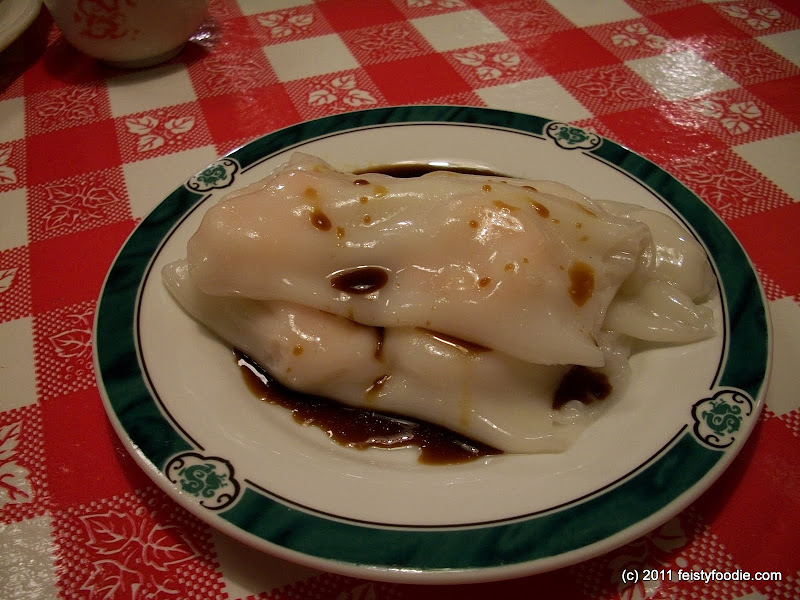 Fried Crab Claw. We weren’t really sure what to expect when we ordered this, so we took a chance. As you can see, it was quite interesting looking. It was large enough to split in half to serve two people, so we only ordered one more. 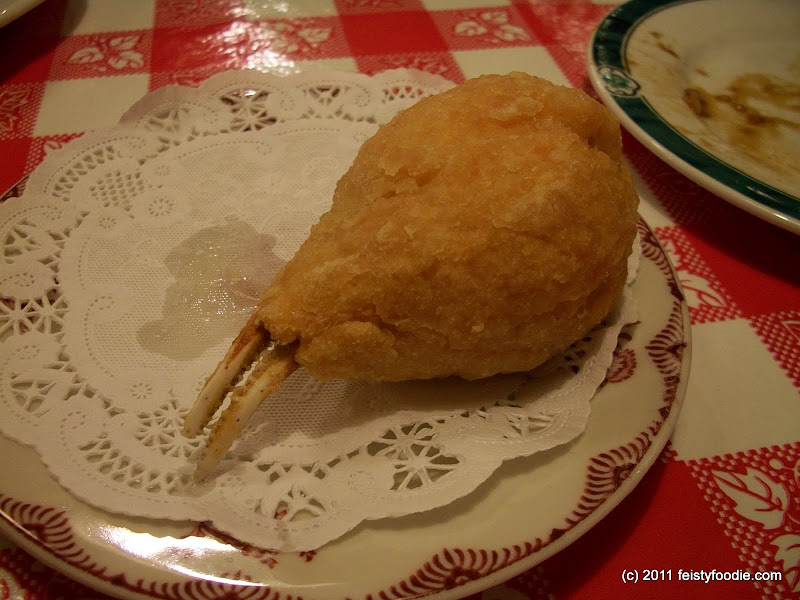 The innards had a ton of fresh, sweet crab and I think some chopped shrimp. It was quite delicious although a bit greasy on the outside. 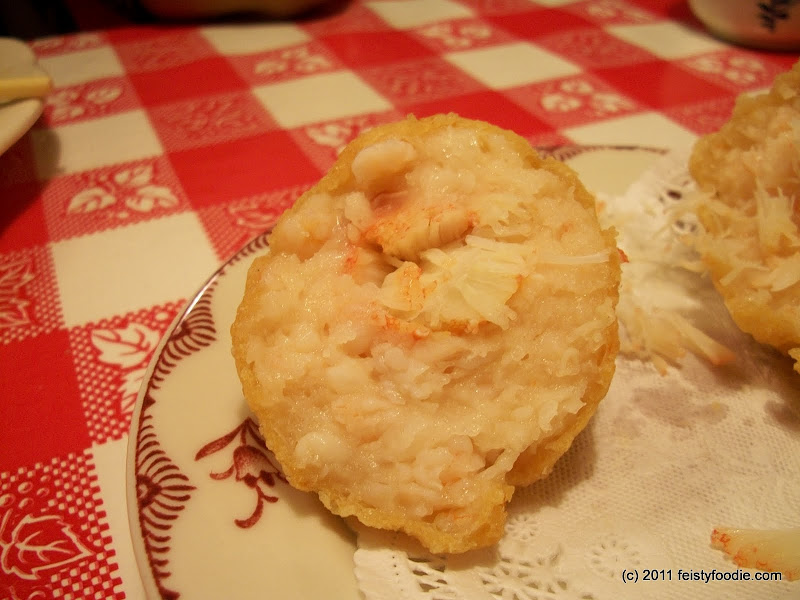 House Special Pan Fried Dumpling. These were hit or miss. My dumpling had a thick wrapper that wasn’t very good, while CT’s dumpling was much thinner. The innards were tasty so that’s all that mattered. 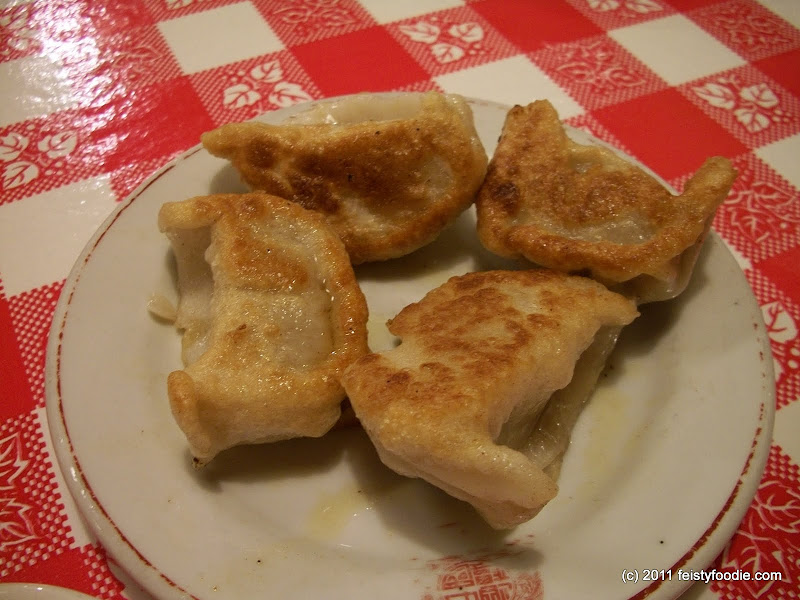 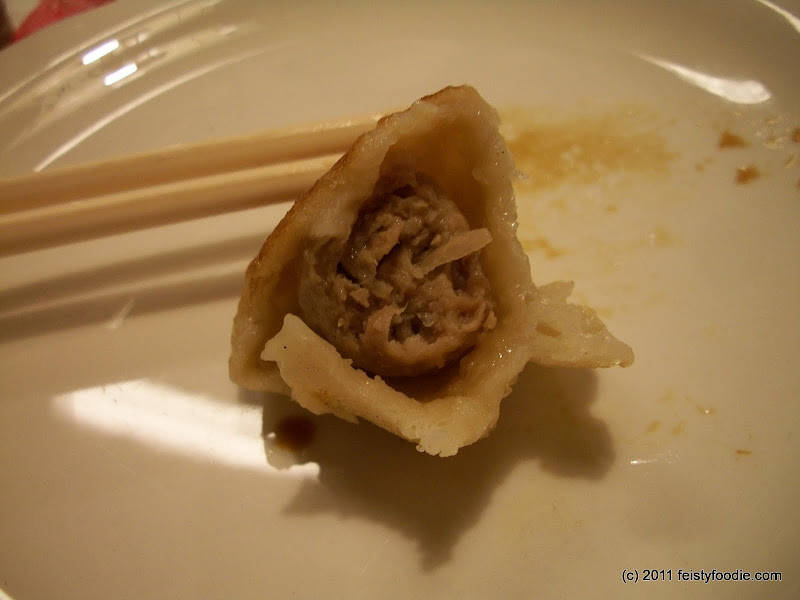 We ordered two pork buns. They were quite large and more than enough for the four of us, especially since CT’s Dad isn’t a fan of any pork bun. The pork innards were tasty, while the bun was nice and fluffy. 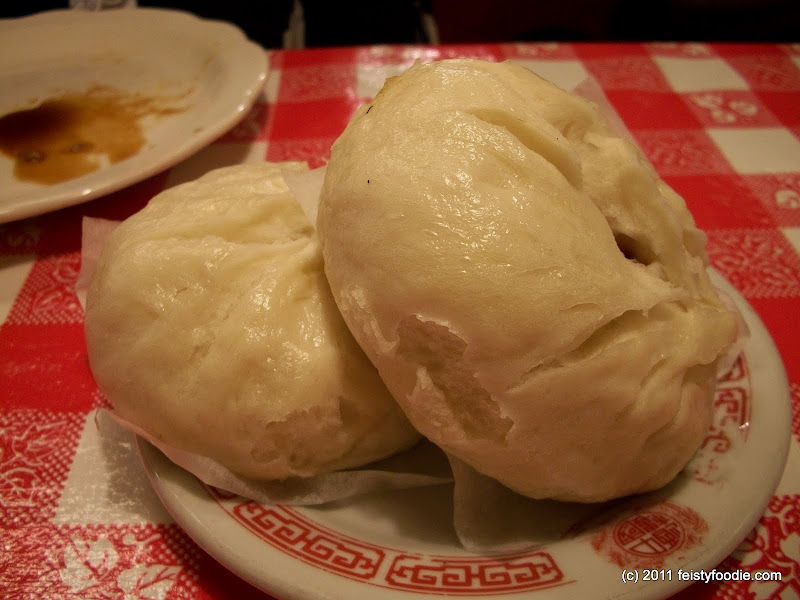 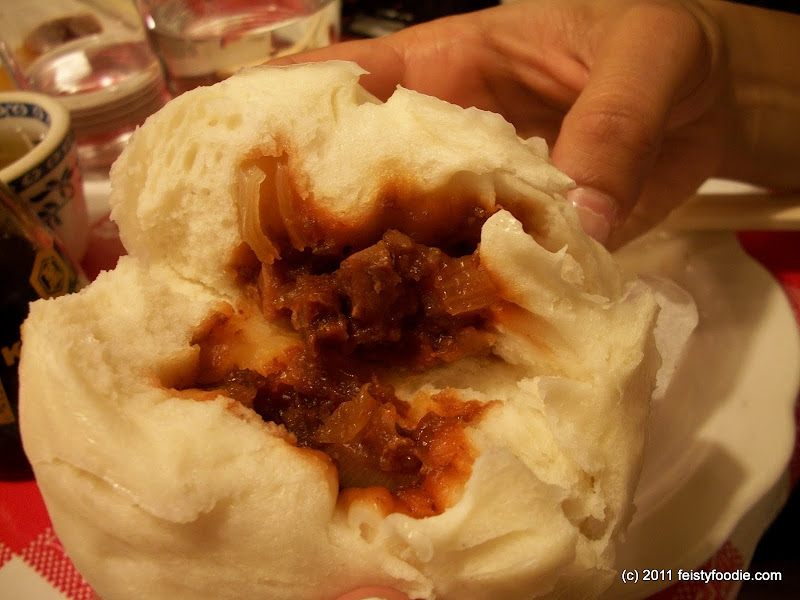 Salt & Pepper Shrimp. These are quickly becoming my favorite dim sum dish especially when the shrimp were as large and sweet as they were here. They were fried perfectly as to retain some of the juiciness of the shrimp. The chef also used a light hand on seasoning so I didn’t feel the need to drink a pitcher of water as I have had at other restaurants. 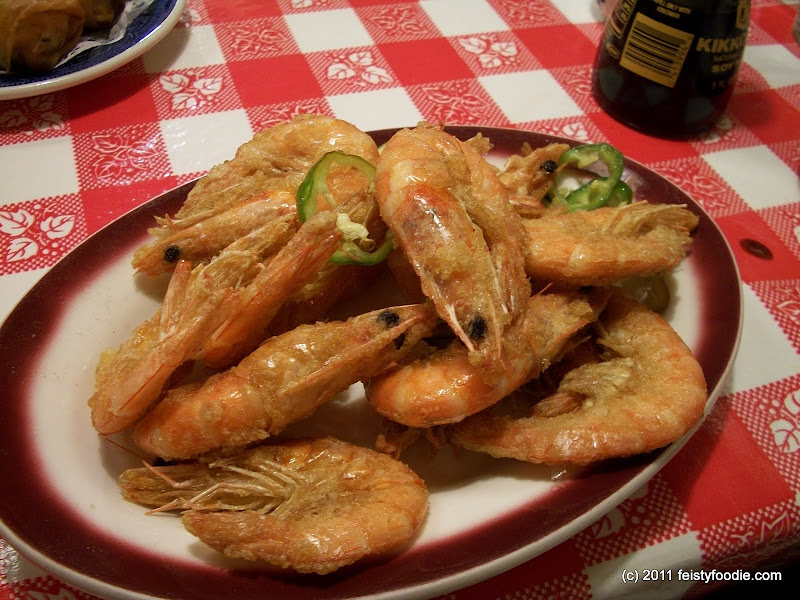 Spring rolls. Crispy outside that was pretty greasy with nice veggies on the inside. 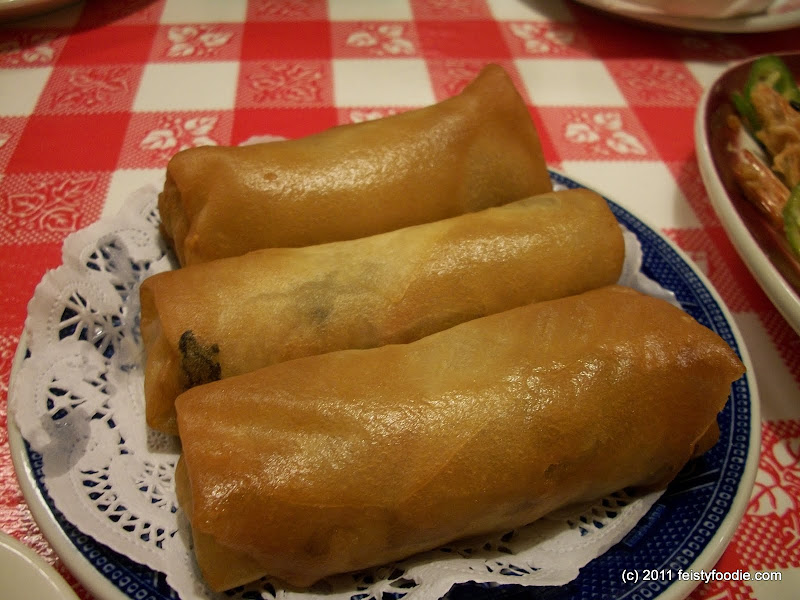 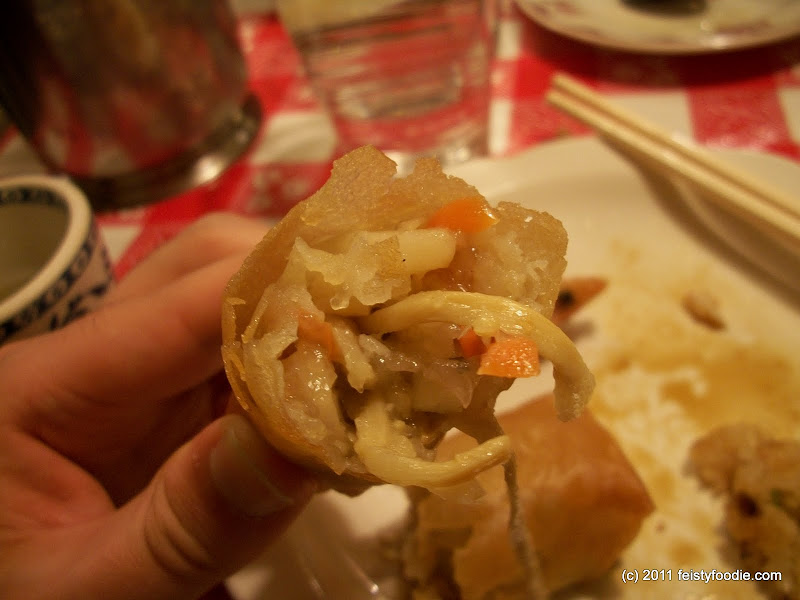 Shrimp and Chive dumplings. These ended up becoming an afterthought for the table, but were quite interesting. The tapioca starch wrapper was quite unique and very chewy. The innards has some nice deep green chives and pieces of shrimp. 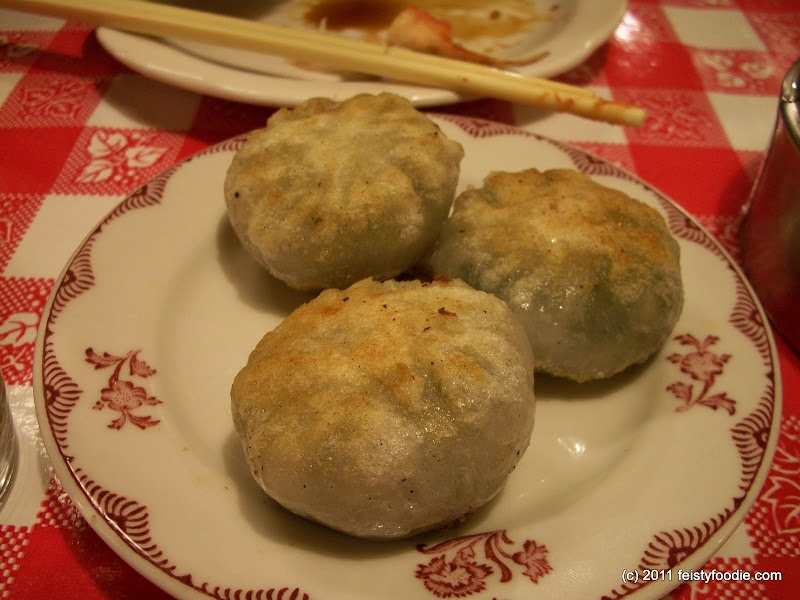 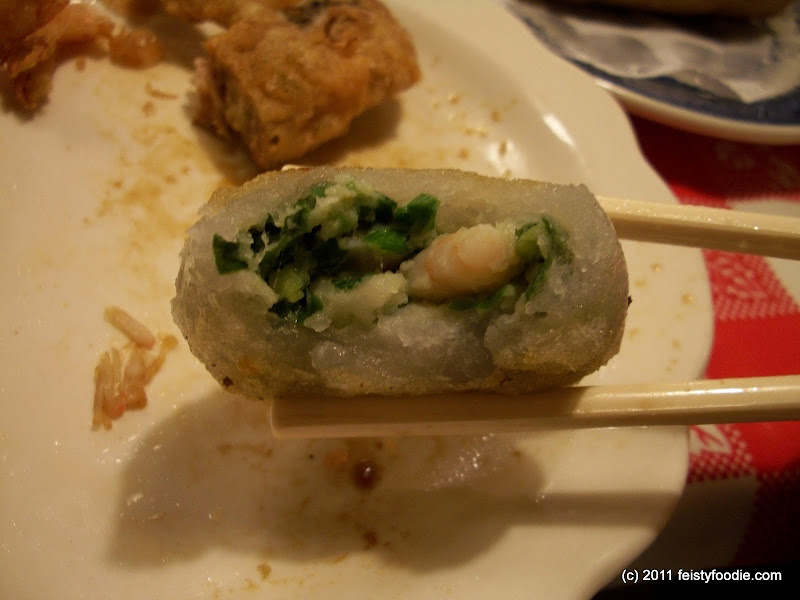 Shrimp Sui Mai. These were excellent sui mai. Again, more of that delicious shrimp. They were quite juicy and flavorful. Definitely order these if you go. 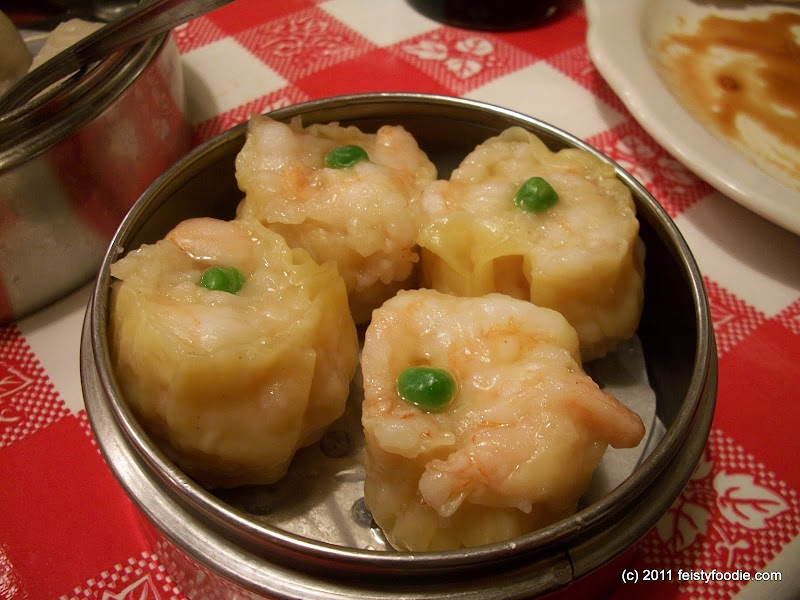 Shanghainese Style Soup Bun. I have actually never had soup dumplings before and this was not the place to try them. They were quite small and did not have much broth inside, but as a dumpling it was quite tasty. 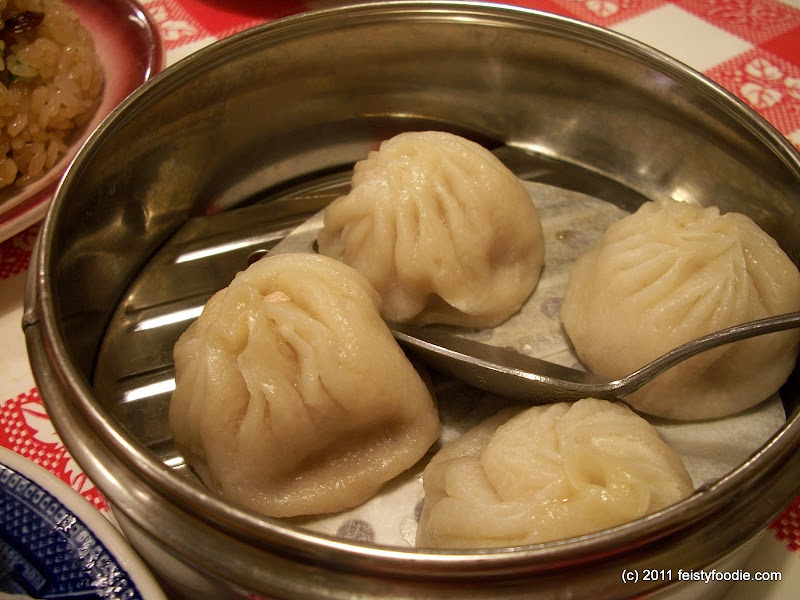 Sticky Rice w/ Chinese Sausage. They had lotus leaf wrapped sticky rice on the menu, but it said it was with chicken. At other dim sum restaurants, the lotus leaf sticky rice as Chinese sausage, so I thought that this would wrapped in the leaf too, but it wasn’t. Regardless, it was still delicious and I particularly enjoyed the ribbons of egg on top. 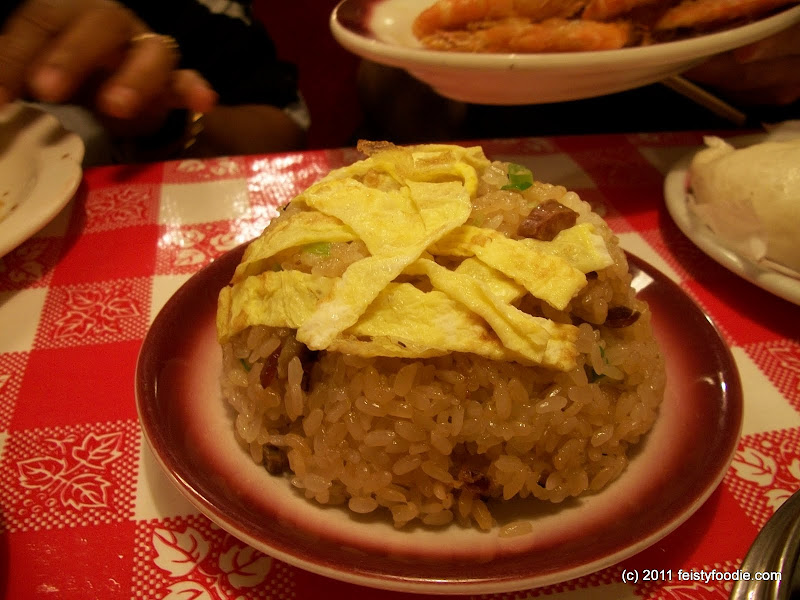 Salt & Pepper Pork Chops. I believe it was around $8 for this huge pile of pork. This was the last dish to come out so we were all quite full already. I found some extra room to scarf down more than my fair share of this since the others threw in the towel. The chops had a lot of meat and not very many bones which gave us our money’s worth. 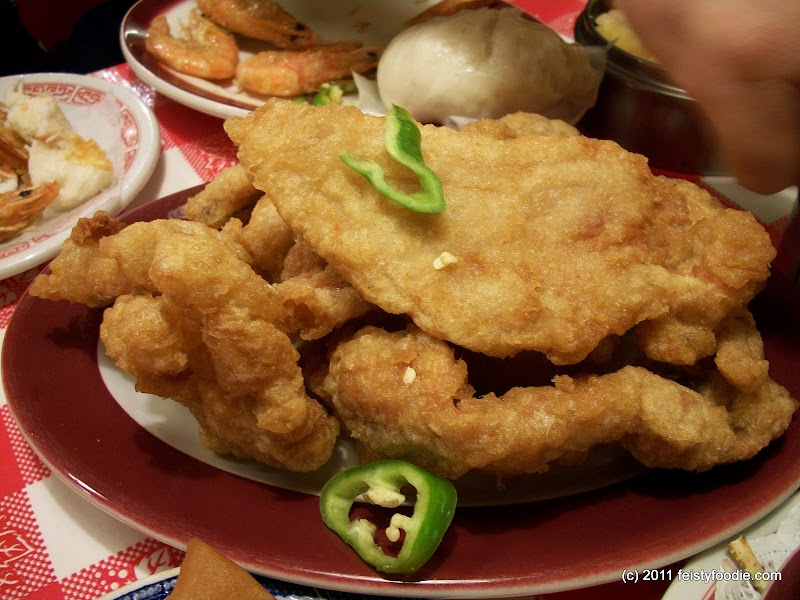 All in all, Nom Wah Tea Parlor had some excellent dim sum. I really enjoyed the old fashioned look of the place, but wasn’t run down. I definitely recommend this place at any time of day since the food is ordered a la carte. I will be back here anytime I have a dim sum craving that can’t wait for a weekend morning. Thanks to CT’s parents for treating us.