My FBM family is awesome, as are our once-every-few-months potlucks.  October’s potluck took place at Beer Boor’s, and as usual… I was the first to arrive. 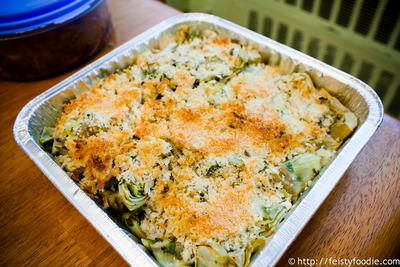 My artichoke gratinata, which I took issue with the way it came out, but I always hate what I make so I try to keep quiet and let other people just eat it.  If they like it, great.  If not… well… I didn’t like it either. 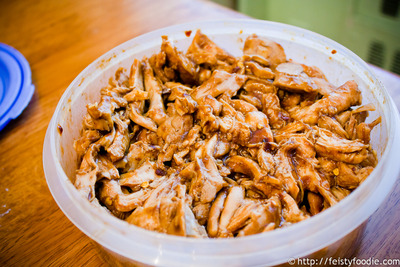 My kickin’ chicken, which was unevenly spiced unfortunately… I heard someone comment that they got a big chunk of spice in one bite but the rest was a bit bland/mild.  I have trouble cooking for large crowds.  That’s my excuse and I’m sticking to it 😉 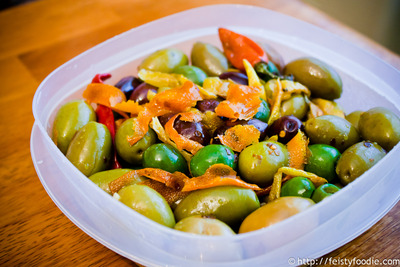 KC made an olive mixture that I heard was fantastic, but I somehow never found myself with any olives… 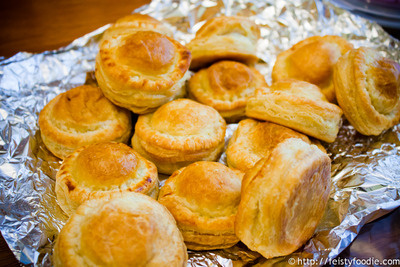 Dean made pate chaud puff pastry things.  These were really good.  I would have eaten more than one… 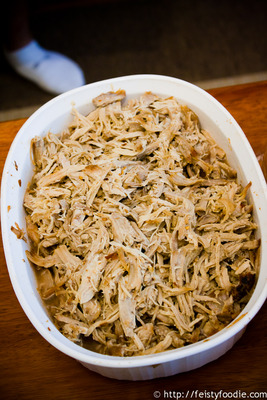 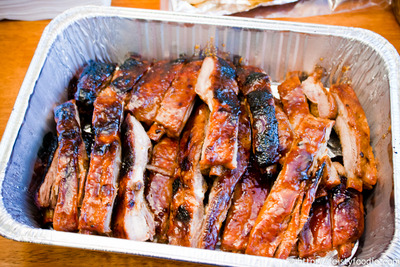 Hungry made Chinese ribs… which I really wanted to eat more than one… tasted just like my mom’s!… but… I failed to do so. 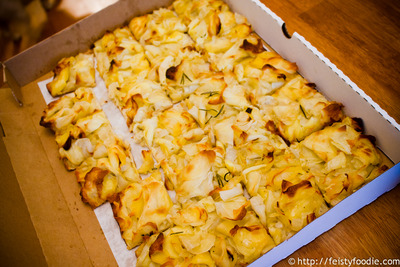 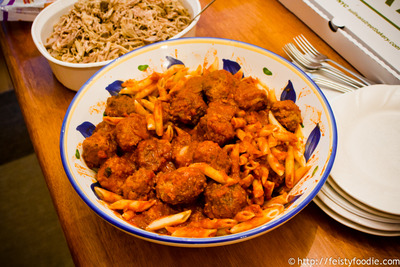 KC also made the most glorious of all, macs&meatballs!  So effing good.  I love homemade sauce and meatballs… and hers were fantastic. 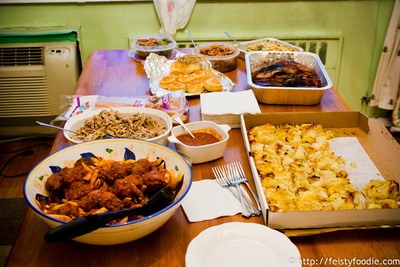 By this time, I’d gotten deep into the wine and though many people hadn’t yet shown up, I took a picture of the table because I didn’t think I’d remember later.  I was right. 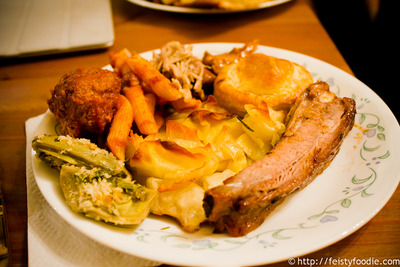 Picture of my first plate.  Love that rib!  Unfortunately, I wound up getting deep into the alcohol and though it’s not unusual for me to drink excessively at these parties, it is incredibly unusual for me to misbehave the way I did and wind up throwing up repeatedly (in the bathroom at least), then passing out in the host’s bed for hours upon hours.  I’m still really ashamed of my behavior, even after apologizing to everyone… I missed so much of the potluck.  That really, really sucked.  (I blame a combination of not eating that much, drinking way too much, and having lost a bit of weight recently leading to being unable to handle my liquor.) 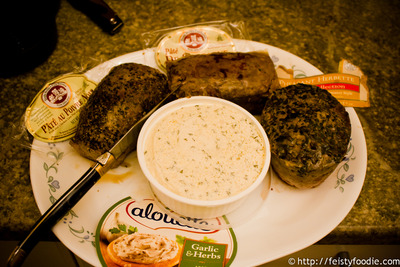 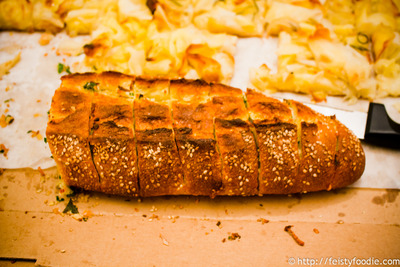 KC also made garlic bread to go with the macs&meatballs. 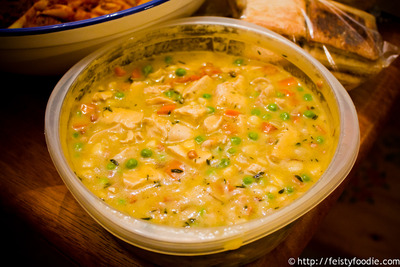 MadJac made chicken pot pie – in the top right of the photo, you can sort of see the biscuit tops she brought for the filling.  I chose to eat it plain though, since I don’t like the pie part of pot pie anyway.  Yum! 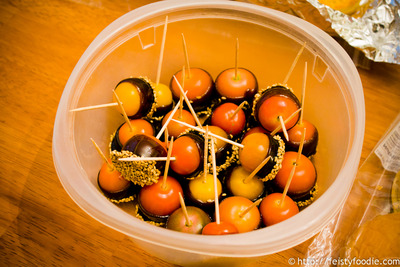 She also made candied cherry tomatoes, which squirted happily into the eater’s mouth. 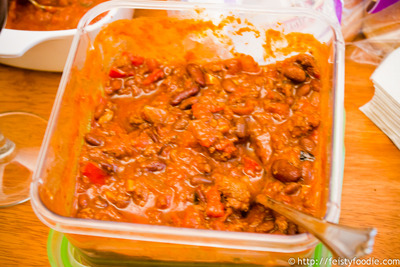 Sir Eats-a-Lot brought chili, which somehow didn’t make it into my belly… 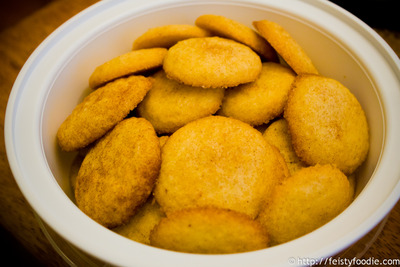 CT made snickerdoodles, which did, and I tried to steal the whole container.  Crisp edge, chewy center, fabulous. 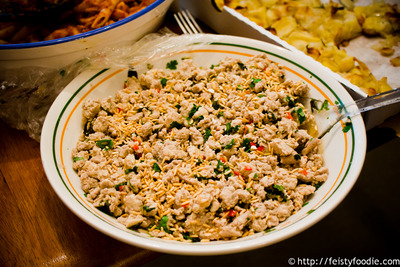 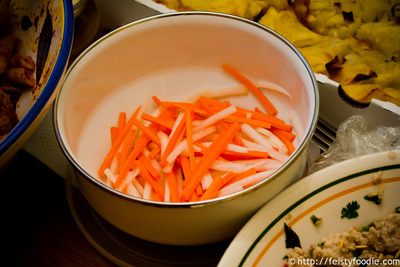 along with some pickled veggies. 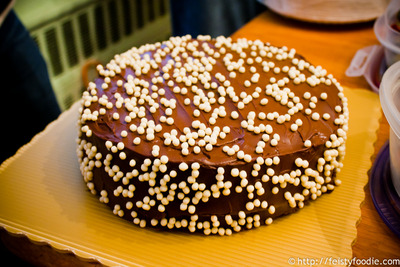 Hungry once again made a cake – I’ll pretend it was for my upcoming birthday – and while I foolishly was unable to try more than a bite while super inebriated, I know it was moist. 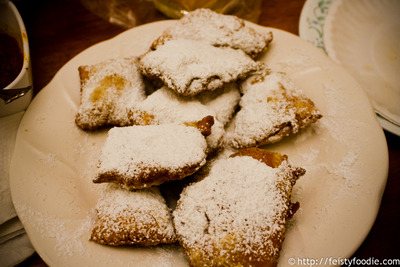 She also once again made beignets, which I remember eating two bites of one and somehow dropping it like an idiot.  The worst part – and yes, I need to berate myself for this, and publicly shame myself – someone bent down to pick it up, so instead of saying “thank you” or helping clean up the powdered sugar, I walked away.  I really cannot stand when I get so drunk I don’t remember things and am not able to really focus my thoughts… ugh.  Thankfully, my friends seem to have understood something was wrong… I hope… and just brushed it off and had themselves a fantastic time while I tried to sleep off my extreme intoxication in the other room.

Thanks again to some of the most awesome people I know for a wonderful potluck!