Last Friday, CT and I decided to head down to Madison Square Park for dinner. We enjoyed the latest incarnation of Mad. Sq. Eats. and wanted to try some more delicious foods that we didn’t get a chance to on our last visit. We also wanted to check out this year’s Shacktoberfest at Shake Shack. Quite the conundrum… not really since we could do BOTH!

Unfortunately MSE has become too popular so it was quite hard to walk around, let alone try to get seating. However, we did end up getting a delicious Cheddar Truffle pretzel from Sigmund’s to tide us over while waiting at line at Shake Shack. The line moved pretty fast since most people chose to go to MSE. Score one for the good guys! 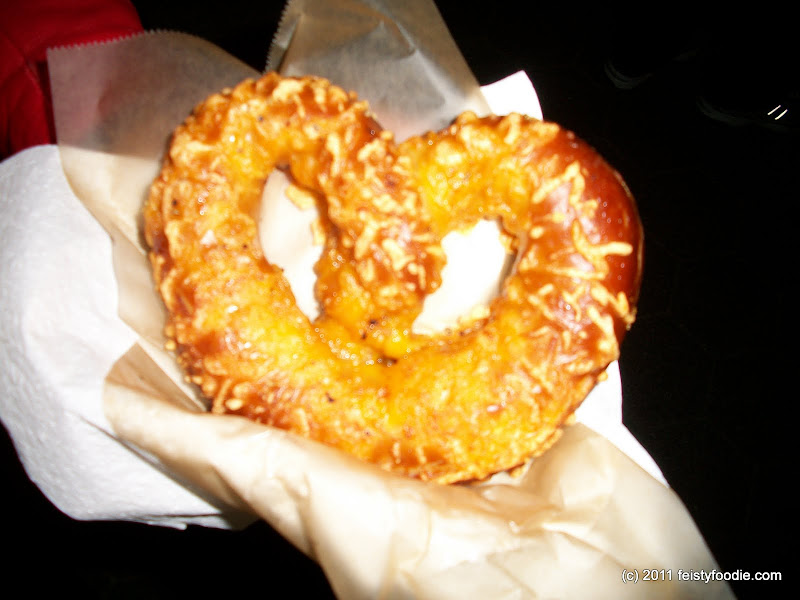 I got a Shacktoberfest stein a couple years ago, but it was more traditional looking. For $12 including beer they were offering these HUGE steins. Not a bad deal if I say so myself. Last time they said there was some issue about serving the beer in the stein so they gave me the regular cup for my beer along with the stein. Fortunately, this was not the case this time around. I believe these were filled with their standard Shackmeister Ale, CT can confirm that. 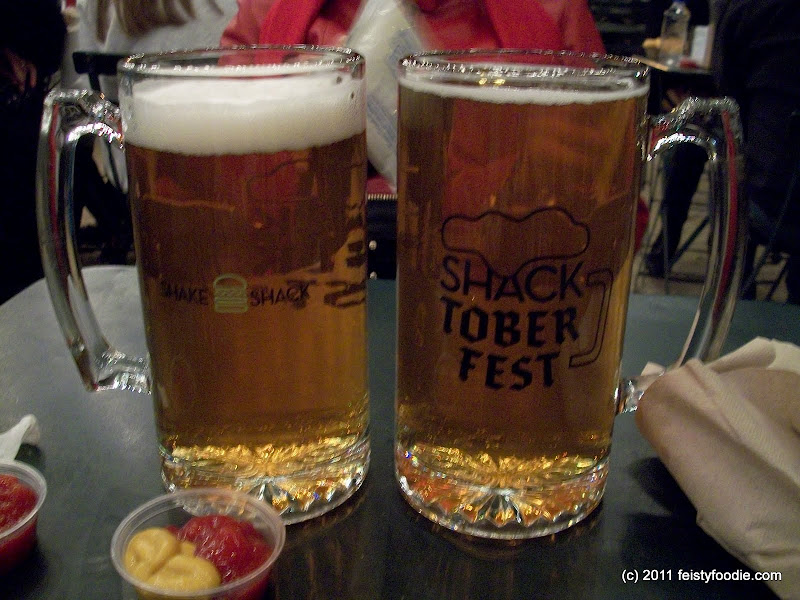 CT says: Umm… yup! Shackmeister sounds like what I saw on the tap. It was smooth and very drinkable for a non-beer drinker.

Each year they offer a couple special sausages, but this year they were also offering a BRAT BURGER! Yup, a burger topped with a split bratwurst and German-style slaw. For the sake of the blog and the detriment of my arteries, I ordered it. The burger had quite the sear on one side but was pretty bland compared to the brat and slaw. The brat had a nice, rich bite to it. The slaw was made with some whole grain mustard which was perfect in cutting some of the richness of the burger and sausage. I am glad I tried it, but wouldn’t see the need to order it again. 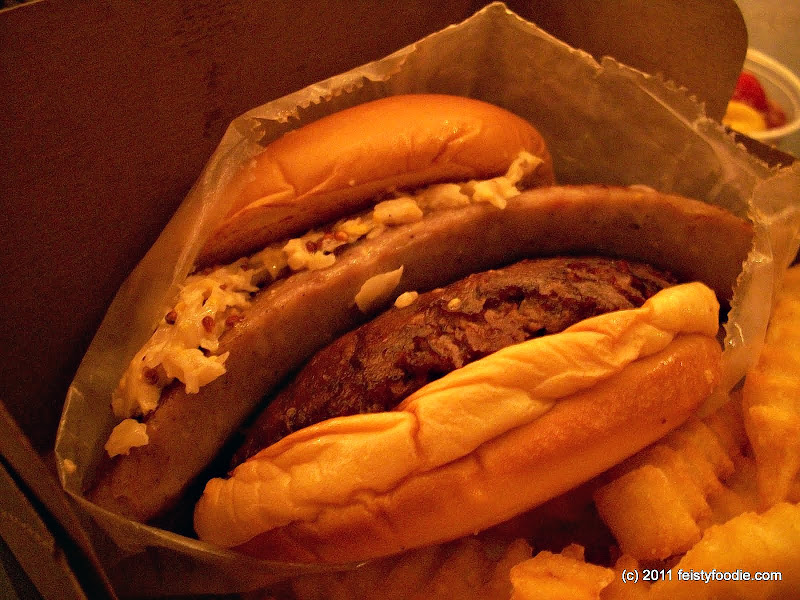 As you can see the burger was cooked all the way through, but was still a little juicy. 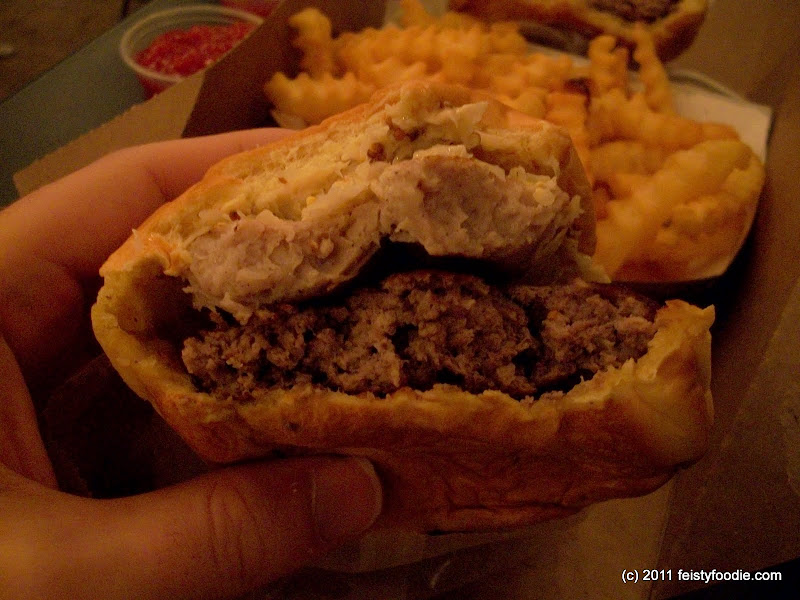 CT went with her standard order of a single Shackburger. It didn’t seem to disappoint. 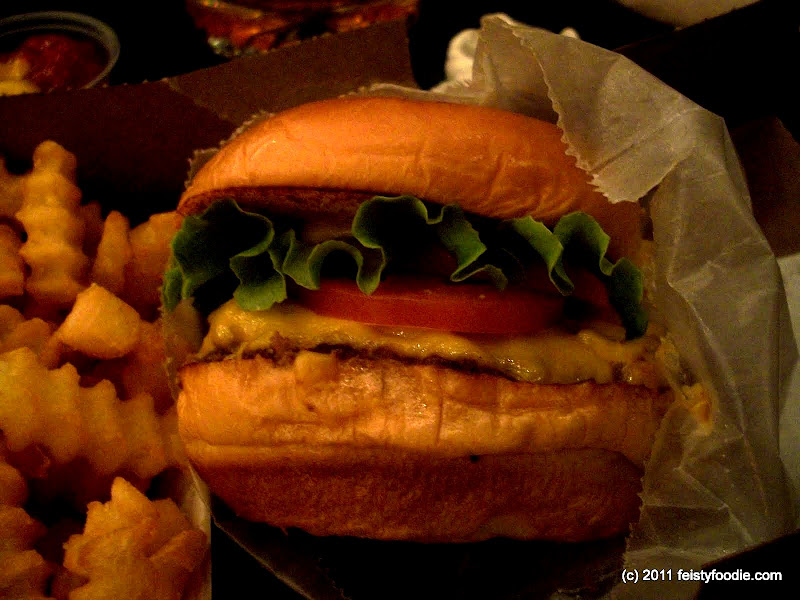 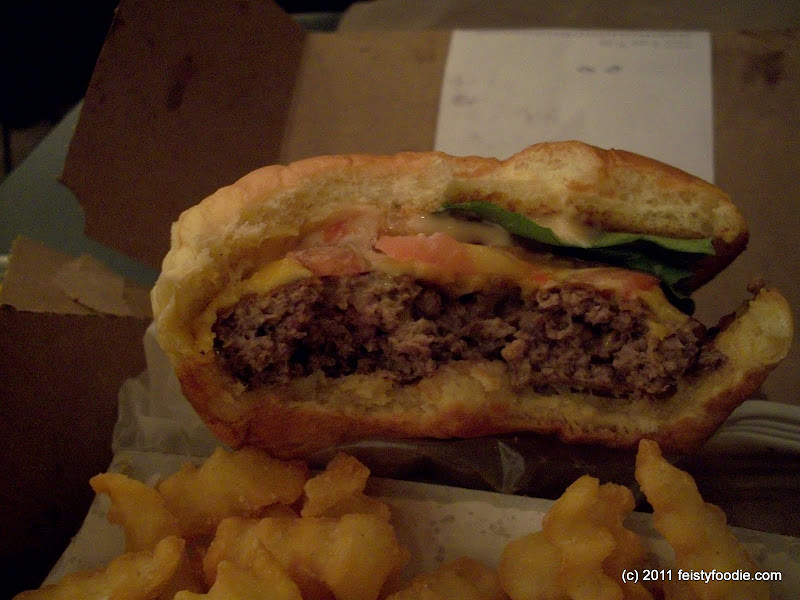 CT says: I just love the Shackburger. Why mess with perfection?! And I enjoyed this one as always. Just a perfect ratio of meat-toppings-bun. Yum!

We shared an order of fries. A lot of people I know hate Shack Shack’s fries, but I like them, a lot! Crinkle cut gives a very pleasing crunch. Who cares if they are frozen? 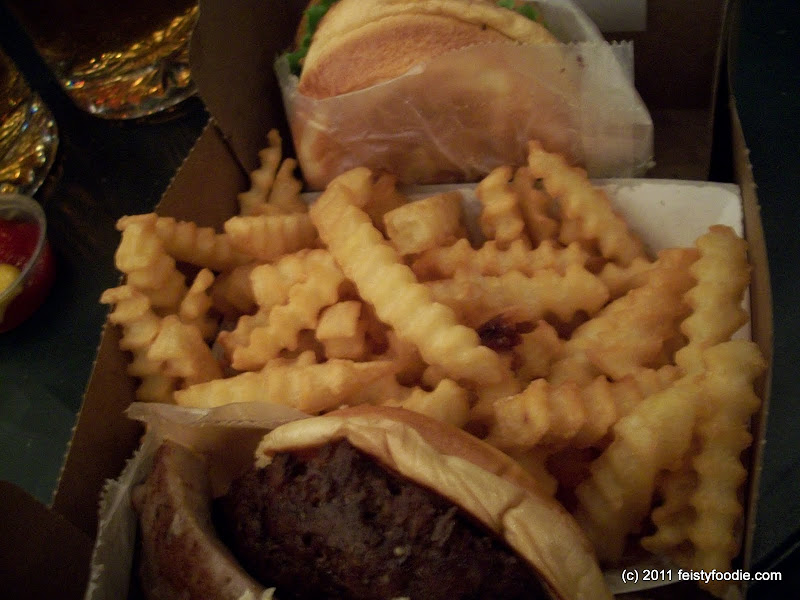 In a surprising turn of events, I decided we should get dessert. The custard of the day was Pumpkin Pie, so it was worth a try. It was very good. Not too sweet and not too overpowering with pumpkin pie spices. I really want to return on a Saturday to try their S’mores custard. 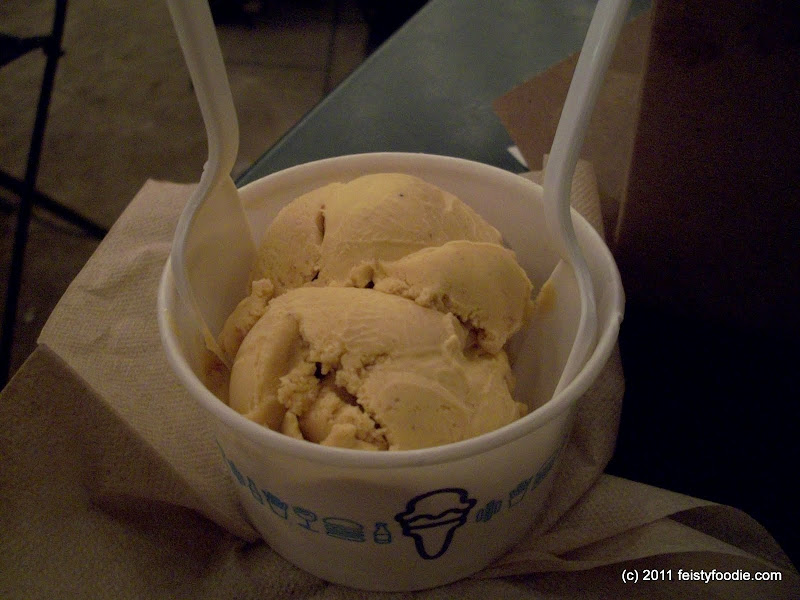 CT says: I guess I know where we’re going this Saturday! I really enjoyed the custard – a nice ending to the meal. Not too rich or heavy. Just spiced and refreshing.

All in all, Shacktoberfest was a nice change of pace from the always good Shake Shack. I’m not sure where we will put our two HUGE beer steins, but that is something I can worry about later. Shacktoberfest ends this Sunday the 16th so hurry on over to your nearest location. PROST!