Regular readers of the blog may know that I have a group of friends to whom I refer affectionately as “FBM” (first rule of FBM: never tell anyone what FBM stands for).  We like to eat, and we like each other, so whenever we get together, there’s sure to be food involved.  This time, KC went to Carmine’s a month or so ago and mentioned how great it was for big groups… so eventually, dinner was planned and there we found ourselves in the heart of tourist country.

I went to Carmine’s once probably 10 years ago – it was before I went to see Phantom of the Opera – and all I remember is the server being mean to us when we wanted to know why there was no alfredo on the menu, and everything being extraordinarily salty (I only notice food is salty much later, after I realize how much water I’ve drank throughout a meal).  But I was willing to go in with a mostly open mind… 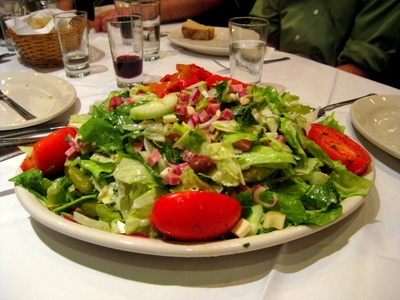 At KC’s suggestion, we started with the Carmine’s salad.  We’ve all been known to take turns mocking each other for salad offerings – “You don’t win friends with salad” as the saying goes – but she made it sound so good that we couldn’t say no.  And when it arrived, I was very glad we ordered this.  There was a lot going on – basically a chopped up antipasto platter, with bits of meats, cheeses, olives, tomato, and plain iceberg lettuce, dressed lightly.  I would have finished the whole platter if they’d let me!  This is how salad should be 😉  Although I’d rather have Romaine lettuce but heck whatever, it tasted really good. 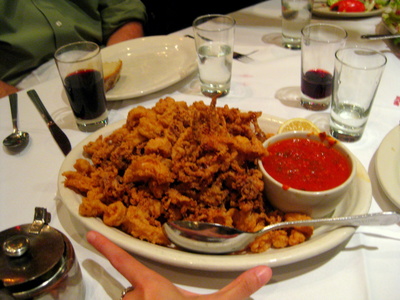 Trying to show scale as to how big the appetizers were, I put my hand in the photo.  Fried calamari was up next; I thought this was OK.  Not bad by any means, but very standard, nothing above average.  Good to munch on, but not a must-order. 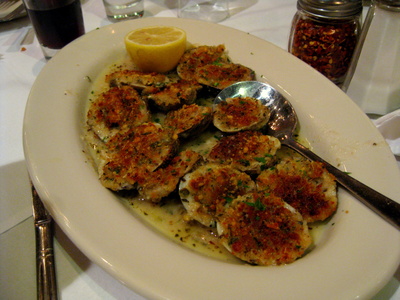 Baked clams made their appearance next; I only had one and it was fine, again, nothing special.  My baked clams are better.  Hahaha, maybe because a piece of bacon graces the top of each baked clam I make, but regardless, these were just okay. 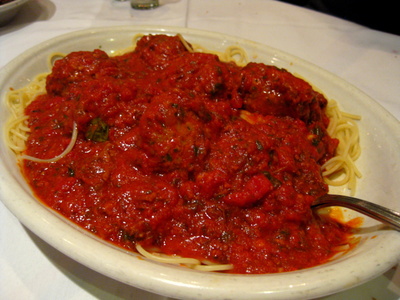 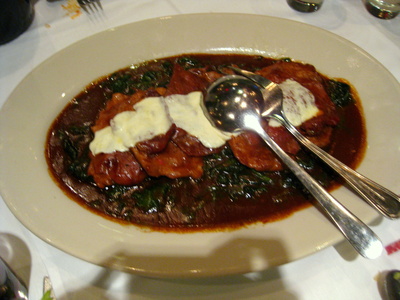 Veal saltimbocca – this was not good.  The veal was thin, super tough, and did not taste like veal at all.  I would definitely not order this again. 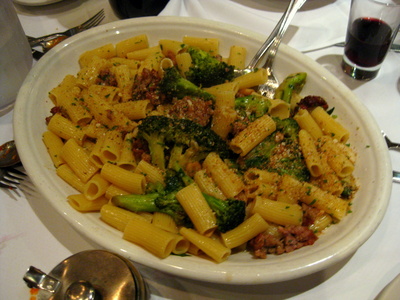 Rigatoni with broccoli and sausage. 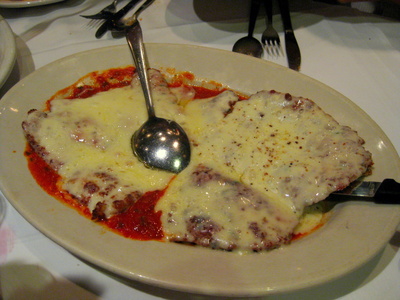 My plate with a little bit of everything on it.  The chicken was pretty good for parmagiana, but I rarely ever order that so I have no point of comparison.  The pastas were properly cooked, which surprised and impressed me (I’m pretty sure they don’t make the pasta from scratch here)… the red sauce was fairly standard, nothing mind boggling, while the broccoli/sausage combo was just OK, but that’s not a pasta dish I prefer in general.  I was pretty stuffed from all the food on the table, though, and while we made a valiant effort in finishing things, there were a few things with a few bites left on the table.  The food was good… but not amazing. 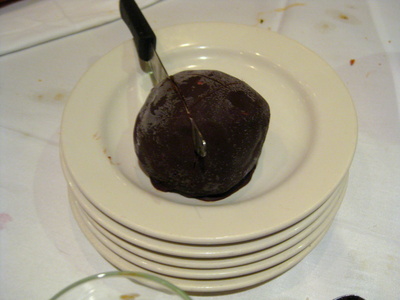 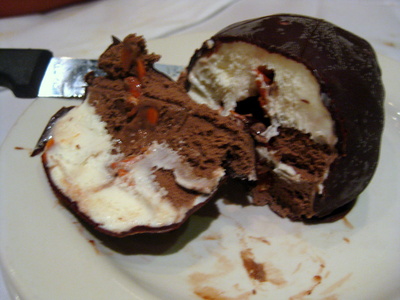 He kindly cut it open for me to photograph the center, and then gave me some to try.  I even got to eat the cherry inside!  What surprised me was the cherry tasted like it’d been soaked in almond extract or liqueur.  Yum!

Yvo says: This is definitely the place to feed a big group of people (who have mostly the same tastes in food, or who can come to an agreement on what to order) quickly!  The price for everything above, with two bottles of house wine (which Beer Boor mentioned was the double-size?), split among 9 people came to about $40 a person.  Not too bad!  I don’t know that I’ll be in a rush to go back, but I can comfortably suggest it for a large group pre-theater dinner in the future.
recommended for big groups