I took FeistySis to another press event, and afterwards we were hungry.  Luckily, I’d scouted the area nearby and discovered we’d be right next to Ed’s Chowder House, so we went there – it was pretty empty at 6 pm on a Monday, but that was to be expected. 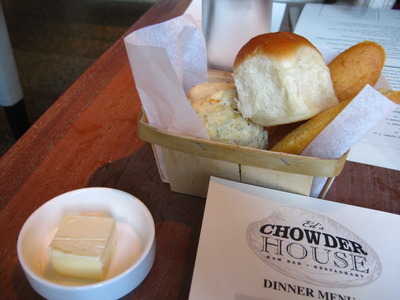 While we browsed the menu, we made our way through the bread basket.  There was a jalapeno cheddar biscuit in there that was outta this world – you could see flecks of the fresh jalapeno in it, which gave it a nice bite.  Yum! 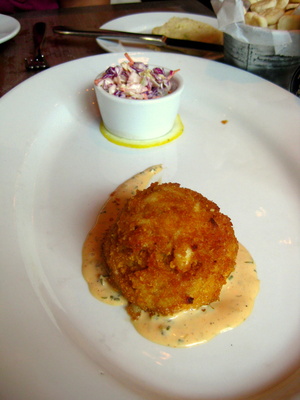 We decided to order a bunch of appetizers and then split a main course.  The first appetizer to arrive was the crabcake; I liked this.  Very little breading, but what there was, was super crunchy.  The meat inside was all lump meat, and flavorful… the bottom sauce was also very good.  I thought the cole slaw was a little bland though. 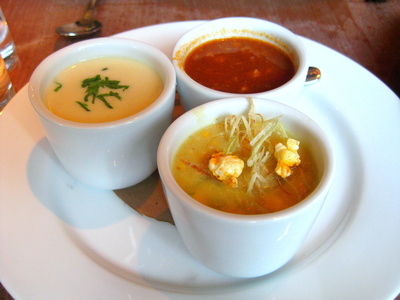 We also chose the chowder sampler, since Hungry had mentioned to me how good it was.  FeistySis insisted she would not enjoy popcorn in her soup, and refused to try the popcorn with soup, so whatever… I ate both pieces.  In any case, I started with the corn chowder, which was pretty good, but not amazing.  Then I moved onto the clam chowder which was holy-crap-this-is-fantastic.  If I ever go again, I just want to order that.  It had this savory quality to it that my chowder doesn’t; just this … inexplicable taste to it.  I joked that they must’ve put nutmeg in it, but FeistySis didn’t get the joke (Rachael Ray puts nutmeg in a lot of dishes and then says, “It’s just that little something that will make it taste so good and have people going, ‘hmm, what IS that?'”).  The Manhattan crab chowder was only OK though… but then I don’t believe chowders are ever red.  (Note: I just went to double check the names of the chowders, and the corn chowder is no longer on the menu – which is expected, as it is no longer corn season, and has been replaced with a squash soup.)

Of interest: FeistySis tried to tell me how to eat the chowders.  If she reads this, she’s probably rolling her eyes and getting exasperated at me, but honestly, I know how to eat soup!  You eat it the way you want to, and I’ll eat mine the way I want!  So bossy. 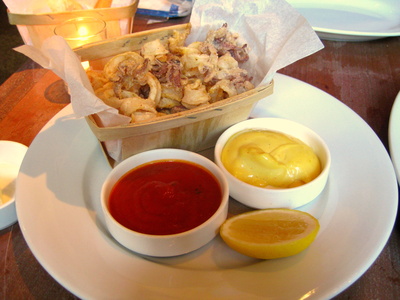 Fried calamari was next on the list; a slightly spicy, slightly sweet marinara dipping, and saffron aioli, which I really enjoyed.  The calamari itself was crisp, lots of tentacles (which some people prefer), and cooked just right and not rubbery at all.  Yum. 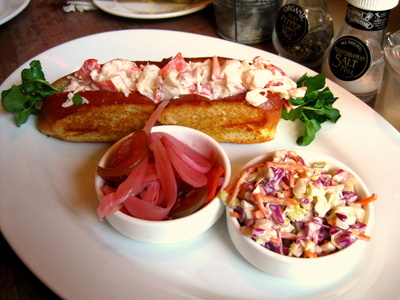 Our main course was the lobster roll.  On the side, various spicy pickled veggies and more cole slaw, though this batch seemed to be seasoned slightly more than the previous one, so I happily ate this one. 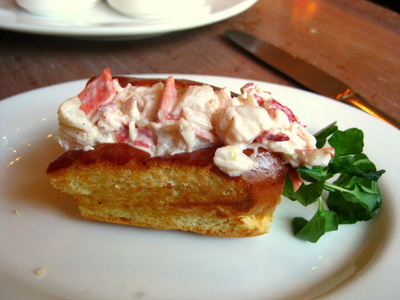 As for the lobster roll… well… 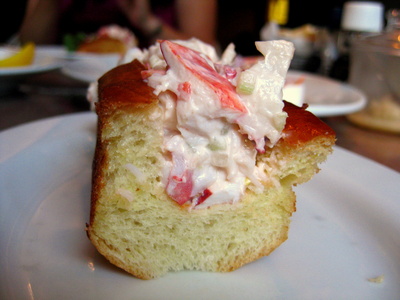 It was a decent length, but the meat inside was overwhelmed by mayo.  Strangely, the meat was chopped up smaller than I’d expect; I would have preferred just chunks of lobster meat, not broken down any further than how it comes out of the lobster.  Oh well.  At $27, this was really not worth it. 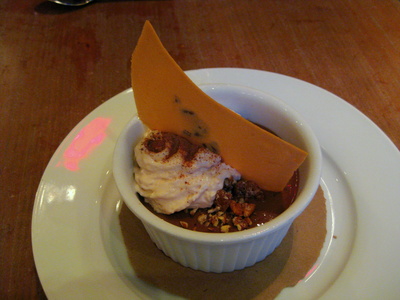 Then, because we’re gluttons, and maybe because FeistySis was enjoying eating in a restaurant without any children to feed or worry about, we decided to linger a bit longer and order dessert.  Chocolate pudding with bourbon walnuts or pecans… I forget. 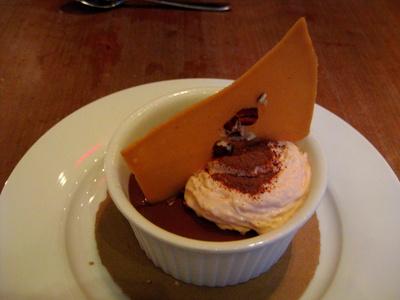 FeistySis insisted I take a photo from both sides.  In any case, probably because I’m illiterate, I read ‘pudding’ and thought ‘mousse’.  This was definitely pudding – completely soft, not a hint of stiffness.  I… am not a huge fan of pudding, so this was very… OK for me.  I mean, it didn’t taste bad, but I’m not a fan of the texture of pudding so no amount of chocolate flavor – which was very prevalent – could have saved this for my personal tastes.  I imagine it was pretty good pudding, as FeistySis ate it happily and didn’t say anything negative about it.  Then we rolled out of the place, clutching our Elmo goodie bags and headed towards the train station.  I made her walk from the Lincoln Center area to 5th Avenue and 57th… haha.

Yvo says: Much of what we ate was very good, though the only standout was the clam chowder.  I would really like to know what’s in the chowder that makes it so effing good – if someone who is in a position to share reads this, please do!  I promise I won’t post it on the blog if you don’t want me to!  So while the calamari was good, and FeistySis LOVED the pickled veggies with the lobster roll, and the crab cake was good… mostly it was just good.  Not the kind of place you might want to go out of your way to visit.
good, but not destination dining