After checking out the Amador Causeway, we headed back to our hotel in downtown Panama City. Before spending the rest of the afternoon by the pool, we needed to get something to eat. We walked around the vicinity of our hotel and came down to two options; an artisanal burger place or a homey Mexican place. After a little debate, some home cooked Mexican food sounded a lot better so we sat down at La Mexicanita No. 2.

They seemed to do a pretty good lunch business with the office workers nearby and we glanced at other tables to see what the popular dishes were.

It seemed that queso fundido was a must order appetizer. We ordered it with chorizo on top. It was quite a large dish full of cheese and meat. It was amazing. It was enough for four people to share. I was almost brought to tears when I left it unfinished because we had so much more food on the way. 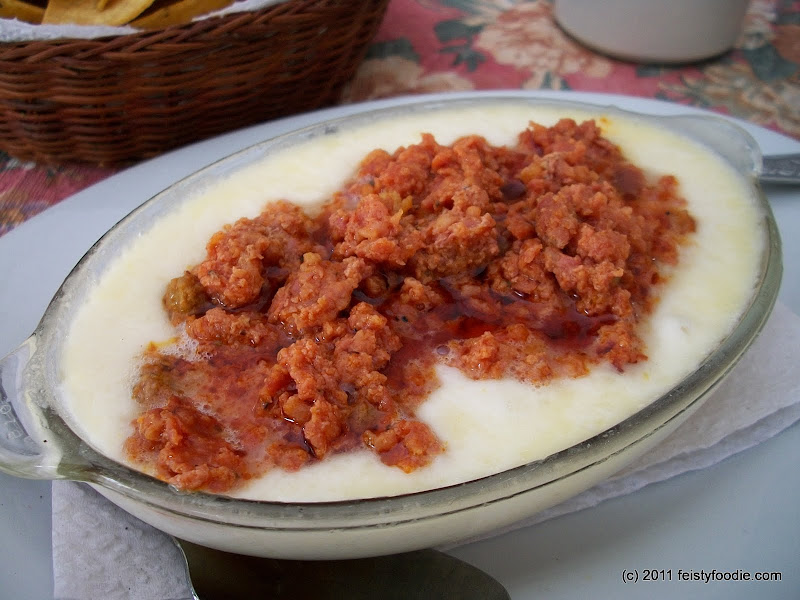 As you can see, it was super gooey! 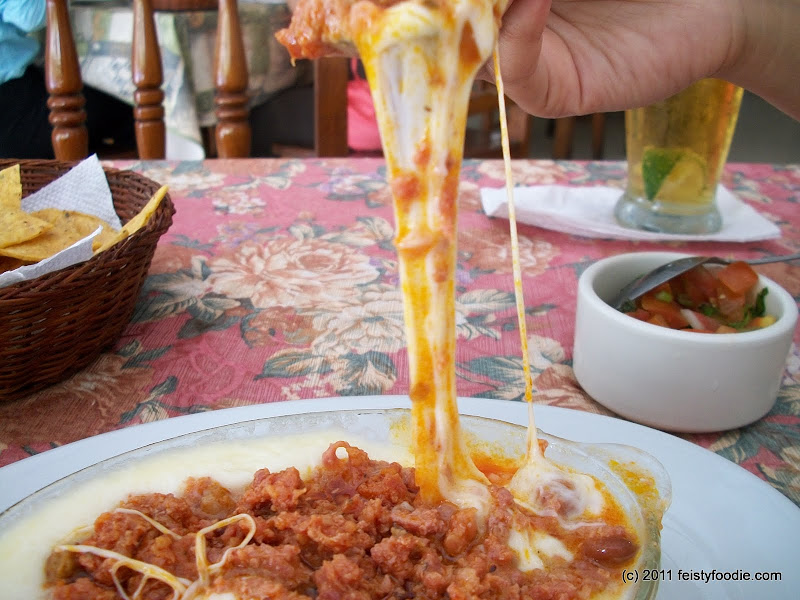 It was served with some thick corn tortilla chips that held up to the weight of the gooey cheese and spicy meat. 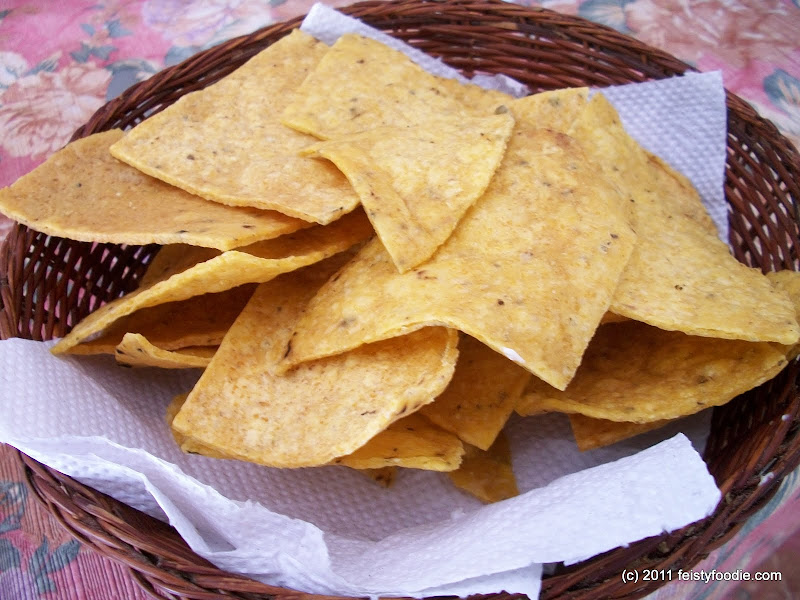 CT says: This was awesome! The chorizo was a little spicy and when mixed with the cheese that was oozing over the bowl and topped on a freshly fried chip – heavenly!

We were also given a small cup of hot sauce and some pico de gallo. I think the waitress thought that as Americans we would be afraid of the hot sauce so she gave us only a little. Boy was it spicy! We promptly asked for another cup of it. 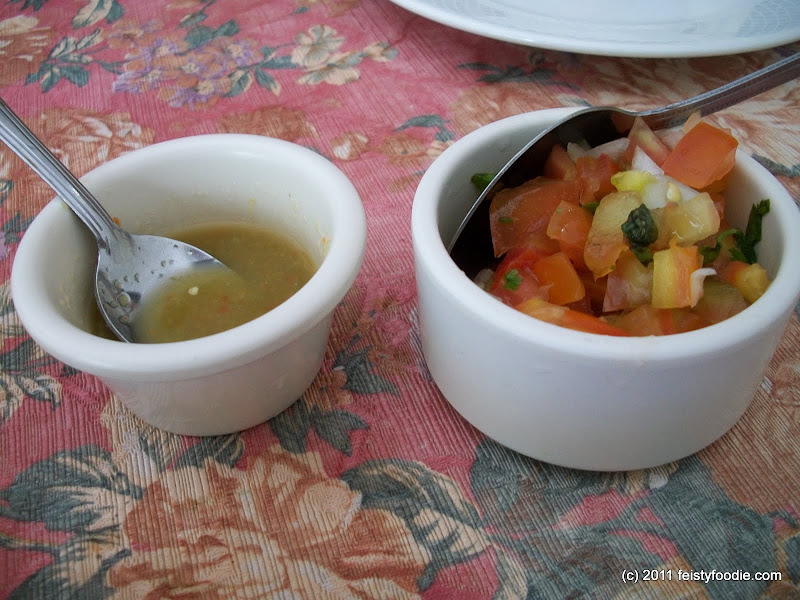 CT says: I love that we got individual cups so we could make it as spicy, or not, as we each wanted.

CT ordered the tacos fritos for her main. It had chicken, beef, and chorizo. They were packed full of meat.

CT says: These were tacos unlike any I’ve ever had and OMG so freakin’ good! I’ve had great tacos in NYC, Cascabel and Pampano taqueria being my favorites, but they have nothing on these fried pieces of perfection. It seems they start with a soft corn tortilla, stuff is full of flavor-packed meats. and deep fried the whole thing until crispy. I mean, WOW! The tortilla was crunchy and only mildly greasy, as would be expected. All three meats were juicy and super flavorful, yet each once different. From the side views they looked dried out from the frying, but inside they were moist and just droolworthy. I couldn’t pick a favorite. In fact, I couldn’t even pick a least favorite! They were all so good! I’m jealous of myself just recounting this meal, I really want it again. 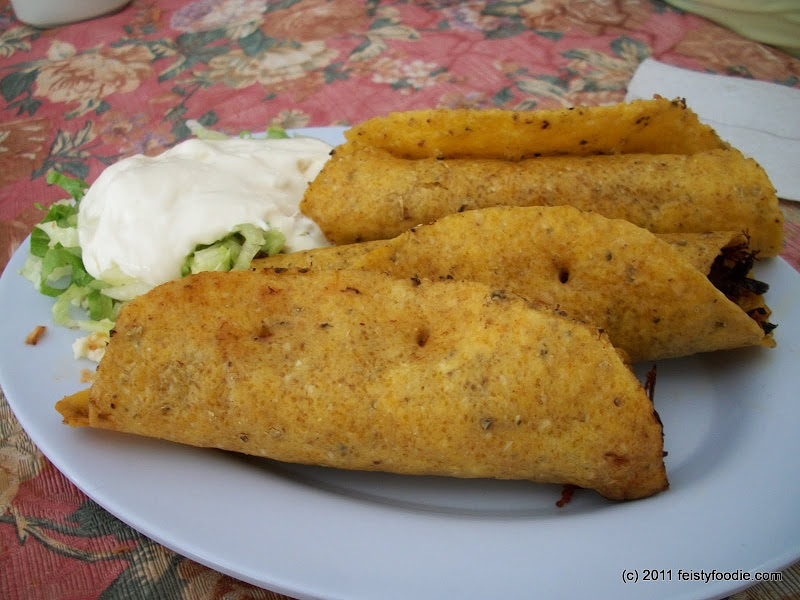 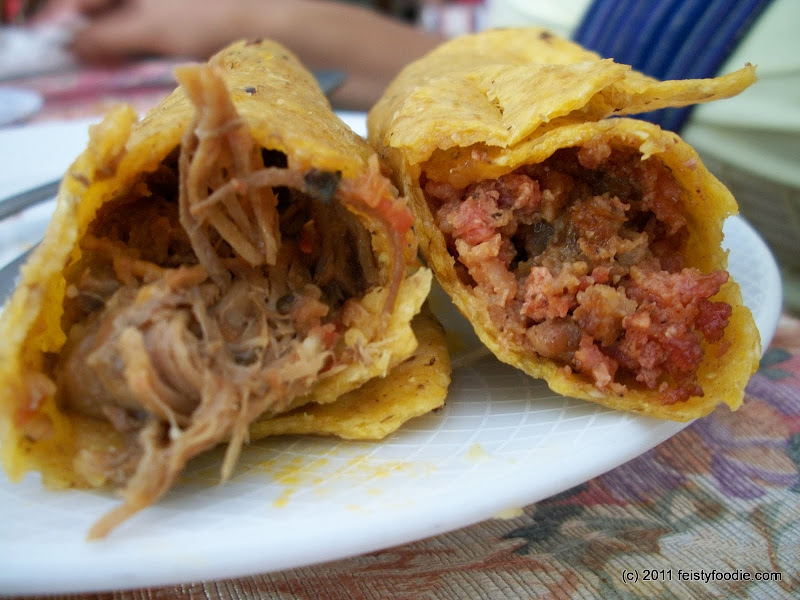 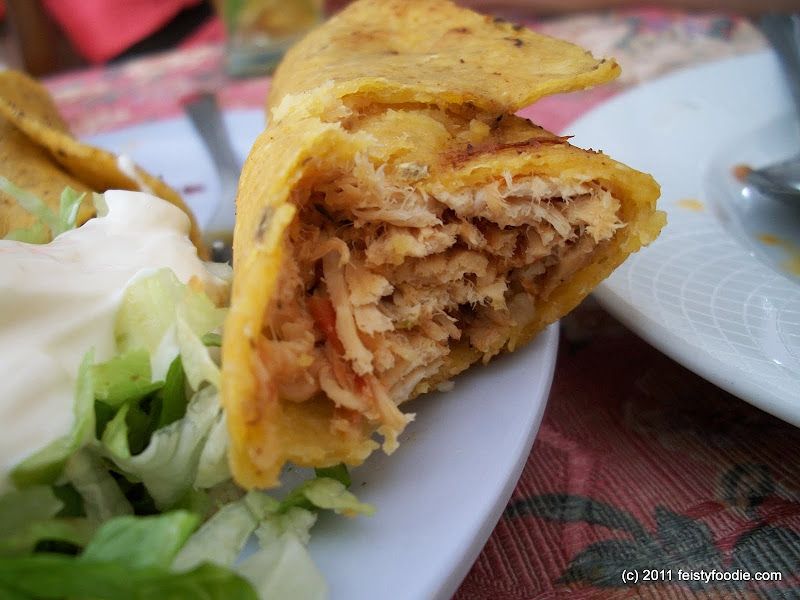 I saw the ladies next to us with an order of carnitas, so I copied them. You could order it by the person, so the more people you have the more carnitas you get. It was only me, but I still got three big chunks of pork in the order for one. It came with beans and fresh corn tortillas. 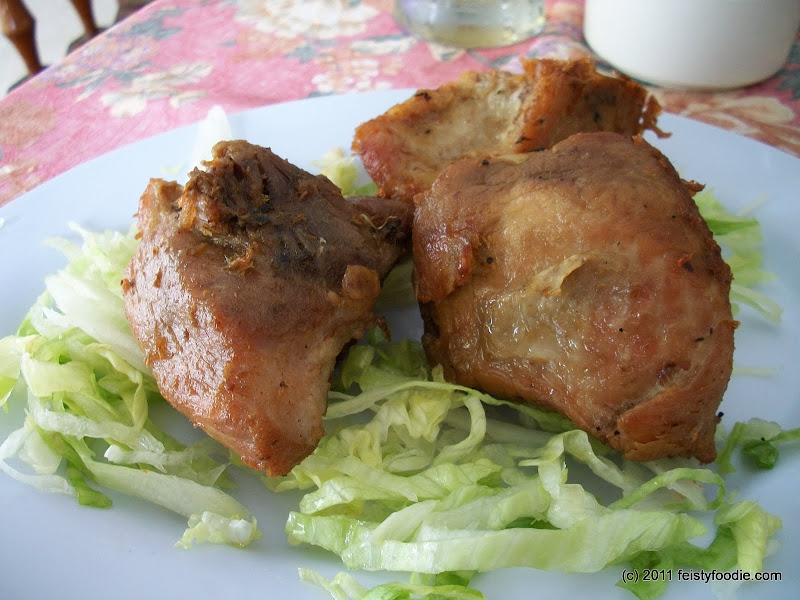 I forgot that carnitas on its own is a little dry, but with the beans and pico de gallo, it was excellent.

The beans were cooked perfectly and not too salty as they sometimes can be. The cheese on top got nice and melted too. 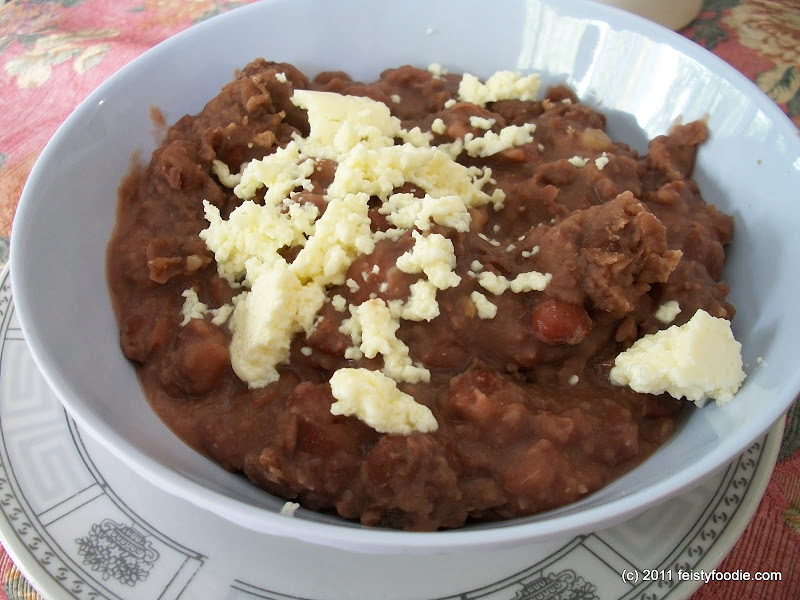 I don’t think I ever had corn tortillas so fresh before. They held up against the weight of the meat and beans. I didn’t have to worry about them falling apart as I ate. 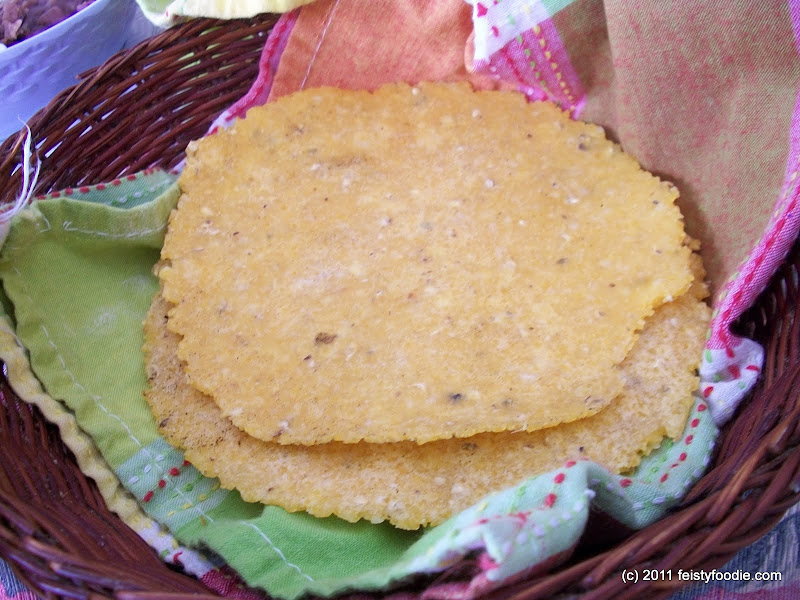 Here is my masterpiece. 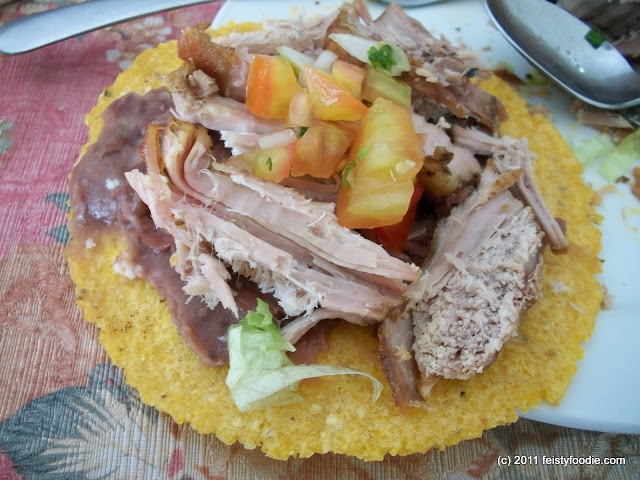 Since the menu had so much good food on it, I just had to order something else for us to share. We got a gordita. It was huge. Beef and beans with lettuce over a huge crunchy corn disk. Not knowing what the portion size of all the food would be, we ended up leaving probably half of this on the table. It was sad to waste such amazing food. 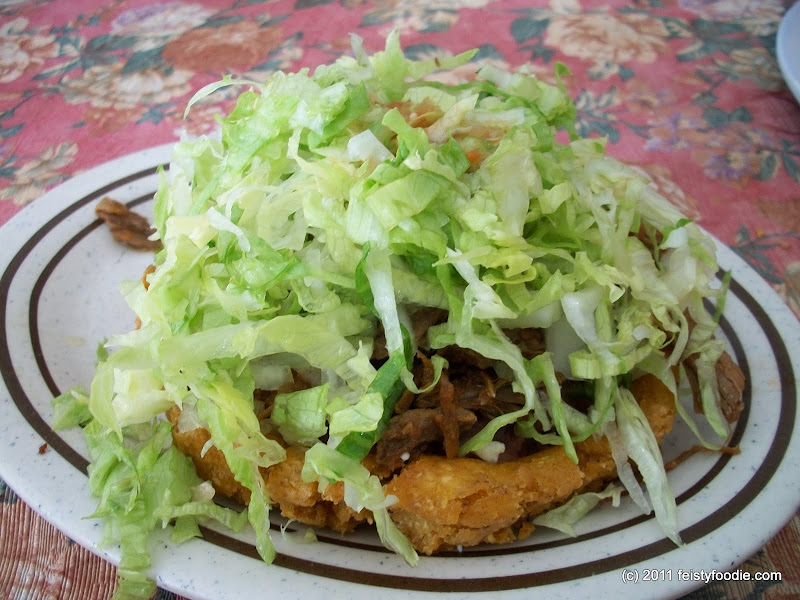 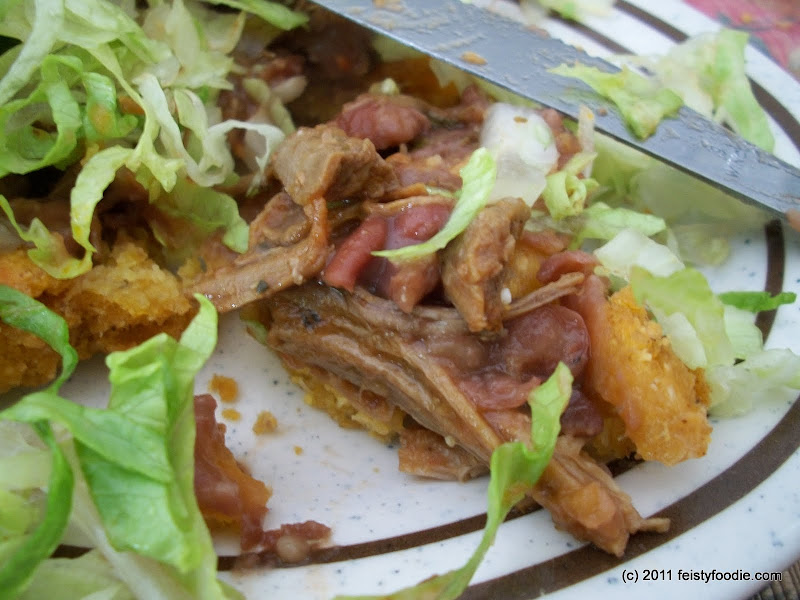 CT says: This gordita was the equivalent of a “tostada” in most Mexican restaurants I go to. It was really good, piled high with similar goodies to those we’d already tried. The beans were really tasty too. I wish I had been capable of eating more food, but I stuffed myself beyond full and then stuff myself some more. Not my usual behavior right before going poolside, but this was too good to pass up and who knows when or if I’ll ever get Mexican food like this again.

All in all, La Mexicanita No. 2 was some of the best Mexican food I have ever had in my entire life. Not only was everything delicious, it was super cheap. The whole meal including two Coronas, tax, and tip was less than $40. It was quite a nice find considering it was located in an unassuming strip mall across from our hotel. I think we were almost as full from this meal as we were from Manolo Carocol. The diet starts when we get back to NYC!