After our ziplining adventure, we relaxed in our hotel back in Panama City before going out again for dinner. With no real plans, I decided we should take another shot at trying Manolo Caracol since they were closed for lunch. My mother found a great article in the NY Times about visiting Panama City and Manolo sounded too good to not try before we left Panama.

After we arrived, the host/waiter promptly greeted us at the door. He explained to us about the restaurant in that it is a 10 course tasting for $30 with no menu. Apparently this scares off a lot of people as we heard him explain this to others during the rest of the night. Since we read about the place before hand, he didn’t need to sell us on anything. We were in for the long haul!

The restaurants focuses on local, organic foods cooked simply to let the ingredients shine. The restaurant was very casual and had a rustic design. Completely different from Jean Georges.

The kitchen was somewhat open so you could see what the Chef was doing. He was blocked a bit by the large bins of fresh pineapple and citrus. 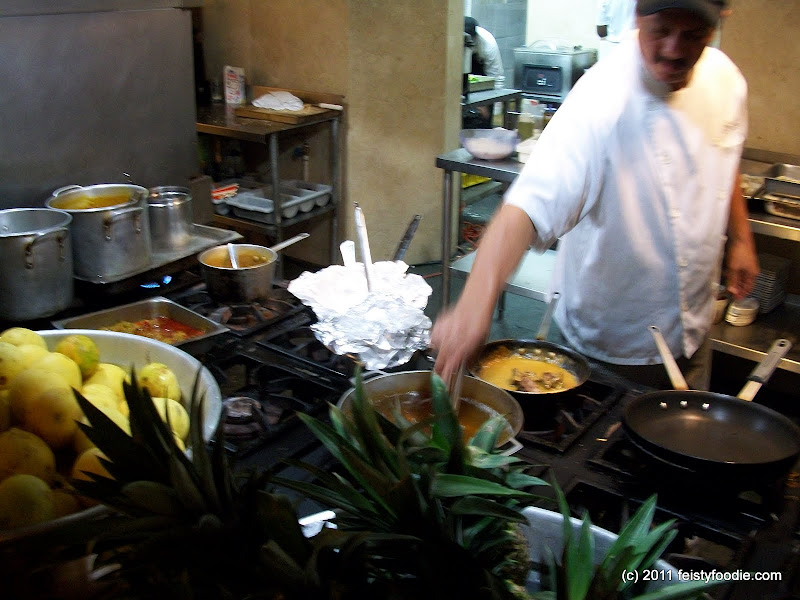 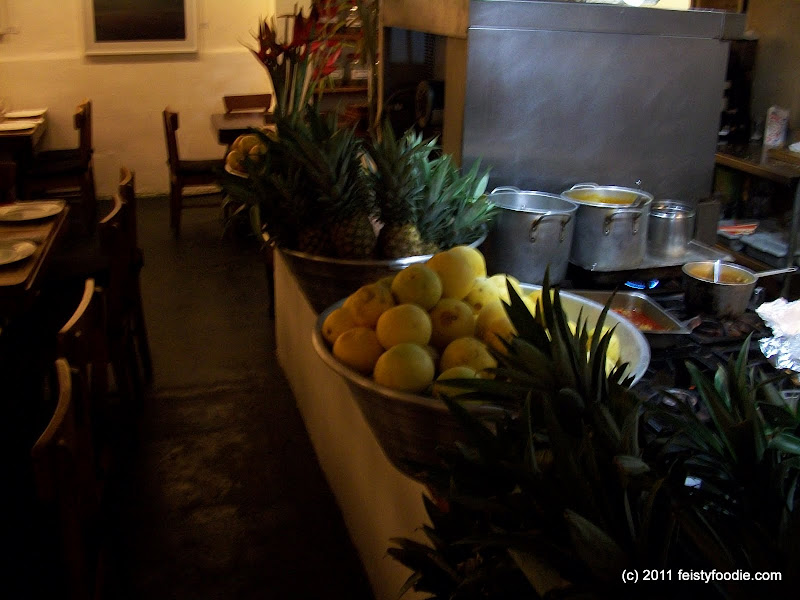 They also had quite a large wine list focusing mainly on Spanish wines in the $30 range. I was going to splurge and get the bottle of Barefoot wine for $50, but then I came to my senses and realized it costs a tenth of that back in NYC. 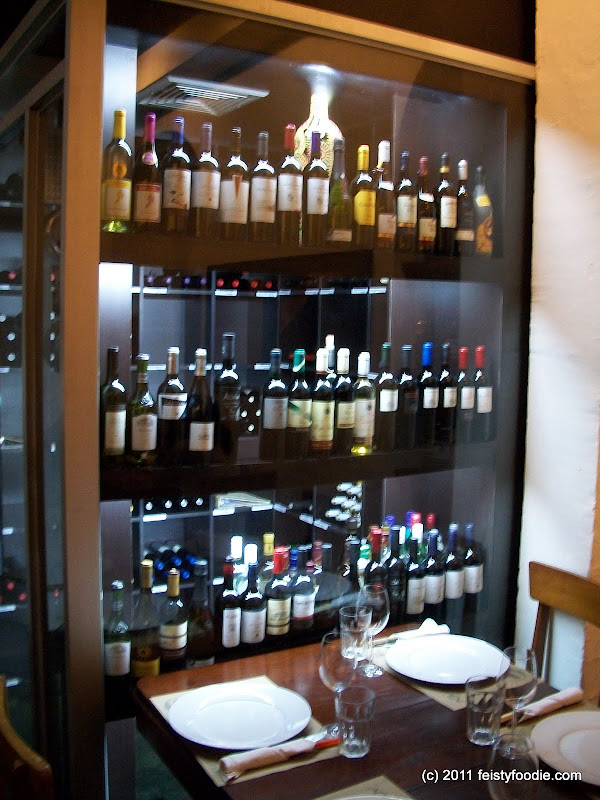 Right by the entrance was a HUGE bin of corks. While we gawking it, one of the managers/owners remarked that it took 10 years to fill. Now that’s a lot of wine! 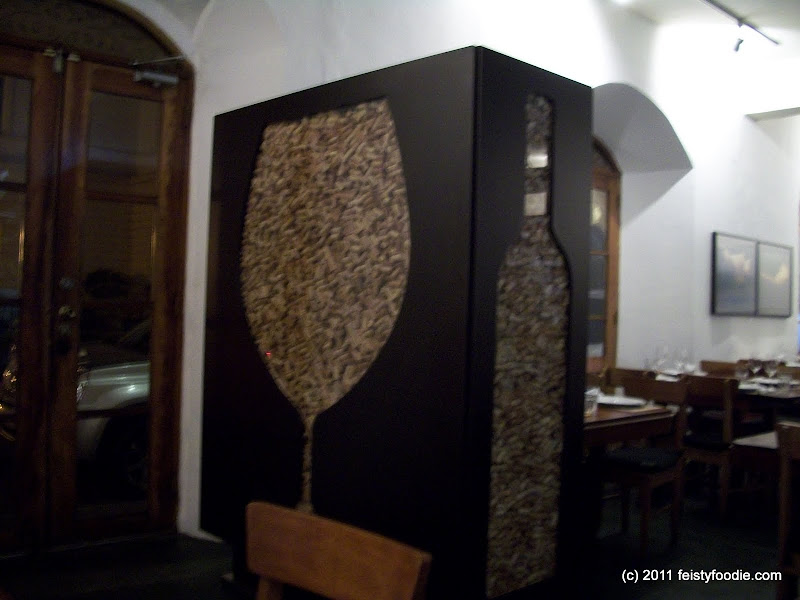 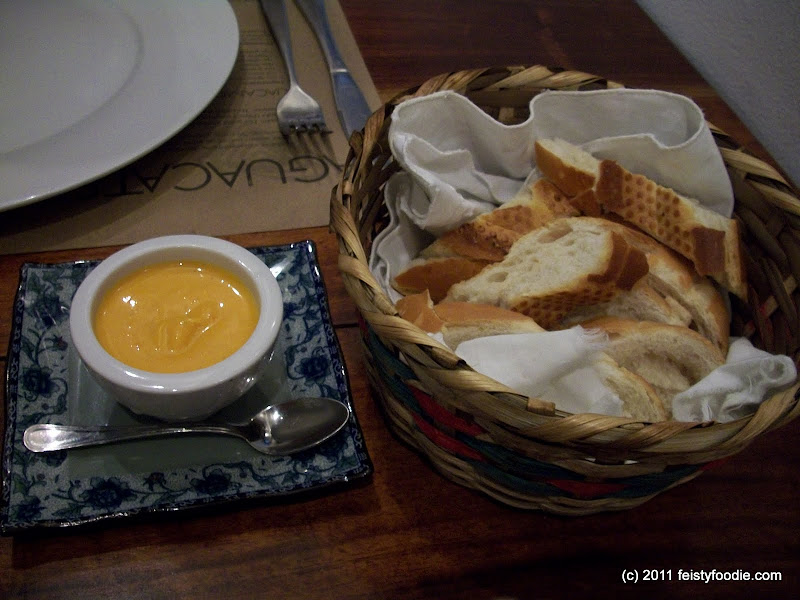 All of the food was served on one dish with a few courses served as individual portions. While it was more eco-friendly for us to use the same plate for each course, the plate got pretty dirty pretty quickly. This would not fly in NYC.

1st course: Shrimp ceviche. Panamanians love their ceviche and so do I. This was the most refined ceviche of the trip. It also had some sliced palm fruit and maybe some of the same type of pumpkin that we had at René Cafe. 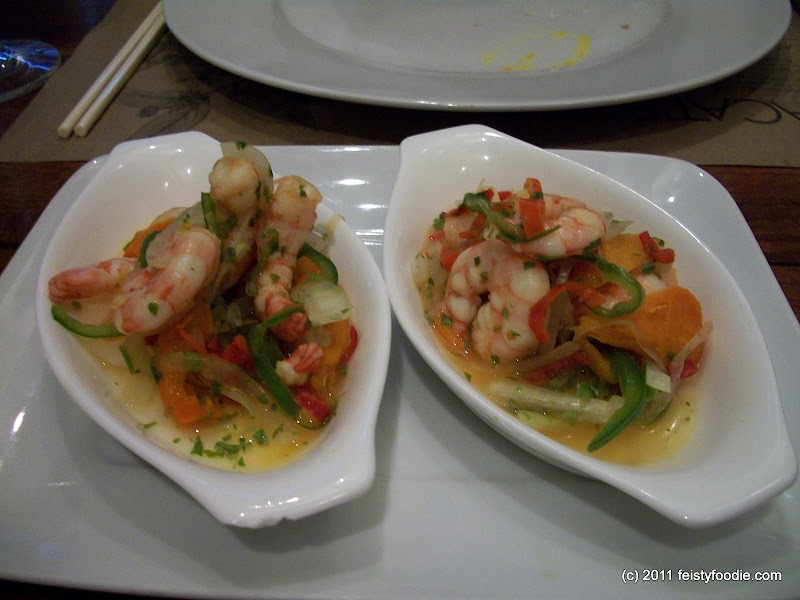 Look at those shrimp!! 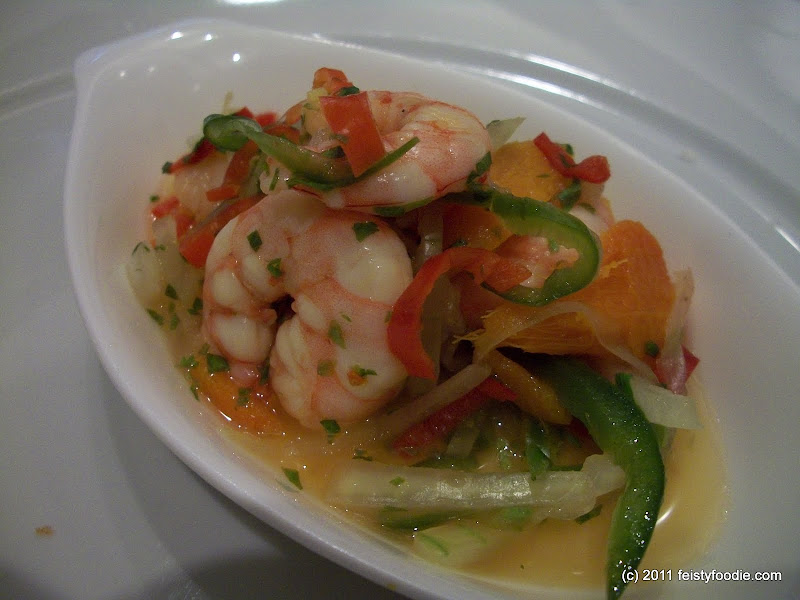 CT says: Another fantastic ceviche… maybe even my favorite of the trip! The perfect balance of shrimp-onion-juice.

2nd course: organic salad with lulo vinaigrette. It was pretty funny when the waiter explained to us that the dressing was made with lulo. Although his English was better than most, he didn’t know the English word for lulo. With help from another table who spoke Spanish better than us, we found out it was similar to a kumquat. The dressing was pretty sweet, but nice and simply tossed with the organic greens. 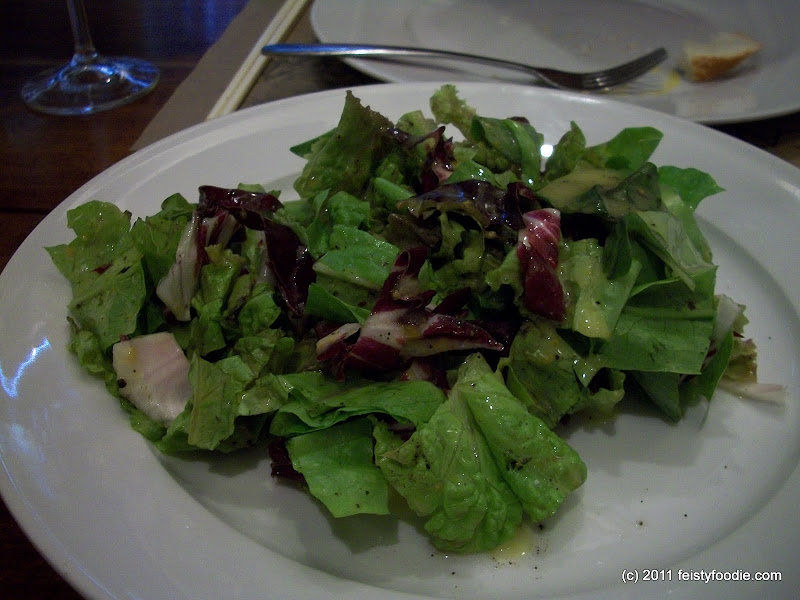 CT says: You may be thinking…salad? Really? It was actually really tasty with the lulo dressing and definitely helped with the digestion of the next 8 courses.

3rd course: goat cheese empanada with sweet jalapeno sauce. This was quite an interesting empanada wrapped in puff pastry and filled with tangy, creamy goat cheese. The jalapeno sauce wasn’t spicy at all. It just brought a nice sweet contrast to the cheese. 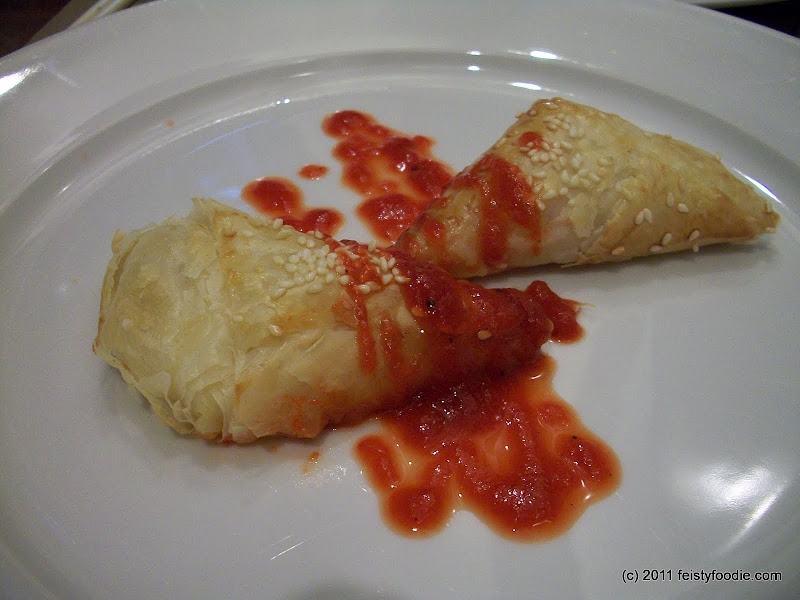 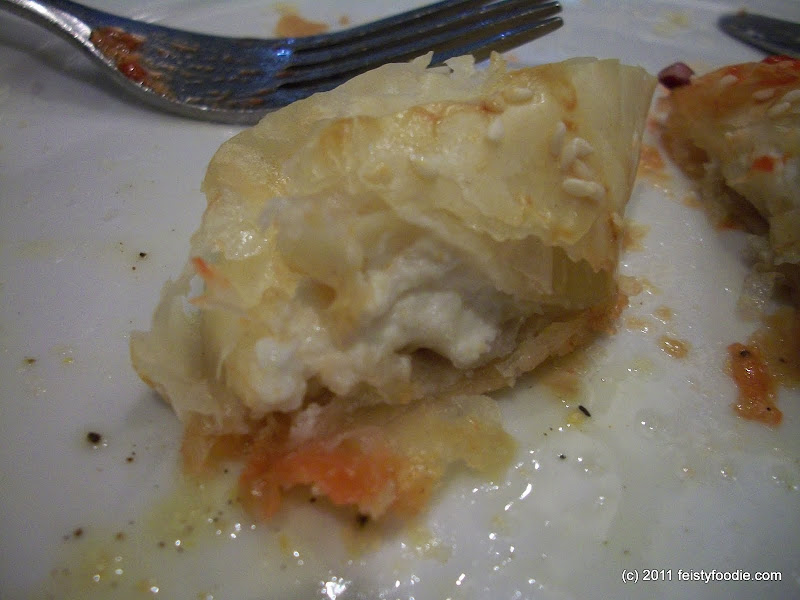 CT says: Goat cheese and jalapenos? Yes please! I’m still trying to figure out what the sweet-jalapenos sauce reminded me of… but whatever, it was delicious. Not too much cheese that I felt weighted down.

4th course: chicken taco. We didn’t understand what the sauce was, but it was delicious and complex. The chicken was cooked perfectly so it wasn’t dried out. I made sure to get as much sauce on my taco as possible. 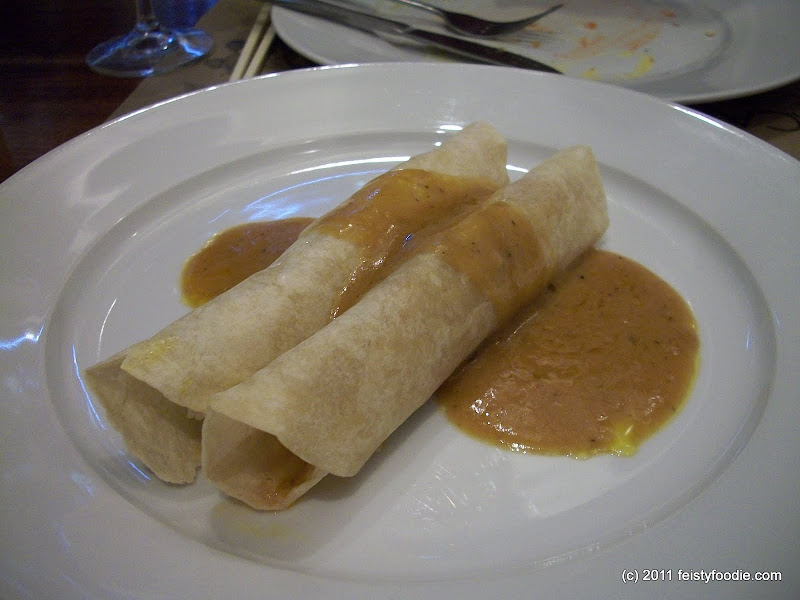 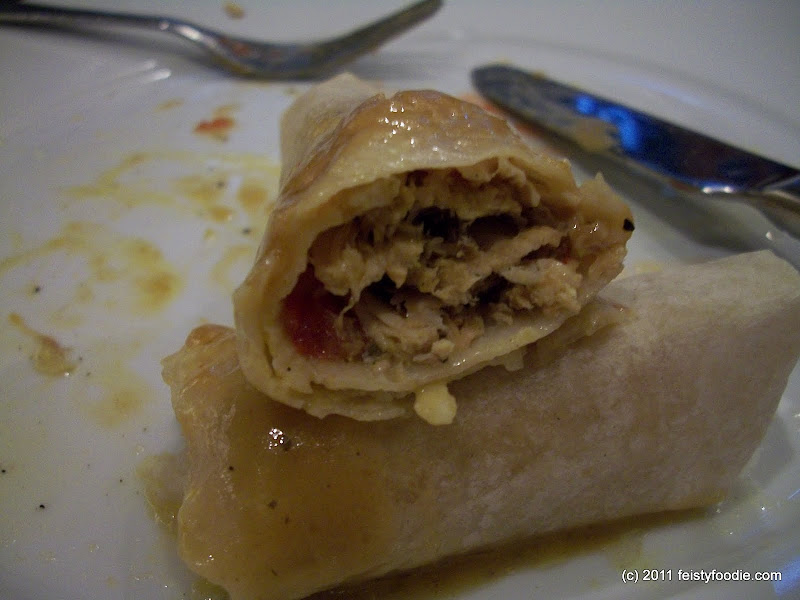 CT says: I like tacos and despite being chicken inside, this one did not disappoint. However, I had to fight TT for some more of that sauce!

5th course: lagostino & mariscos sopa. This was our first sopa of the trip. I usually don’t like to eat hot soup while the weather is also hot. This was pretty great. It had a ton of spice, which may have caused a tear or two. The seafood was nice and tender. Too bad it was only a small teacups worth, but then again the meal wasn’t even half over at that point. 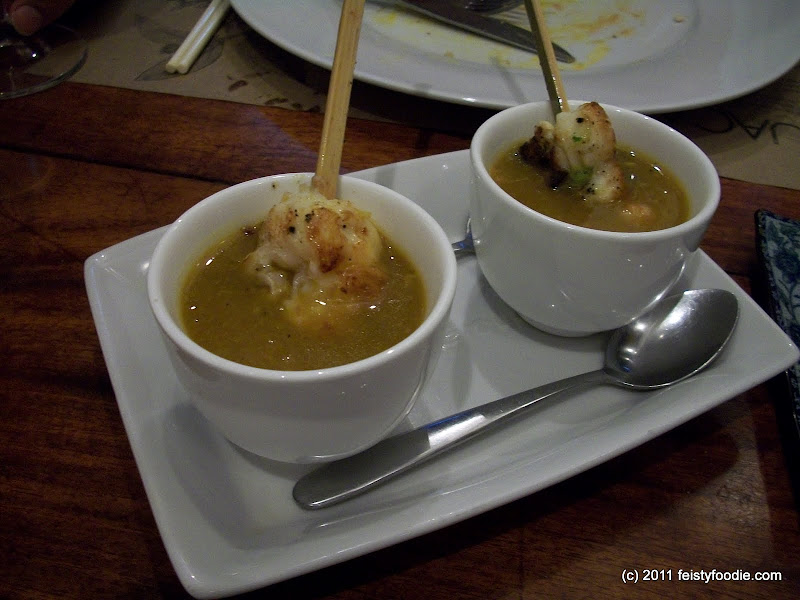 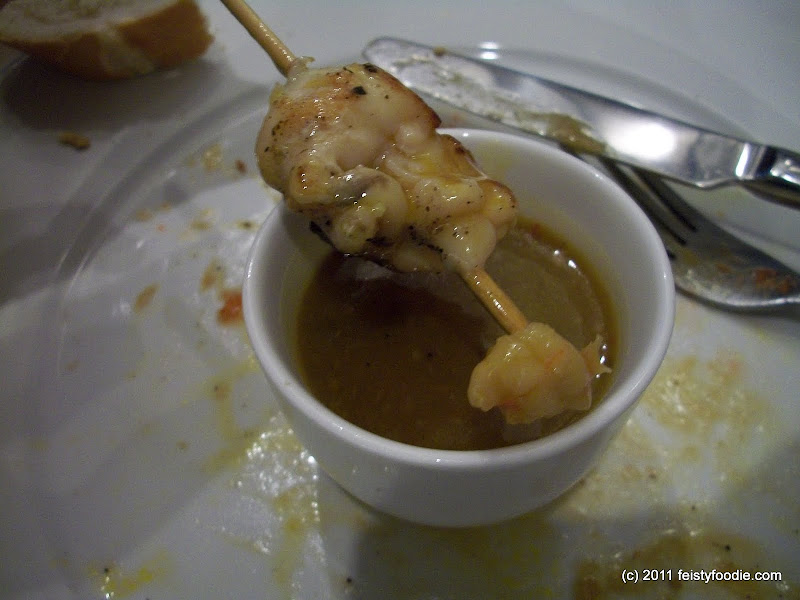 CT says: There was quite a bit of seafood stuffed into that little cup. I thought it was nicely spiced, but TT must have had a hidden pepper in his.

6th course: beef in a tomato sauce. I believe this was short rib, which was a little tough. The sauce was very fresh and bright. I think I used some of the bread to sop up the extra sauce. 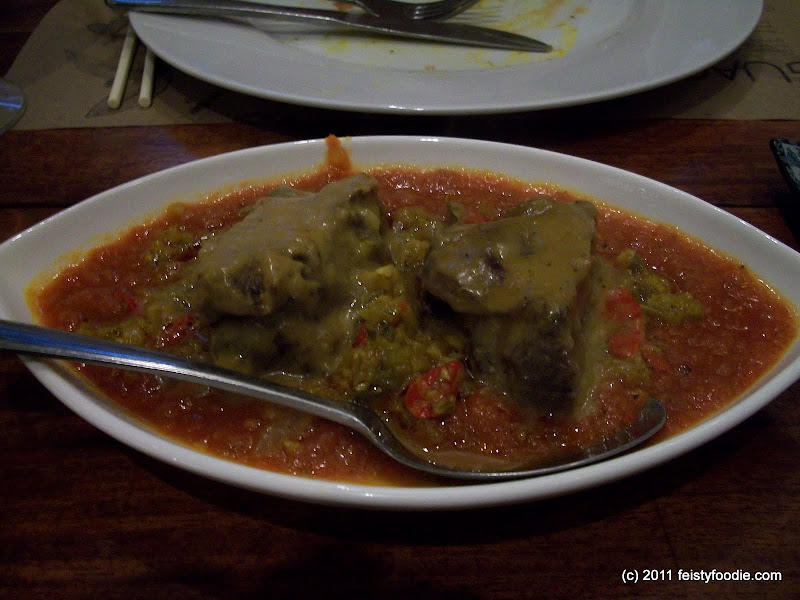 CT says: I was surprised that this wasn’t my favorite dish… I mean, short ribs?! But the meat was just ok, not the best quality. The sauce was nice but nothing mind-blowing. And the portion was pretty large for 2 people, 6 courses in, so I just at a few bites. I was also getting really full at this point and the food just kept coming! I assumed being a heavier dish it might’ve been the last… until our server informed us we had 3 more courses coming! ( This was the first time we were given any indication of how much food was going to be served, so rationing myself was a little difficult at this point).

7th course: scallop risotto. Although the beef took up a large chunk of stomach room, I powered through. The portion of risotto for the two of us was HUGE. We would have been more than happy with half that amount. There were nice chewy chunks of scallop mixed throughout this perfectly cooked risotto. 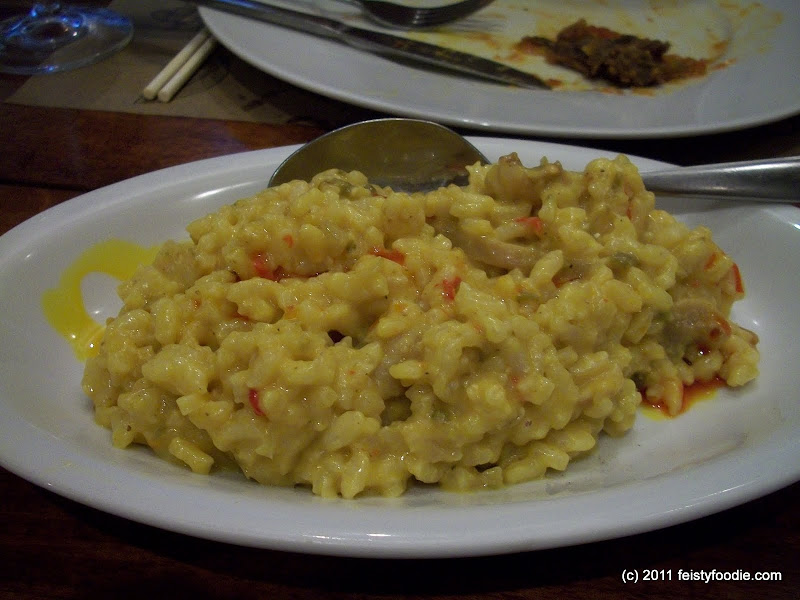 CT says: Full as I was, I LOVED this risotto and had trouble stopping myself from finishing that huge plate. The risotto was so creamy and the scallops just melted a little in your mouth. Mmmm… I really want to eat it now looking back at the picture.

8th course: scallop croquette with warm tamarind sauce. I thought it was kind of strange when we received another scallop course. The croquette was similar to a crabcake. Unfortunately all of the innards were finely chopped so it was hard to detect what was in it. The star of the plate was the warm tamarind sauce. The sauce was sweet, tart, tangy and savory all in one bite. I could eat it on its own. 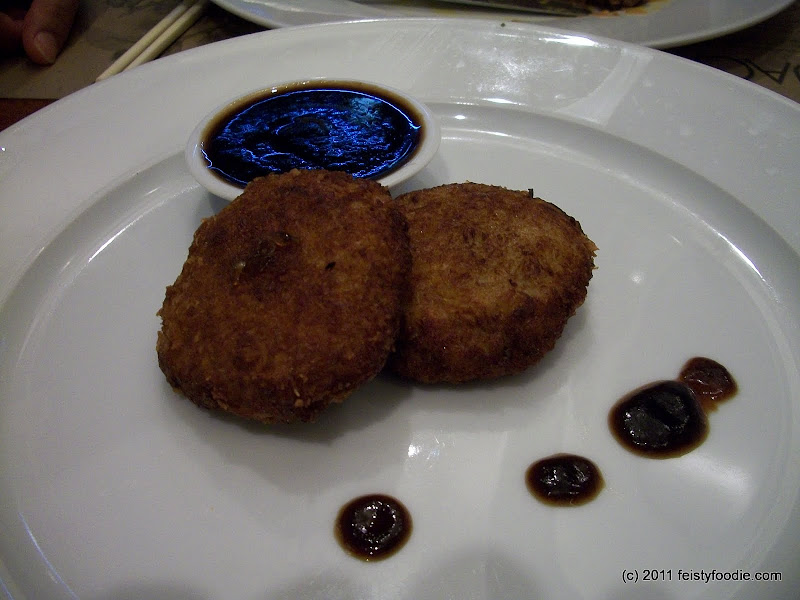 CT says: Oops… I ate too much risotto. The croquette was nice- thin and crispy on the outside, moist on the inside. The tamarind sauce was really tangy and good too. However, if I were to continue eating scallops, I wanted more risotto.

When does it stop? Why do they keep bringing more food out? 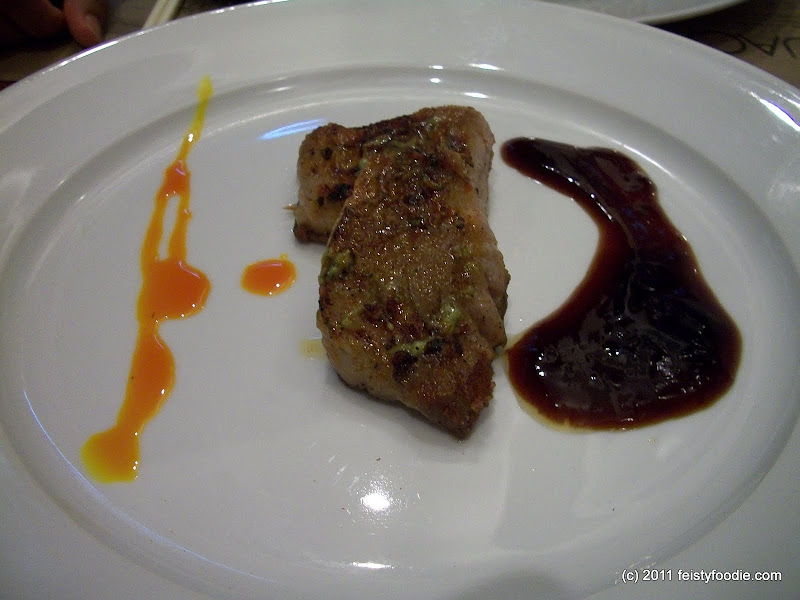 CT says: Nicely cooked, but I was way to full to enjoy it at this point.

10th course: shrimp sauteed with garlic & oil. Although we were both beyond full at this point, the shrimp were too beautiful to go to waste. They were served with a very spicy hot sauce that helped aid in the digestion; burning anything that got in the way. It was quite the pile of shrimp for us to end the meal. 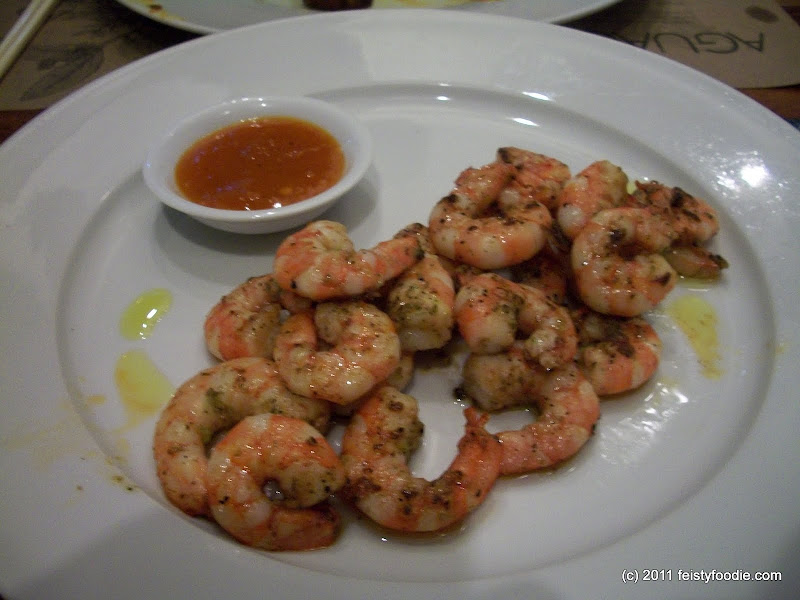 CT says: Full? Who’s full? Not me! Gimme those shrimp!! Sweet and juicy little morsels of deliciousness. Not the last course I would’ve expected, but soooo good! And while I love me some hot sauce, it wasn’t needed as these shrimp had plenty of flavor of their own.

Dessert: profiterole with maracuya filling and maracuya sorbet. Maracuya is the Spanish name for passion fruit. The dessert was relatively small which was a nice relief. The sweetness from the fruit wasn’t as overpowering as it usually is and helped cleanse the palate of all the savoriness we just ingested. The citrusy sorbet was almost creamy in consistency. 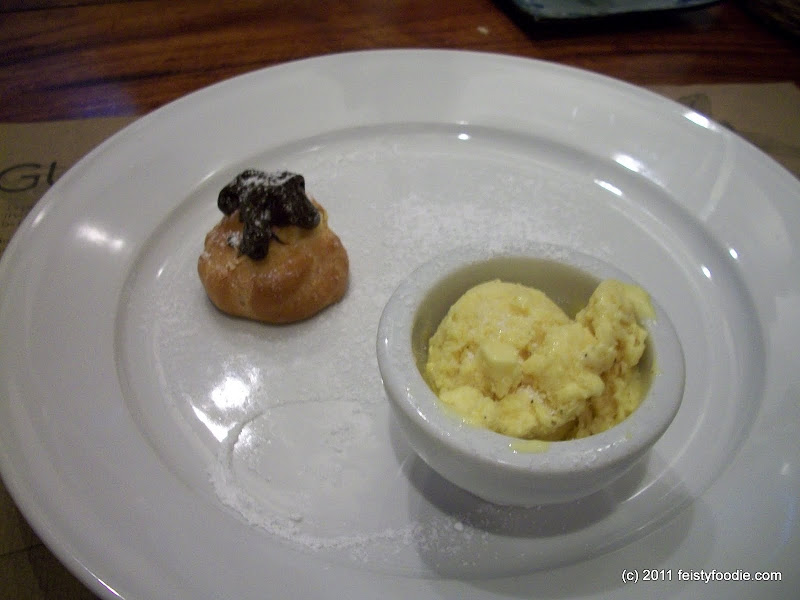 CT says: I’m a big maracuya fan! Though you get passion fruit here in NYC (mostly just Chinatown), it’s not quite the same. This place did the fruit justice too. Great light dessert to finish a truly amazing meal!

Take a look at the check. Shockingly cheap! 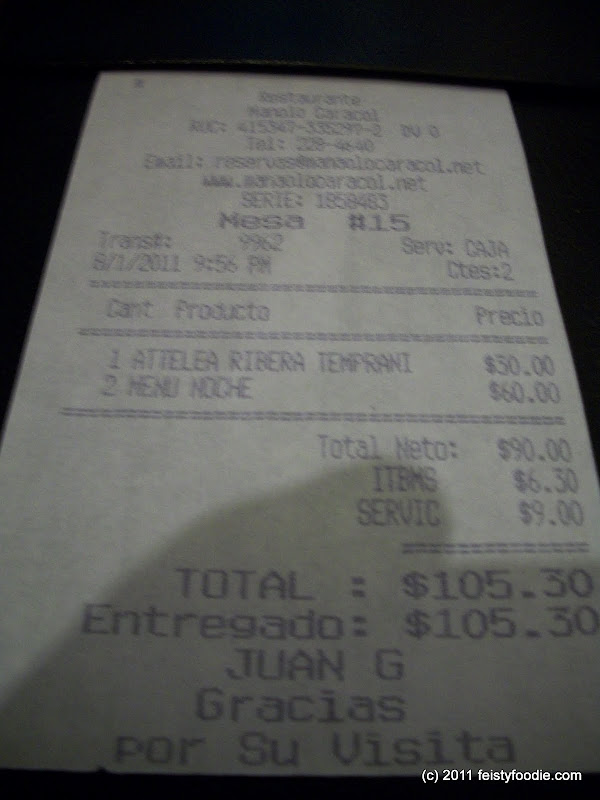 All in all, Manolo Caracol was amazing. I am so glad we gave it a second shot. While the food wasn’t very inventive, it was cooked well and the ingredients were top notch. We in a Momofuku Ko-like pain by the end of the night(Those of you that ate at Ko know what I am talking about.) If you find yourself in Panama, you MUST GO to this restaurant.