While my partnership with Barilla has come to an end, it ended on one of the sweetest notes a partnership ever could: the Andrea Bocelli concert in Central Park.  I was rewarded with VIP tickets to the concert, which meant I had access to seating and food courtesy of the concert’s biggest sponsor, Barilla.  A little something about me: I like music, but I can easily sit for hours working in complete silence (as I am right now, minus the construction noise outside my window; part of living in NYC).  I’m not a huge fan of live music as I find it’s often too loud for me to comfortably enjoy, and I’m just… eh… on concerts.  I’ve been to a handful in my lifetime, but it isn’t something I seek out.

All this to say: if I didn’t have VIP tickets, I wouldn’t have gone to the Andrea Bocelli concert.  I didn’t know much about Bocelli beforehand (though I Google’d and it was enjoyable), but either way – eh.  I already went to a concert this summer, which is more than I go to most years, but I had the VIP tickets, so why not?  Even though unfortunately it turned out to be a chilly, rainy night, my companions were awesome and the music… perhaps not quite under the stars the way Barilla envisioned… but the music was magical.  Where else in the world could you attend a free concert outdoors in a park smack dab in the middle of a city, while it rains around you, but people gamely stay in their seats, holding umbrellas over their heads, and just enjoy the music?  (I actually witnessed the people in front of me offer an umbrella to the couple in front of them, who didn’t have an umbrella… which I thought was really nice of them.)

It was an amazing night, and I’d never have attended if not for Barilla.  Thank you, Barilla, for the once in a lifetime experience!!!  I posted some videos to my YouTube account – the video is not that great, but the audio is pretty clear.  youtube.com/feistyfoodie 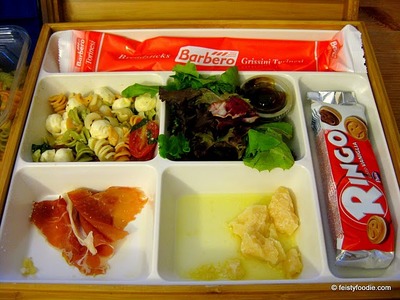 As for the food provided (yes, it’s always about the food!), as we walked into the VIP area, we were handed these huge bags with an insulted bag and a bottle of water inside.  And inside the insulated bag was a huge wooden box – the volunteers at the event told us “there’s a bento inside the bag!” – with this inside.  Breadsticks, a salad with balsamic vinaigrette, pasta salad with mini mozzarella balls, cheese, prosciutto, and creme sandwich cookies.  (I took these pictures at home after the concert because I was too cold and it was too rainy to comfortably eat this at the concert.)  I totally saved this tray, expect to see it in future Reinventing the TV Dinner posts, and I might even use it for a picnic sometime… (well when the weather turns nice again, as it’s totally chilly at this writing.) 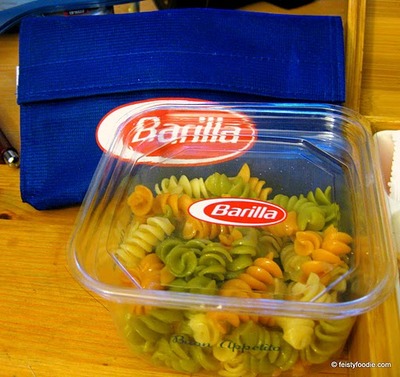 There was also a tent area to pick up green tea or peach iced tea, gelato (though I think they nixed that idea), plain pasta salad, and inside the blue pouch was a prosciutto and mozzarella sandwich, very yummy.  During the 20 minute intermission, they also handed out hot pastas, but I wanted to stay in my seat to keep it warm and dry, so we didn’t move.  Hahaha.

Overall, though, it was a very well-run event, organized, enjoyable, and extremely fun.  I’m so glad that I stuck out the rain and bad weather to listen to Andrea Bocelli, all the special guests – including Celine Dion and Tony Bennett (I recorded almost all of Bocelli & Bennett singing New York, New York – so check out the link above and enjoy!) – and have a fabulous evening under the clouds with my friends.

Thank you again to Barilla for sponsoring such a lovely event!!!

Please note that though I received my tickets courtesy of being a Barilla Blogger Ambassador, I was under no obligation to post about the concert, nor did I receive monetary compensation to do so – this is outside my agreement with Barilla.  Opinions expressed above are my own, as usual.