The morning after the wedding a breakfast was held about 20 minutes away from the resort at the Miraflores Locks of the Panama Canal. It is the best place to see ships go through the canal and learn about the building and history of the canal with its good sized visitors’ center. The canal was pretty awesome and we were fortunate to have seen a ship go through this set of locks.

After we were done we headed back to the resort for some time by the pool and enjoy the brief window of non-raininess before heading back to Panama City for the rest of our vacation. After we got all settled in our new hotel, I decided I was in the mood for a good steak. I remembered seeing a restaurant called Gauchos Steak House when we were in the city before the wedding and it looked right up our alley. Argentinians know their steak and this was the closest I had ever been to Argentina, so we gave it a shot.

The restaurant layout was pretty cool since it was inside of a large, old house. As we were being seated, I saw the grill had a large window that was asking to be pictured. After confirming with the waiter, I went ahead and snapped a pic. Now that’s what I call a grill! 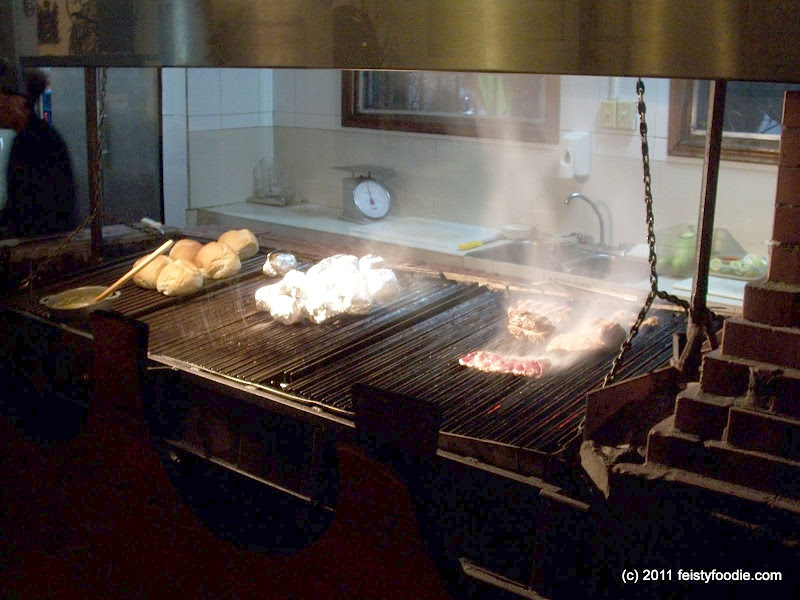 As you can see on the left side of the grill, they grill their bread. We were both quite hungry at this point, so we dug in heartily. The char on the bread gave it really good flavor. 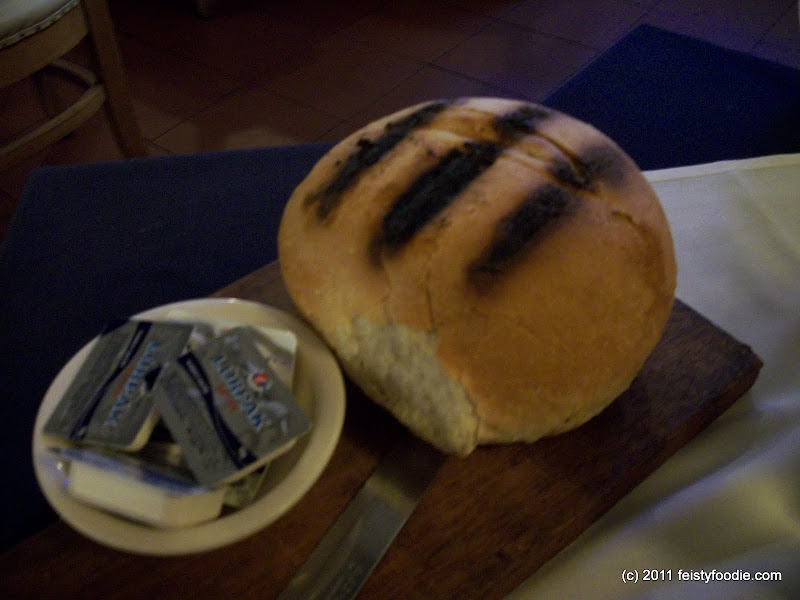 I was also impressed that there was a little table for our bread tray to make room for other dishes. It reminded me of the stool given for the ladies purse at Daniel or Per Se. 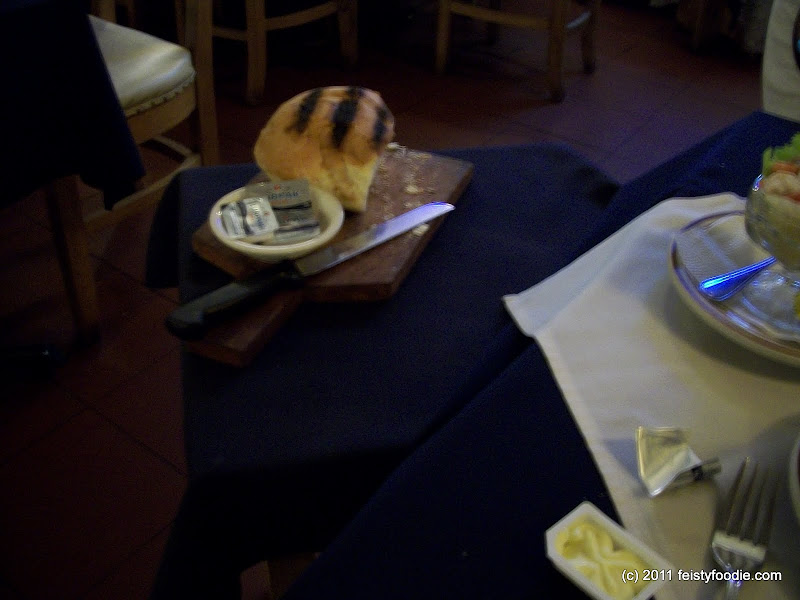 The appetizers were pretty cheap, all around $6. 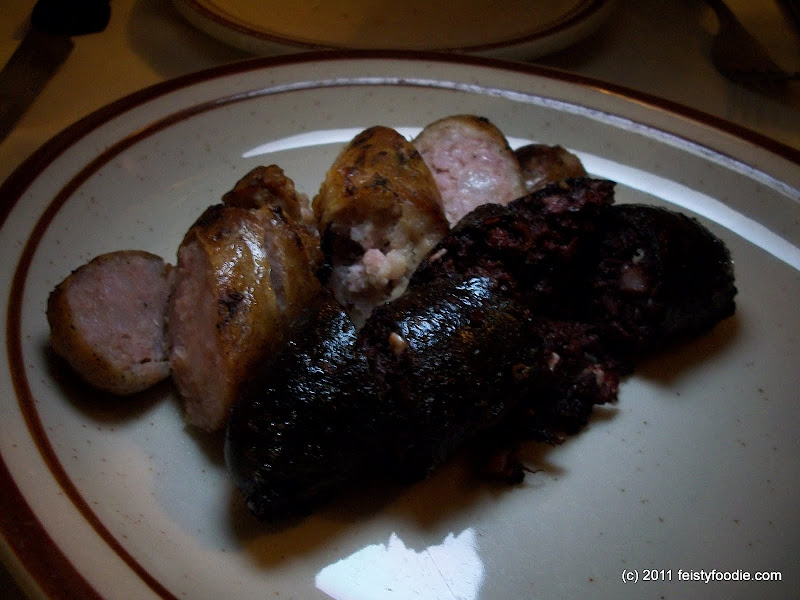 CT says: Ever since my high-school summer in Spain, I’ve been trying to find a morcilla like the one I had there. While this one wasn’t the same, it was really tasty. Both sausages had great flavor and I quickly chowed down.

I ordered the Ceviche Mixto. It had a nice variety of seafood including shrimp, octopus and fish. There was a lot less onion in this preparation than the one we had at the fish market, so it wasn’t as spicy. It was a good base for all the grilled meat that would be following. 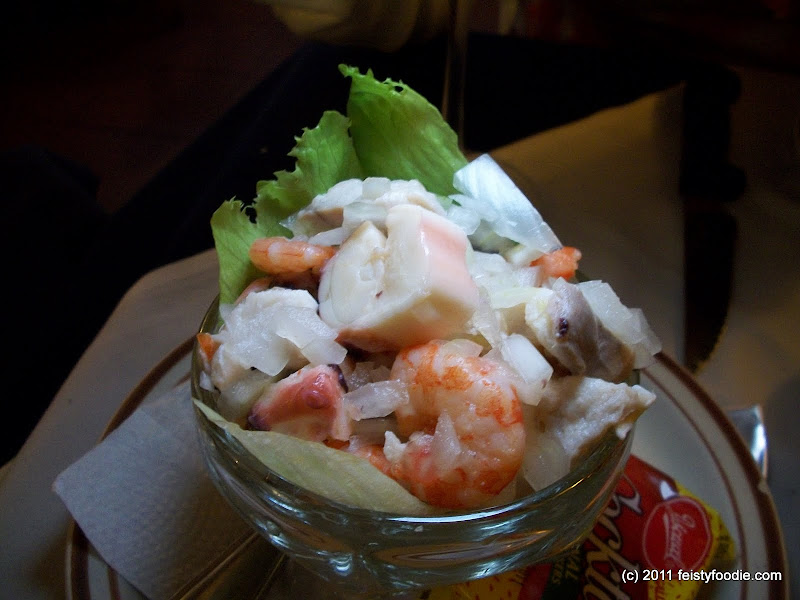 CT says: If ordering too much ceviche was possible, we might have been pushing our limits. However, all the ceviches were so fresh and delicious that we just couldn’t stop ourselves. Yum!

The appetizers were accompanied by two sauces. A tomato/shallot vinaigrette and a salsa verde/chimichurri. We were both big fans of the salsa verde. 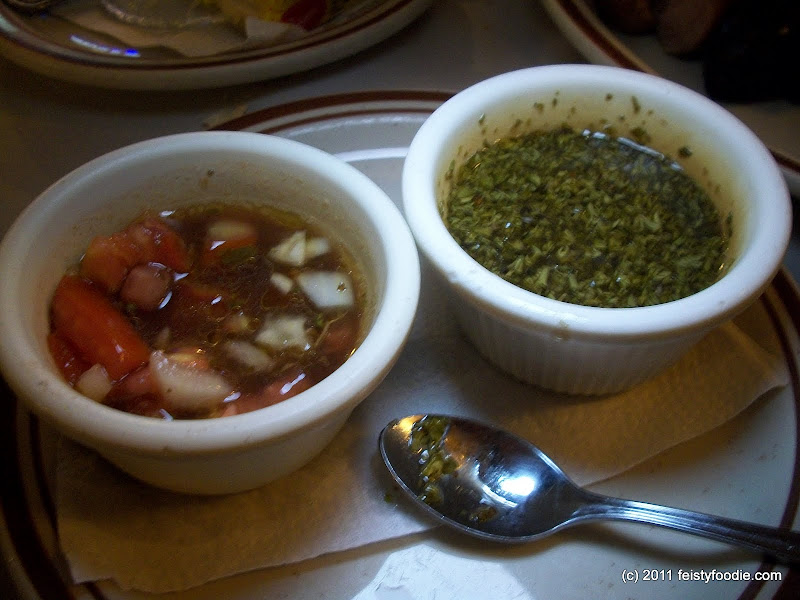 CT says: I believe some people might call this stuff “crack.” I just pointed to the bowl and asked for more. Lots more.

I believe CT got what amounted to a NY Strip. 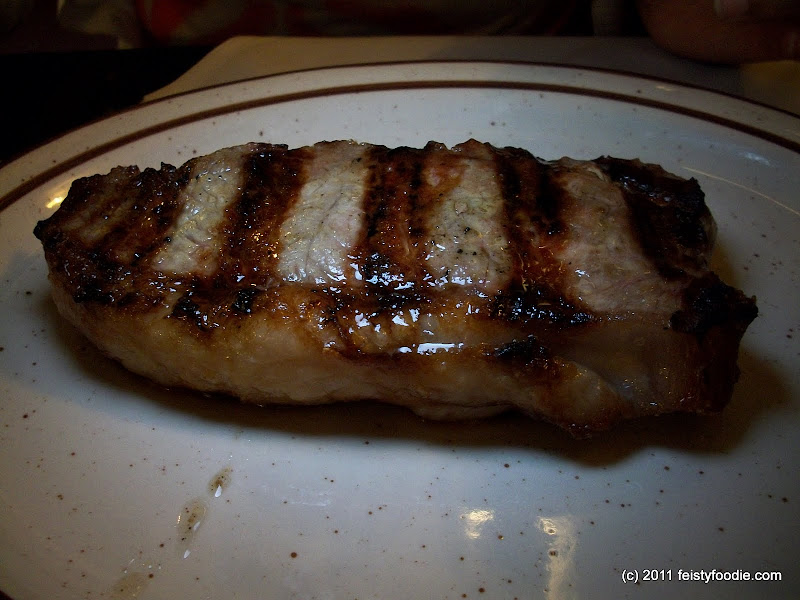 It was cooked to a perfect medium rare. 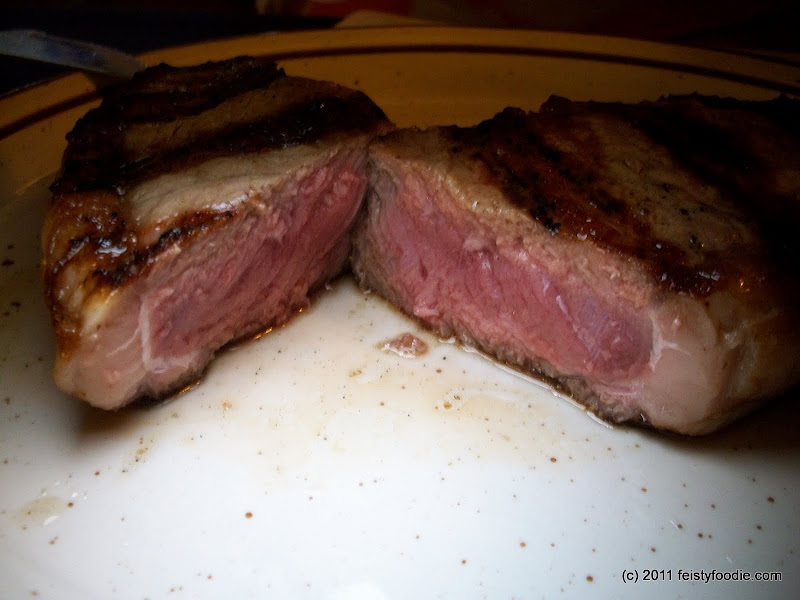 It came with choice of sides. She went with the mashed potatoes. 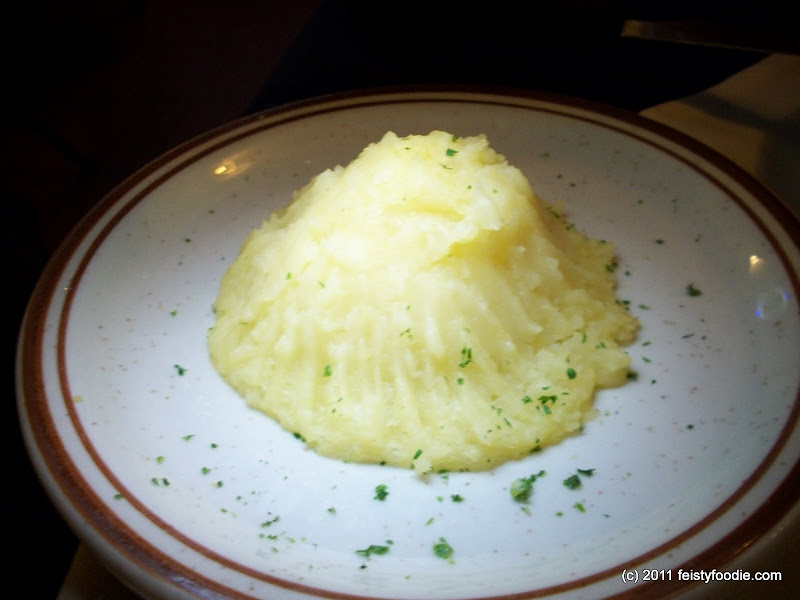 CT says: The meat was cooked perfectly! A nice char on the outside and dark pink on the inside. So juicy, tender and flavorful. Since I’d eaten fries earlier that day, I opted for the mashed potatoes and I was glad I did! They were buttery, garlicky deliciousness and paired so well with the meat. Not too heavy with butter, but went down smooth. Can’t go wrong with well prepared meat and potatoes!

Since I was on vacation and calories don’t count, I ordered the mixed grill. It had skirt steak, short ribs, and I think also a NY Strip. The meat like CT’s was also cooked perfectly. All three had a nice butter bath while on the grill, which made the already tender meat as great as it gets. I was a little surprised that skirt steak was included on the plate as it doesn’t make for the best steak on its own. I prefer it in tacos or sandwich form as it can get chewy if not cut properly. The short ribs and strip were excellent. I definitely got the meat sweats which is always a sign of a good meaty meal. 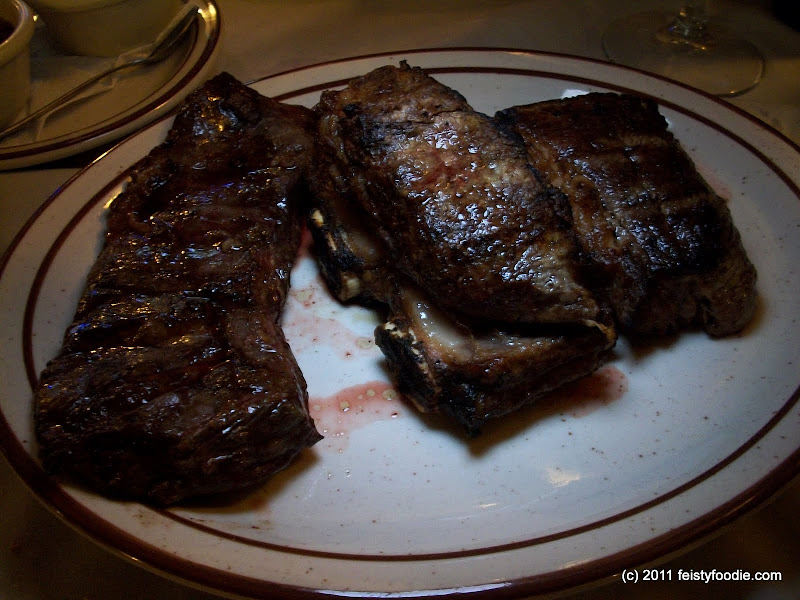 I got fries as my side. They were pretty meh, but I didn’t really need any more food so it wasn’t a big deal. 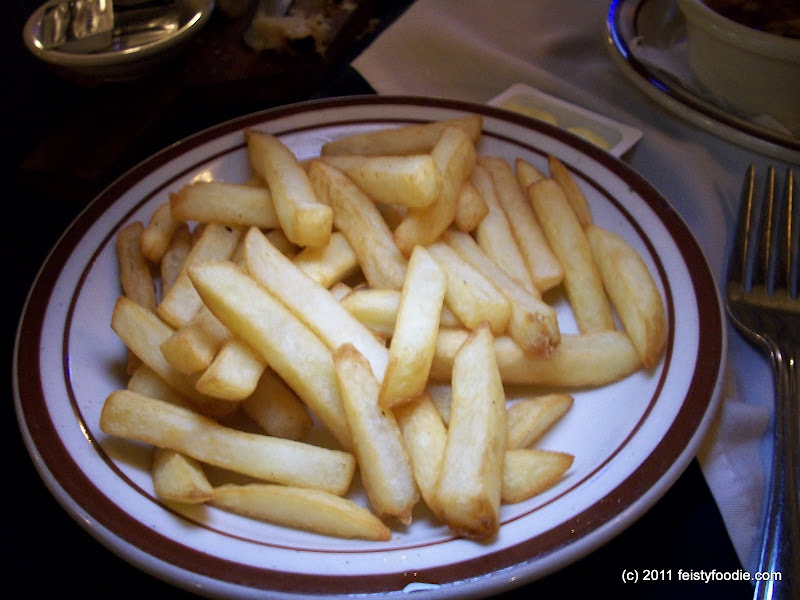 We got another plate of the same sauces with the addition of a steak sauce. This sauce was pretty sweet and really wasn’t needed on the already perfectly seasoned steaks. 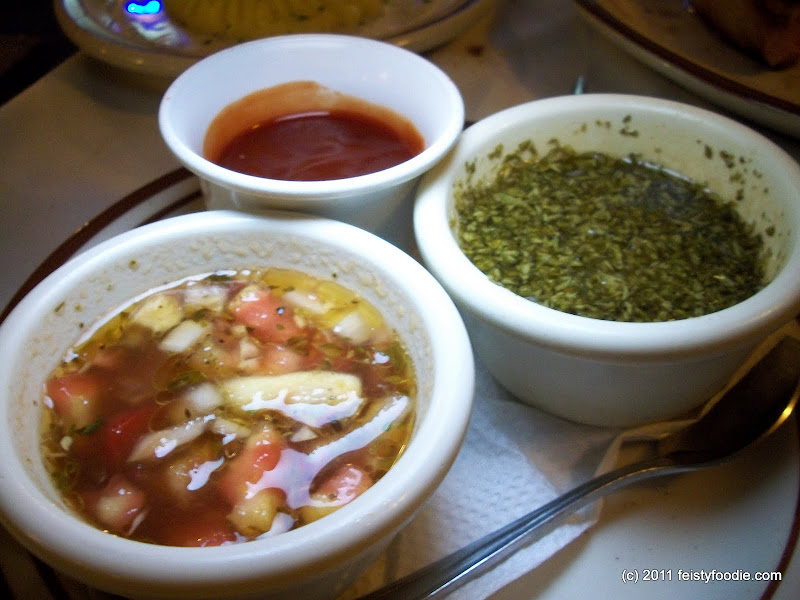 We skipped on dessert and were presented with a little cup of toothpicks. It was a nice touch to end the meal, rather than grabbing one from the hostess stand. 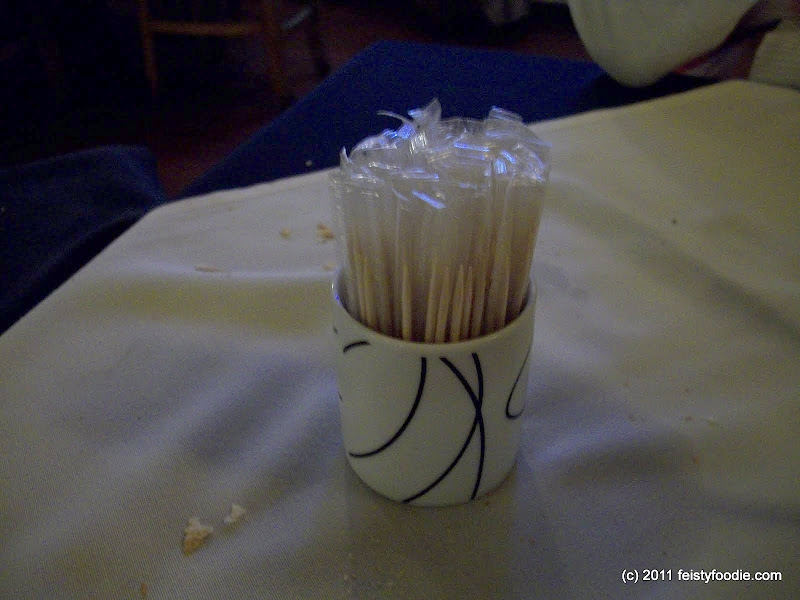 All in all, Gauchos Steak House knows their meats. I was in a steak mood and got all of my desires fulfilled. One of the reasons you hardly read a review of a steakhouse in NYC here is that they are all very expensive and not that special IMOH. I’d rather spend half the money somewhere else and get a better meal. Gauchos set us back $105 include a bottle of wine, tax and tip. This was considered a splurge restaurant down there, but I considered it a bargain. A tasty, tasty bargain!