After an afternoon of upcoming dinner prep and relaxing, we headed out to meet our friend, TX, at Boqueria for tapas. It was the last day of the Blackboard Eats deal of 30% off for the restaurant, and we knew beforehand that we definitely wanted to take advantage of this deal. We had all been to Boqueria before and enjoyed their wide selection of tapas paying full price, so the discount was just icing on the cake.
.
They don’t take reservations for parties under 6 people, but with the monsoon going on outside, we were seated almost immediately. After ordering some drinks, we started off with eight tapas for the three of us. Some of the tapas were small, so we figured we could always order more later.

Cojonudo- Fried quail eggs and chorizo on toast. The yolk was nice and runny, but the egg flavor overpowered the chorizo. 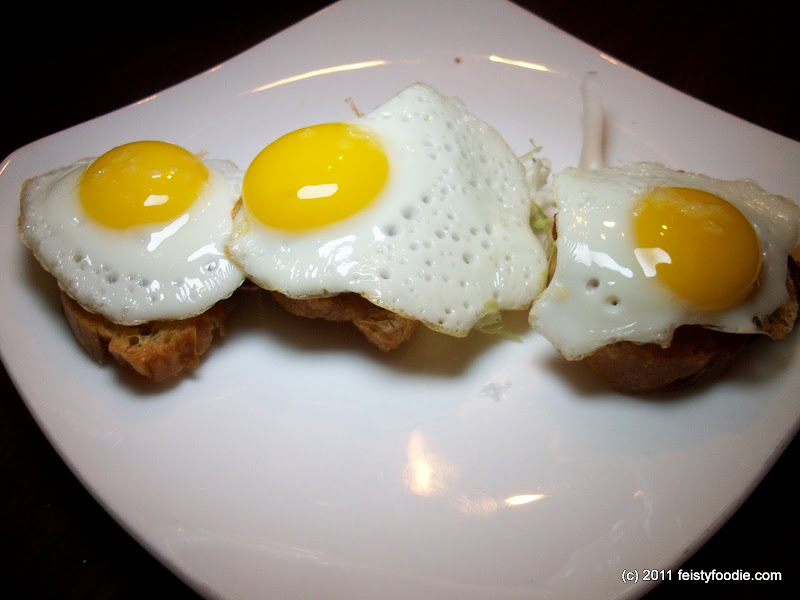 CT says: This was my first choice and I enjoyed it! Though the chorizo could have been cut a little thicker, I liked the saltiness combined with the runny egg and crunchy toast. I’d get it again, for sure.

Espinacas a la Catalana- Sautéed spinach, garbanzos, pine nuts, garlic, raisins. I decided to order this to be “healthy.” It was quite tasty with the spinach being only lightly cooked. I could have done without the raisins. 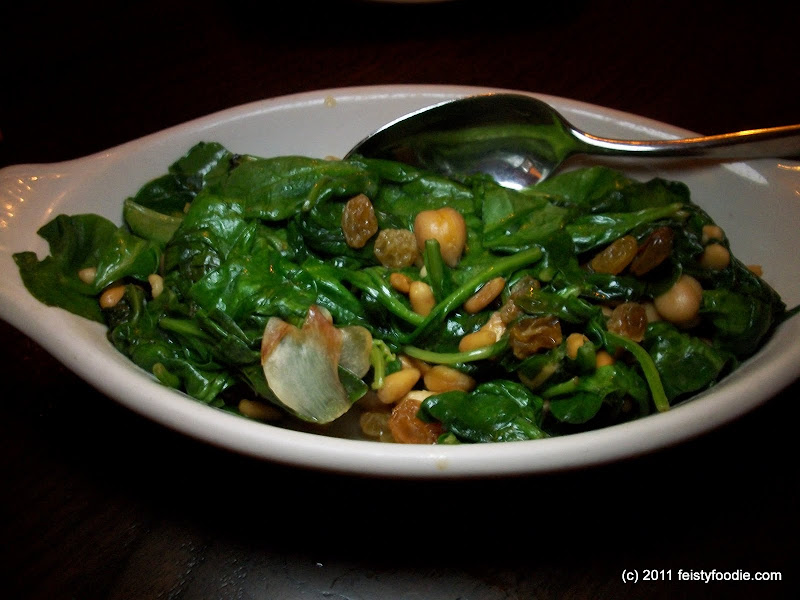 CT says: I liked the raisins! I thought their sweetness went nicely with the garlicky spinach.

Pan con Tomate- Grilled bread rubbed with tomato, garlic and olive oil. Super classic and for $5 pre-discount a must order. I enjoyed the salty olives that complemented the sweet tomato. 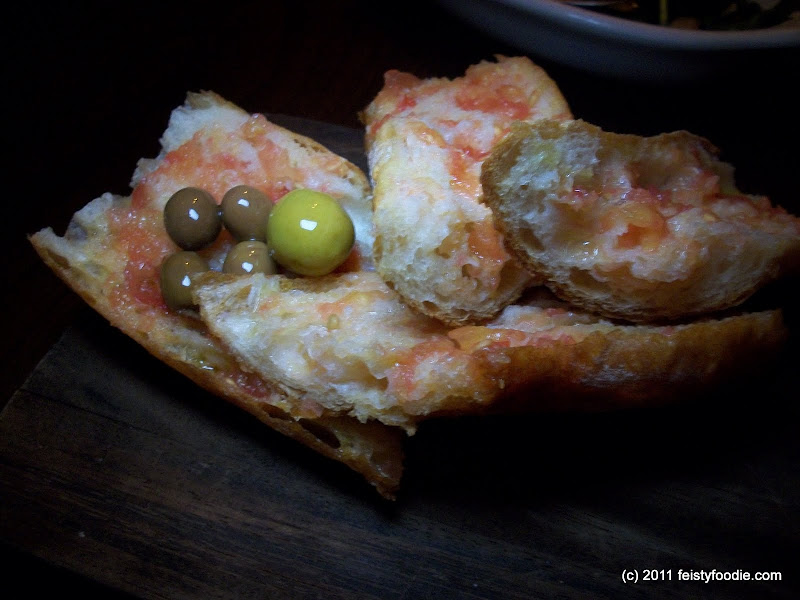 CT says: A classic and delicious, though I wished it had a little more tomato. I’m a tomato-fanatic, so I could be nitpicking, but I wanted more.

Tartar de Pimiento y Pulpo at Soho- octopus Carpaccio, roasted red pepper, scallions, cornichon. This was one of the nightly specials and a must order for me since I love my octopus. The octopus was sliced very thinly and super tender. Surprisingly it wasn’t chewy at all since it usually is 99% of the time. Quite possibly the best octopus dish I have ever had. We all agreed it was the best dish of the night. 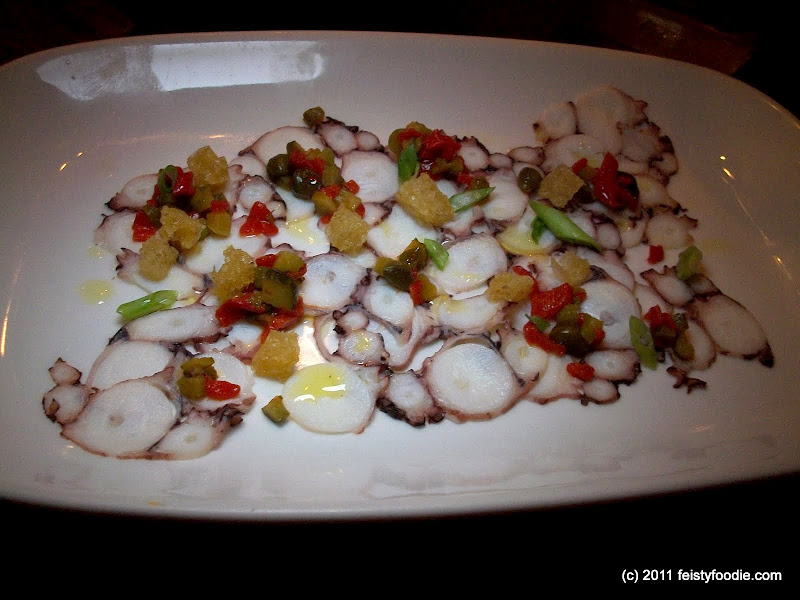 CT says: The octopus was quite soft and tender. I could have eaten this whole plate.

Bombas de la Barceloneta- Two beef and potato croquettes,“salsa brava” and garlic aioli. These were pretty good. Although the beef was a little dry, the potatoes were nice and creamy. 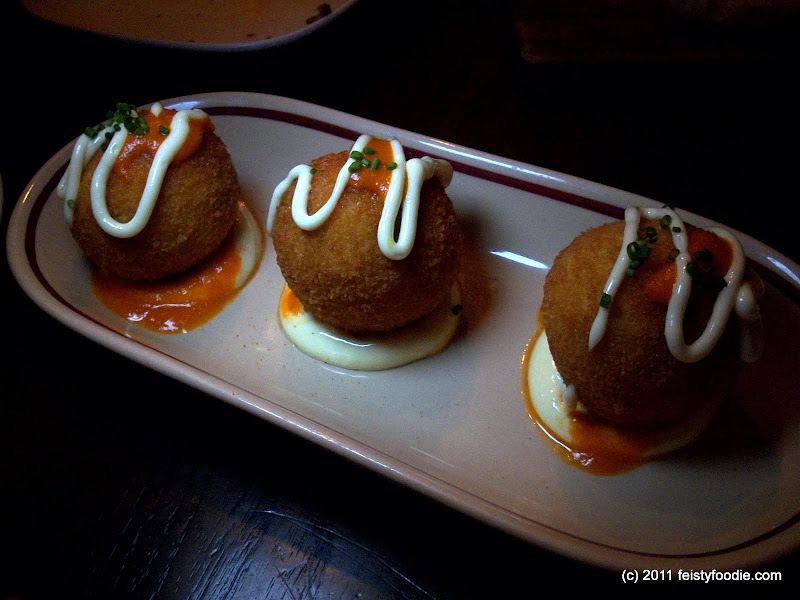 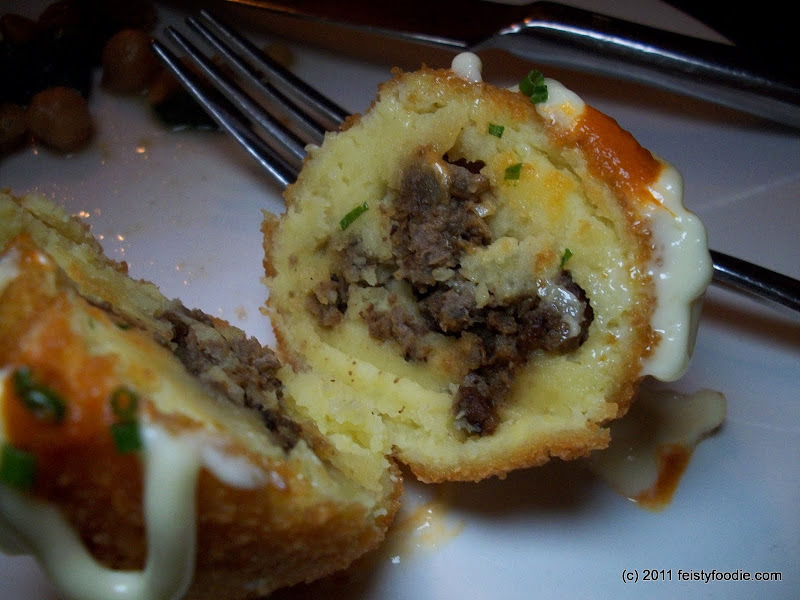 CT says: My second choice, and pretty decent. Not greasy at all. The beef could’ve been a little better and more flavorful, but I wasn’t complaining.

Txipirones- baby squid, frisée, romesco vinaigrette, tomato confit and crispy scallions. This was probably the least liked dish of the night. The squid was underseasoned and extra chewy while the frisée had a lot of brown leaves. I guess they can’t all be winners? 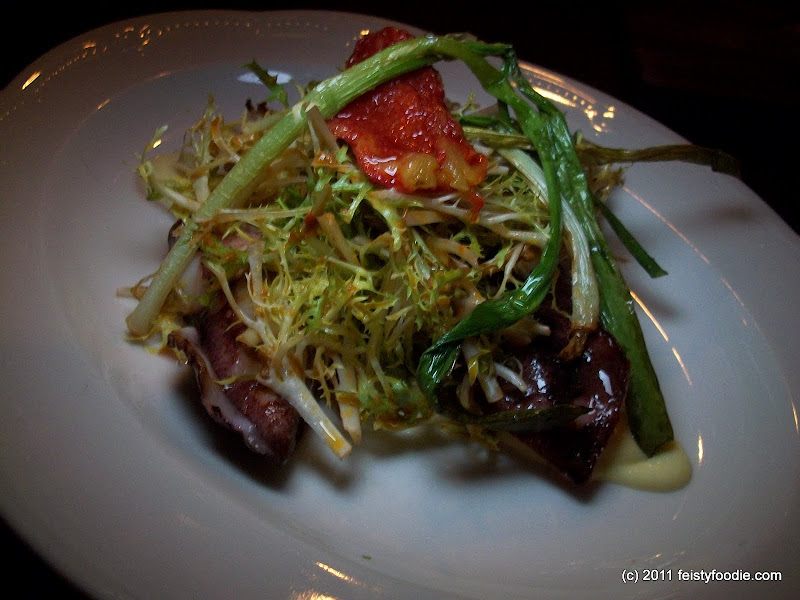 CT says: There was something off about the flavors in the dish. It wasn’t bad, but wasn’t really good either. Pass.

Albóndigas- Lamb meatballs in tomato sauce and sheep’s milk cheese. These were mediocre at best. It was pretty difficult to determine what kind of meat was used because it didn’t especially taste like lamb. The tomato sauce and the side of charred bread were the best parts of this dish. 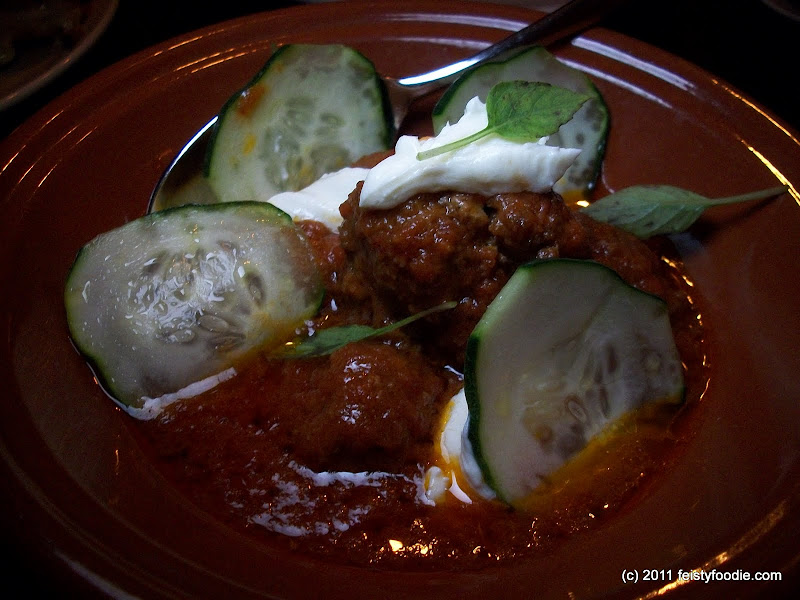 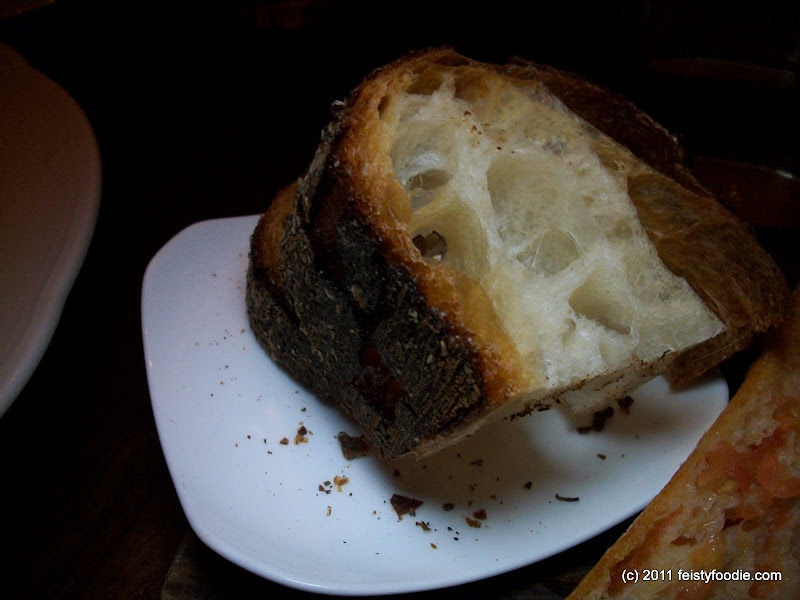 CT says: The texture of these meatballs was really strange. Not quite dry, but almost gritty? However, I really enjoyed the tomato sauce flavor. It was pretty tangy was flavorful. I, too, soaked up the sauce with the crunchy toast.

Another special of the night was a flatbread with goat cheese, figs, arugula and a cured meat that I believe was jamon serrano. There were four nice slices on a super long board. 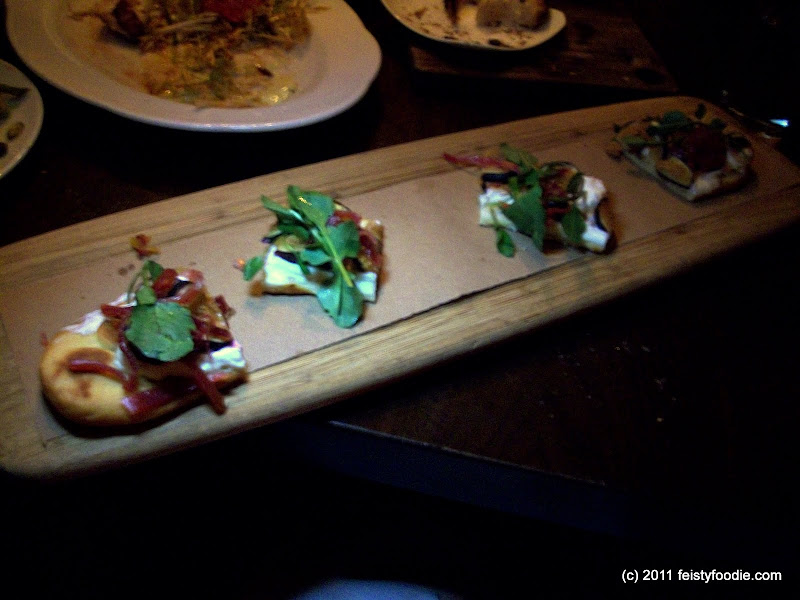 It was also another winner with the right mix of salty, sweet, creamy and crunchy. I would definitely order this again. 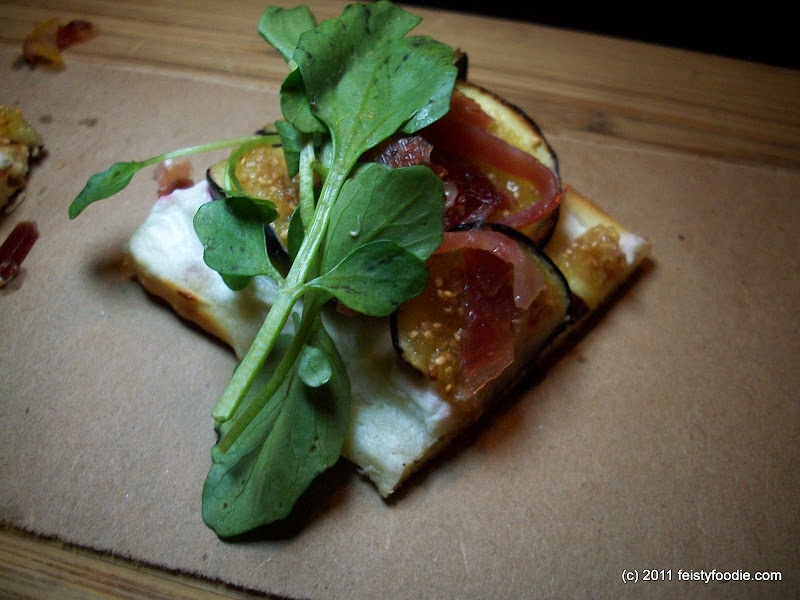 CT says: My last choice and fantastic! I love this flavor combination! Though a daily special, it is a must order if it is on the menu.

Apparently there was a rule that we couldn’t leave without getting the churros. It was a fair sized order of long churros. The chocolate sauce was nice and rich unlike what was served at Yerba Buena. Now that we are back from Panama, we have a little more self-control and were ok with leaving a churro behind. 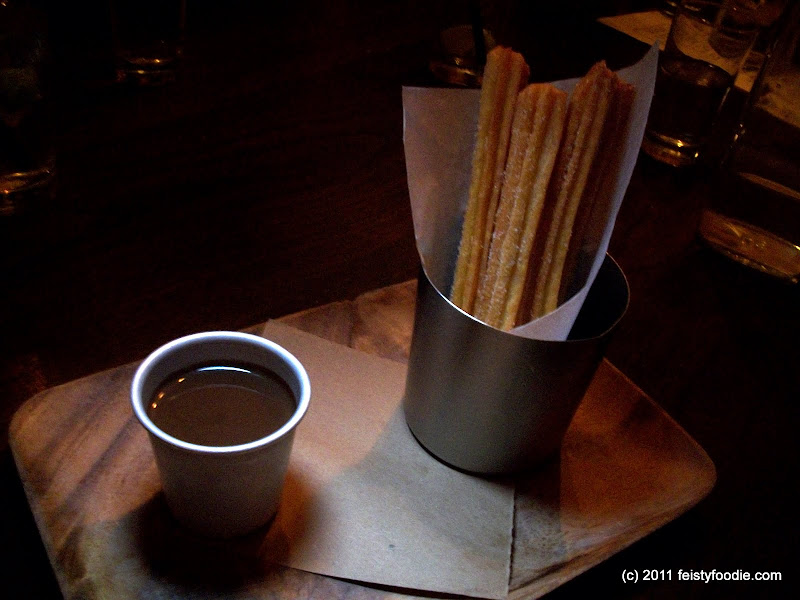 CT says: These were good churros! Warm, crunchy on the outside and soft on the inside. he chocolate, though not quite as thick as I’ve had in Spain, was thick enough to nicely coat each churro in chocolatey delight. I also appreciated that the chocolate wasn’t too sweet. Overall, a great finish to the meal!

All in all, Boqueria has a nice selection of well-made tapas. With the BBE discount and 2 drinks each, it came to a little less than $50 each. Not too bad for a Friday night dinner in Manhattan.