A couple Fridays ago, CT and I didn’t have any special plans so we decided to go out in the neighborhood. I had a voucher for the NY Comedy Club that I purchased from Travelzoo back in March(shortly after their launch party) that was just burning a hole in my pocket. Fortunately the voucher was good for a year, so I wasn’t in a major rush to use it. CT mentioned that she had a Groupon for Bao Noodles that she was also looking to use. Considering that both places were about 2 blocks away from each other, it was a no brainer.

CT’s deal was the common $15 for $30. Bao Noodles isn’t super cheap, so it wouldn’t be an issue to order $30 worth of food. For those of you wondering, Michael “Bao” Hunyh of Baoguette, Baoritto and other restaurant fame used to be associated with Bao Noodles, but no longer.

Since it was a Friday night, we started with some beer. I went with the Vietnamese “33” and CT had the Japanese Kirin Light. Do the Vietnamese and Japanese get along? Deanlo, can you confirm? I don’t think I ever had a “33” before. It was a nice refreshing lager, pretty generic tasting. 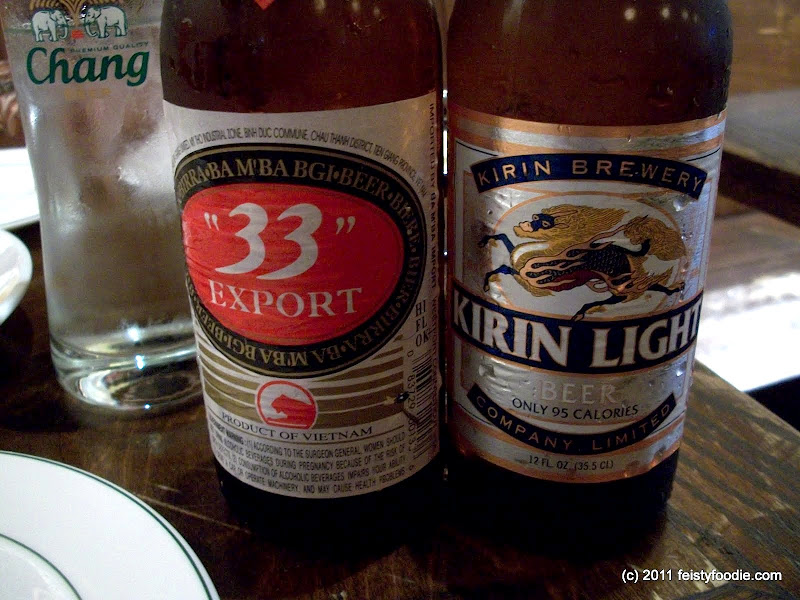 We started with an order of Summer Rolls($5.95), since it was Summer after all. I decided to be “healthy” and get fried tofu as the filling. 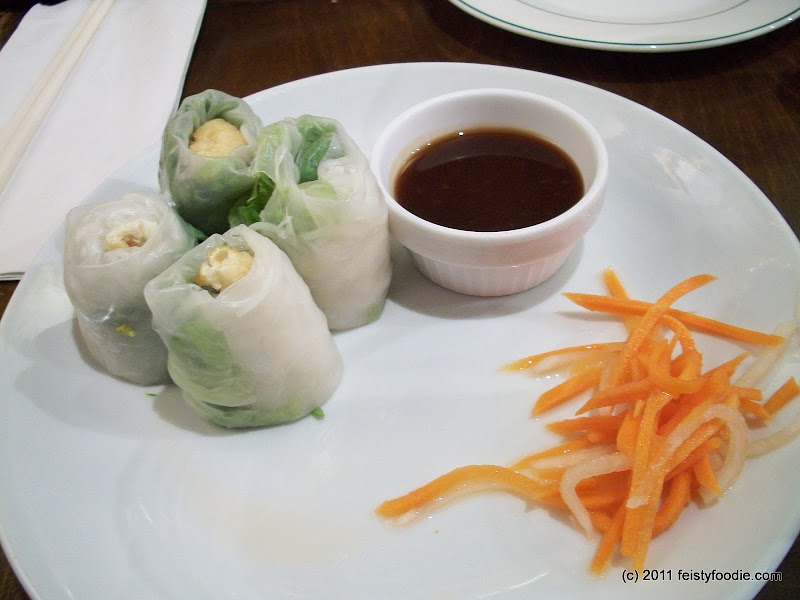 As you can see, using the term “filling” was quite generous on my part since the rolls only had two sad strips of tofu in them. At least all of the veggies were fresh and crisp. It was quite tasty after dipping in the Hoison sauce. 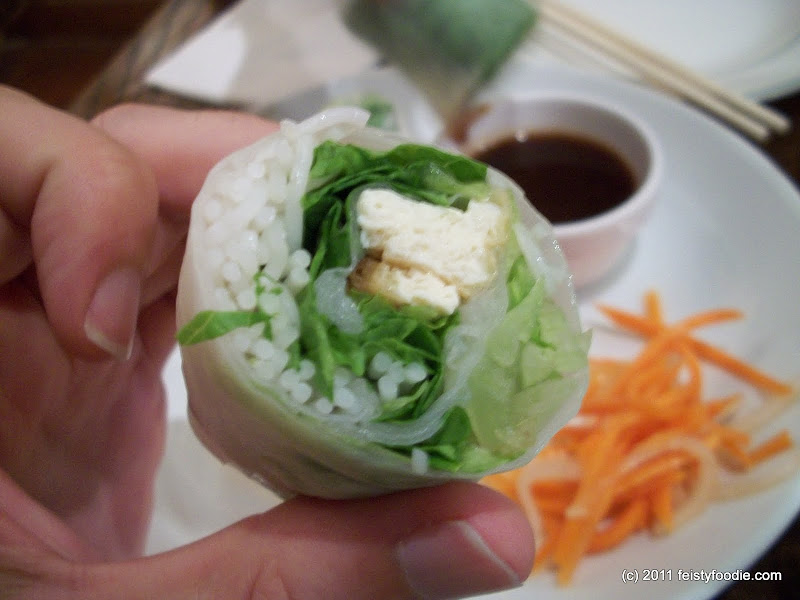 CT says: It was just ok and the filling was a little skimpy. But as TT said, at least the veggies were fresh! I’ve had the shrimp summer rolls in the past and been satisfied with them, so maybe it was just the lack of tofu?

CT had been here a bunch of times, but not that recently. So, she still had a couple “must order” dishes including:

Salt & Pepper Shrimp ($12.95)- tiger prawns coated with salt and pepper, stir-fried with garlic, shallots, red and green peppers. Served with taro fries. It is hard to see but there were a lot of shrimp underneath the small plates and taro fries. The dish on the right had a chili pepper and salt mixture to dip the shrimp in. There was also a mayo-based sauce that was good with everything. The shrimp were lightly fried and delicious. We went all in and ate the thin shells and all. The taro fries were super greasy. I’m pretty sure the chef dumped them straight into our basket from the fry basket. 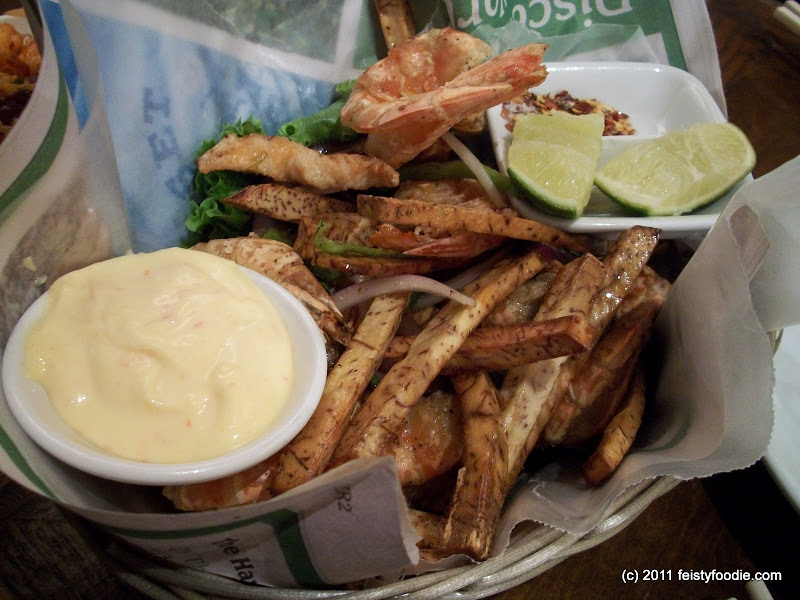 CT says: This is one of my favorites and a must-order every time, in my humble opinion. I love that flavor they have on their own, but dipped into the salt/pepper/red pepper flakes just takes this dish to another level! I could (and possibly have) eaten this entire dish on my own. The taro fries are ok if you get the ones on tops, but nothing that special.

Saigon Fried Rice ($7.95)- shrimp, Chinese sausage and tomatoes. A second shrimp dish, but totally worth it. Lots of sausage mixed throughout with a couple shrimp on top. The rice itself was very tasty. It was also very good as leftovers. 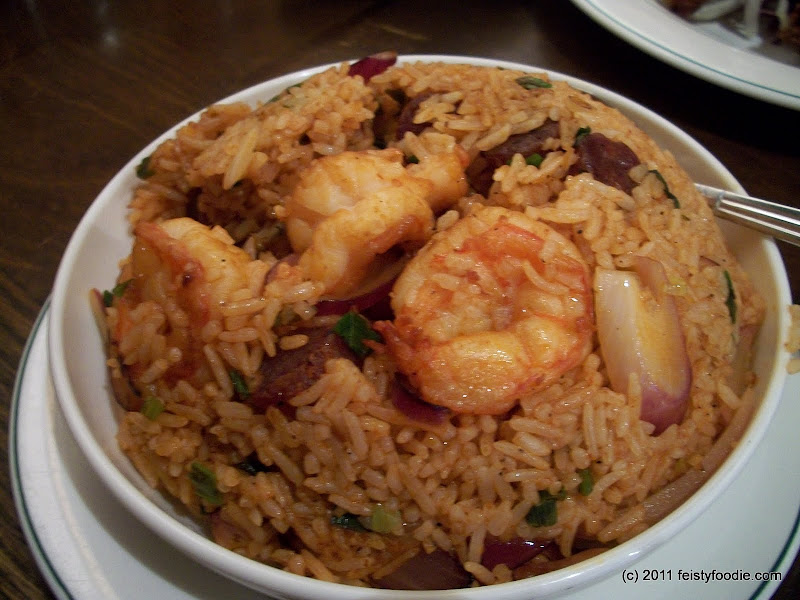 CT says: My other go to – stuffed with so many goodies and lots of flavor, why wouldn’t you want to order it? The rice is sticky and cooked just enough and you can tell it’s cooked with all the meats as the flavors really meld together. Just yum!

CT allowed me to order one dish. 😉

Panko Crusted Pork Chop ($13.95). It was served on top of a nice slaw. Unfortunately it only seemed to be one pork chop in the dish. I would have thought for that price there would have been a second chop. The pork was seasoned well and very crunchy. A couple of the end pieces got a little tough, but I managed to eat them anyway. The slaw helped to cut the heaviness of the deep fried meat. 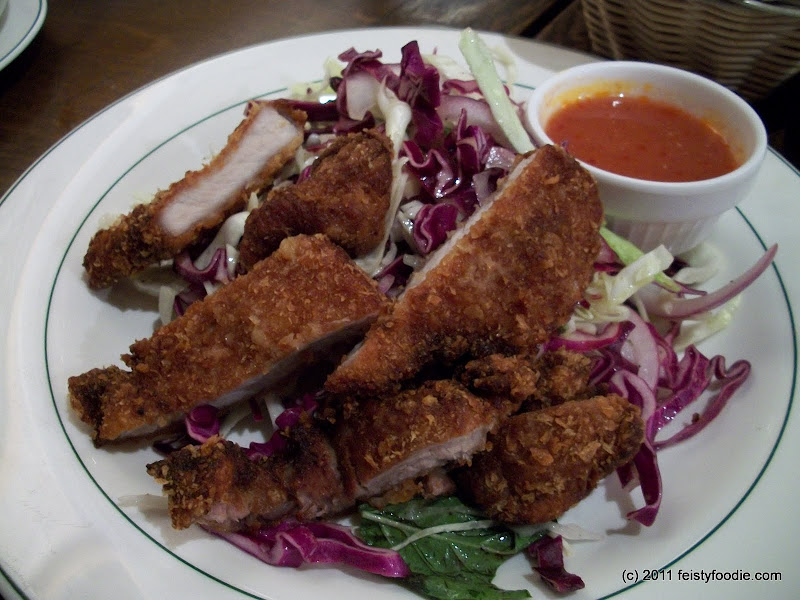 CT says: The pork chops was juicy on the inside (mostly) and crispy on the outside. It was pretty flavorful. However, I only had a couple pieces as the portion was pretty small and I was more focused on the shrimp. The slaw was a nice palate cleanser though. A decent dish, but not enough to be added to my “must-order” list.

All in all, it was a pretty good meal at Bao Noodles. We both left quite content without feeling stuffed, especially since we ended up taking half of the fried rice home. Prices were a little high, but Groupon helped alleviate that. The Travelzoo deal was very good. For $15 we got admission for two including 2 drinks and saw 7 different comics. No one I heard of before, but some were very funny. I would definitely return to the comedy club again especially since the regular prices were pretty reasonable compared to other, bigger clubs in NYC.