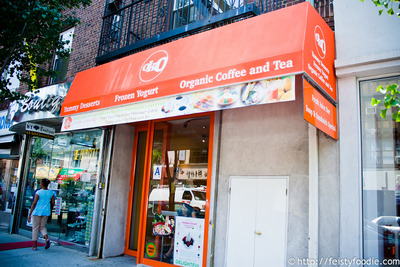 A while back, I bought a Groupon for Oko because it’s in my neighborhood, and because I didn’t realize no one I know likes frozen yogurt.  Okay, that’s not true.  Just the people I would share something like this with, no one wanted any.  So… fine.  But the last day was coming around, so I decided to walk over and use the Groupon… and pray that they had other items besides just froyo, because I wasn’t sure I could or wanted to eat $10 worth of froyo. 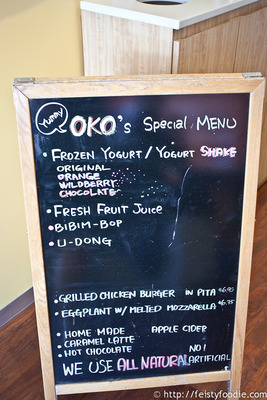 When I got there – drenched in sweat from the horrible hot and humid day it was – I was ecstatic to see that they had like, normal savory items on the menu. 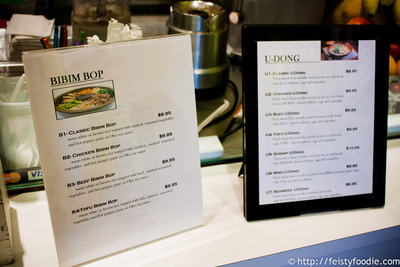 I geared up to order a bibim bop. 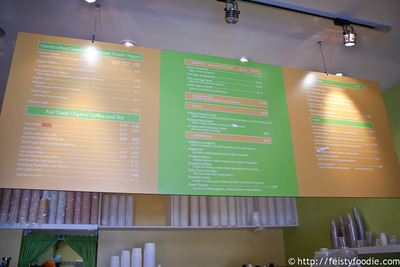 They have a fairly decent sized menu, too.  But I took out the Groupon and the woman behind the counter immediately said, “Oh, no, only good for frozen yogurt.”  She seemed apologetic, but that should have been on the Groupon or in the fine print!  Boo.  Then again, I didn’t buy it with the notion I’d get bibim bop, so it wasn’t that big of a deal.  Just that I got excited after seeing their other offerings, thinking I could order something else in addition to froyo, but then realized I couldn’t.

Also of note is that Oko has two locations, though the Groupon only mentions the Forest Hills location… and doesn’t say “only valid at this location.”  Just a note for future deals with Groupon, this place may need to be clearer in their fine print. 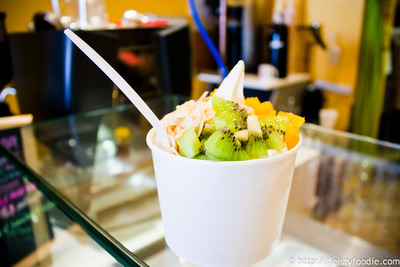 I wound up ordering and trying my hardest to reach the $10 amount, which actually wasn’t as hard as I thought.  Large froyo ($7.45) – orange flavor because I’ve never had orange frozen yogurt before and it was more interesting than the other offerings (vanilla/plain or green tea) – which came with two toppings.  I got mochi (which isn’t visible in any of these pictures), kiwi… 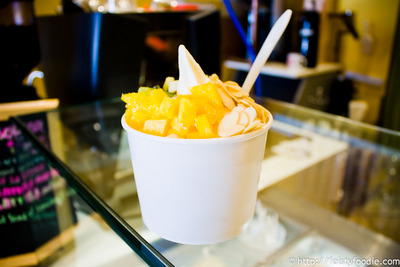 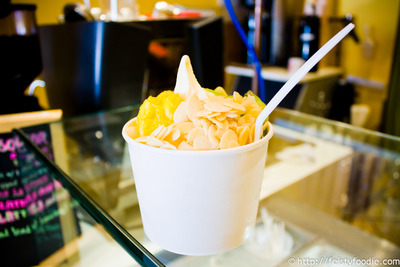 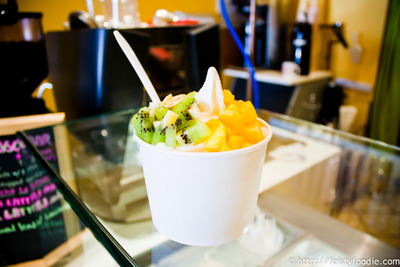 I don’t think I got other toppings – I know that my total with tax came out to just under $10.  In any case, the funny thing is, I didn’t eat this right away because I didn’t feel like it.  I took a bite or two, then asked for a lid, and ran home in the heat.  I was impressed that not much of it melted during my 10 minute run (I live about a 15 minute walk away).  I really liked the orange flavor; it was light but present, and added another interesting zing to the slightly sour yogurt.  As for the toppings, both fruit toppings were only OK to me – but the sliced almonds added such a lovely contrast, and I loved digging out bits of the chewy mochi and eating it with the cold, creamy yogurt.  SO good.  I would totally get this again with just sliced almonds and mochi, and not such a big portion (I stuck it in the freezer and ate some of it immediately, and then the rest of the course of a few days).

Yvo says: I’m not sure this will trump Red Mango as my favorite place, but it’s in my neighborhood and I can totally see myself walking over for some yogurt after a movie or something.  Of course, if I’m closer to where Barnes & Noble is, I might hit up Yogo Monster instead (which is right across the street from B&N)… I’ve not really properly tried more than a bite of theirs, and I don’t know that I’d make a special trip just for Oko.  I like that they had orange as a flavor, since that seems more uncommon, and I really enjoyed my topping choices… and I do want to go back and try their lunch specials.  Overall though, it’s OK to good, but not amazing.
recommended if you like this style of yogurt