This past Spring, CT’s parents finished putting in a patio in their backyard in New Jersey. This included a huge built-in grill, sink, and a portable tandoor oven. The best way to break all of this in is to have a big party of course. With everyone’s busy schedules, the party was scheduled for the end of July on what ended up being the hottest weekend of the year. Remember that Friday that was around 105 degrees not counting humidity? The party was the next day which luckily was a little bit cooler, but still way too muggy to be outside so everything was setup inside.

CT says: And by “a little bit cooler” he means it was only 103 degrees and we stayed in the very air-conditioned house as much as possible.

For hors d’oeuvres, we helped CT’s Mom fry up some vegetarian spring rolls and mini-samosas. 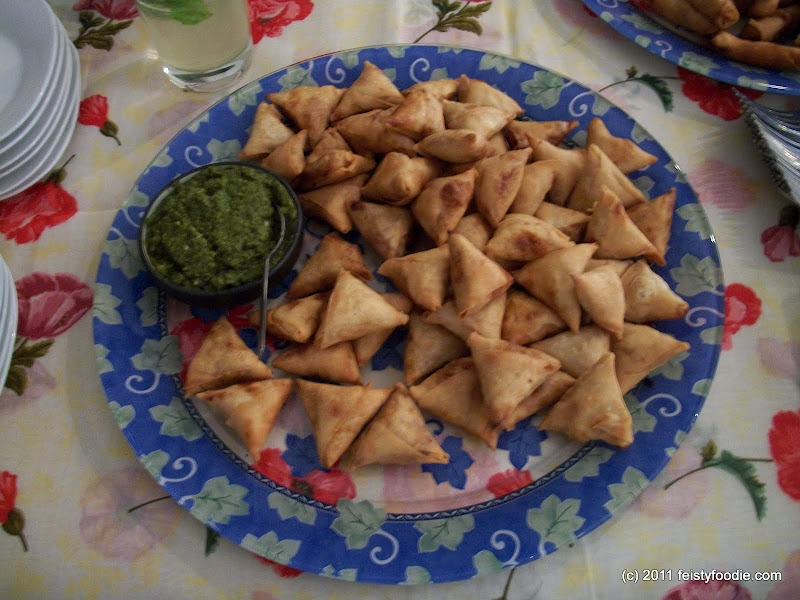 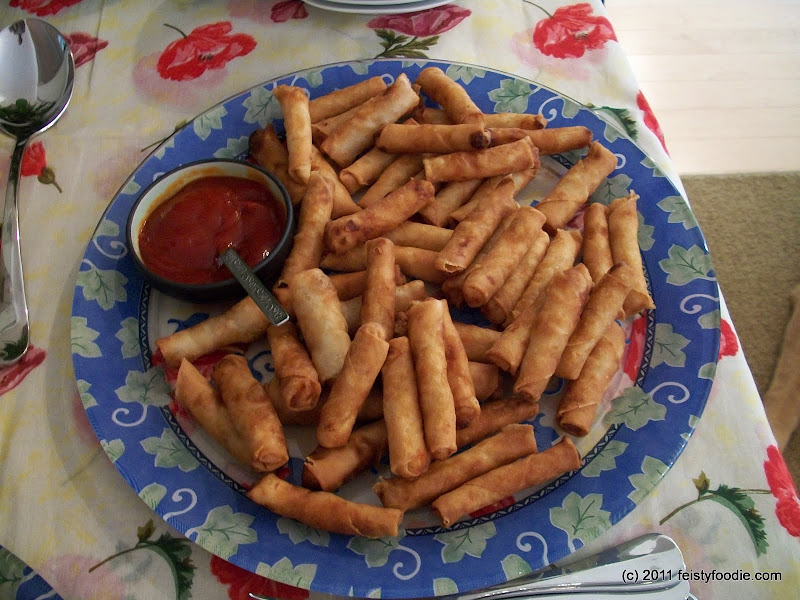 Yes, they were out of the box, but still very delicious. We fried them off early because there was so much to do and some of us ended eating a bunch throughout the rest of the afternoon. I would never do such a thing! 😉 The samosas had a nice potato mixture inside with just a touch of heat. There was green chutney and spicy ketchup used as dipping sauces.

CT’s Mom also made some chicken tikka bites, but I didn’t get a picture before they were gobbled up.

Originally CT’s Mom was going to make four salads, but after consulting with her daughters she was convinced it would be overkill. She has been having quite the bountiful gardening season, so she wanted to use the fresh tomatoes, cucumbers, basil and more while they were at their best.

A mixed green caprese salad featuring her super sweet homegrown cherry tomatoes. There were mini mozzarella balls on the bottom on the bowl. This salad helped balance out all the meat intake. 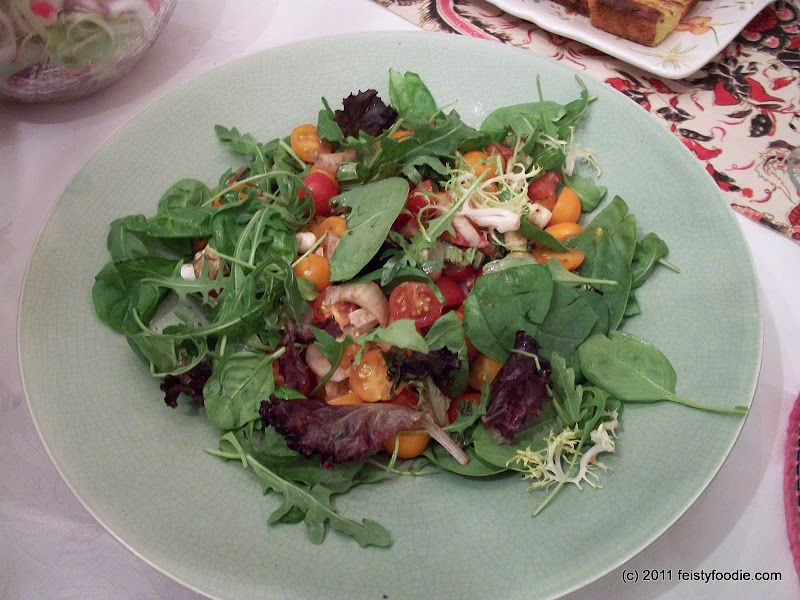 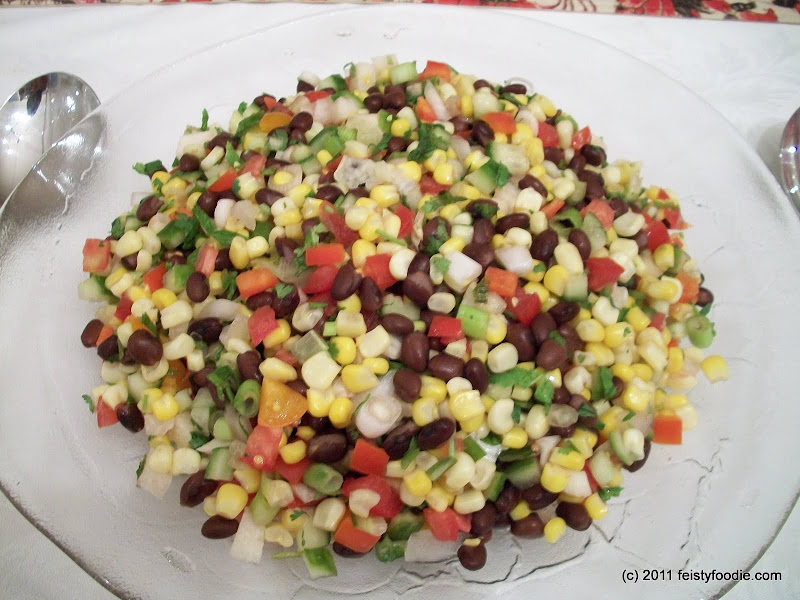 Red onions, radish, and chili pepper “salad”. Very traditional accompaniment, though not really a salad. Way too much raw onion for me, so I passed on this. 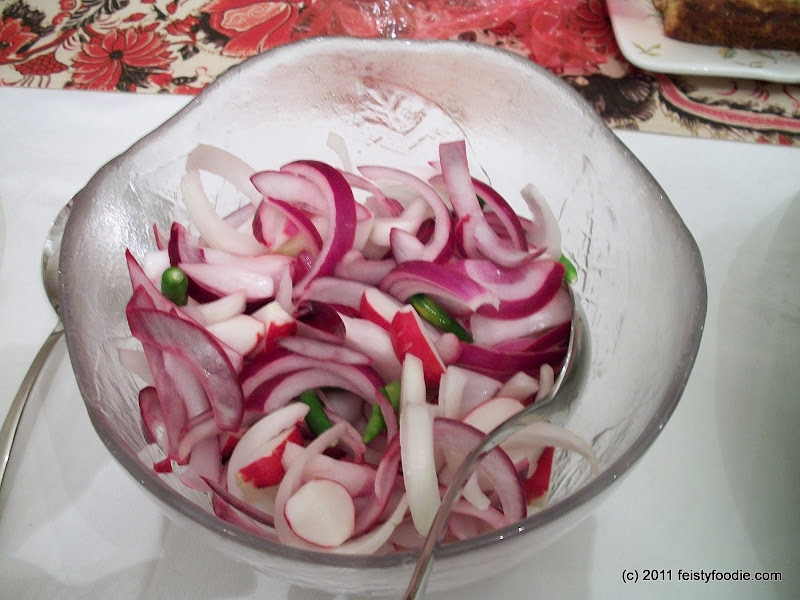 CT’s Sister made some of her famous jalapeno cornbread. Unfortunately, while she started to make it she realized she didn’t have any jalapenos, so she used Thai chilies instead, haha. The chilies were well chopped and spread throughout, so they didn’t cause too much damage while eating the delicious cornbread. 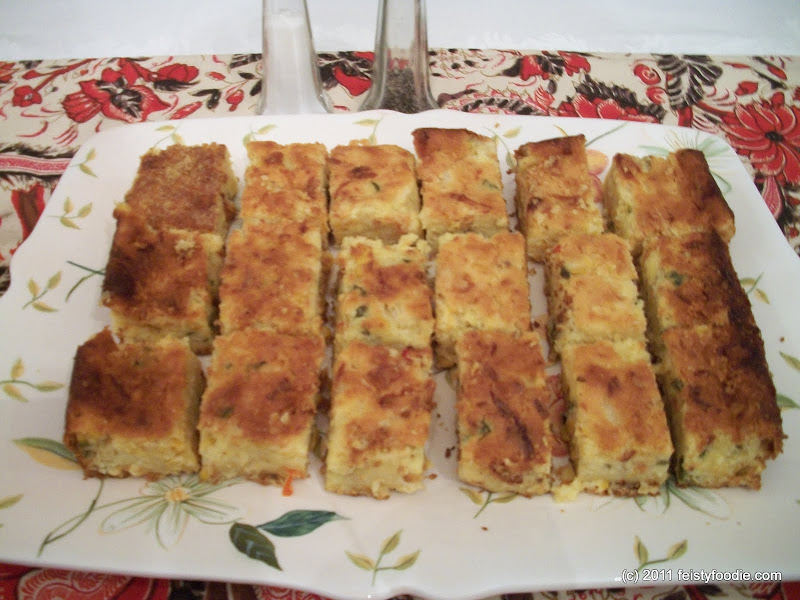 CT says: This might just me one of my most favorite foods in the world. No matter how many times I try making it, it never tastes quite the same. I don’t know how she does it, but it’s just so freaking good.

Roasted potatoes. I’m not sure what CT’s Mom did to them, but they were yummy. 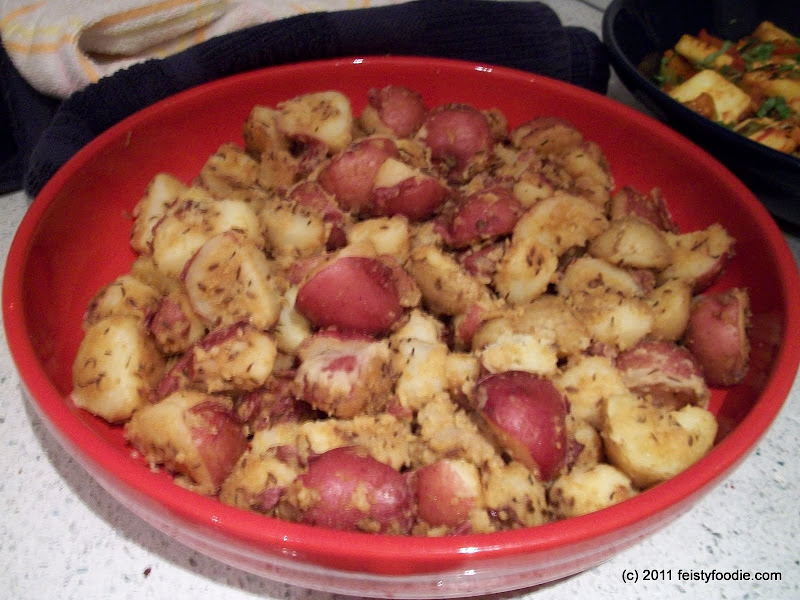 There was some more chutney and I think pickled zucchini as accompaniments to everything. 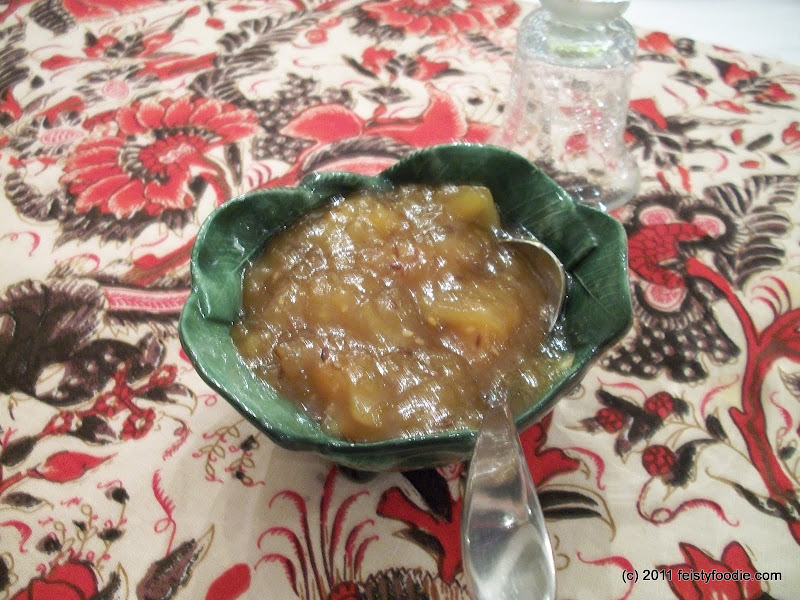 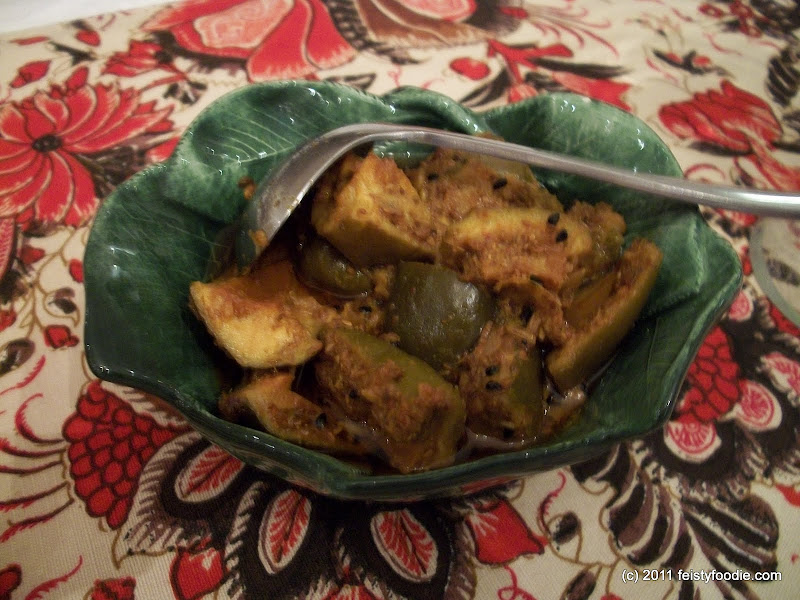 Paneer with roasted vegetables. I like paneer since it is a cheese that reminds me of feta. It is a lot milder than feta, so the flavor is dependent on what it is served with. The roasted tomatoes were very flavorful and paired well with the green onion. I found out too late that what I thought was a green bean was in fact a green long pepper. Luckily, I didn’t eat too much before I realized what it was. 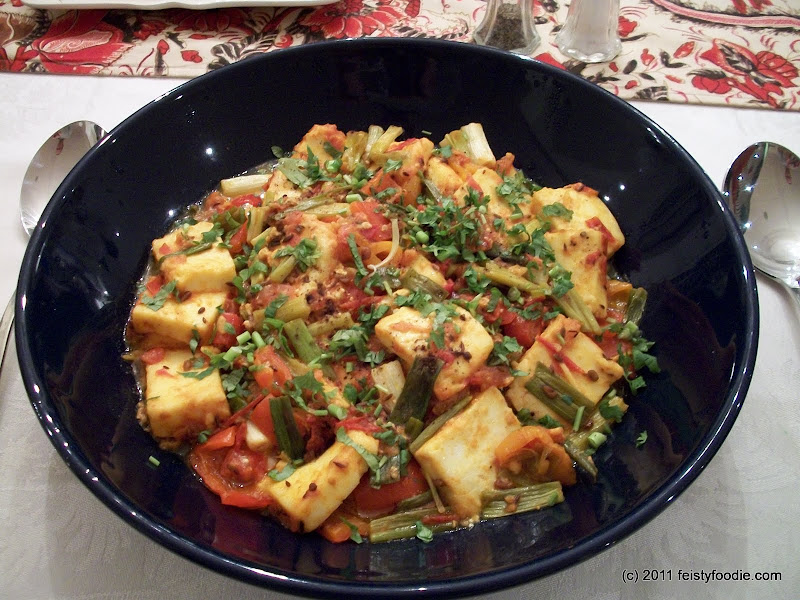 Channa with fresh sliced ginger. Channa is a chickpea stew. It was super flavorful(as most Indian dishes are) and almost made me forget that I wasn’t eating meat. 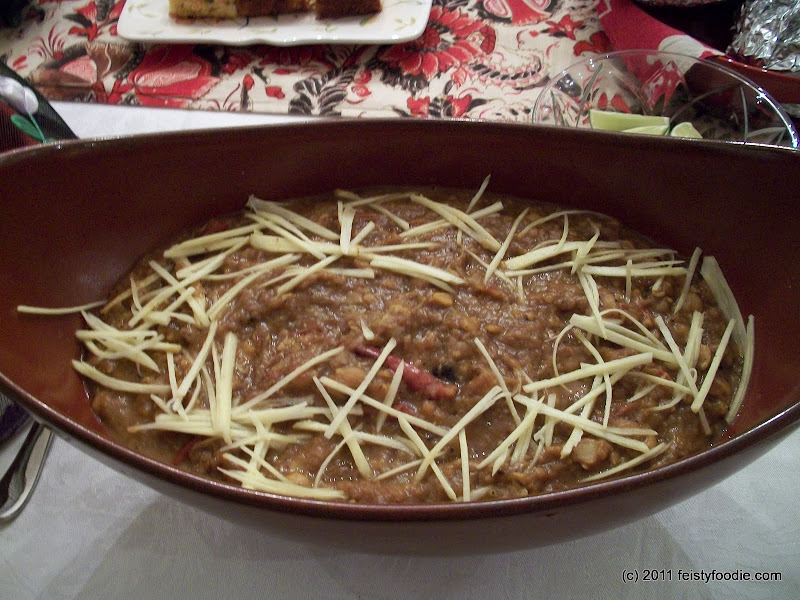 There was also a variety of naans available to help all the delicious food get in our bellies. Due to time constraints and the heat, we didn’t make naan in the tandoor. 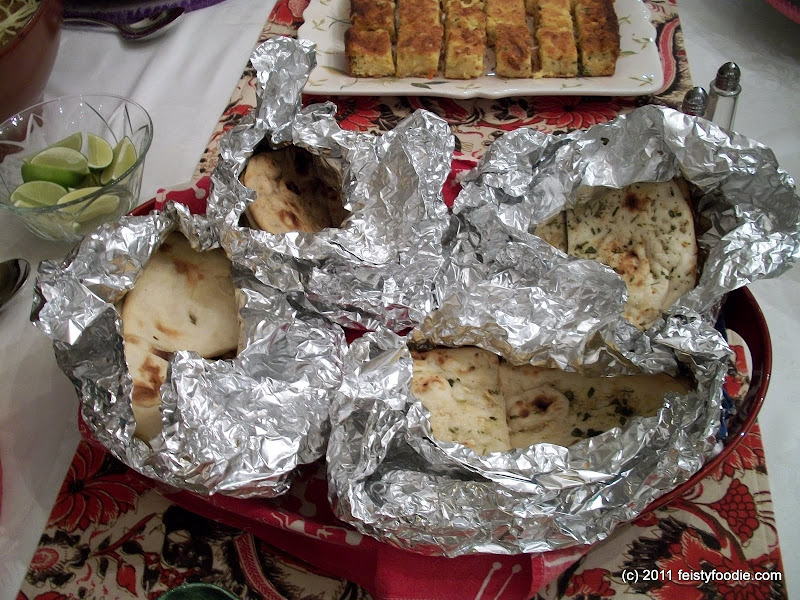 CT’s parents insisted that CT make the ribs she made for the Big Surf ‘N Turf Thank You dinner. CT allowed me to be her sous-chef as her Mom bought six racks of ribs. We used the same rub we made last time and slow cooked them in the oven for a few hours, making sure to baste them every 30 mins with barbeque sauce. Once they were tender, we finished them off on the grill for a nice char. We were both pretty happy that they turned out even better than last time. 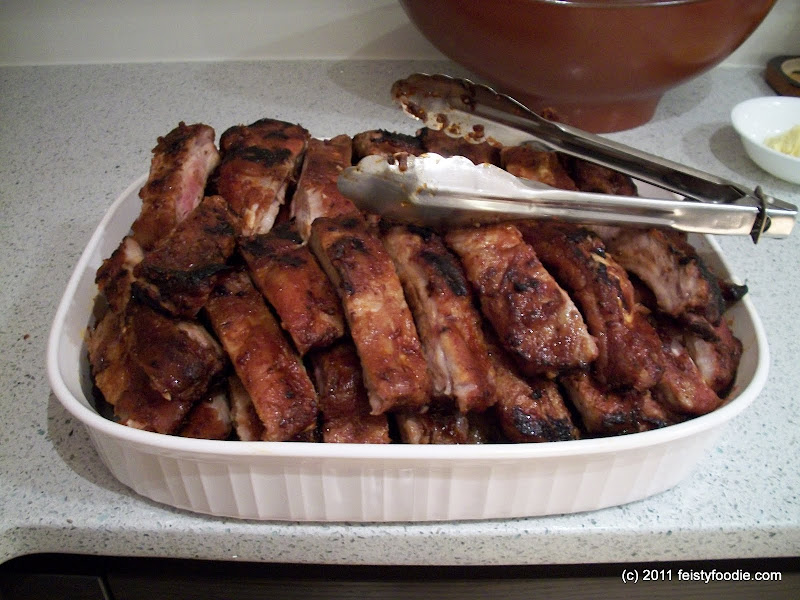 We all knew we were in for a treat because CT’s Dad was making his famous Raan. You may remember the last time he made it was back in the Fall for Indian Brunch. This time around he used two legs of lamb to feed the hungry masses. He cooked them on the grill this time since we were using the oven, but kept them wrapped in foil to braise rather than grill. The meat wasn’t gamey at all. Super tender and flavorful from yogurt and a variety of spices. Truly the star of the show. I did my best to clean the bones the next day to maximize the yummy leftovers. Now only to convince him to give me the recipe so I can make this at home… 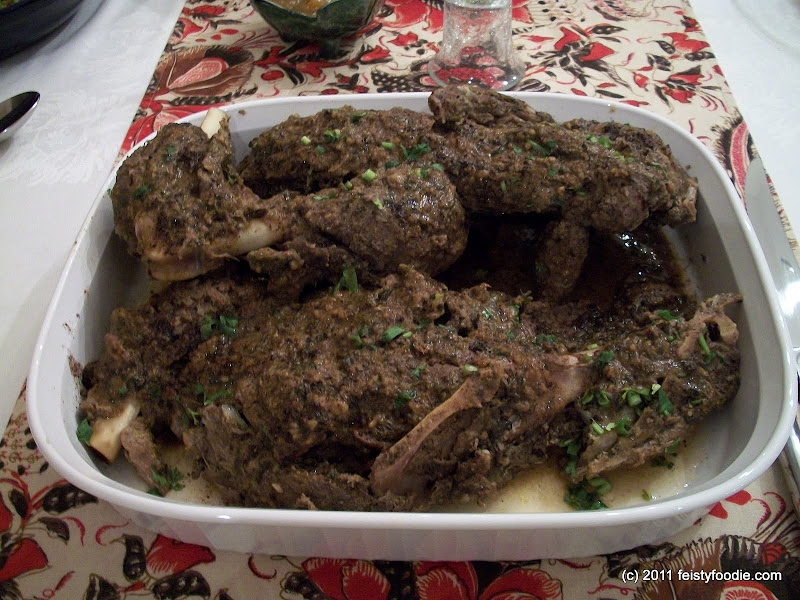 There was some fruit and a homemade mango mousse for dessert. This was not pictured because I was in a food coma and couldn’t move from my chair.

All in all, this was a fantastic party. All of the food turned out great and because CT’s Mom was in charge there was enough food for at least 3x the amount of people. Leftovers FTW! I will gladly trek to New Jersey for any of their future parties. Thanks to CT’s Parents for hosting us.