For the past couple summers, CT and I have spent a fair amount of time visiting Governors Island. While we have only gone for food festivals and the occasional concert, we had been meaning to go for a relaxing day including biking and maybe a picnic. Things happen and schedules fill up, so we didn’t get a day to go until a nice Saturday last month. CT had won a gift certificate to Water Taxi Beach when we went to the Guac-Off for Cancer last winter, so we also planned to check out the WTB location on the island.

Since we didn’t have a festival to go, we didn’t see the need to take the first ferry of the day at 10 am and arrived on the island a little before noon. We decided to eat first since WTB is right next to the ferry landing. The staff at WTB were super friendly so it wasn’t too difficult to redeem the gift certificate even though we were probably the first people to ever use one there. In addition to basically whatever and how much food we wanted, we were each allowed two beers. Since we planned on renting bikes, we only had one beer with lunch. The manager was cool with us getting the second beer later on in the day.

The beach was pretty large considering they had to truck in all that sand. They also have a stage setup for concerts. The view of southern Manhattan can’t be beat. 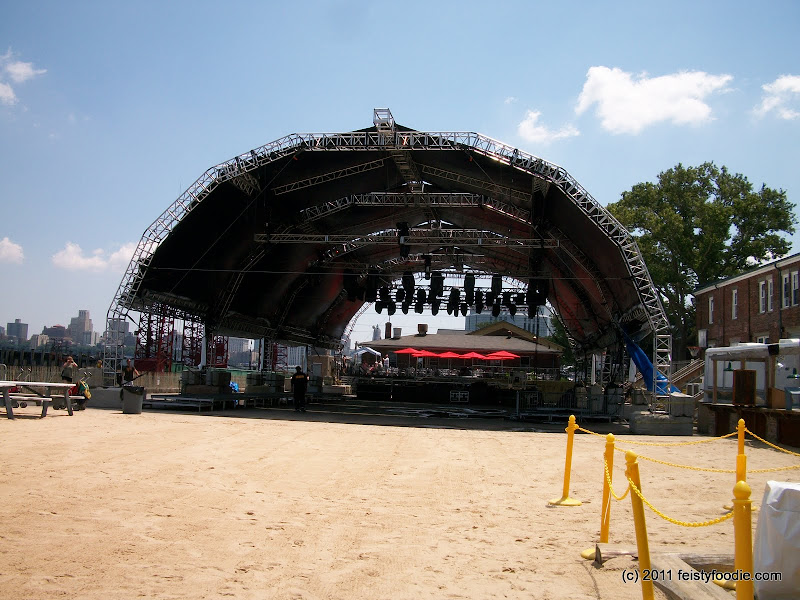 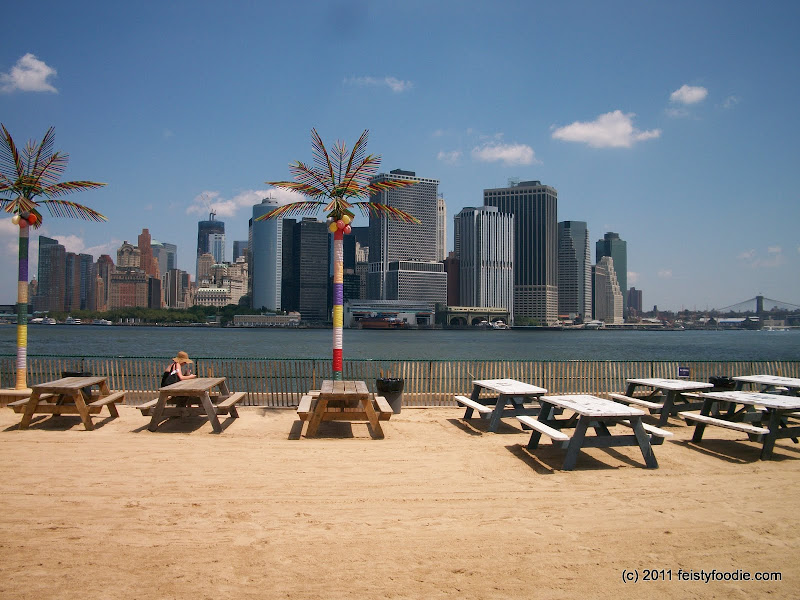 Water Taxi Beach has one stand for food and one for alcohol(under the tent). Note all alcohol must be consumed on the beach and you “can’t” bring your own to the island with you. 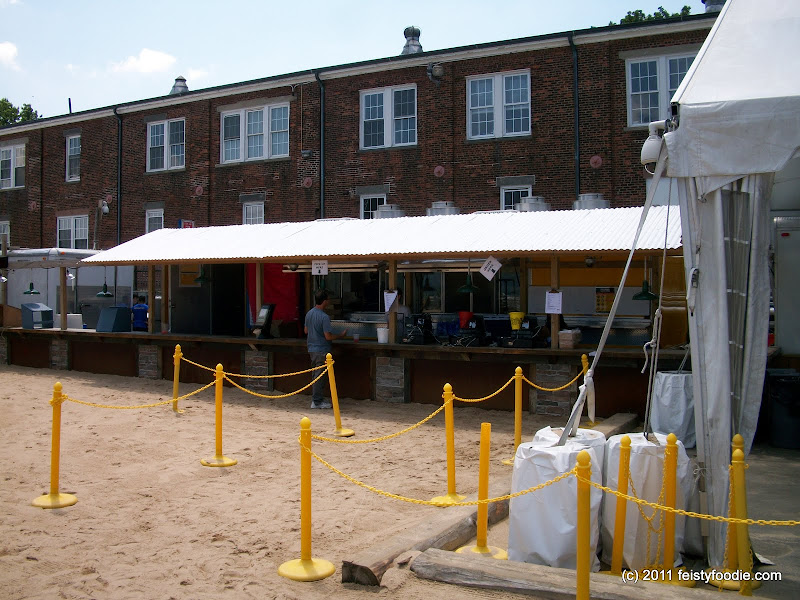 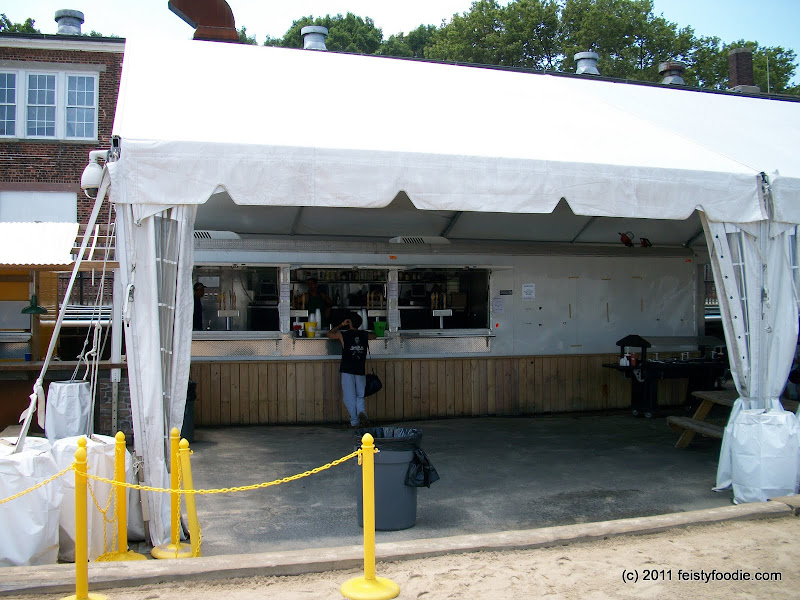 CT got the staff recommended cheeseburger($7). It was very good. The meat was properly seasoned and flavorful with a good crust from the griddle. 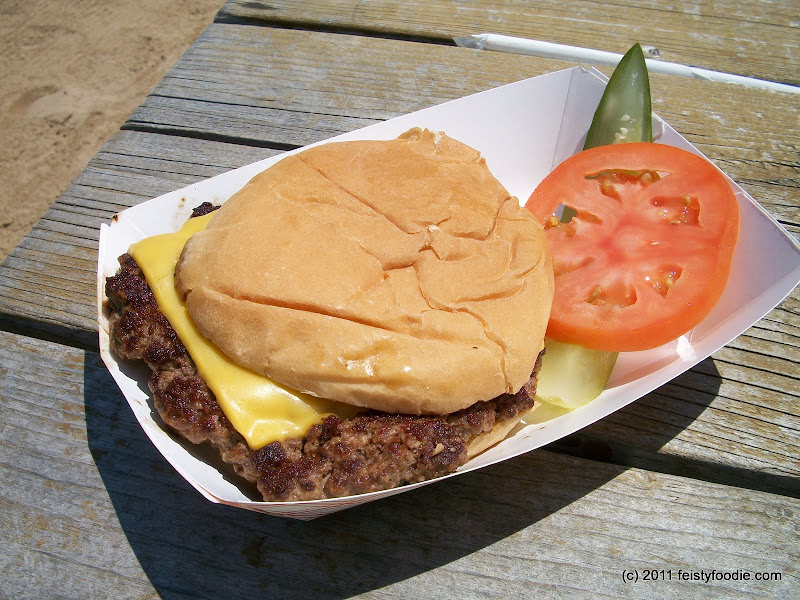 CT says: A very solid burger offering, juicy and delicious! I would definitely get it again.

I went with the chicken quesadilla($8). It was quite a large portion with a lot of chicken and a healthy size side of pico de gallo. I was very happy with it especially since the tortilla was crisp and held up to the fillings. Too many quesadillas fall apart when picked up thereby requiring the use of a fork and knife. 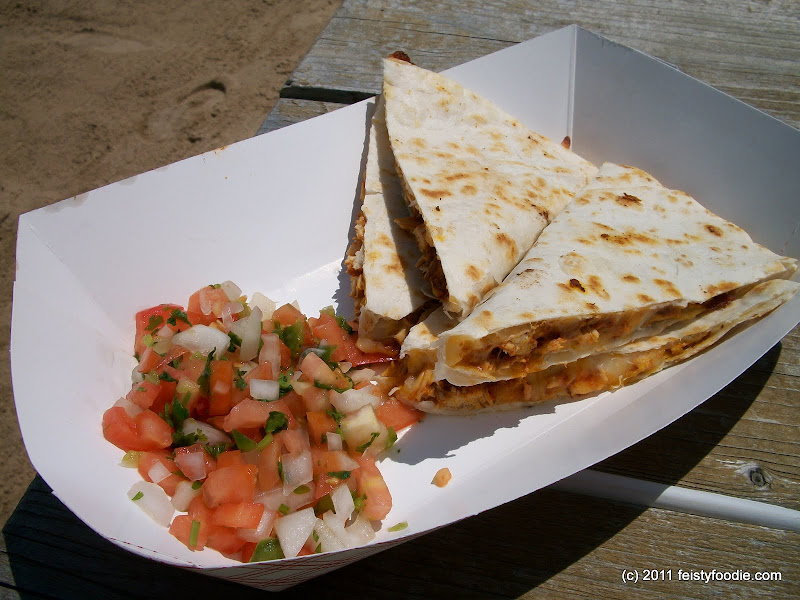 We shared a side of hand-cut Idaho fries($3) for good measure. The fries were perfectly cooked. Crispy on the outside and soft on the inside. I like skin-on fries a lot as they have more flavor. 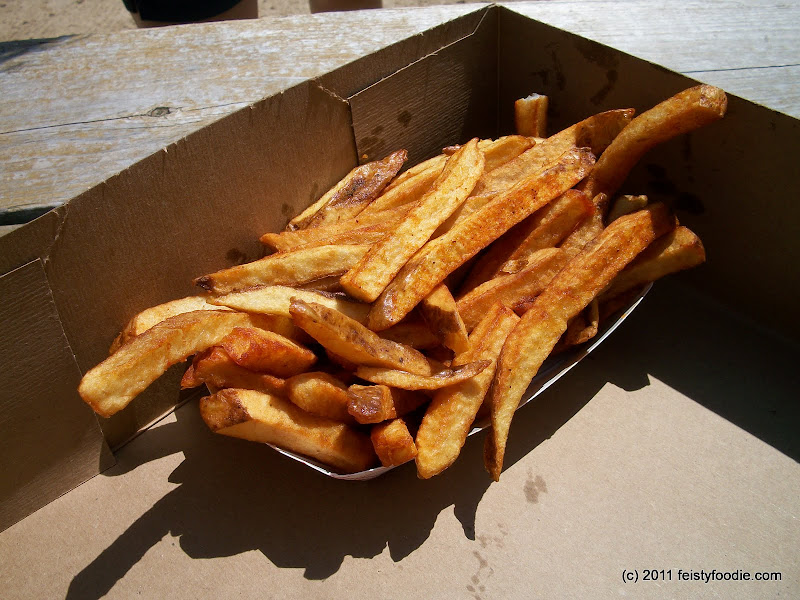 WTB also has…a FIXINGS BAR!!!!! This wasn’t some Roy Rogers ripoff. They had a ton of interesting sauces and toppings including: 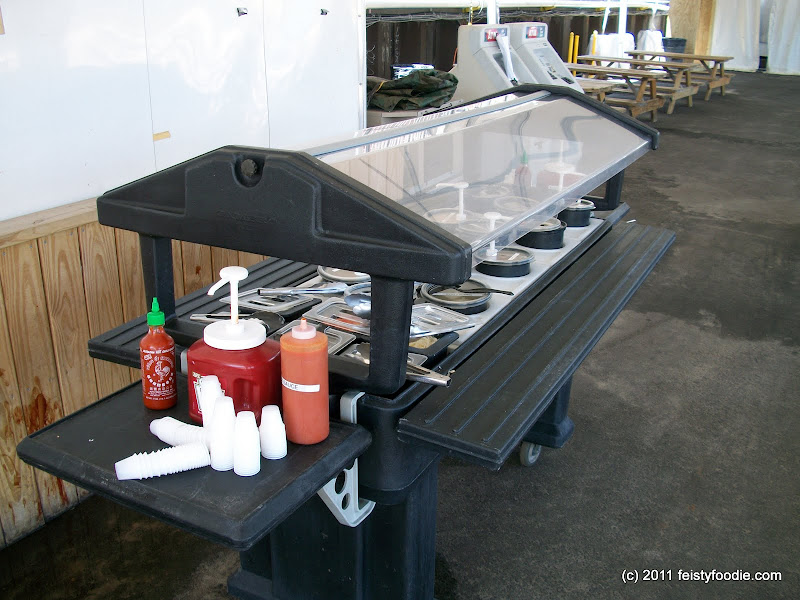 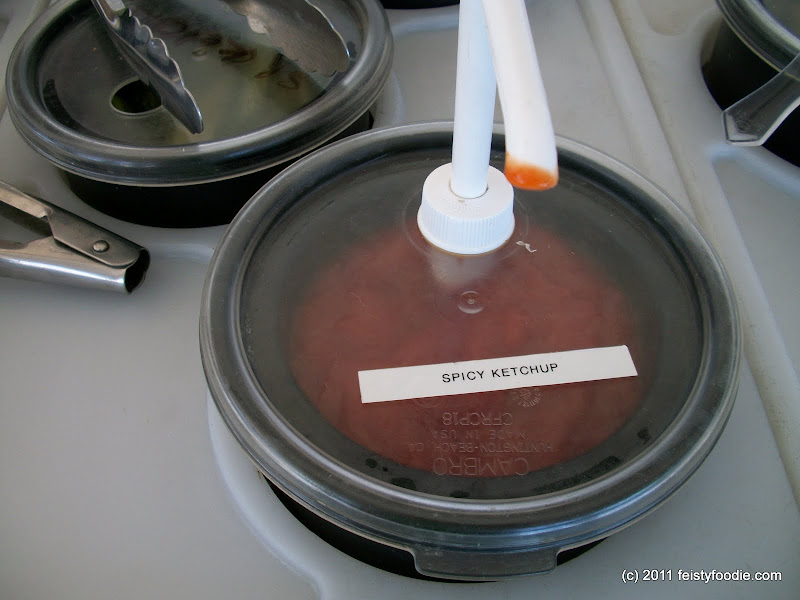 Spicy Pineapple Ketchup and “Salsa Mexican Sauce.” The pineapple ketchup was sweet with a bit of heat, but neither were overly so. The Mexican sauce was basically puréed pico de gallo. 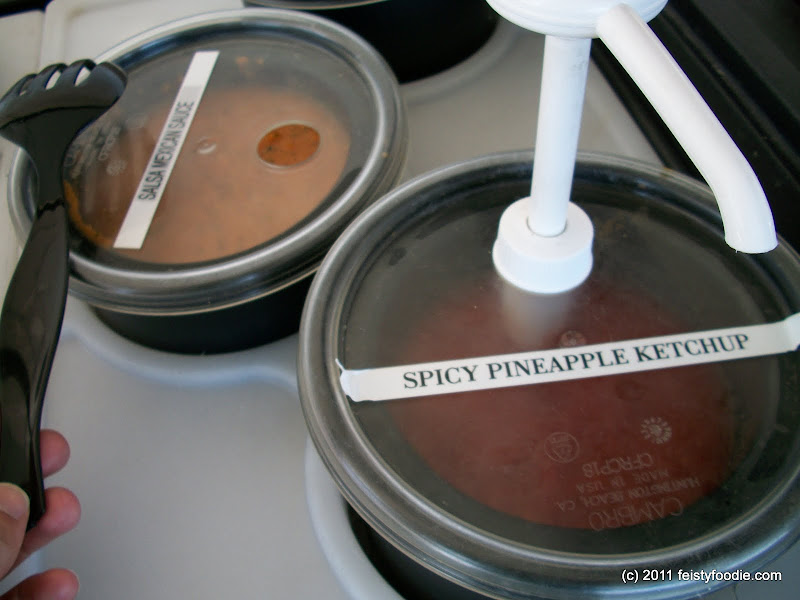 Half sour pickle spears. My favorite kind of pickle. 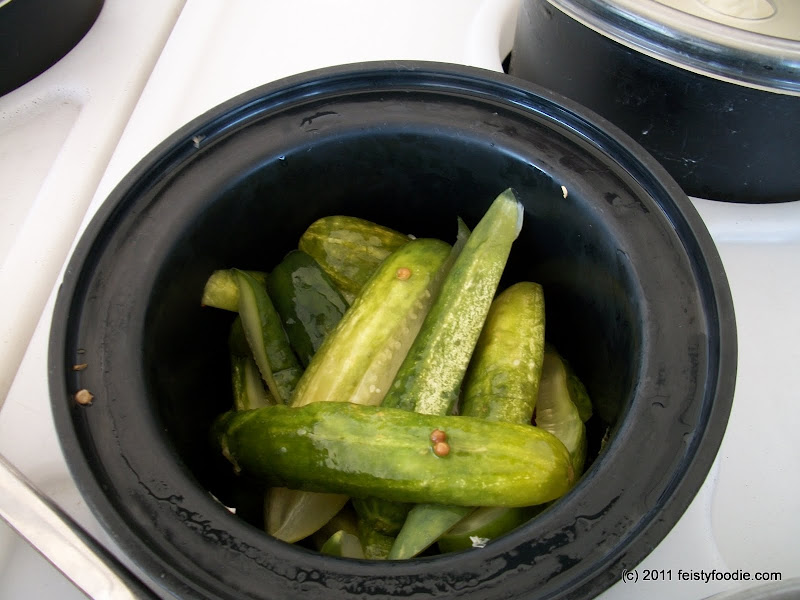 CT says: I loved this fixing bar! So many options… it was amazing! I could probably have made a meal out of it… not that I would, of course.

Check out the huge sailboat, Circle Line, and fishing boat that all passed by at the same time while we ate. 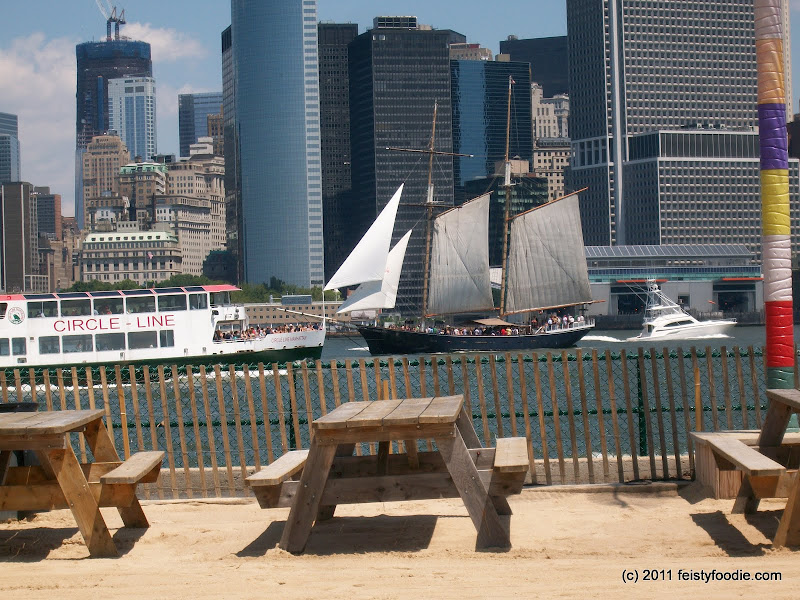 After lunch we went to rent bikes. Prices were pretty reasonable. $15 for 2 hours, $20 for 4 hours, and $25 for the day. All bikes have to be returned by 5:30 and you are simply charged for the amount of time you had them out. Helmets are free if you want one. We ended up having them for about four hours, so it only cost $5 per hour plus tax per bike. Pretty reasonable. I hadn’t rode a bike in years, but luckily I didn’t forget how…

It was great to be able to ride around the circumference of the entire island. I think it is about two miles. We were amazed by how much of the island we never saw before. 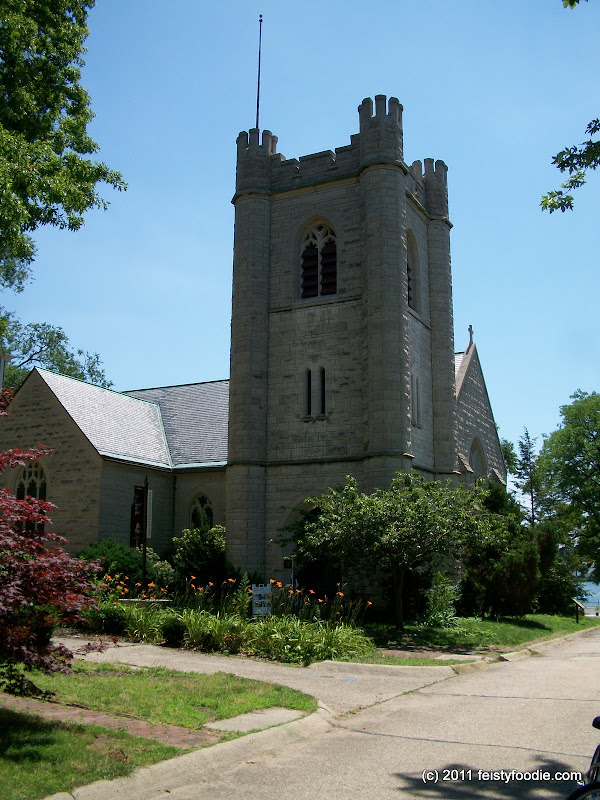 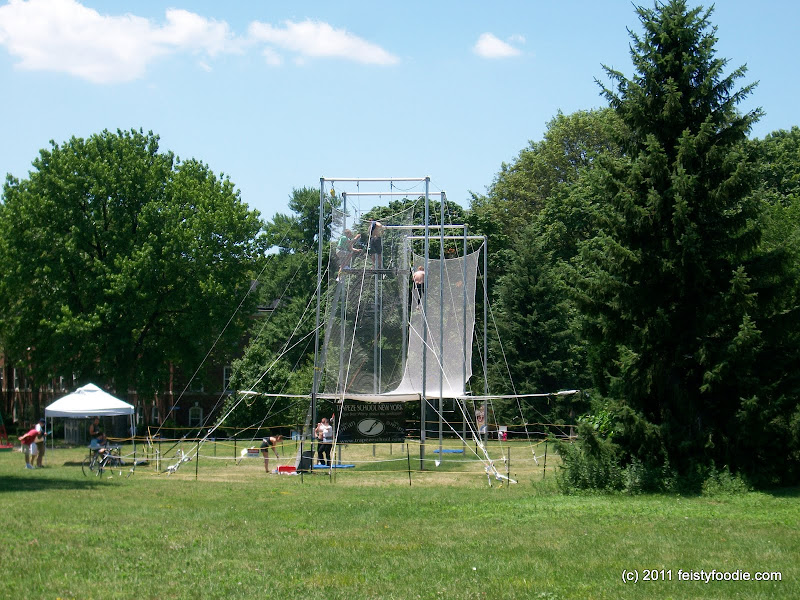 A new miniature golf course with different holes that we played last year at Meatopia. 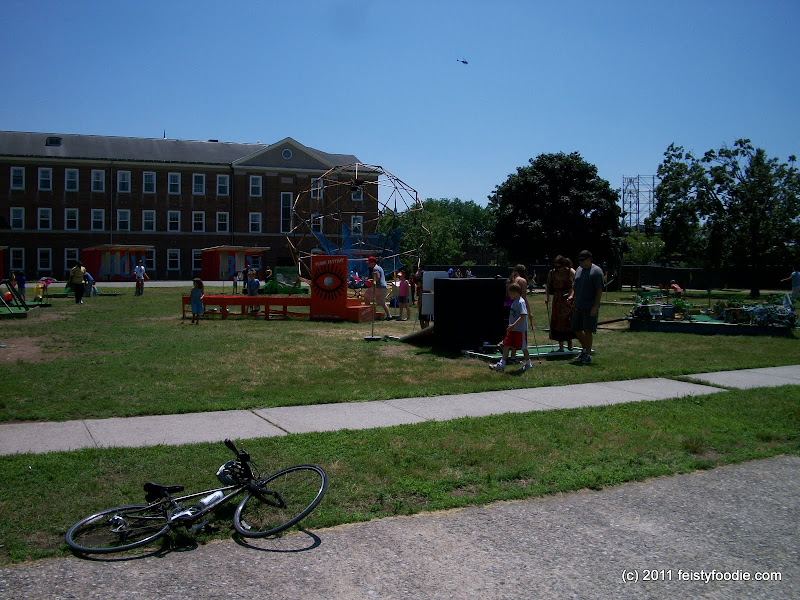 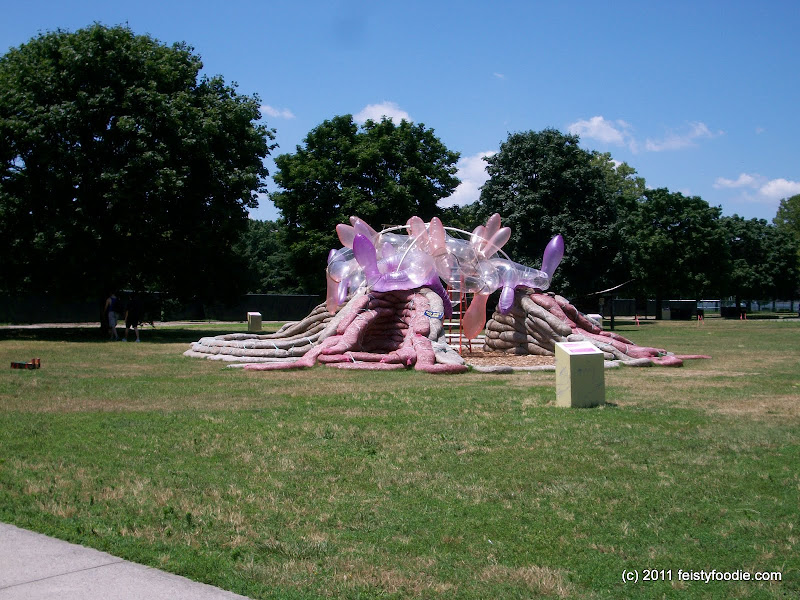 Next to the mini golf, a treehouse was built and anyone can go any paint it. (CT says: Except me… because somebody wouldn’t let me!) There were also a couple different DJs during the day playing house music. Quite a fun little place to hang out. 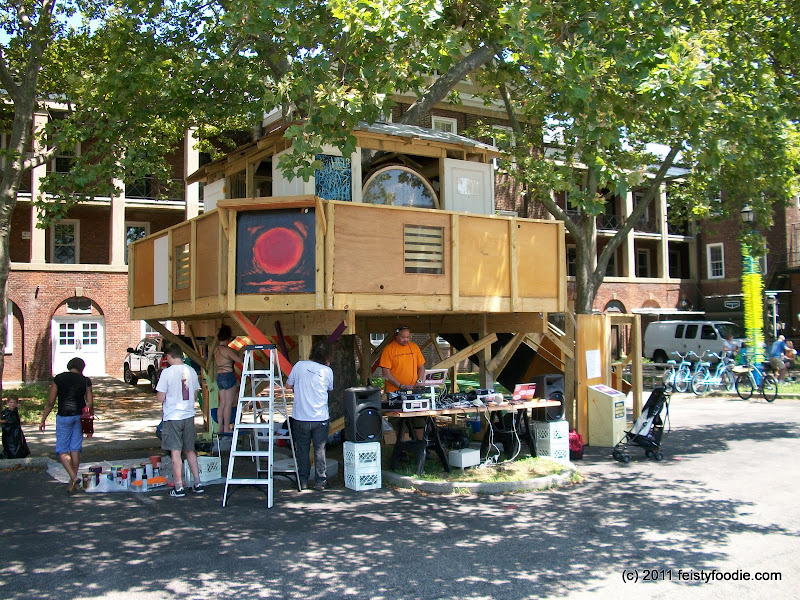 Governors Island also has its own theatre. 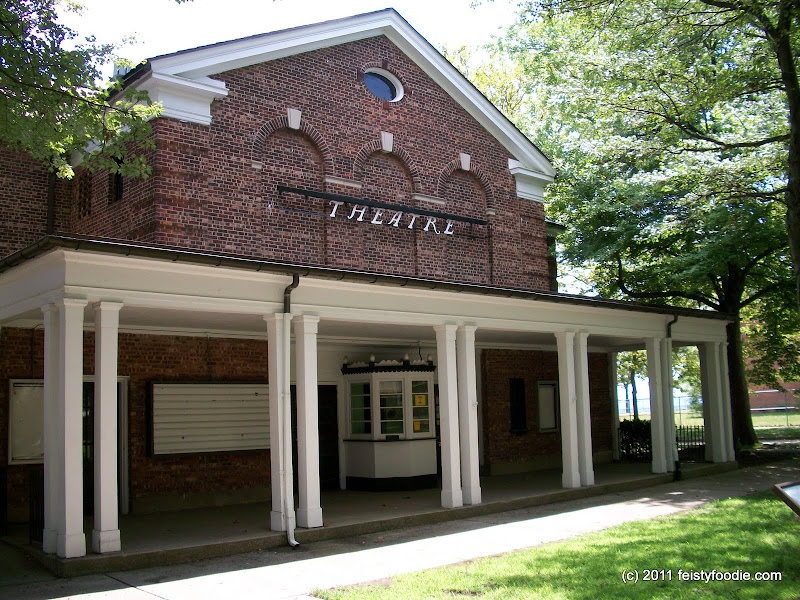 Some of the various steel art sculptures around the island. 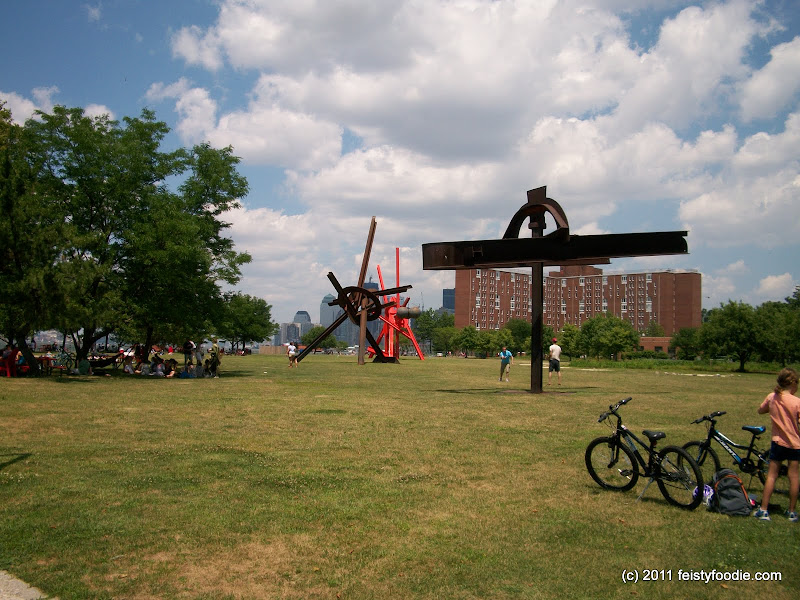 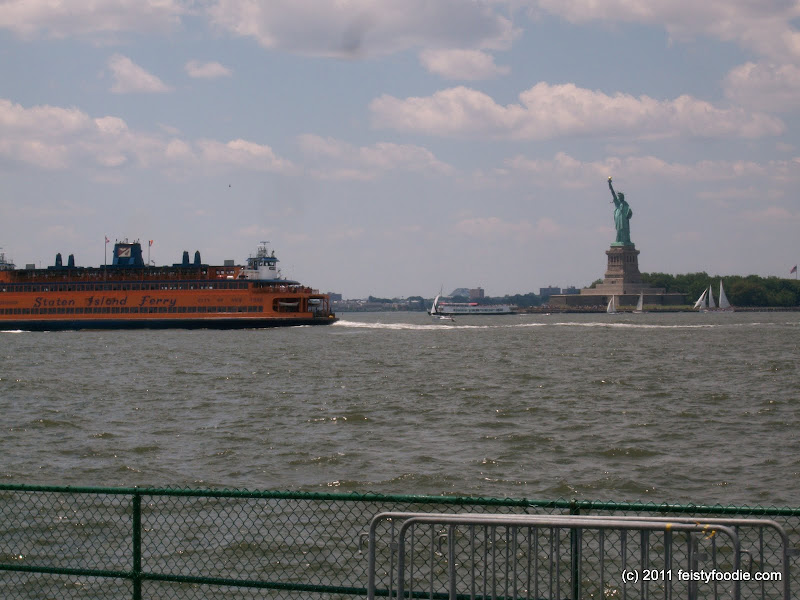 We took an ice cream break at a stand next to the mini golf. I got a Chipwich and CT got FrozeFruit. Each were $2.50. Super reasonably priced! 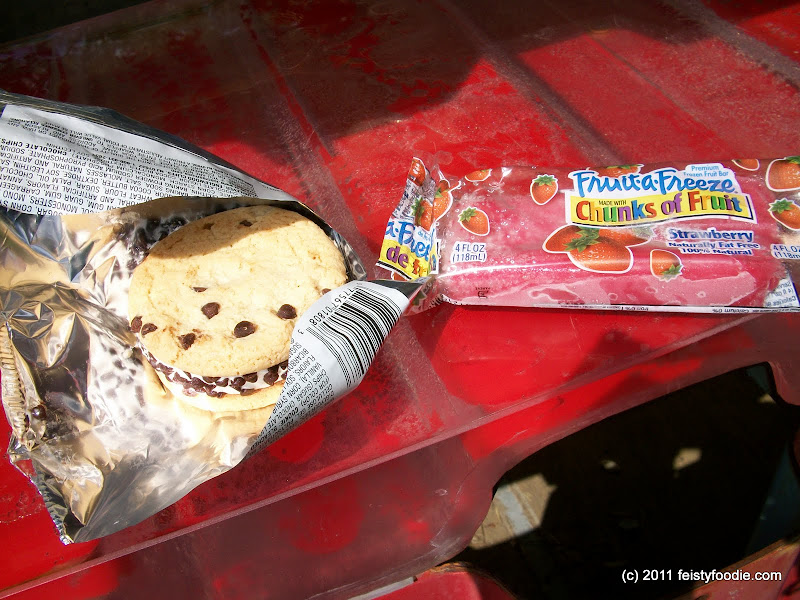 Governors Island even has its own Fire Department. Makes sense considering the vast number of buildings on the islands that could catch fire. 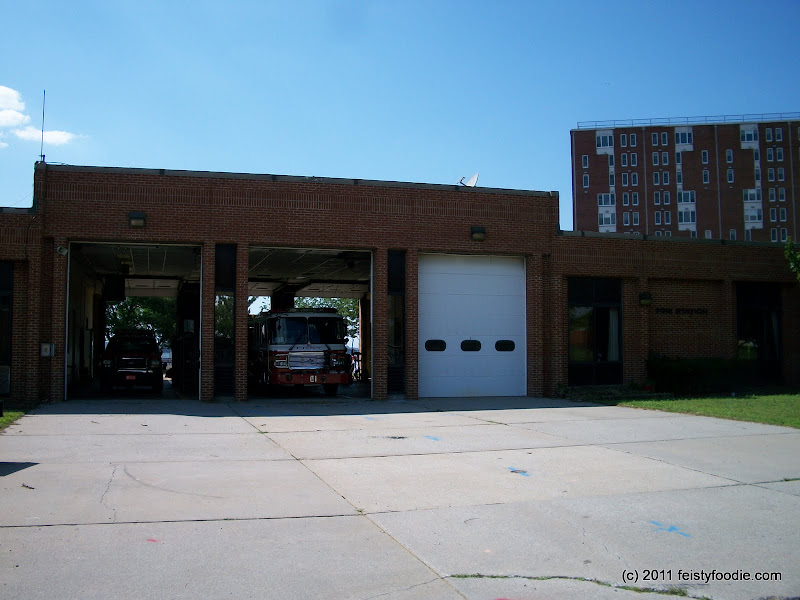 All in all, Water Taxi Beach was very good. Even though we had a gift certificate, I would gladly pay out of pocket next time as the food quality was high and the prices were reasonable especially considering we were on an island with only a few food options. CT and I had a great afternoon strolling around on our bikes and lazing on the grass. The island gets a fair amount of visitors each day its open, but is large enough for everyone to spread out. We will definitely return for another lazy weekend day.