A very long time ago, a friend of mine raved constantly about Yuka for all you can eat sushi.  I eventually made the trek, and posted about it, but the food blogger I was when I wrote that post and the food blogger I am now pretty much aren’t on speaking terms.  In fact, part of me sometimes looks at my early food writing and thinks I should go back and either rewrite everything or revisit places to get a better idea of what’s up – especially those places I review poorly – but the rest of me thinks “Yo, that part of me? You’re insane.”  In any case, a few weeks ago, I got a hankering for some all you can eat sushi, and remembered Yuka serving me well in the past.  So I trekked my way to the Upper East Side to see what was what. 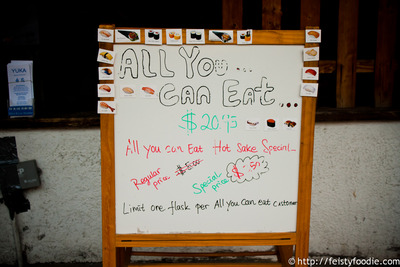 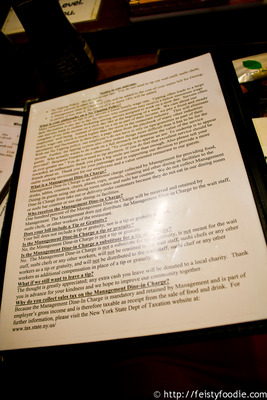 Oddly, the back of the menu goes on and on… and on about tipping be unnecesssary and unallowed.  I can understand ‘unnecessary’ – insomuch if they pay their servers enough, fine – but to declare it not even allowed seemed a bit excessive.  I shrugged it off, but I found it interesting and a bit weird that they dedicated that much space to saying “No tips, please.” Guess a lot of people ask why when they’re told that? 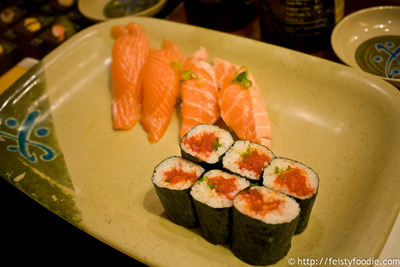 You’re given a card to mark off what you’d like – and I took a photo of each one before handing it over, but the pics seem uninteresting and solely for the purpose of remembering what we ordered – and the card is turned over to the adept sushi chefs. We actually wound up sitting at the bar, so I was able to watch our plates being made. First up: salmon, salmon tataki, and spicy tuna. Beer Boor had to go get cash since it turned out to be a cash-only establishment, so I took the liberty of ordering the first round for both of us.

The salmon was fresh, and the slices weren’t super thin with tons of rice, a problem I’ve had at some other all you can eat sushi places. The tataki, lightly cooked salmon, was also very tasty. Spicy tuna was ordered for Beer Boor as I’m not generally a fan, but I think he enjoyed it. 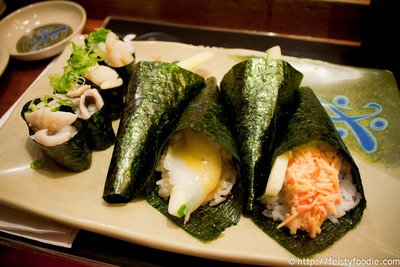 Also in our first round was my first mistake of the night. Trying to be ‘fair’ or nice or just trying for symmetry (I have weird quirks when it comes to numbers of things), I ordered two each of the crab salad hand roll and the squid and soya bean paste hand roll (it sounded interesting!).  I like those things, but I totally forgot that Beer Boor isn’t too fond of certain types of seafood – including squid. 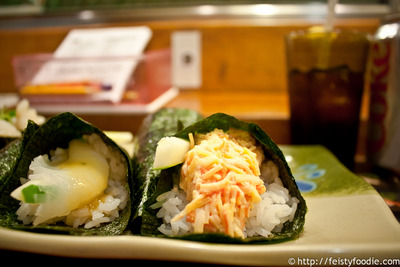 I also ordered the crab salad hand roll, which I recalled liking from rereading my last post before I came. It was moist, fluffy, and tasted like crab lightly tossed with some sort of sauce to keep it moist, and a slice of cucumber in it for good measure. I’m not sure what makes the crab this color – even kani (imitation crab that’s found in California rolls here in NYC) isn’t all uniformly that color – but it tasted good. Well, I liked it, anyway.  It was very well seasoned, with a lot of ‘juiciness’ to it – it wasn’t dry by any means, and the rice served as a nice carb vehicle for it. 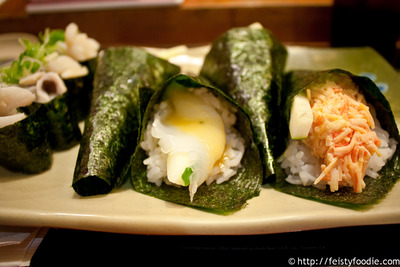 As for the squid & soy hand roll, it was interesting, but not something I’d want to order again. The squid was a little too chewy for me in this format. 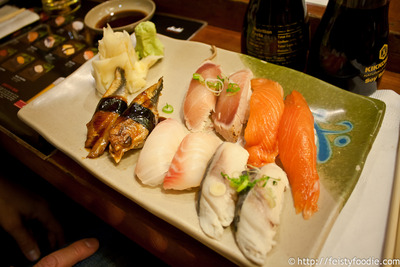 Our next plate was focused more on sushi. Two pieces of eel, two pieces of salmon, two piece of white fish, two pieces of tuna tataki, and two pieces of mackerel.  Again, the fish was fresh, and they didn’t load us up on rice while skimping on the fish, something I appreciated greatly. 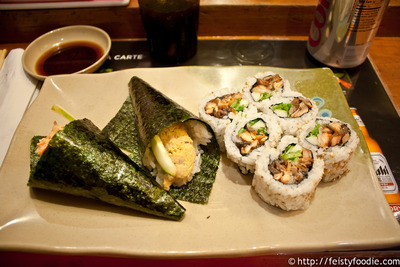 Next up, I returned to the crab salad hand roll, while Beer Boor decided to try his luck with the tuna salad hand roll. I warned him but he said “They wouldn’t… would they?” And yep, they did: basically cat food in a hand roll. Awful. The roll was salmon skin, which was pretty tasty – crisp pieces of salmon skin stuffed into an inside out roll. 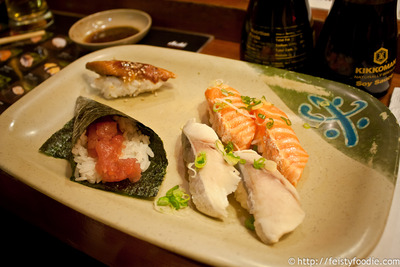 For our final round, we returned to the salmon tatatki, I got a piece of eel nigiri, we each had a piece of mackerel, and Beer Boor got a regular tuna hand roll.  I think at this point we were both completely stuffed, happy, and ready to call it quits.

Yvo says: For $20.95 each, we both walked away very satisfied and stuffed with lots of yummy sushi.  It’s true that the sushi menu that’s included for the all you can eat is rather simple and unexciting, but the pieces are well-executed, they don’t try to skimp you on fish or fill you up on rice, and the place is has a nice laidback vibe.  I would definitely come here again and be happy with dinner!  (There are rolls you can order for an up-charge, but we decided not to do that in order to embrace the spirit of all you can eat sushi!)
recommended