For Father’s Day this year, CT’s Dad decided he wanted some upscale Mexican food, so we ended up at Yerba Buena Perry in the West Village. I had heard of it and its sister restaurant in the East Village before, but have never been. The menu looked delicious, so I was pretty excited to try it.

Some of us were pretty excited for the brunch deal they offer; $12 for one hour of unlimited cocktails. Although, they only offered a selection of about six different cocktails including sangria, mimosas, etc. CT and I both ended up getting a Pisco cocktail with guava and lemon juice. The guava was pretty sweet, but toned down by the lemon juice. It ended up being a great deal considering we had three drinks during that hour. 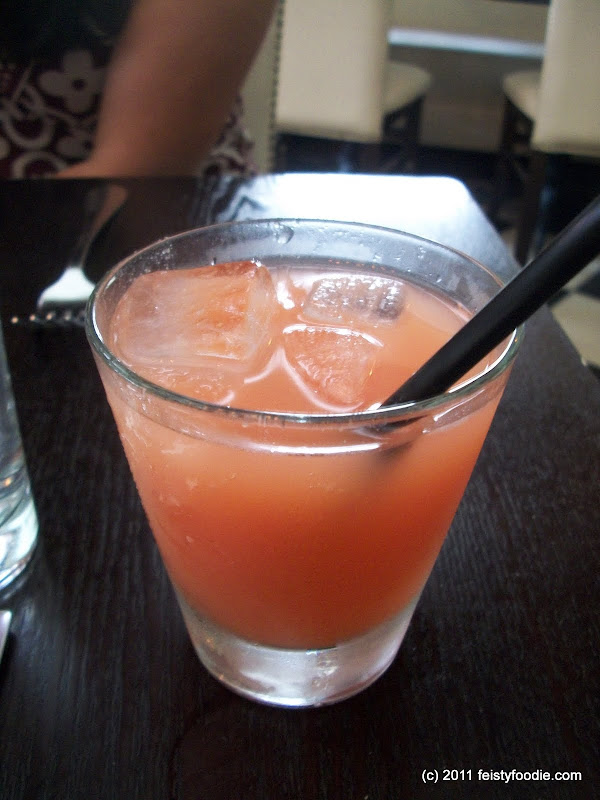 CT says: I loved the pisco – not too sweet or strong but a flavor that went well with the meal. I didn’t try anyone else’s drink, but they all seemed to really enjoy theirs too. It was really a fantastic deal.

Croquetes De Queijo (manchego cheese croquettes and pickled jalapeño salsa verde). These little bites were really good. They tasted exactly like the frozen mozzarella sticks you get a bar, which wasn’t necessarily a bad thing. The salsa verde was a good accompaniment. CT’s Dad really loved the sauce. Not only did he ask for another bowl of it, I am pretty sure he licked the bowl clean. No judgment, ha. 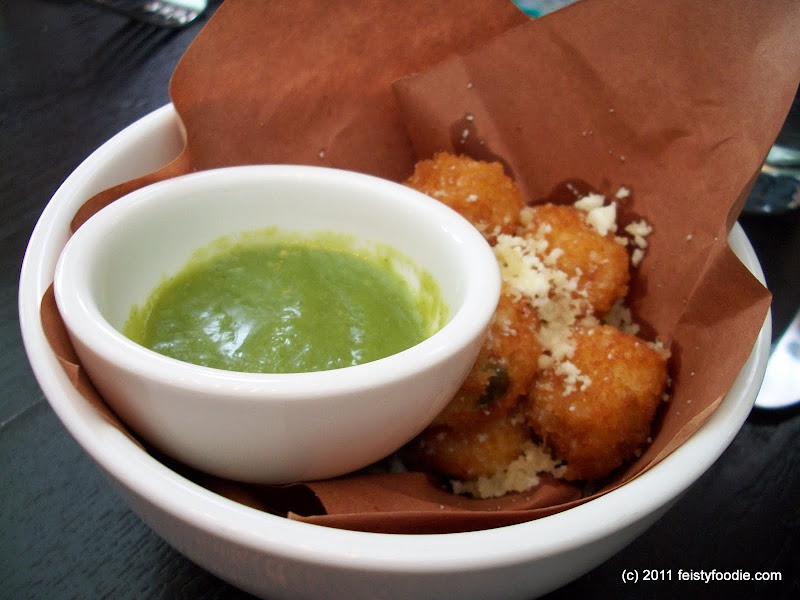 CT says: I thought these were ok; pretty greasy though. I would eat these again if ordered, but I probably wouldn’t order them again myself. The sauce was excellent though! Fresh tasting and spicy!

I don’t think people are legally allowed to go eat Mexican food without ordering guacamole. I for one am not about the break the law. This version had chunky avocado, chipotle, red onion and topped with queso fresco. I was a bit taken aback when this was presented to us because the guac was BROWN! Were they serving avocados that got too oxidized? I believe the brown was from the chipotle because the guac was delicious. 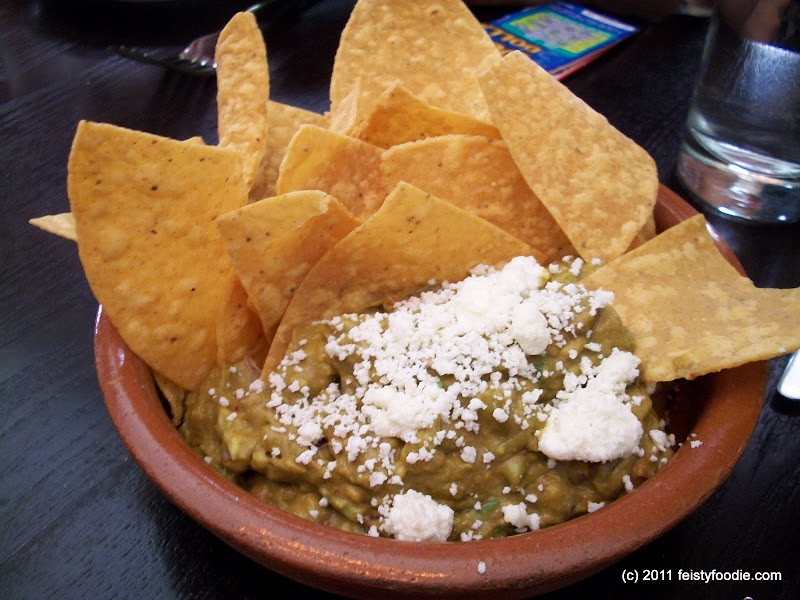 CT says: Standard fresh guac, but elevated by the chipotle. I think I’ll start using chipotle sauce in my guacamole too. It wasn’t too spicy but gave a little kick to the back of your throat.

We also ordered the “Trio of Fries” to share with our meal. I bet you think the trio consists of potato, sweet potato, and maybe waffle? Not even close. It was avocado, WATERMELON and hearts of palm in fry-form. I don’t think anyone in their right mind could see watermelon fries on a menu and NOT order them. All of the “fries” were very lightly battered, so you could still tell what you were eating. The watermelon was juicy and its flavor enhanced by the frying. The whole slices of avocado were good and the hearts of palm were ok. I would be interested to see how they cook the watermelon because with such a high water content, it must be a little scary to deep fry. 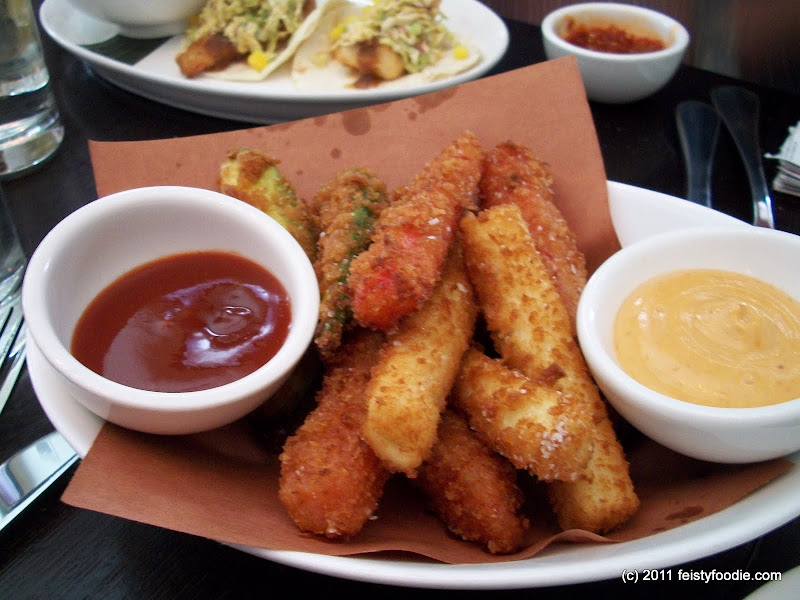 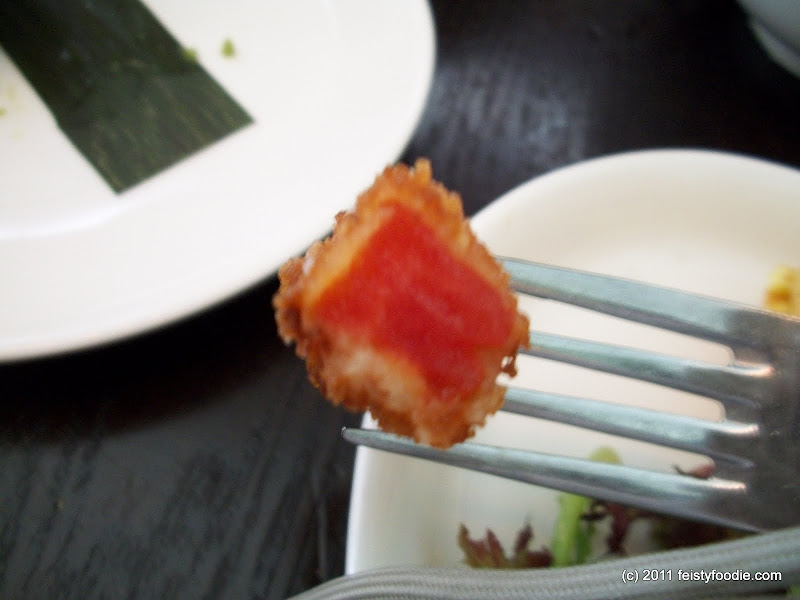 CT says: I had been to the East Village location once and love these fries there, so I insisted on ordering them today. The watermelon was definitely my favorite, but they are all worth trying. This is a must order for everyone.

For our meal, CT and I both gravitated to the fish tacos. It would have been really boring for us to get the same thing, so I let her order it. Luckily the menu had a couple other dishes that caught my eye.

Tacos De Pescado (crispy tilapia baja style, jicama cabbage chipotle slaw, rice & beans). Unfortunately, my camera decided to not listen to me so I wasn’t able to get a good shot. The addition of chopped mango on top lightened up the fried fish. The tacos only had one tortilla which automatically takes a half-star off its Yelp review. Fortunately, the tortilla held up. I would order this myself next time. 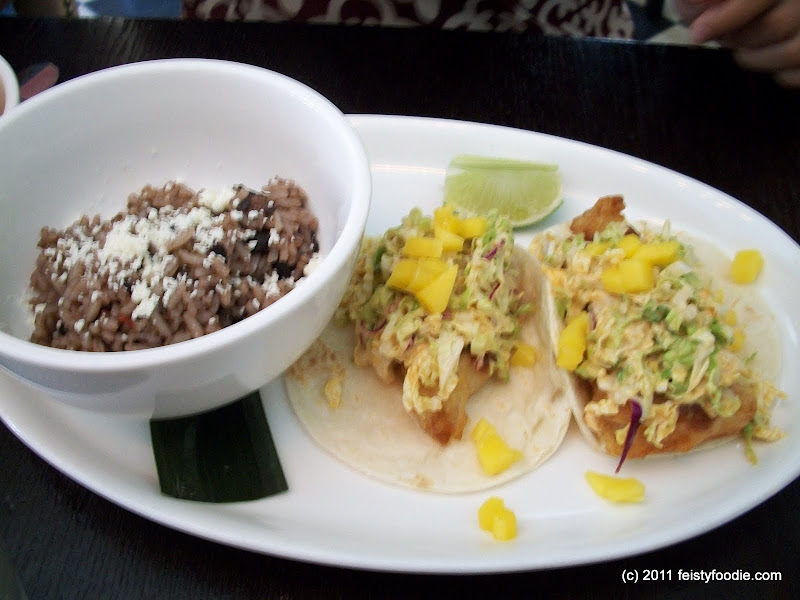 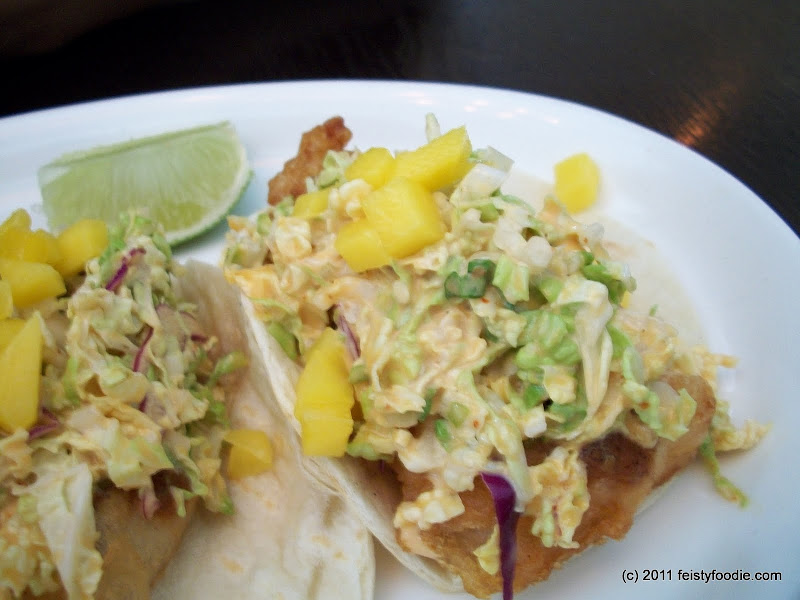 CT says: Thanks TT! I really enjoyed these. Such a light yet super flavorful meal. Everything was fresh and the fish wasn’t greasy. I could probably have eaten 10 of these tacos. The rice and beans wasn’t anything special but a filling accompaniment. Even better with the green sauce mixed in.

Arepas (filled with chicken tinga, scrambled eggs, avocado queso fresco). I have enjoyed arepas even since the Taste of 7th Street last year. http://feistyfoodie.com/2010/03/30/taste-of-7th/ Unfortunately, I have made a poor effort of satisfying my arepas craving. This made for a worthy second choice on the menu. The arepa itself was nice and crunchy. The chicken was quite juicy, so much so that a pool quickly formed in my plate while chomping down. The eggs, avocado and cheese worked well with the chicken. I think for the price($12) there should have been three arepas especially since I got a meager salad instead of rice & beans like CT. 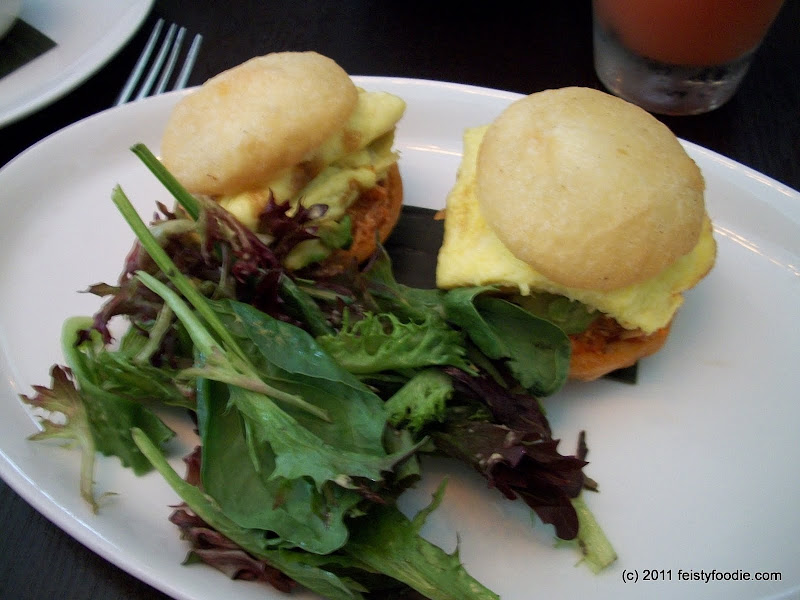 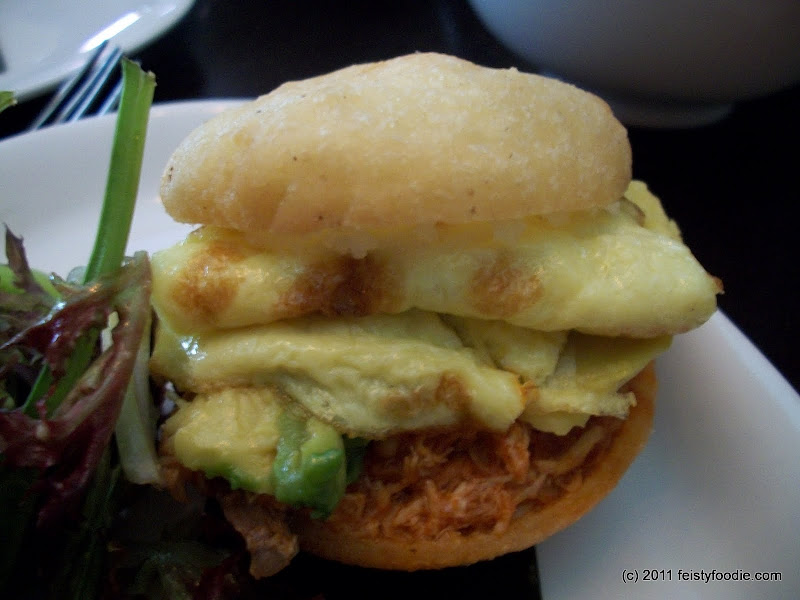 We all decided to share a dessert, Churros con Chocolate (Mexican Hot Chocolate and cinnamon dusted churros). I didn’t have any as I was quite full after finishing off CT’s leftovers, so she’ll have to tell you how it was. 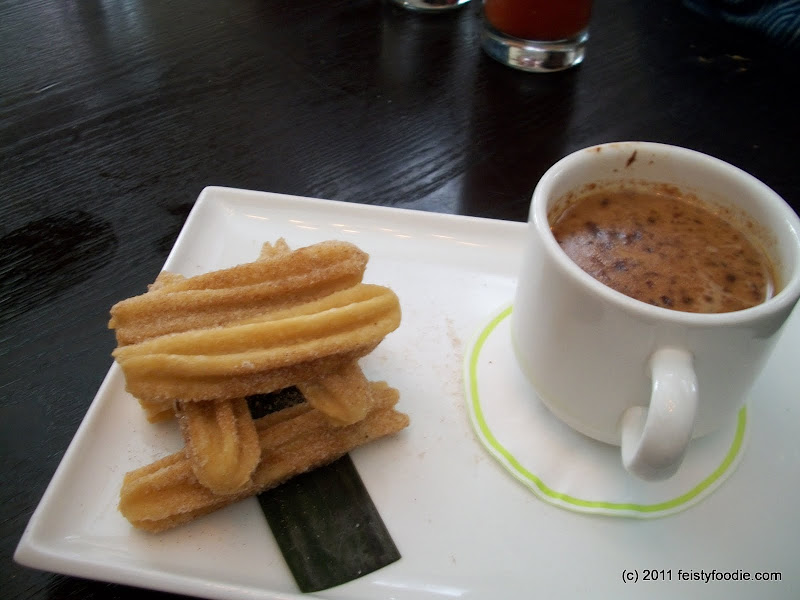 CT says: The churros themselves were great, crunchy yet soft, and not greasy at all. Just fantastic. Unfortunately, I couldn’t say the same about the hot chocolate. Hot chocolate, when served with churros, should be thick and rich for dipping. However, this seemed like a package of Swiss-Miss mixed with hot water. Now I like Swiss Miss with marshmallows on a cold winters night, but this was not the place for it. Oh well, I just continued to munch on the churros alone.

All in all, Yerba Buena Perry did a great brunch. The cocktail deal was quite worth it as long as you prepared to get a little drunk. CT’s Dad was very happy with the meal which was the most important thing on Father’s Day. Considering the amount of food and drinks we got, it ended up being around $200 for six people, which wasn’t outrageous. Thanks to CT & ML for treating us. I look forward to returning perhaps for dinner next time for some more delicious food.