For the past couple of weeks, CT and I have been looking forward to doing some home-cooking together(yes, you can all collectively “awww” now). She mentioned that it was soft shell crabs season and wanted to take another shot at cooking them since her delicious sandwiches last Spring. CT also has been wanting to take a shot at making ribs. Since we did owe CT’s Dad a dinner for his enthusiastic help in moving her things, we decided to make BOTH! Since we were making such a feast, Aunt B and Scout were also invited since she was in need of some good home-cooking. Our first dinner party at the apartment!

CT says: Ever since the FBM’s AYCE extravaganza at RUB which I missed, I’ve been dying for some ribs and thought, why not just make them myself? It can’t be that difficult, can it? (Oh and let’s not forget my Mom was also invited, for her mental-support during the move while she was out of the country.)

First some hors d’oeuvres to go with the champagne CT’s parents gave us when she first moved in. 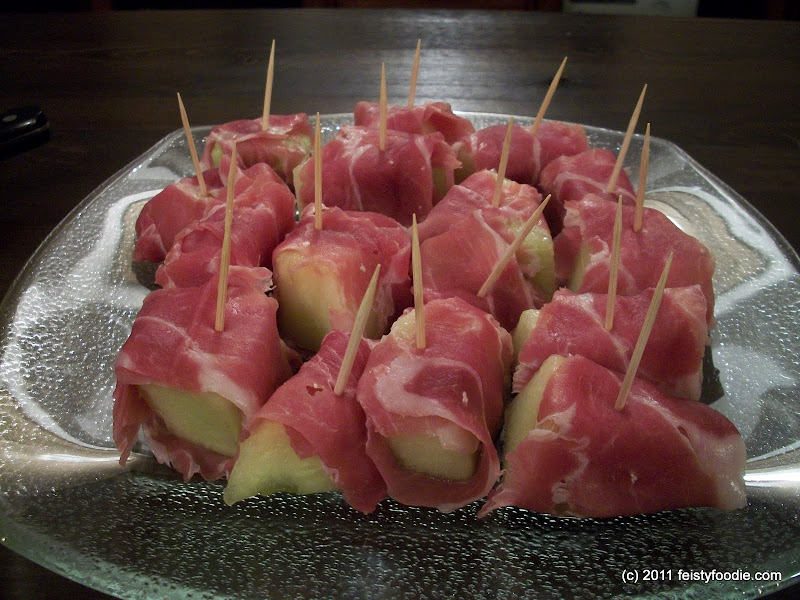 Prosciutto di Parma wrapped honeydew. When I was at my favorite butcher, Esposito’s, I debated for a minute on whether to get the domestic prosciutto or the real thing “di Parma.” My head must have been foggy from the early hour since I actually considered getting the domestic. The melon was perfectly ripe so its sweetness was perfect with the saltiness of the ham. So easy to make, yet so good. 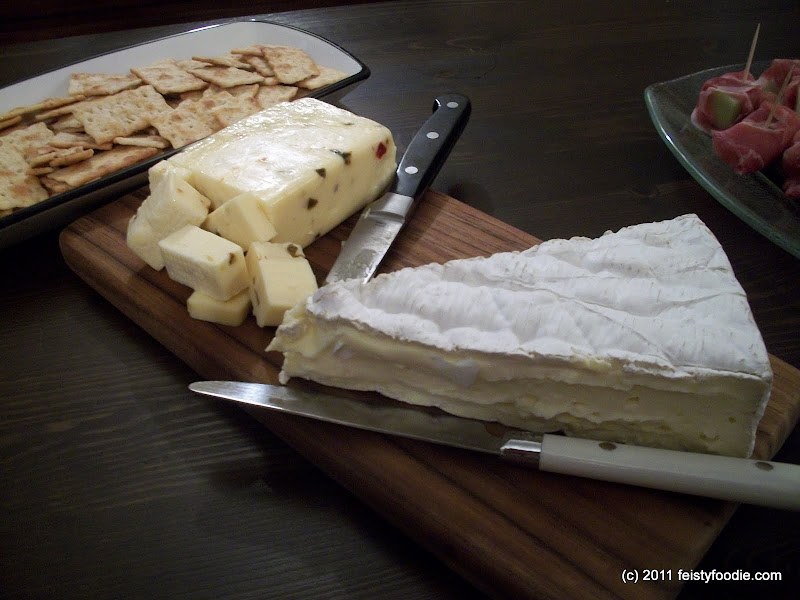 We also got two cheeses; Pepperjack and Brie. The brie was salty and gooey as it should be. I can’t believe I used to scrunch my nose at this wonderful cheese. 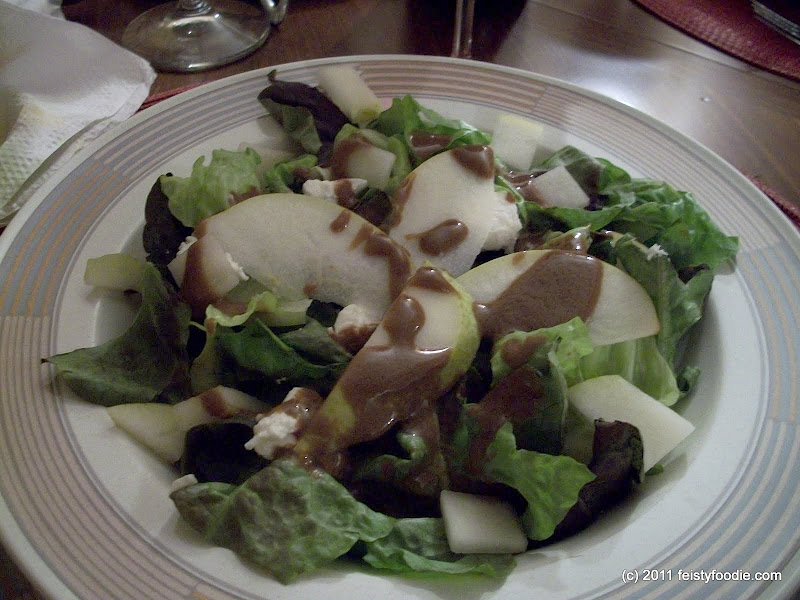 Once we sat down at the table, we started with a salad of red leaf lettuce, toasted walnuts, pears and goat cheese drizzled with homemade balsamic vinaigrette. This was a great salad with its multitude of flavors and textures. It was a good “healthy” base to the impending feast. 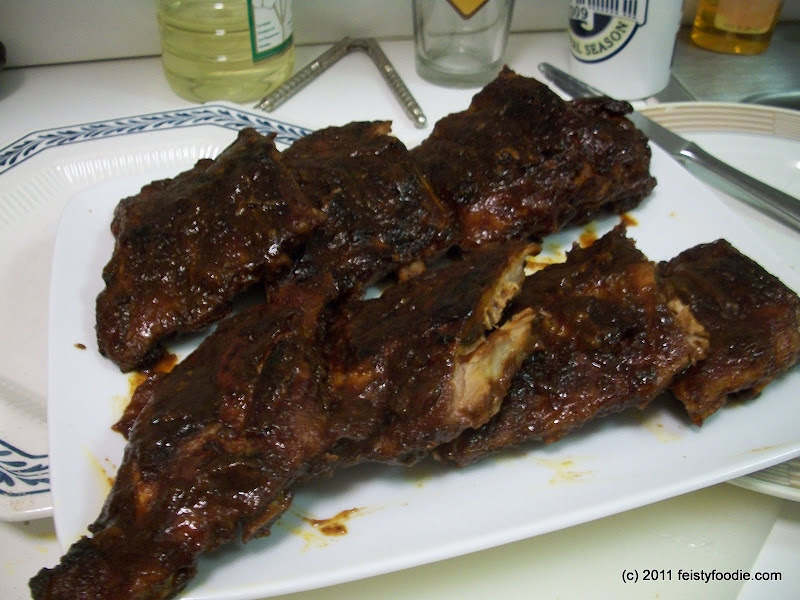 Two racks of baby backs. CT made her own spice blend that featured some spicy paprika CT’s parents recently brought back from their trip to Hungary. I was used to sweet paprika that was used more for color rather than flavor. Boy was this SPICY! Since not everyone likes spicy foods, CT was smart to plan ahead and make two different rubs so one rack would be less spicy. I helped her out by jazzing up some bottled barbeque sauce with spices and sauces. It really makes a different to improve upon what you buy from the store, just like with spaghetti sauce. For CT’s first time making ribs in the oven, she did a great job especially since they were a lot more time consuming than the crabs.

CT says: After reading numerous recipes online, I decided to do both a rub and a sauce since I was oven baking these and wanted to get the most possible flavor! I used the Hungarian spicy paprika in one and regular sweet paprika in the other. I should have taken a picture of the uncooked rubbed racks, because the vast difference in colors were amazing. With all the excitement and time crunch, I wasn’t quite thinking straight and forgot to taste the rubs before putting them on – boy was that Hungarian paprika spicy! But incredibly delicious too! After leaving the rub on for a few hours, I covered the ribs with our jazzed-up bbq sauce, tented with foil and popped them in the oven – about 225-250 for 2.5-3 hours, basting every half hour or so. Right before serving, I coated the ribs one last time in all the thick gooey sauce from the bottom of the pan and into the broiler for a couple minutes to seal the flavor. Unfortunately, because we were running a bit late, I ended up keeping the ribs in longer than planned and they got a little overcooked. They were still tender and very flavorful (if I do say so myself!), but next time I’ll be sure to take them out on time, and let the last-minute broiler action re-heat them if necessary. 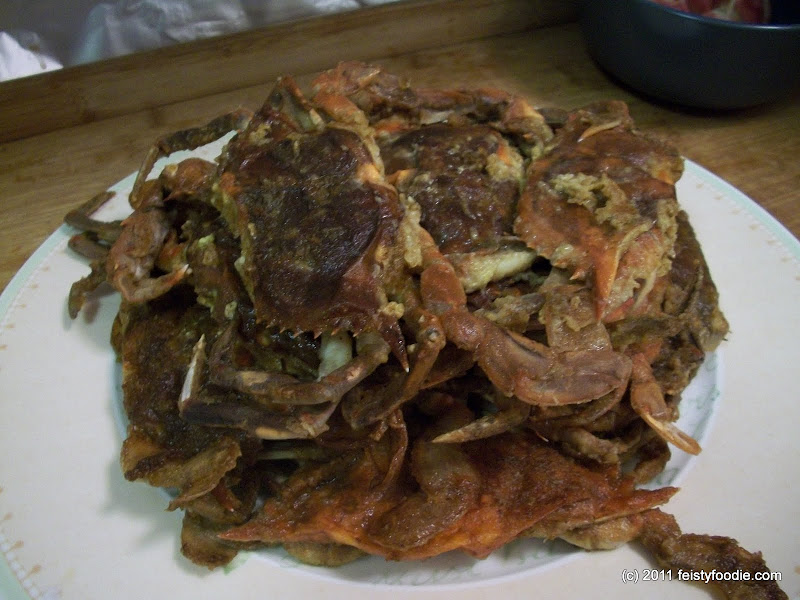 I took responsibility for the soft shell crabs. We bought them live earlier in the day, so I had the fun task of cleaning them. This involved not only cutting the face off, but also removing the lungs and the “apron.” I have been a proud eater of all animals my whole life but all of this death was almost too much with ten crabs to clean. After that was done, I simply mixed some regular flour with a lot of seasonings which was used to lightly coat the crabs. The crabs were then simply pan-fried in some canola oil. Apart from some parts of the crabs popping apart when the water inside them boiled, it wasn’t too difficult to cook. The crabs turned out great! Everyone loved them. They were also so much easier to eat than the last time I had crabs. It was easy to forget that both meals were the same species of crab. One simply recently molted its hard shell.

CT says: Though I was very willing to help with the cleaning of the crabs, I was still happy that TT took the lead on this and was very impressed! Even more impressive was the end result – the crabs came out nice and crispy on the outside while still very juicy on the inside. Delicious! 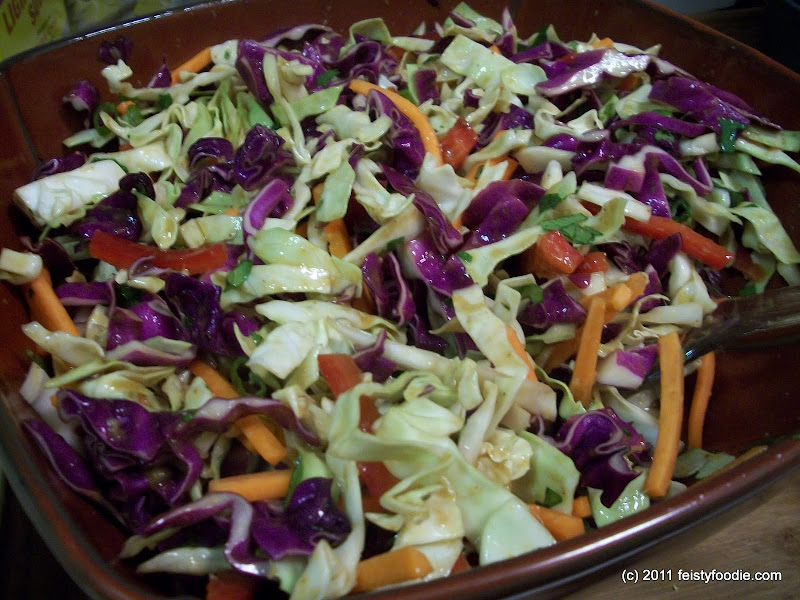 To accompany the ribs and crabs, I made an Asian cole slaw. It had red & white cabbage, carrots, red bell pepper, cilantro and green onion. It was lightly tossed in a peanut butter/soy sauce dressing. It was super refreshing and cooled off some of the heat from the ribs. I didn’t make the dressing to the exact recipe, so while it was still tangy the flavor didn’t outshine the main dishes. Check out the recipe for yourself.

CT says: I’ll admit when TT showed me this recipe, I was uncertain how an Asian slaw would pair with fried soft shell crabs and bbq ribs; however I had nothing to be worried about. The slightly sweet dressing over the cabbage mix went very well with the proteins and added a nice crunchy texture to the plate. TT will definitely have to make this again for me! 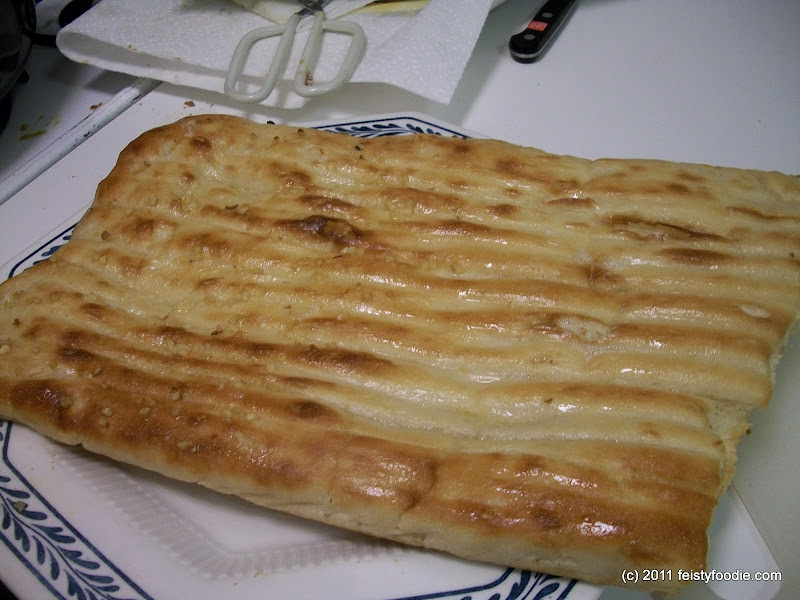 We also got some Afghan bread from the store. We buttered it up and put some fresh chopped garlic on half in order to make garlic bread.

What would a dinner party be without dessert? Aunt B graciously made two desserts since she is quite the Pastry Chef. 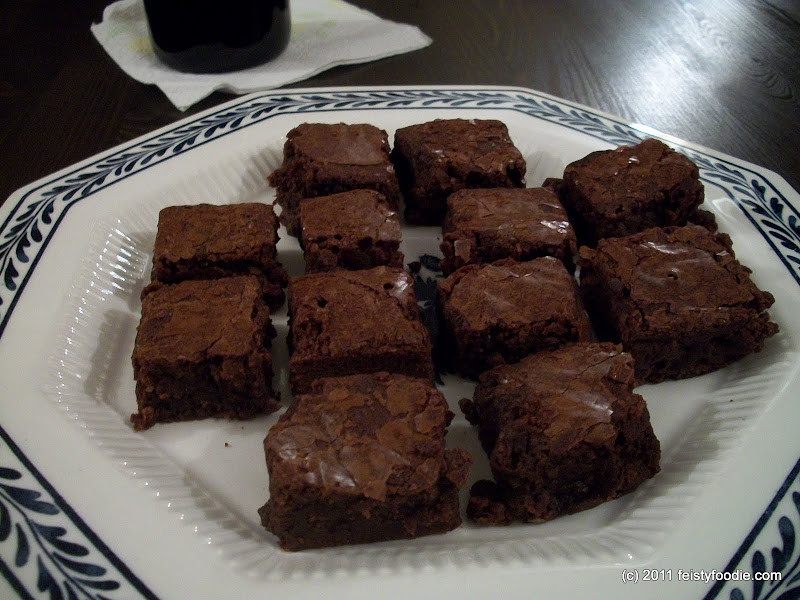 Chewy brownies. I believe she used an entire pound of chocolate in these goodies made from scratch. She was sneaky and cut them into small pieces, but still brought two or three large tins full of brownies. 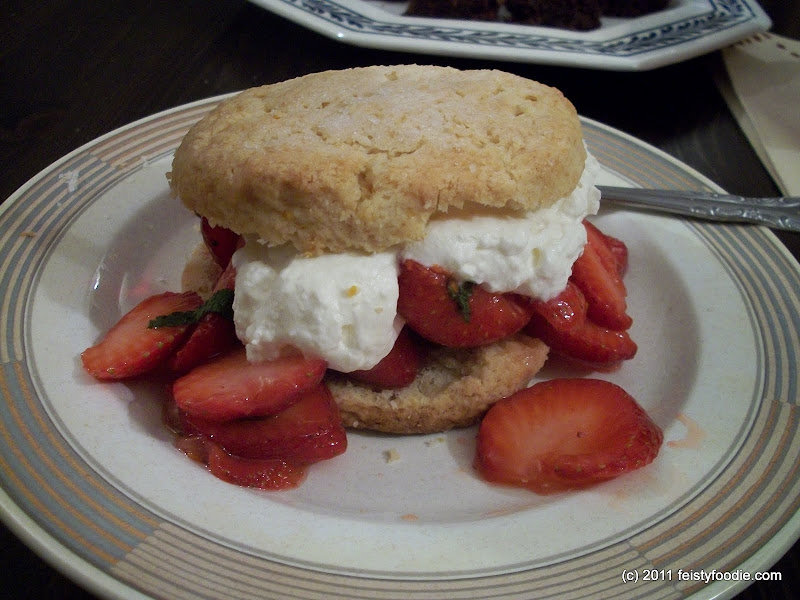 She also made mini strawberry shortcakes. The cake “biscuit” was light and flakey and did a good job
soaking up the syrupy strawberries. I particularly liked the chiffonade of mint mixed throughout the strawberries. Each serving had a healthy dollop of fresh whipped cream. I am pretty sure I ate most of mine, so that goes to show how good it was. Even a savory person liked it.

CT says: Even after all that food, I quickly gobbled up both a brownie and my strawberry shortcake! I love the idea of individual cakes and the combination was so delicious! I sometimes forget how GOOD fresh made whipped cream really is. Yumm!

All in all, it was a great meal. CT and I did a pretty good job for each of us cooking our respective proteins for the first time. CT’s Dad was so happy with the meal that he asked us if we would be moving again anytime soon. I am looking forward to our next attempt at ribs and crabs, but not necessarily at the same meal. Let me know in the comments if you would like some more of the recipes(although many of the dishes were only “based” on actual recipes.)