It had been a while since we used a Blackboard Eats coupon, so we perused the listing of available offers to see what piqued our interest. A French bistro called Lina Frey in the Lower East Side sounded like the perfect dinner for a warm almost Summer evening.

Once we arrived we saw that they were in full Summer mode with the front wall of windows completely open onto Houston Street. Strangely, around 7:30 there was only one other table with customers. The hostess offered us a four-top right at the front. I guess she wanted to make the restaurant look busier by having us sit along the sidewalk? Anyway, it made for some good people watching except that the menu was basically over CT’s head so passersby who perused it were almost standing on top of her. 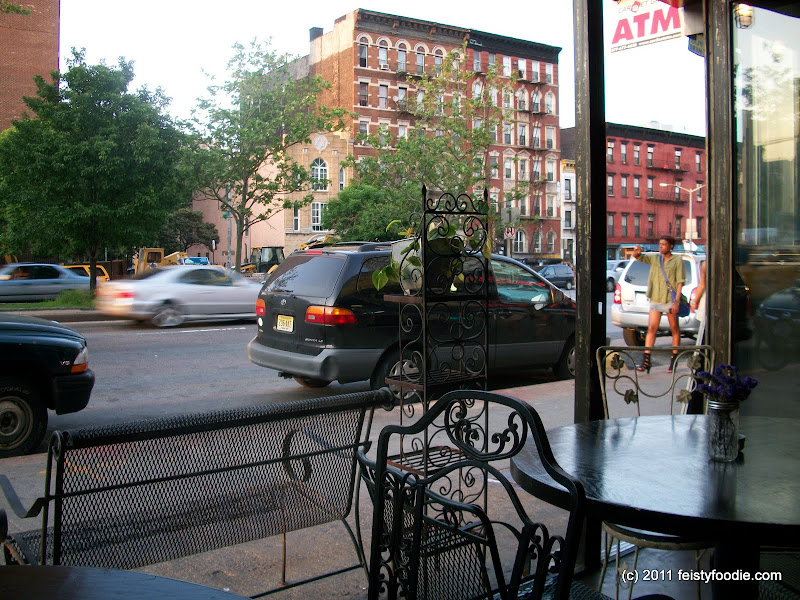 To drink I order us a bottle of Savignon Blanc. It was way too hot out for my usual red wine. I remarked to CT that I was pretty sure that was the first time in my life ordering a bottle of white wine. It was a nice, light wine that was quite refreshing. 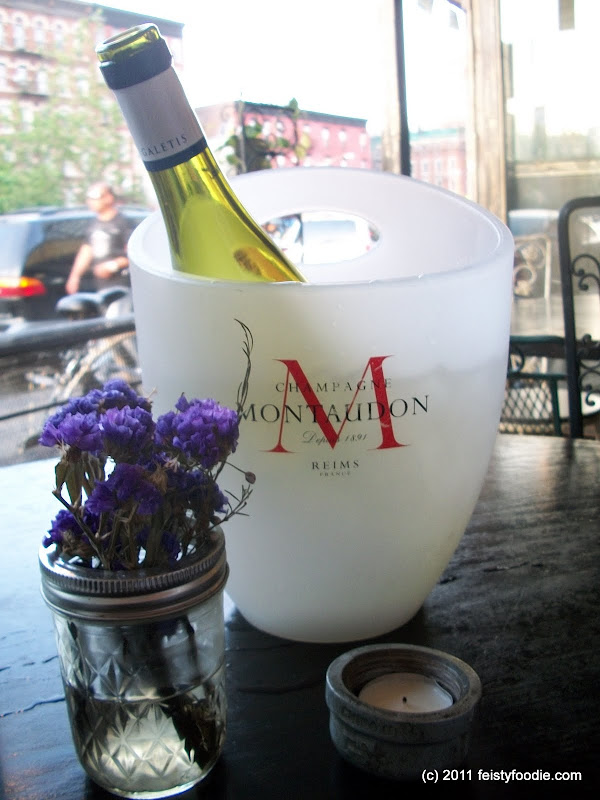 CT says: I wish it had been chilled before they brought it to the table – the first glass was a bit warm. But the next was nicely chilled and perfect for the warm evening.

As is usually the case with BBE patrons, they over-order which makes the discount worth it to the restaurants. We were no exception and started with a couple appetizers.

Goat cheese on grilled baguette. Quite a healthy portion size and each piece had a fair amount of goat cheese, which was quite “goatey.” 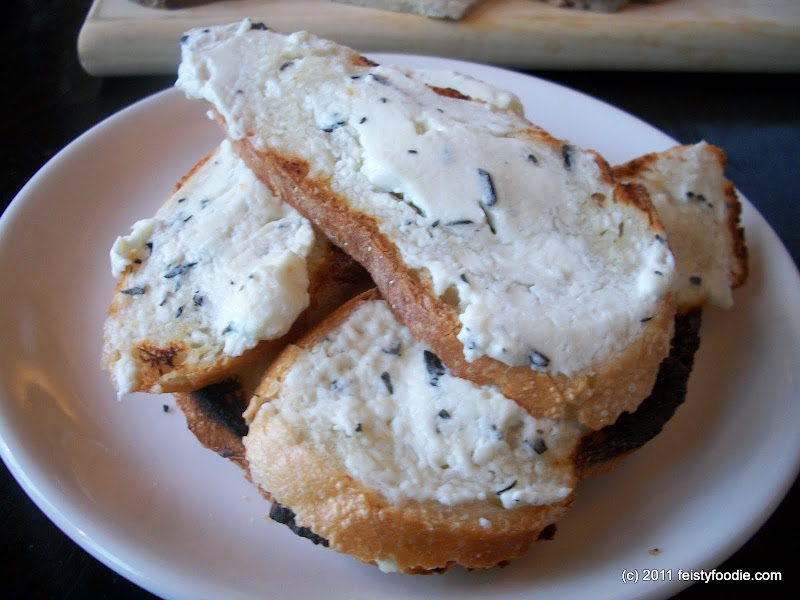 Fennel & Arugula salad with shallot mustard & lemon vinaigrette. Despite being served part of the root(bottom left) it was a pretty good salad. It was dressed very lightly, which allowed the fennel to shine. 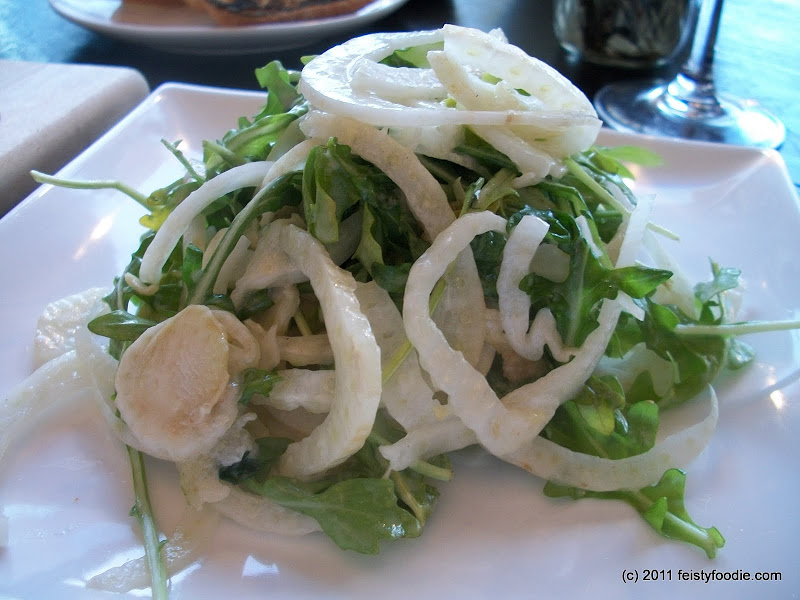 The salad was helpful in offsetting the charcuterie plate which had duck rillette, foie gras terrine, country paté, sausage, and a cornichon. I surprised CT when I had some of everything since I am not huge fan of terrines and foie gras. Although it doesn’t look like a lot, it ended up being quite substantial. The foie gras terrine was actually pretty mild, so I enjoyed it more. The country paté was good, but seemed a little dried out. 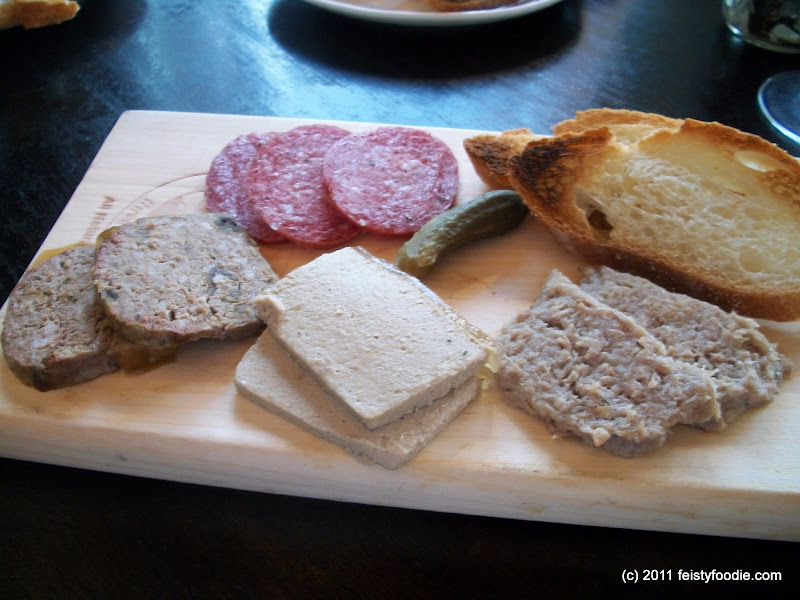 CT says: The appetizers were all really delicious and largely sized. The goat cheese had a great creamy texture over crunchy toast. The salad was perfectly dressed, and the fennel didn’t have that strong licorice taste I usually dislike. Plus the charcuterie plate was filled with all my favorites – duck, foie gras and paté? Yes please! The foie gras was probably my favorite (obviously) but the terrine was not far behind. However, the rillete was only ok.

All of the entreés were under $20 and the menu didn’t state whether anything came with them(for the most part), so we decided to get a side vegetable for each of us.

For her main, CT chose the Duck Leg Confit on a bed of warm citrus vegetable slaw. What a strange sauce on top, really bright orange! I had a taste and it was pretty meh. 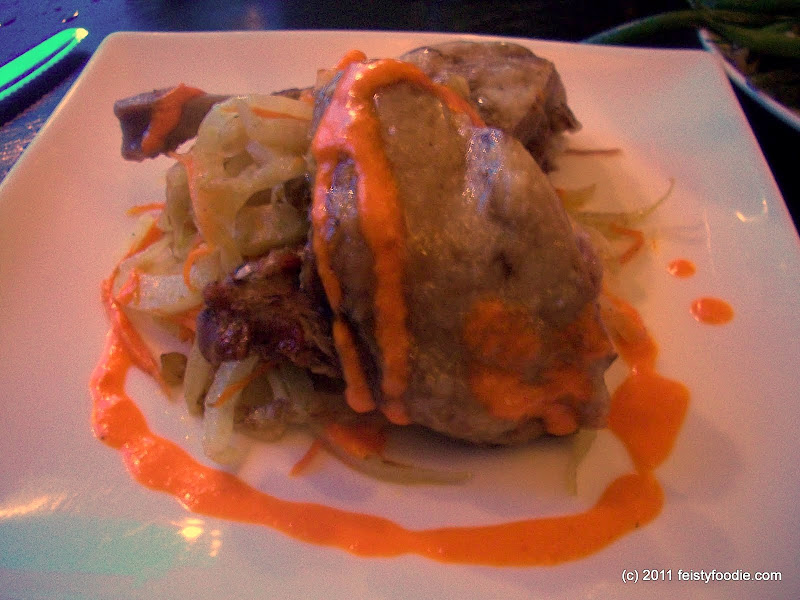 Her side was the haricot vert with caramelized shallot. As you can see the green beans were very shiny. This was due to them being cooked in way too much oil. Gross. Serves us right for trying to be “healthy” with a green vegetable. Never again! 😉 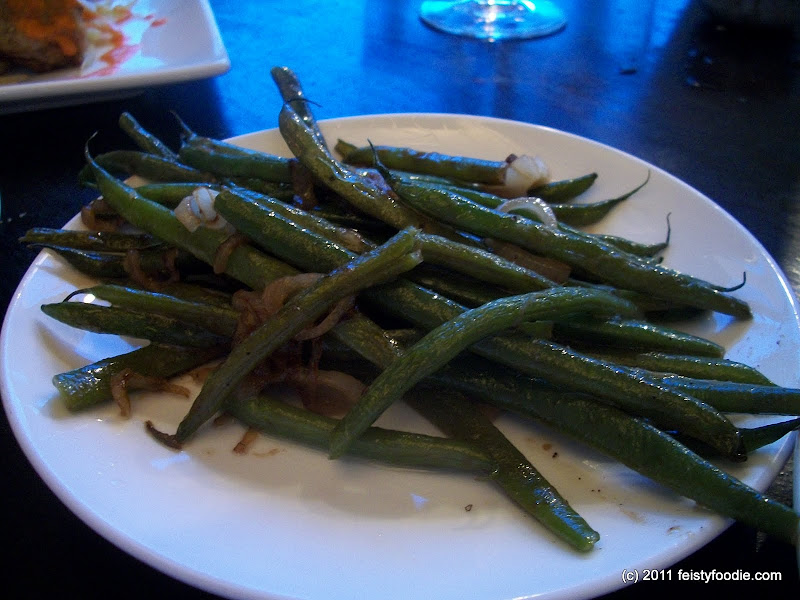 CT says: The duck leg was actually pretty juicy and had a nice flavor, however the thigh piece was overcooked, dry and generally inedible. The slaw beneath was oddly pretty greasy, which combined with the super greasy (though nicely flavored) haricot vert, made for an overall mess. A major disappointment after the successful appetizers.

I decided on the Grilled Spiced Marinated Shrimp. I was mystified when this plate was put in front of me. There were four shrimp on top of a vegetable slaw topped with a couple of tortilla chips and a tomato salsa. I had to remind myself that I was in a French bistro. I was disappointed by the few shrimp, but then again the dish was only $12. After putting a bit of slaw in my mouth, I had a strange moment. Apart for the incredible greasiness similar to the haricot vert, the flavor perplexed me. It took a minute or two, but then I placed it. The slaw tasted exactly like the vegetables in lo mein from a really bad Chinese take-out joint. The chips and salsa were actually the best part of the dish. The salsa was fresh and had some good heat from the jalapeños. This was one of the weirdest dishes I have ever had in my entire life. Some sort of French/Asian/Mexican fusion? I hope this won’t become a new restaurant trend here in NYC. 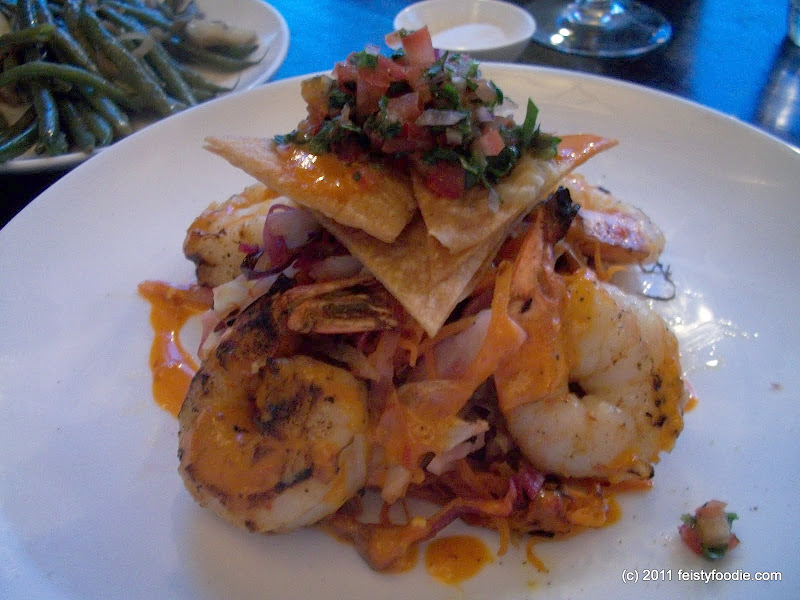 For my side, I ordered the roasted potatoes with rosemary. Apart from the almost complete lack of rosemary, the potatoes were very good. Surprisingly enough, they were not greasy at all. Crisp on the outside, soft on the inside. 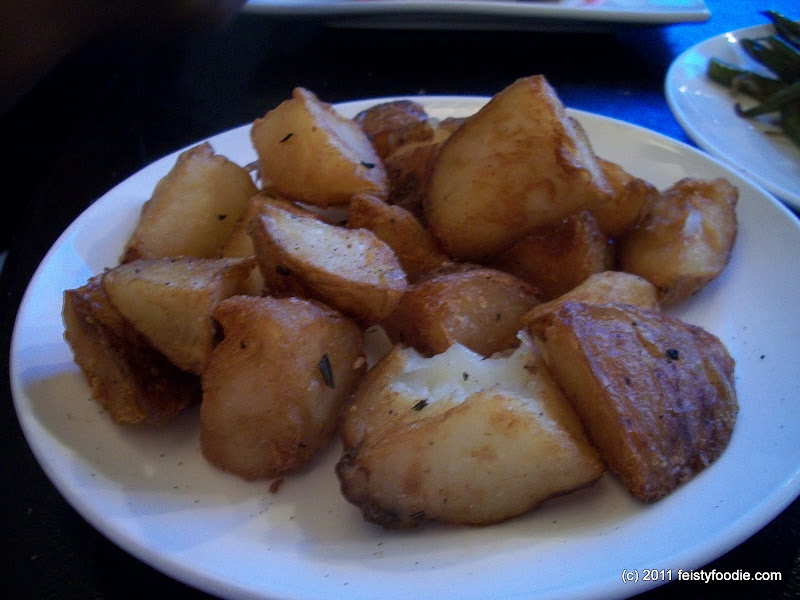 Although we were in an ice cream mood, since every other person walking down the sidewalk in front of us had ice cream, CT felt that we could not leave without ordering a crepe. On the restaurant’s website, they tout that they won Citysearch’s 2010 Best Crepe in NYC. Although Citysearch is probably even worse than Yelp, so the award doesn’t necessarily mean much. She chose the Nutella crepe. Unfortunately another disappointment. The crepe was taken off the grill way too soon. As you can see, the batter had no carmelization on it. So sad that they couldn’t even get a crepe right. At least the gooey Nutella was tasty. 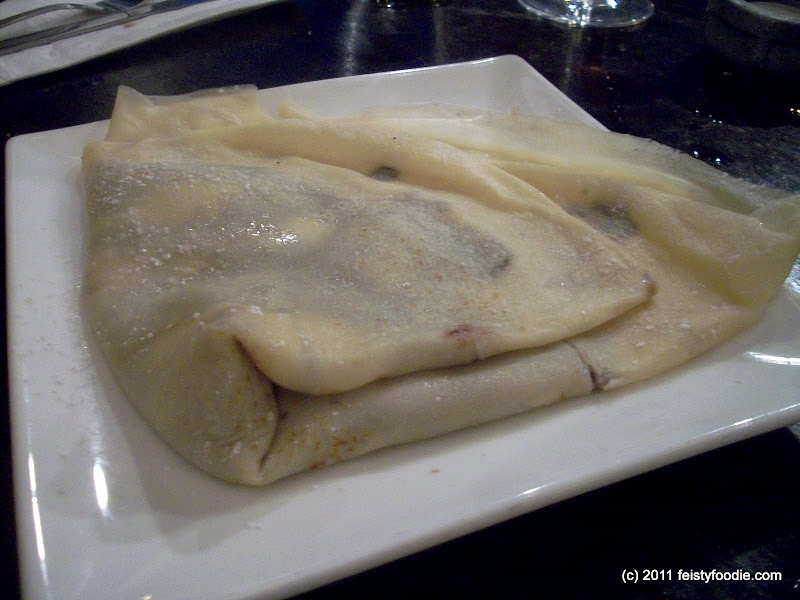 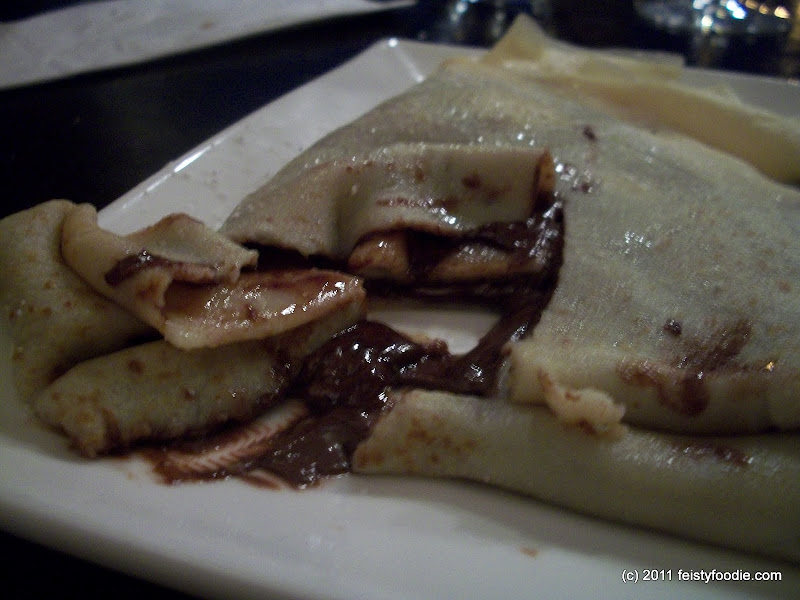 CT says: I’ll admit TT warned me against it, but I was determined to try a crepe. And…well… the nutella was gooey and yummy.

All in all, Lina Frey was pretty mediocre leaning towards bad. The meal started off well, but their mains and dessert was pretty terrible. Since it is a nice space in a great location, I might return for drinks and maybe an appetizer, but that’s all. At least we had the Blackboard Eats deal, so we didn’t have to pay full price.