Now that CT and I have been co-habitating for a couple weeks, Mother’s Day 2011 was our first foray into two celebrations. Rather than squeeze time with both our families on Sunday, we celebrated with CT’s family on Saturday. Last year, CT’s sister (ML) and brother-in-law (TL) had a Maryland crab boil at their apartment. It was excellent. TL has perfected his recipe for Old Bay crabs. This year due to our busy schedules, we ended up going out to celebrate. Since CT’s Mom had just come back from a four month trip to India, she had a hankering for crabs. ML had heard good things about Clemente’s Crab House in Sheepshead Bay(Brooklyn), so we piled in the car for the trip out there.

The restaurant was very close to the Belt Parkway, but it was still tricky to find. You will get lost, so just accept that and you’ll be fine.

It was a relatively nice day, so we sat out on the deck overlooking the water. The forecasted rain never came although it looked like it was going to any minute. 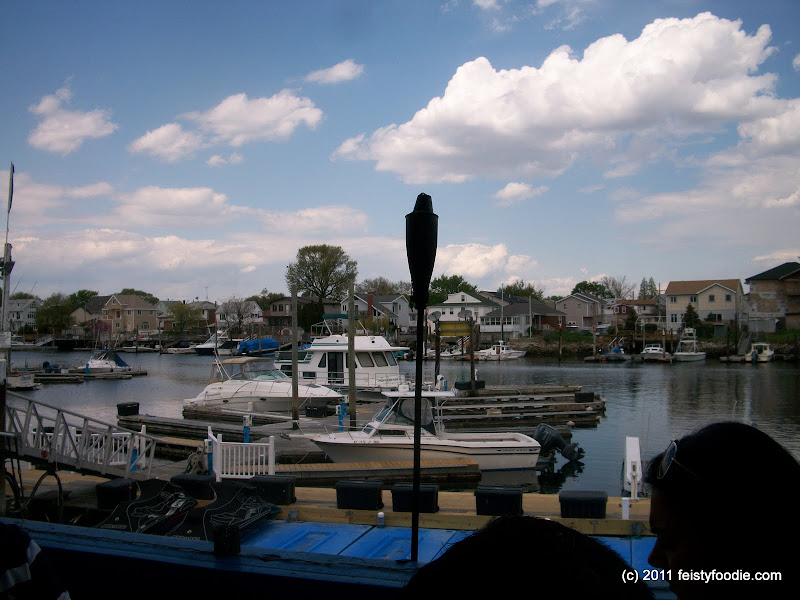 The deck area was a good size. It was quiet since we were there during the middle of the afternoon, but I am sure it gets packed on warm, Summer days. 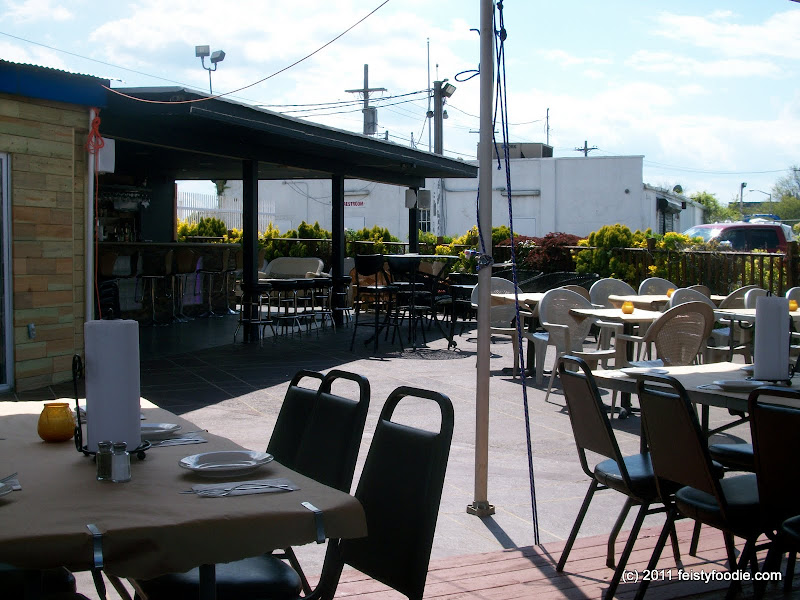 I had my first Sam Adams Summer($5) of the season, which paired perfectly with seafood. 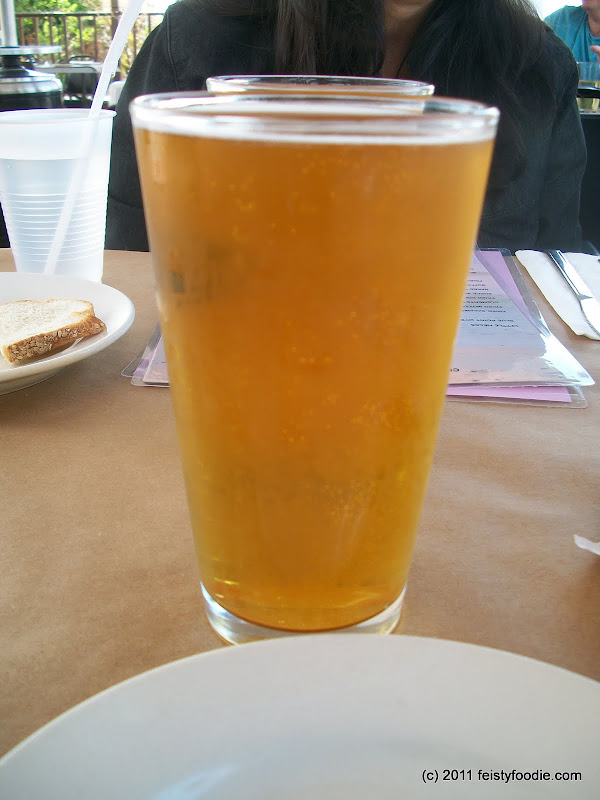 We started off with a couple appetizers.

Fried Rock Shrimp with Chipotle Remoulade ($10.95). These were quite good. Fried perfectly and not greasy at all. The remoulade could have used more chipotle, but was more than acceptable as is. 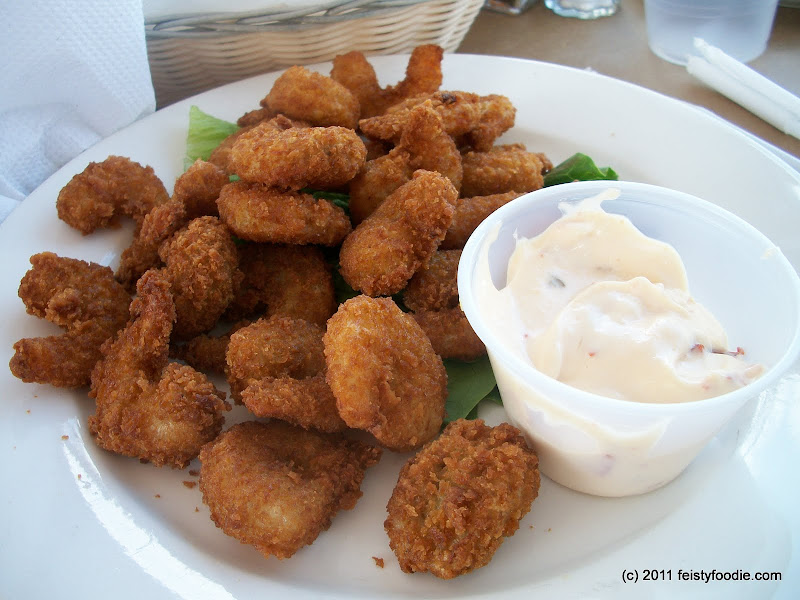 CT says: Nice and crispy on the outside, juicy fresh on the inside. They didn’t taste like something frozen you could get at just any bar or supermarket.

Dozen Blue Point Oysters ($22). These were excellent oysters. They were plenty juicy and the “liquor” was so flavorful that the cocktail sauce and horseradish was not even needed. My only complaint was that the bottoms of the oysters were not released from the shell. This increased the chances of losing some of that delicious liquor while freeing the muscle with a utensil. 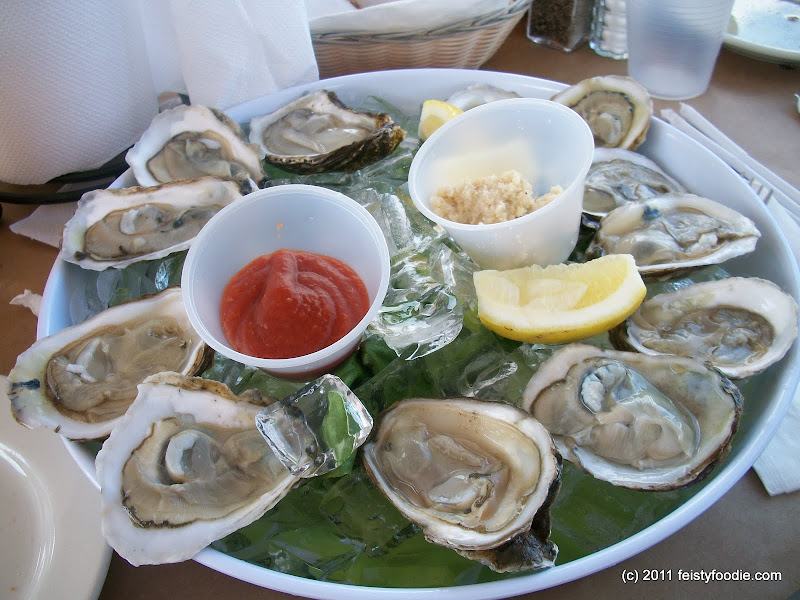 Since it was a little chilly in the shade, the lady of honor also got a cup of Crab Chowder ($4.95). She allowed everyone a taste of this creamy/buttery soup. She kept mentioning how rich it was, so I think that meant she liked it. 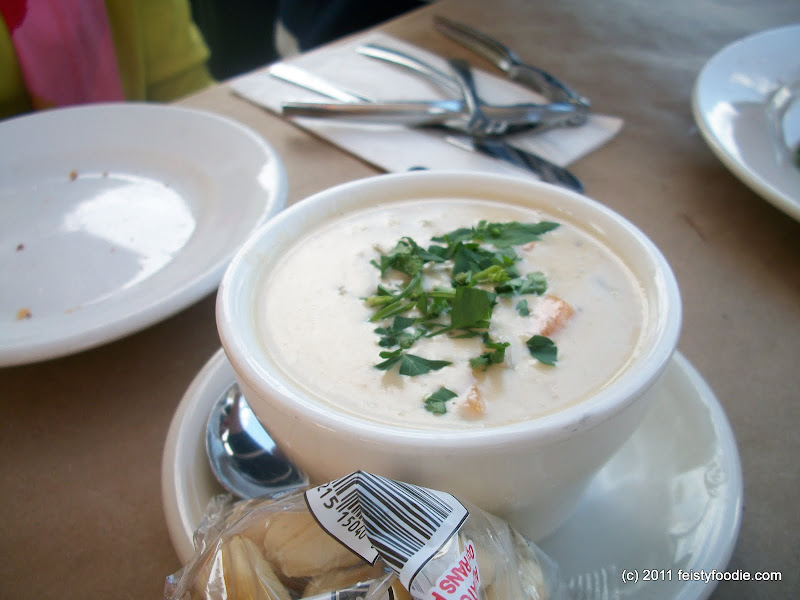 CT says: Unfortunately the soup was barely room temperature, which seriously detracted from rich and crab-filled soup. It was a little too buttery for me, but I think with some oyster crackers or bread this would be good. Really, the temperature was the major downfall.

Enough stalling, we were really only there for one thing: CRABS.

Don’t forget your bib. This will get messy. You will also find yourself with small cuts on your hands from the sharp parts of the crab shell. Don’t worry it will be worth it. Eating crabs like this may be where the term “working for your dinner” came from. 😉 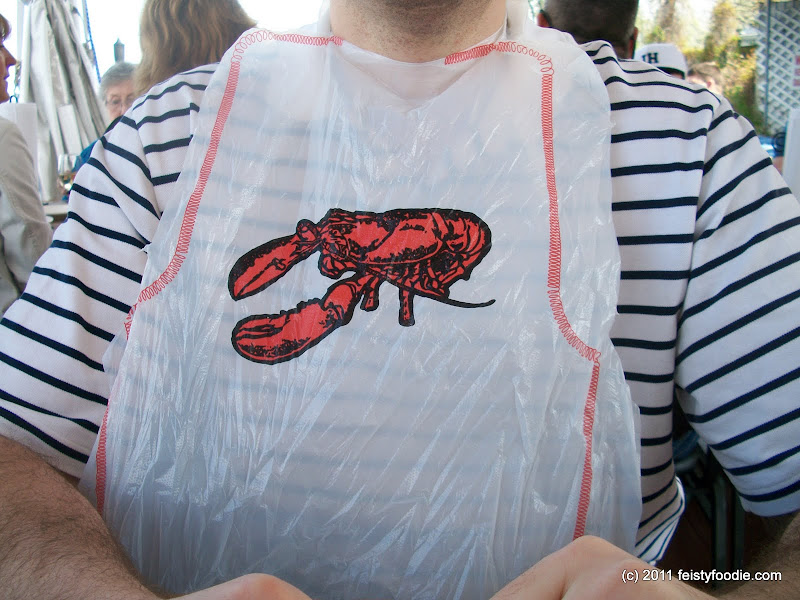 Although they offer AYCE crabs for $32.95 pp, we figured it would be best to order a couple dozen to start and then we could always order more later. These suckers take a lot of work to get the meat out of, so most people(including myself) get tired from the work before getting super full, which is a good thing. Clemente’s offers two flavors of crab; traditional Old Bay or Garlic style. We got a dozen of each ($29.95).

I started off with one of the Old Bay crabs. It was good, but the meat was a bit dry. It seemed to me that both styles of crab were steamed in plain water and then topped with the flavoring. Crabs are a lot less flavorful when the seasonings are only on the outside. The crabs did have plenty of “tamale” on the inside which helped somewhat. 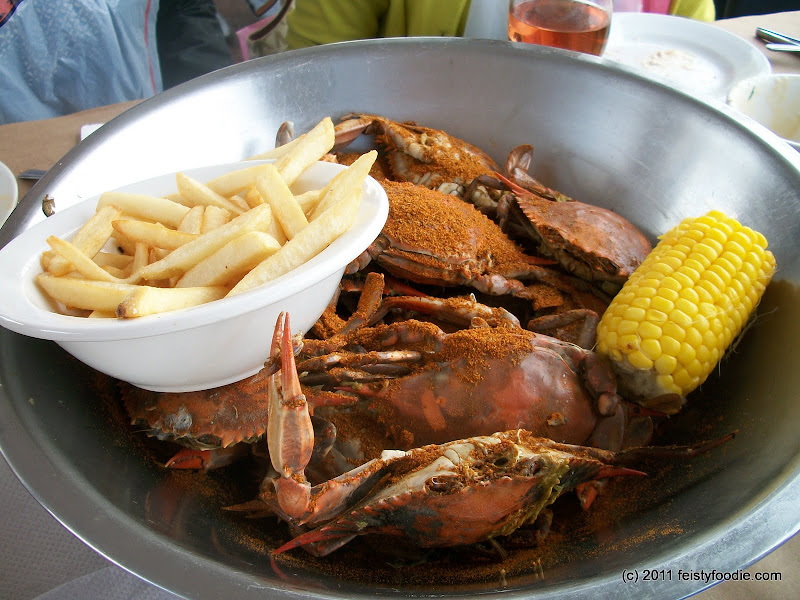 I found the garlic crabs to be juicier and more flavorful. There was a ton of roasted garlic cloves mixed in with the crab. 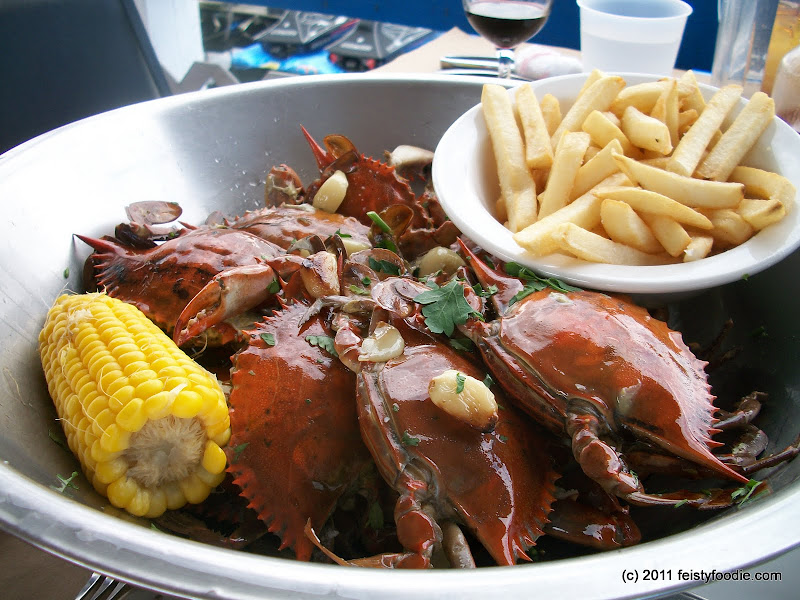 CT says: As a fairly new whole-crab eater, I’m still learning the ways of digging into these suckers. So I started a little slower than the rest of my family. However, slow and steady wins the race, right? Oh wait, it wasn’t a race? Anyways, although the crabs were a little smaller and not quite as juicy as I’ve seen before, I’ll blame it on it still being early crab season. I enjoyed both flavors and realized that the crabs at the bottom had a lot more Old Bay seasoning, providing more flavor and spice. Oh right – that’s where I was the winner because I got all the ones at the bottom! So moral of the story – eat slowly and get the best selection!

Each serving came with a small bowl of mediocre fries and a very good piece of corn. While the fries weren’t that great, I ate them anyway since I needed some carbs to go along with the crab. They also tasted GREAT with the garlic and oil in the bottom of the crab bowl. Yup and I wasn’t the only one to do that, hehe. I was pretty impressed by the corn since it was so juicy and flavorful. The beginning of May is nowhere near prime corn season. The corn was so juicy that CT actually sprayed corn juice across the table onto my head!

CT says: Ooops!! Sorry TT, but totally worth it, that corn was great! Especially rolled in a little extra Old Bay seasoning for some heat!

We ended up getting another half dozen Old Bay crabs since the majority of the table preferred them.

Here is a shot of the aftermath after TL was done. We all had similar piles in front of us. 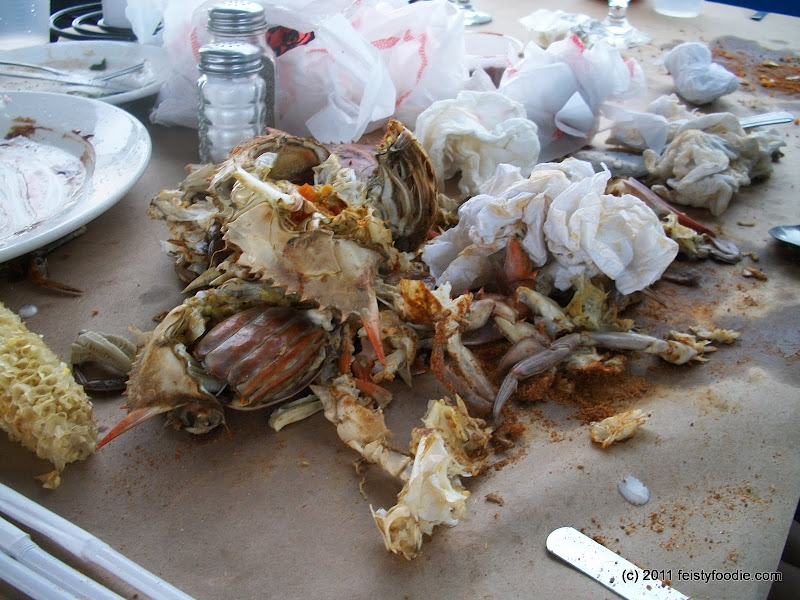 The Manager treated us to Deep-Fried Oreos with Vanilla Ice Cream for dessert. I saw on the menu they also had deep fried twinkies. I had never actually had this before so it was a welcome surprise. We all needed a little sweet something to counteract all the salt we just ingested. I think we cleaned the plate in tad under a minute. The batter was light and airy while the Oreo became cake-like. It was quite good, but one was MORE than enough for me. 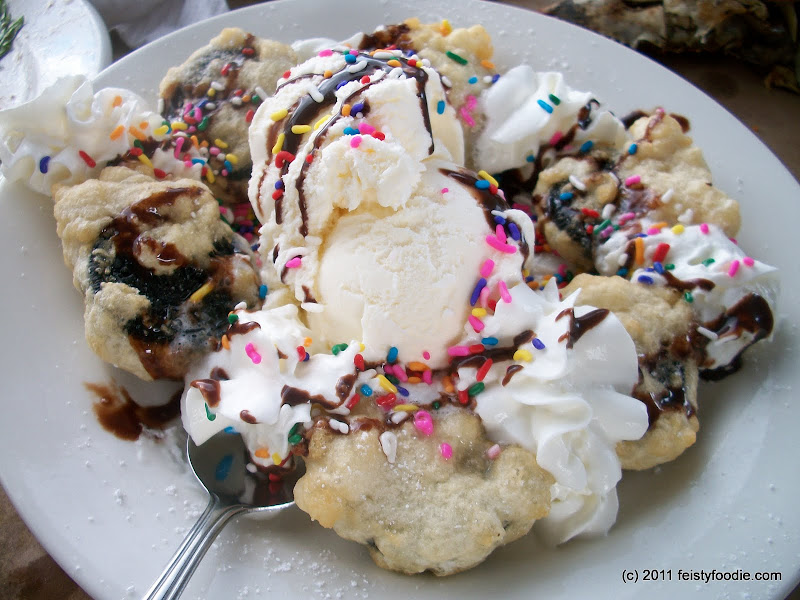 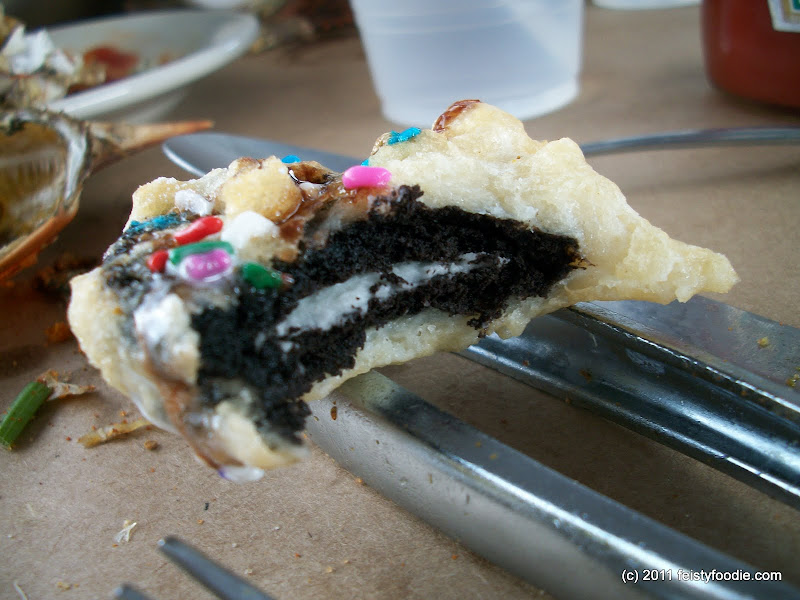 CT says: Save room and get these. The balance of sweet to the salty meal was perfect!

All in all, this was a great way to celebrate Mother’s Day or to spend a lazy weekend afternoon. The staff were incredibly friendly and helpful. I think you pretty much have to have access to a car in order to get to Clemente’s. Even then, it is not guaranteed you will find it. Note that the restaurant is CASH ONLY, so be prepared before you go. Thanks to CT and ML for treating us to a special meal.