You should all be familiar by now with my Reinventing the TV Dinner series, right?  I have one night a week that I watch a few hours of TV, and I tend to eat dinner at that time, too, just so I can balance a tray on my lap eating food that’s been portioned out for me…

Well, excitingly, last week I saw a ceramic TV dinner plate in a store while looking for demitasse cups.  Unfortunately, it was $12, and I passed.  Plus it was ceramic which meant that it was heavy and breakable.  But once I put it out into the universe that I would be interested in buying more, of course more appeared – this time, in the form of a friend messaging me to tell me that at the store she works, they had a bunch of different trays, each 99c.  Yeah, that’s a price I can live with… so I picked up a couple.  In the next few weeks, be prepared to see new trays!  🙂 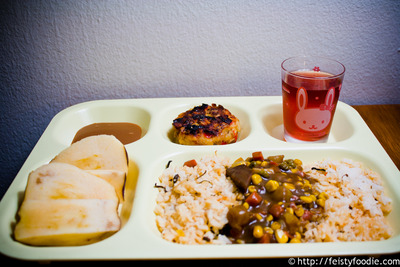 Unfortunately, I was pretty unprepared for my TV night as life has been crazy hectic and busy lately, so I threw together a bunch of stuff. 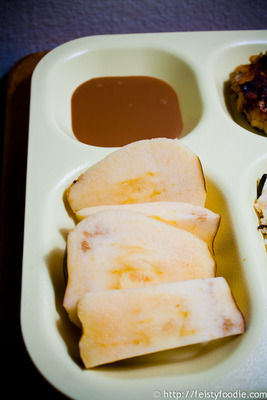 Dessert was an apple that really probably should have been eaten sooner – or just trashed by this point – but I soldiered on because I was able to dip it into… uh yeah, what’s that?  Goat milk caramel that’s what.  I mentioned this last Friday, and here it is again.  SO GOOD.  SO YUM.  Omg, I want to just eat the whole jar in one sitting… 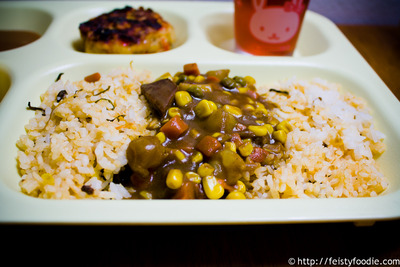 My main course, which was really just mixed rice (meaning, I took some white rice and mixed in some random veggies/kimchi and furikake) topped with beef curry.  There’s no recipe for the curry because I just buy Japanese curry bricks and this time, I boiled them in some water and stirred until it became a sauce (I usually do it differently, but this time I went this way).  Oh, and then I added frozen veggies into it. 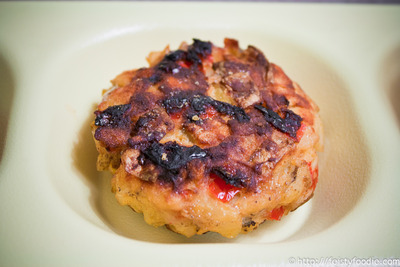 Here’s a potato cake.  I bought a 5 lb. bag of potatoes for 99c which is ridiculous.  I love potatoes.  Have I ever told you how much I love potatoes?  It makes some people really uncomfortable how much I love potatoes.  I microwave mine when I’m lazy, scrub them clean, poke the skin with a fork or knife a few times, then pop it in the microwave for 5 minutes.  No plate, no cover, nothing, just let it spin in there.  It comes out perfectly cooked every time.  This time, I remembered how my love of potatoes makes people uncomfortable, so I took a few potatoes I’d microwaved, skin still on but they were cool, and used a fork to mash them a bit.  Once they were fairly well mashed, I added chopped peppadews for a little zing, smoked paprika, salt, and an egg for binding, then stirred it all around, formed cakes with my hands and pan fried them.  They were good, but definitely need tweaking as I wanted something from them they just didn’t give.  Play around with seasonings and vegetable additions for your own tastes! 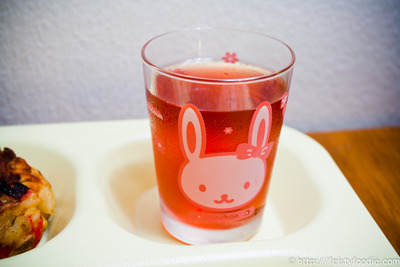 Last but not least, a small juice glass of table wine.  I bought a lot of wine on my recent sojourn upstate, and I’m drinking it… I’m drinking it… You’ll hear more about the trip soon, I promise.

Just another Thursday night for me.

***If you’re interested in the trays, I got them for 99c at Broadway Panhandler on 8th Street and Broadway in Manhattan.  They had a bunch last week and I imagine they still have them.

Happy eating, guys – what do you like to eat while you watch TV?  Maybe you’ll see it here soon 😉