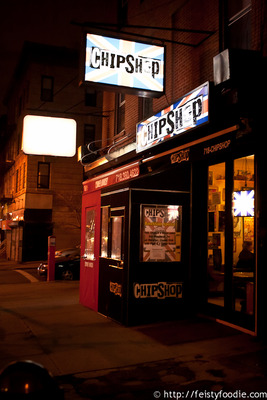 Friends who share their fortunes with you are quite lovely, aren’t they?  So it was that I came to Chip Shop Park Slope twice in a week; a friend of mine had two Groupons expiring soon, and I was invited to partake, indulging the anglophile that lays fairly dormant within me most of the time.

*Upon reflection, it occurs to me that though I often lament that I’m actually a jolly Southern girl trapped in a surly Northerner’s body, because I adore Southern US cuisine so much – deep fried butter, deep fried seafood, deep fried anything – the reality is that I’m just a mishmash of other regions around the world.  The Francophile within, who actually shies away from haute cuisine, adores macarons but also loves a well-made baguette, a sliver of cheese, a glass of good wine… and could while away her life at outdoor cafes, mooning over life.  There’s the Bay Area me as well; drastically different in personality, all about local, organic, sustainable food, shopping at farmer’s markets on a regular basis, and always hip to the newest food trend… And then there’s the Anglophile, who wants nothing more than to eat some decent bloody fish-n-chips, and every once in a while explode with “you bloody cow!” and not be referring to the rare steak on her plate… Have I mentioned how much I LOVE fried fish?  It’s unreasonably difficult for me to find some that passes snuff, and it appears to not be in vogue right now, which means it doesn’t appear on menus with any frequency and I just have to make it at home if I want some good fried fish…

ahem, back to the food. 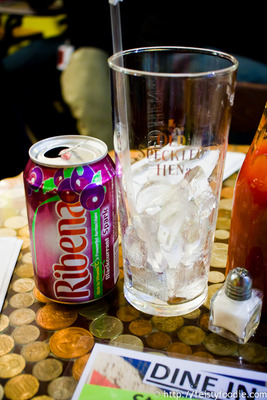 I managed, somehow, to be rather on time, while my friend showed up 20 minutes late.  The really super nice server whose name I didn’t manage to get had no problem seating me and didn’t seem particularly put out when it took so long for my friend to arrive; I felt uncomfortable but through no prodding of hers, which is always nice.  To ease my wait, I ordered a soda; the only one I found on the menu that I didn’t recognize, Ribena, which she informed me was black currant flavored. 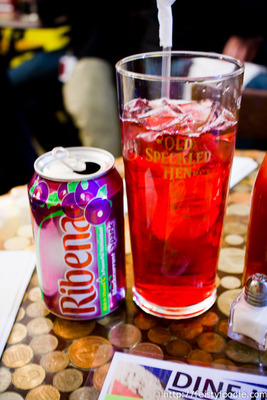 Ah, love.  A brief history lesson: my parents are from Hong Kong, which until 1997 was a British colony.  As such, they grew up with a lot of British influence over their cuisine and culture.  Why does this matter?  Well, when I took a sip of this, I was immediately transported to the first time my parents visited Hong Kong during my lifetime.  My father brought back an assortment of goodies for each of us kids; I was a sugar fiend (ha! imagine how he’d feel now that I’m all about the salt), so he brought me back a load of candies that could not be easily found in the US.  Black currant dominated a certain portion of the candy, and though I’ve hardly looked for it since then, my impression is that this is not a common American candy flavor.  In any case, one sip, and I was transported back to that time, those candies he’d brought for his darling daughter, and I was smitten.  Can I get Ribena in the US easily?  Anyone? 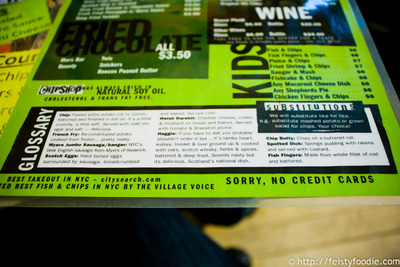 Since I had time on my hands, I examined the menu closely and was amused to find a glossary for the various food items.  Scotch eggs, haggis (which I’ve wanted to try ever since the first time I saw “So I Married an Axe Murderer” – that makes me a very odd child, since the way they describe it makes it sound quite unappealing- “I think it’s quite repellent; in fact, I think most of Scottish cuisine is based on a dare”), spotted dick, etc. – very cute. 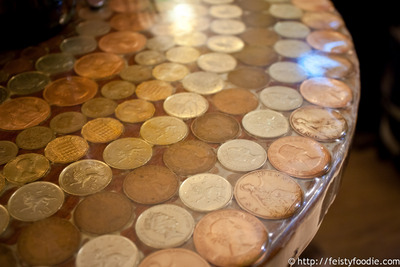 Our table on the end, closest to the kitchen, was topped with loads of British coinage, then shellacked.  We debated taking off with the table to cash in the money until we realized that most of the coins were worthless.  Ah well. 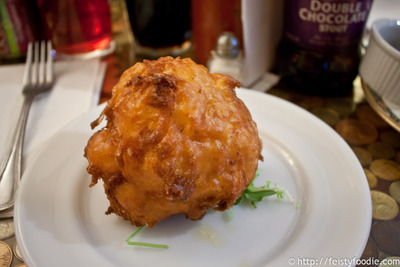 What is this big fried ball of…?  That, my dear friends, is a big ball of fried mac&cheese.  Madness, you say?  Impossible, you think?  No, my dear friends.  Have fryer… will fry. 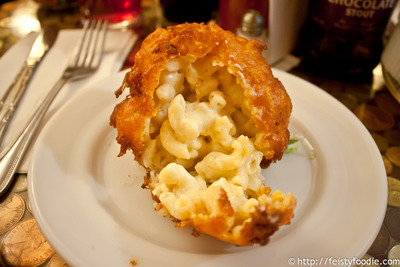 And there you go.  Proven.  The mac&cheese was on the slightly soft side, but what struck me was the coating.  It was a little thick, and tasted very doughnut-y… on the sweet side, and a little too thick for my taste.  I fretted that this might be the same batter they used for the fish&chips, and lamented that I may still not have found the fish&chips place of my dreams. 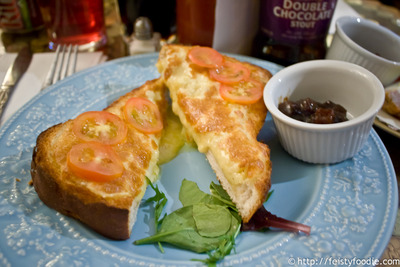 Welsh rarebit.  Another fun fact: I adore bunnies.  I have tried rabbit, but generally found it unpleasant to eat, and sort of don’t like eating them because I find them so cute (well, bunnies; not all rabbits are cute).  And many years ago, someone told me rarebit was a bastardization of the word rabbit, and I believed them for many years, until yes, quite a few years ago, but it’s not often I see it on the menu.  So I had to order it… right? 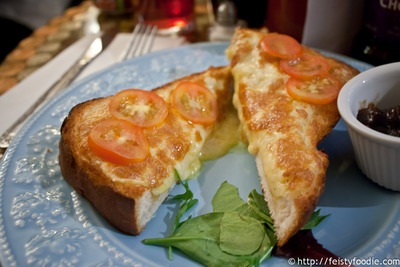 Cheddar cheese, cream & mustard on bread and baked (from the glossary).  I found this perfectly tasty enough, but I could probably attempt this at home and be happy.  No need to order it somewhere, though it wasn’t expensive, either. 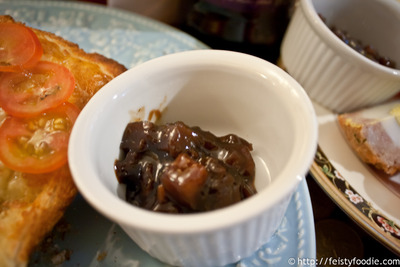 This came with a small dish of Branston pickle, which I later learned was a brand/name for a type of chutney.  I found myself really taking to this – slightly sweet, slightly pickly… all yum. Scotch eggs!  Hard boiled eggs with sausage pressed around them, then deep fried.  Again served with a small cup of the Branson pickle. 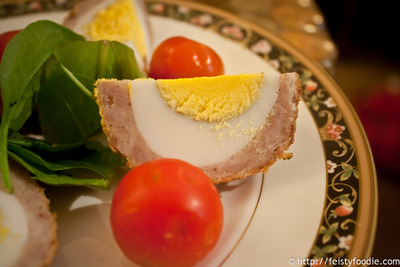 This was OK on its own, but eaten with a cherry tomato and then a bit of Branson pickle, it tasted like a very meaty, very delicious deviled egg.  You know how I like deviled eggs… so it was no surprise that I really liked this.  I must try to make this myself at home though! 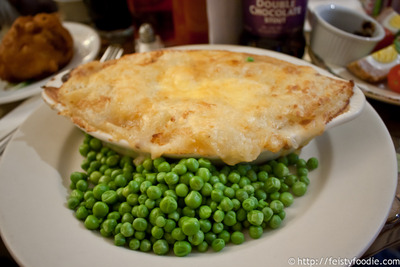 Beef shepherd’s pie!  I actually make this at home sometimes, though it’s been a few years, and my version is definitely bastardized completely (put it this way: I heard of it and the basic idea of what it comprised, but never had it before and didn’t look at a recipe before I set out to make my own version – and I used soy sauce.  And it’s delicious, but it’s surely only barely related to the real thing…). 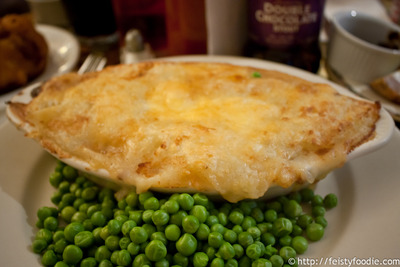 Look at that glorious topping – cheese, crusty golden… and of course peas.  The peas were, um, peas. 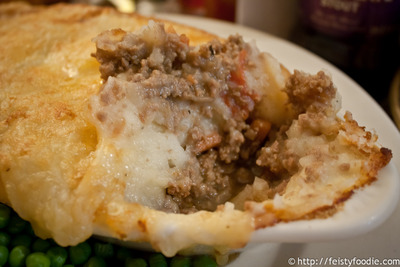 Breaking through that mashed potato crust with cheese, inside is beefy goodness, savory and delicious, with the slightest bit of ‘gravy’ or juices… yumm!  I was really thrilled with how good this was, I did NOT want to share… 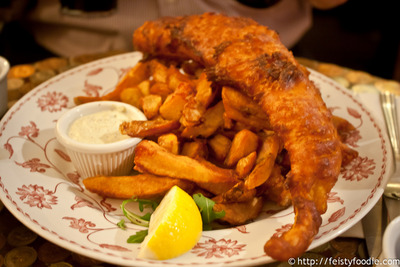 My friend insisted that cod was better than flounder, so this is what arrived.  I wasn’t all that keen on it and ignored it mostly in favor of the shepherd’s pie. 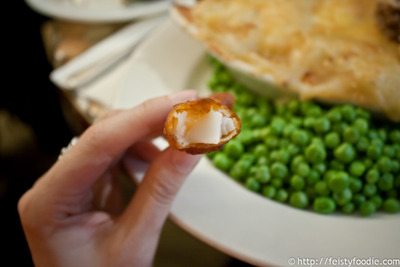 I found the batter a little too thick for my tastes.  Mm.  Not quite my favorite, though it was cooked properly. 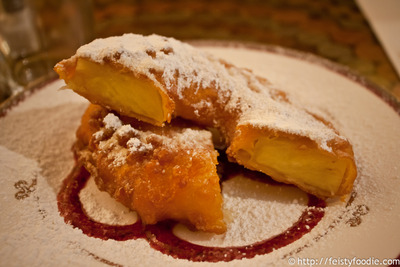 And for dessert – fried pineapple.  It was okay.  I don’t much care for hot fruit. The following week, upon our return, we sat at the table in the center of the row of tables, this one dedicated to glossy photos of Charles & Di.  Given that the Royal Wedding is quickly approaching, this seems apropos. This time, I was finally ‘allowed’ to order the fried haggis.  I’ve wanted to try haggis since I first saw So I Married an Axe Murderer years and years and years ago… which probably makes me one of the weirdest people you’ll ever meet, since the movie describes it basically as vile as you could possibly describe a food (as I mentioned above).  But I love trying new foods, and even more so, I have a curiosity about eating things that aren’t always considered the most normal in American society. 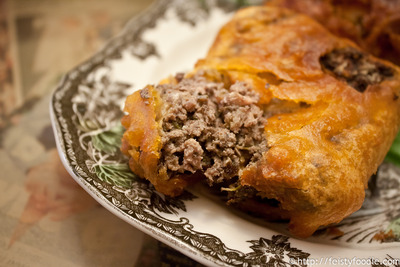 Don’t let that photo fool you: it isn’t ground beef deep fried.  It’s actually lamb’s heart, kidney, breast and liver, ground up, seasoned and cooked with oats, scotch whisky, herbs, spices, battered then deep fried (from the glossary).  Unfortunately, it boasted a metallic, tinny taste to it that I couldn’t get into and I wound up eating only a few bites before relinquishing entirely to my friend, who’d already ordered an appetizer. 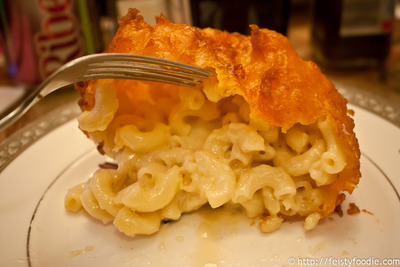 The fried mac&cheese, which, this time, had a thinner batter and tasted better.  Hmm, interesting. 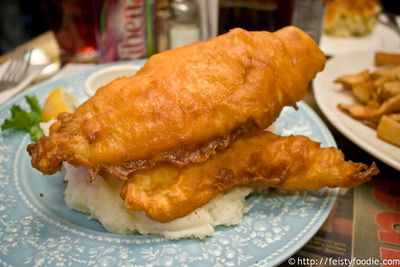 Though I’d wanted to order shepherd’s pie again, I decided to try something different – this time getting the fried plaice with mashed potatoes.  I love flounder… and plaice, according to my Googling, was very similar. Look how much fish they give you – that is a crapton and I can’t imagine eating that much fish in one meal, plus appetizers.  In fact, I didn’t – I took a lot home. This was much more to my liking – light, airy, flaky, crispy – and completely delicious.  The cod was a little too meaty for me, while this was just right.  Love. Steak and onion pie this time for my friend, with chips. The steak pie wasn’t my thing – tasted just like pot roast inside a pie shell – but my friend seemed to like it well enough. And for dessert?  Treacle pudding completely covered in custard sauce. I think treacle pudding was invented with me in mind; dense, caramelly, cakey, awesome – but what made it even better, even more amazing?  The custard sauce, wow, I think I could bathe in that.  Mmm, I have to learn how to make that.  It was freaking awesome.  I think if you put that on anything, it would taste good… oh goodness.  So great.

Yvo says: I’m glad I finally got my lazy butt over to Chip Shop for not just one meal, but two – great menu, with lots of good stuff on it.  I think I could happily return here over and over again to eat my way through the menu, though I might not be too happy with my weight after a month of that… Definitely get over to Chip Shop – this location or the Atlantic Avenue one – and check out the great British fare they have on offer.  So good, and incredibly reasonably priced.  Yum!!!
recommended