Two weeks ago, I was perusing one of my favorite NYC food sites, Eater, and noticed a small announcement that RUB BBQ was celebrating its six year anniversary. In honor of that, they were offering all-you-can-eat ribs with two sides and unlimited soda/tea/lemonade for $25.95 every Wednesday through the end of May. I quickly sent out an email to the FBM crew to organize a trip over there the following Wednesday.

Lo and behold, we rolled up with eight strong! One of us even bribed Yvo with two cupcakes to come along. I was a little worried that the place would be packed and it would be difficult for us to get a table, but those worries quickly faded. I think the staff at RUB was actually impressed that such a large group was there to chow down. Our waitress ended up being super nice and always made sure to come around at regular intervals to offer another round of ribs or refill our drinks. Some restaurants that offer AYCE specials usually try to make you wait as long as possible between rounds so you end up eating less(cough, Hill Country, cough).

After being seated, we were told the ribs would be a random mix of what they have on the menu. The waitress took our order for sides and drinks. Yvo and I both ended up getting the vinegar-based cole slaw and baked beans with burnt ends. I enjoyed the smokiness of the beans last time I was at RUB, so I decided to get them again. They ended up being too smokey for me this time, but I was there for ribs, not beans. The cole slaw was fantastic. The acidity from the vinegar really helped with digestion, which meant eating more ribs! There were also a few pickle slices in the tray, which also helped cleanse the palate. 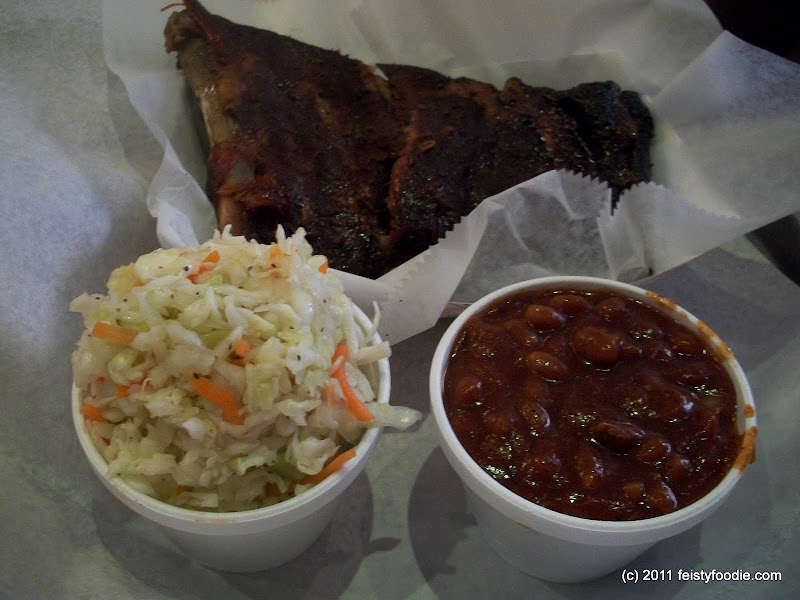 Beer Boor says: The abundance of celery seed made this a winner over virtually every slaw in town.

Yvo says: I wanted more pickles. The slaw didn’t do it for me though. 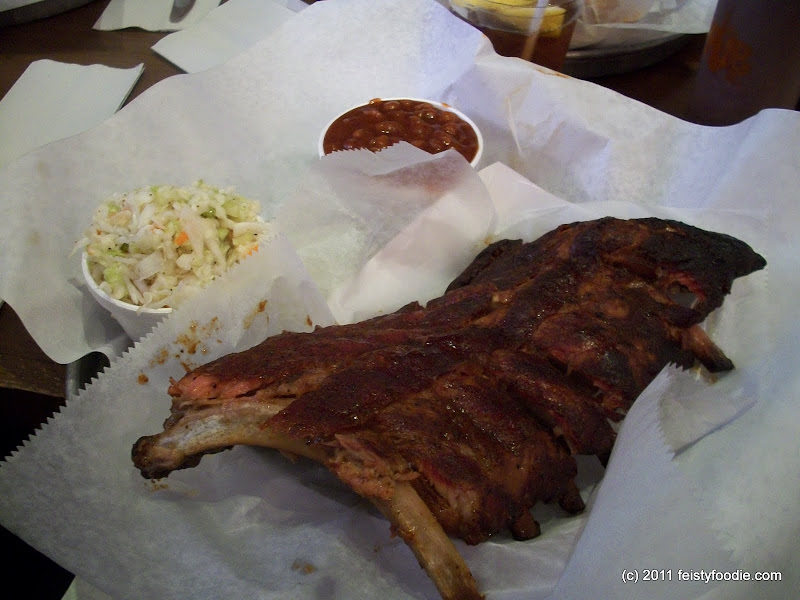 Enough talk about the sides, time for RIBS! Each serving was about a half rack’s worth of various pork ribs(spare, baby back, loin back). They were hit or miss depending on the person and round. Sometimes they were meaty and juicy other times they were greasy and fatty. Luckily, my first round was pretty near perfect. It didn’t even need any additional bbq sauce(sweet or spicy). I was able to put down another one and a half portions after the first round, which equated to about a full rack and a quarter. I would have made it to the full half, but the last round the ribs were super fatty and greasy. I was still quite happy with the overall meal since the previous two portions were delicious. 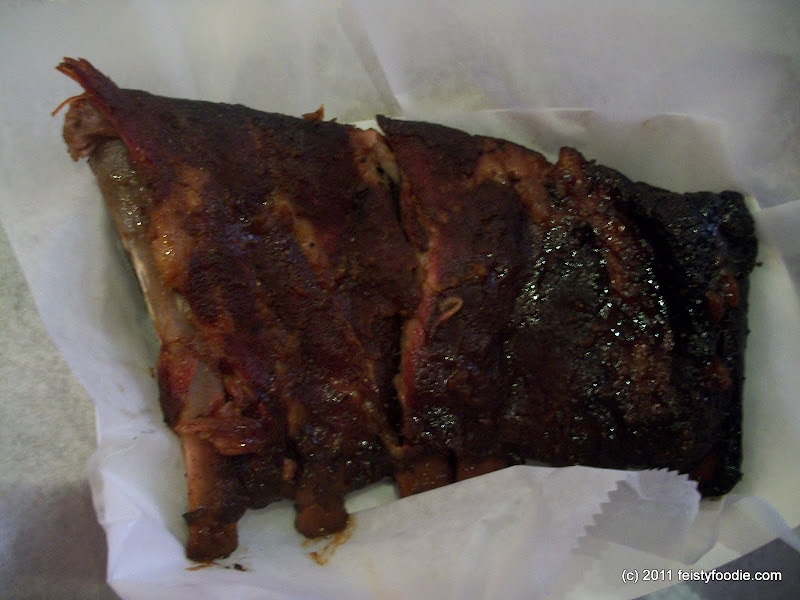 Beer Boor says: The baby backs were clearly the most succulent, flavorful ribs, having fewer fatty parts and remaining moist but not greasy, though the spare ribs certainly had a lot of charred flavor from the caramelized sauce.

Yvo says: I’m not sure what my first rack was, but I liked those much better than my second. I’m not really a rib expert, so I can’t tell you which ones I had, just the first ones fell off the bone and were tender, juicy, yum. I liked the sweet sauce for a little dip – no surprise. Awkward moment: our table was on the way to the bathroom; while I was stuffing my face at one point, a guy walked by and stopped to ask me what I was eating. I don’t know?! Hahahaha I think my glazed over expression scared him to keep walking…

Here is my best attempt at a table shot. WATCH YOUR FINGERS! 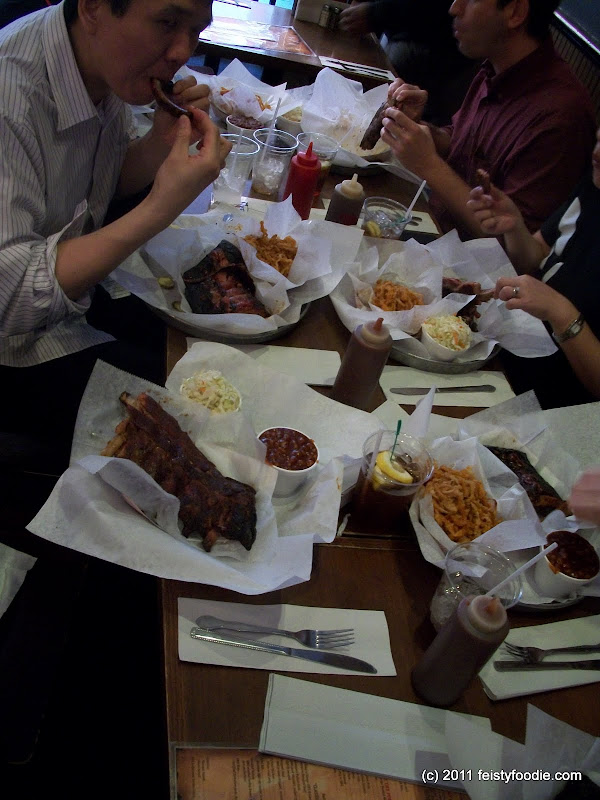 Since some of us in attendance were food bloggers, we knew before we started that it would be important to keep the bones so we could take a picture at the end of the huge pile. It actually became quite funny to ask the various servers/managers/waitresses to leave the bones on the table the first couple of times they tried to clean the table. “Huh? You want us to leave a disgusting pile on bones on the table?”

Check out the aftermath! I think all of us were quite full with just being on the verge of being sick. 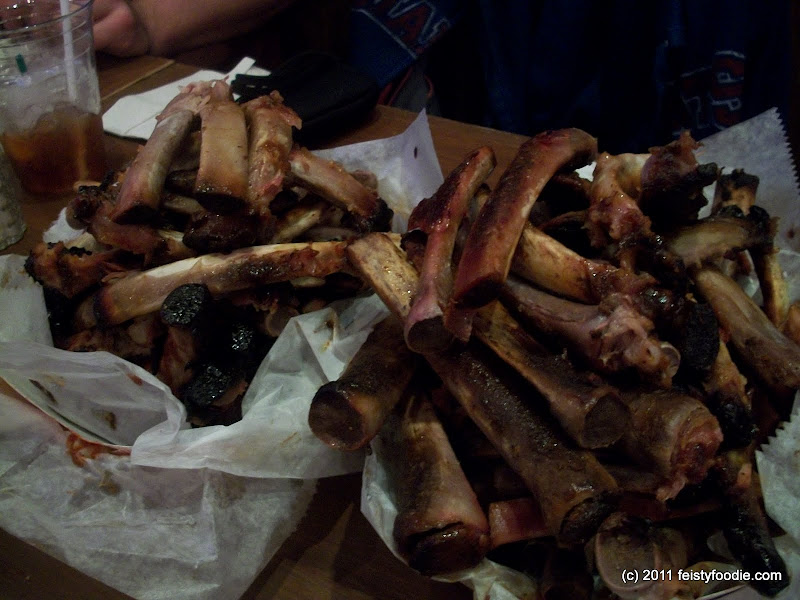 All in all, it was a great experience. As previously mentioned, the staff were super friendly and accommodating to our “crazy” group. Although some of the ribs were pretty fatty, everyone still enjoyed the food. Mazel Tov to RUB on their sixth anniversary. Be sure to stop by tomorrow or any other Wednesday to try the AYCE ribs yourself.