It had been a while since our cooking class group of friends had met up, when Robi sent an email out suggesting another meetup. Last time was dim sum at Golden Unicorn, this time the suggestion was Filipino food at the new pop-up restaurant Maharlika. It can be found during brunch on the weekends at Cafe Leon, just a few doors down from Motorino.

Pop-up restaurants are the latest trend here in NYC. Move over cupcakes, artisanal pizza, and food trucks. These temporary establishments allow chefs to get super creative with their menu. Since the startup costs are relatively small compared to opening a full on restaurant, the savings usually result in a more reasonably priced menu. The downside is that if you had a really great meal, the restaurant may be gone before you have a chance to go back.

Maharlika was opened by the General Manager of Resto Leon’s sister restaurant, Juliette. I think it was fantastic for the owner to allow the GM to do this. The place was packed the entire time we were there, so hopefully that translated into a healthy profit.

Even with reservations, there was a wait due to the incredibly small size of the restaurant. I believe the term used is “cozy” for most East Village restaurants. Once we wedged into our seats, we were given a couple snacks while we looked over the menu. I was liking this place a lot already!

A couple coffee cups filled with garlic cracker nuts. These were a super traditional Filipino snack. Very similar to American beer nuts. They were super salty and crunchy, but in a good way. It was a nice touch that they gave the table a whole bottle of tap water so we could refill our glasses ourselves to stave off dehydration from these nuts and the previous night’s escapades. 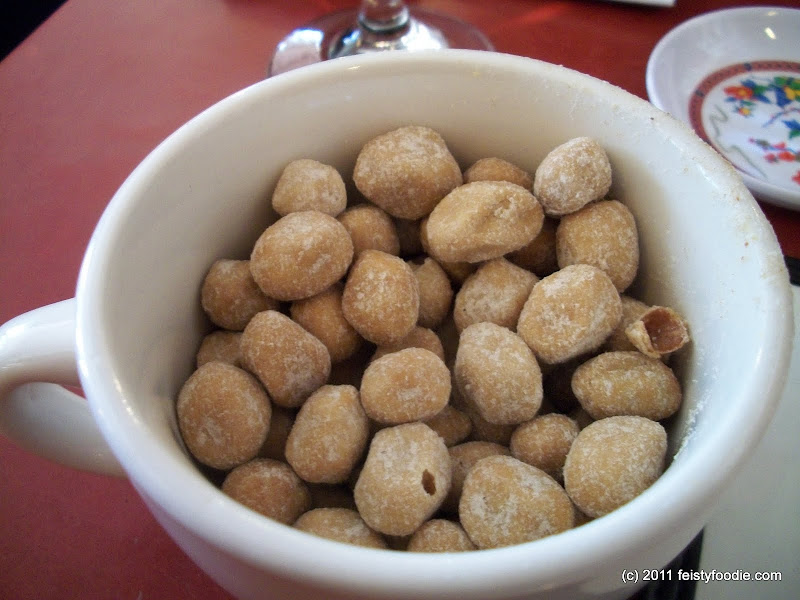 CT says: After gulping down the whole first bottle of water myself (yes, that “previous night’s escapades” may have been referring to me), these crunchy snacks were a great delight! I’m not a big fan of nuts, but I couldn’t stop snacking on these as we waited, and not just because I was starving.

We were also given a couple plates of chicharróns except it was chicken skin instead of pork. At first I thought this name was wrong because I though chicharrón meant exclusively pork, also I was incorrect. For those familiar with Jewish cuisine, these can be called gribenes. I learned about gribenes only a couple years ago, so I feel totally robbed that these were not part of my childhood. To accompany the chicharrón, the waitress poured some house-infused vinegar with chilies and garlic. This vinegar really elevated the flavor of the crunchy skin by adding some salt and sour. It is a little hard to see in the picture, but the freshness of these was confirmed in the couple of small feathers remaining in the skin. I never plucked a chicken, but can’t imagine it being that easy. 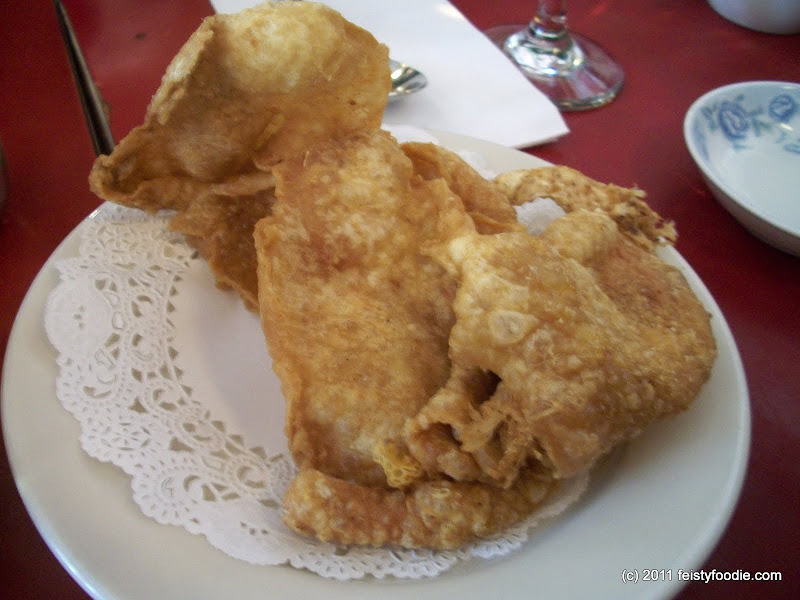 CT says: I always enjoy a crunchy bite of chicharrón, but I’ve never had the chicken version before. Even more, I’ve never had it served with a side of vinegar for dipping. However, this was a great way to enjoy the dish!! The acidity cut through the grease perfectly, without making it soggy because it was just a quick dip and bite!

For her main, CT order the tribute dish to Imelda Marcos, the infamous wife of the former Philippine President. Eggs Imelda($16): Lola Mahal’s home-style pandesal, laing (taro root leaves, coconut milk, shrimp paste, and chilies), grilled prawns, kalamansi hollandaise, kamote home fries and maliit salad. Yes, there were a lot of components in the dish. Basically, it was a Filipino version of eggs benedict with huge prawns. CT was especially elated that the eggs were perfectly poached. The last couple of brunches we had(i.e. Back Forty), the eggs were overcooked. This time the yolks were nice and runny! 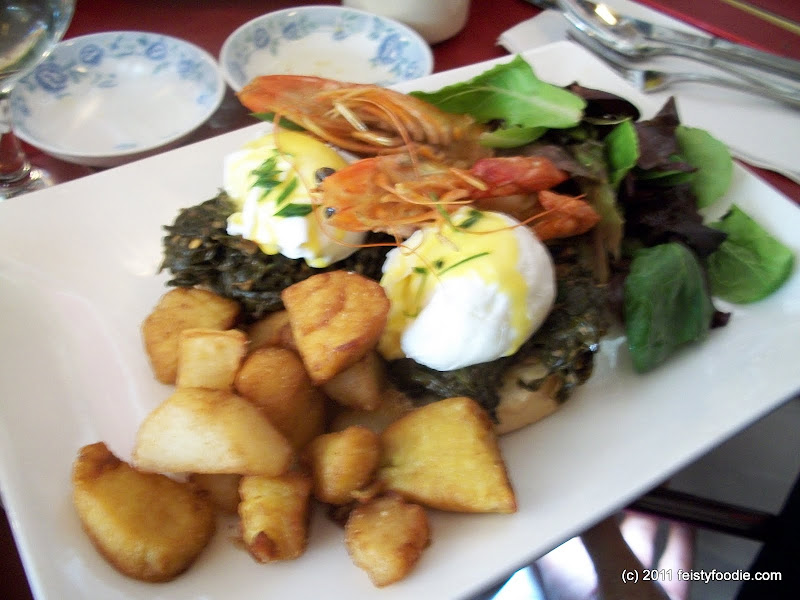 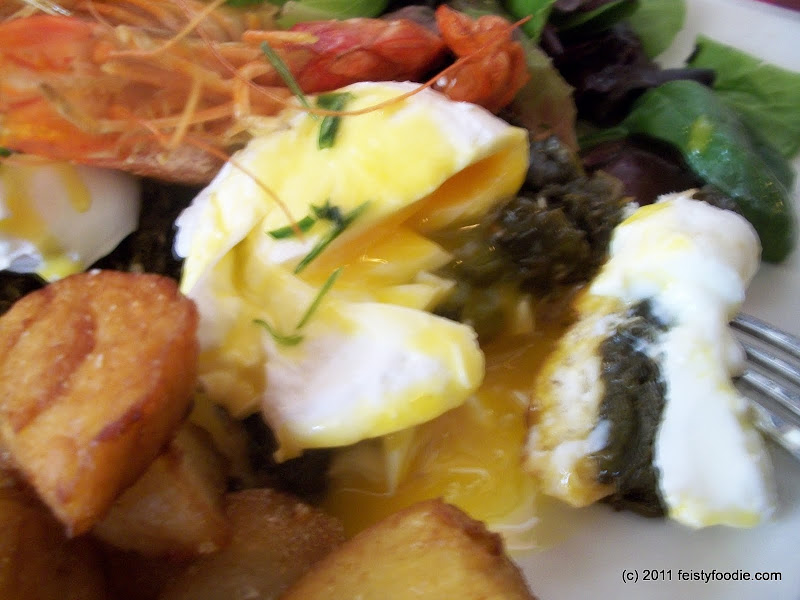 CT says: To say I enjoyed the dish would be an understatement. As you can see, it was quite a large portion – and I ate every bite (plus some of TT’s). The eggs were poaches so perfectly… oozing yolk, coating everything on the plate in a rich, creamy deliciousness. The grilled prawns were succulently sweet, also cooked perfectly. The kamote fries were slightly crunchy on the outside and soft on the inside. The texture was similar to potatoes, but slightly creamier. On their own their wasn’t much flavor to them – but dipped in the hot sauce and banana ketchup (yup – banana-flavored ketchup, weird but delicious), they added nicely to the overall dish.

The GM also made some hot sauce tableside with more of the same infused vinegar except this time with a lot more chilies. 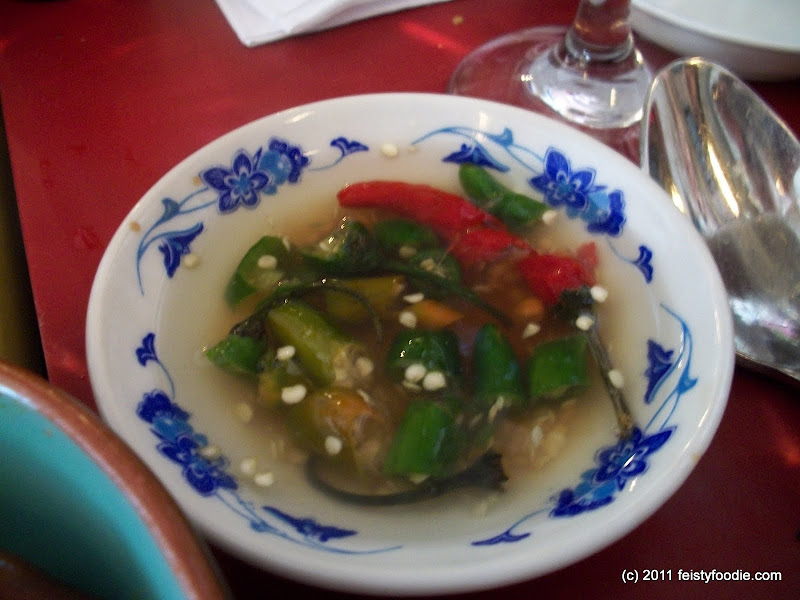 CT says: Not too hot, but added a nice little spice to the meal.

I chose a more traditional Filipino dish. Pampangan-style sizzling Sisig($13) with egg and garlic rice. Sisig is made of pig ears, snout, belly cooked 3x (boiled, grilled, sauteed) with onions, garlic, lemon and kalamansi. Served in a sizzling cast iron pan, it was basically an awesome corned beef hash. Except various pig parts substituted for corned beef and no pesky potatoes getting in the way. It came with a pretty big portion of garlic rice. I enjoyed taking a bit of the sisig and putting it in the rice to soak up some of the grease. I would have preferred a little more chili to amp up the spice but still enjoyed it for what it was especially since it was my first time eating it. Whenever eating new foods, I always try it unadorned first so none of the flavors get masked. Then I will decide if it needs a little something more. 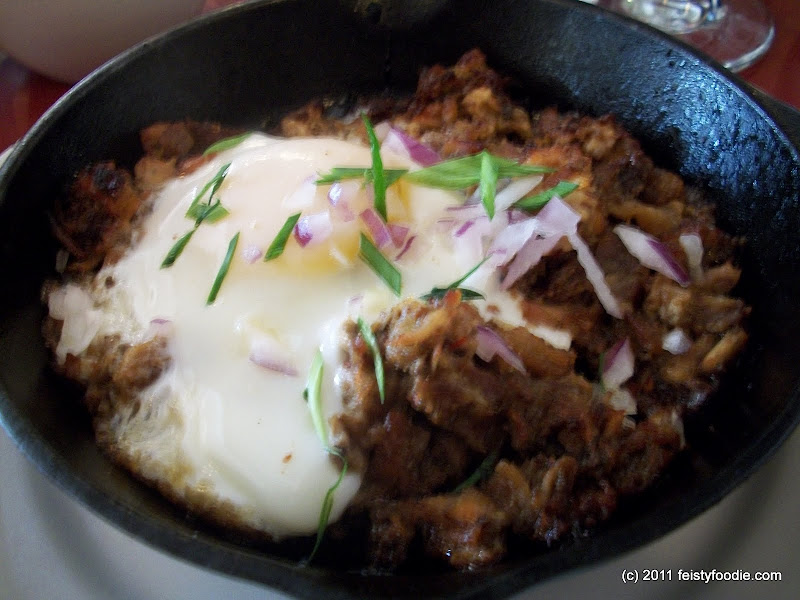 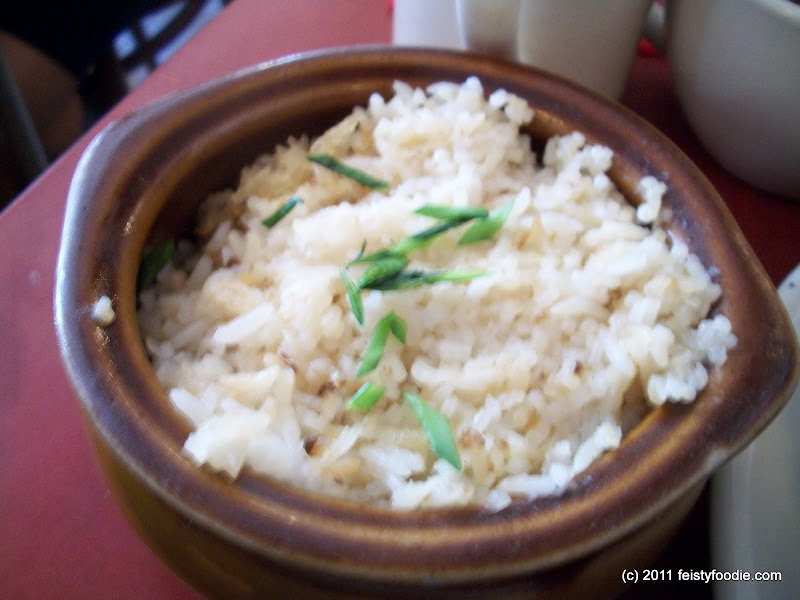 As if this wasn’t enough food, I also order a side of Longganisa ($5) to share. These were super traditional sausages that lean towards the sweet side. I enjoyed them even more when dipped in some of the vinegar hot sauce. A must order if you have never had. 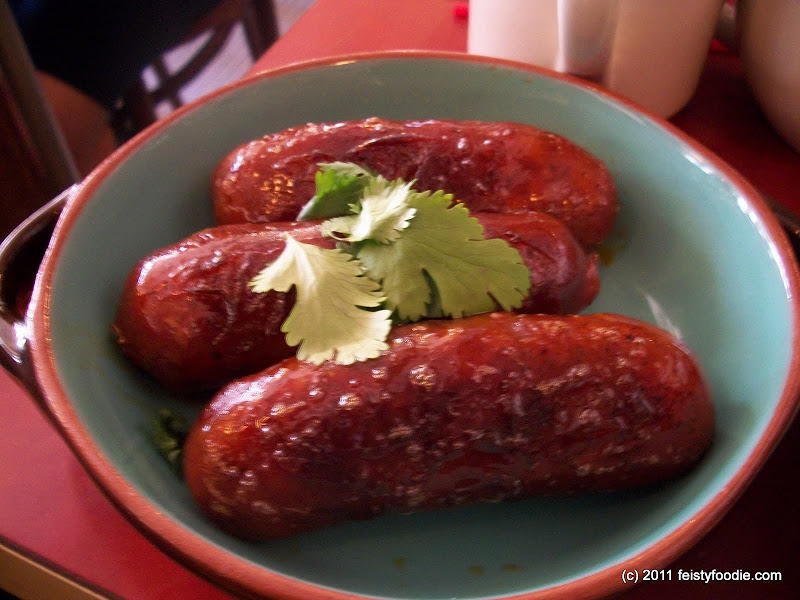 CT says: On top of my huge meal, I also indulged in these and really enjoyed them! If you like dipping your morning sausage in syrup – then these are perfect! Sweet and meaty… I would love to have rolled one up in a pancake and chomp away!

All in all, Robi made a fantastic choice for some of us to reconnect. Although CT and I have been on quite the brunch kick recently, it was fun to try something totally new. Filipinos know how to do brunch right. Although it was tight quarters, the food and prices more than made up for it. I hope this pop-up sticks around for a long time to come. As evidenced by the line, there was definitely a big demand for Filipino food. NOTE: Maharlika is cash only and reservations are strongly recommend for groups larger than four.