Oh, Convivio.  As I mentioned previously, after Matsugen and Lily O’Brien’s, I headed over to Convivio to meet up with the ladies of FBM for dinner.  We’d made plans to have dinner there during February so we could eat the old menu with the new chefs after the ‘divorce’ – yes, Michael White and Chris Cannon split their restaurant partnership, and unfortunately, Convivio, my favorite of the group that I’d visited thusfar, wound up with Chris Cannon, who’d hired new chefs.  Rumor was that the old menu would remain until post-February, when a new menu would be introduced, showcasing the new chef’s talents.  Unfortunately, though we had plans for the last week of February, something came up at work for one of the ladies, and we moved dinner to the following week (March 2)… where, upon our arrival, we discovered a new menu already in place.

Aside from that great disappointment off the bat (my favorite dish no longer on the menu, though something semi-similar was… though not quite; you’ll see), we put our game faces on and enjoyed the meal best we could, indulging in the $64 prix fixe for four courses from the dinner menu.  Service was a little odd, and a very loud woman with a piercing voice made the dining room almost unbearable towards the end of the night.  It was what it was, and we sadly trooped out, two of us extremely disappointed in what had previously been the obvious recommendation to others… two of us, having never been before, just disappointed in the less than wonderful experience, after hearing so many nice things.

Two days later, the bombshell dropped: Convivio was closing for good.  We’d managed to somehow eat one of the last meals they served, with no clue this was going to happen.  I feel a bit relieved to have been able to return prior to its shuttering: I know in my heart that the restaurant that closed was not the same as the one I’d fallen in love with.  But I was still sad that such a lovely, wonderful restaurant – the one with which I’d fallen in love – disappeared into the night, never to be seen again.  I also felt a little weird that I’d visited two restaurants in one day that no longer operate…

True to my form, though, I record here for posterity what we ate that night.

The last dinner at Convivio. 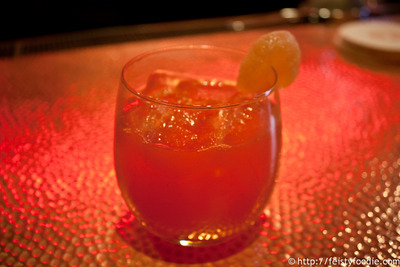 KC and I arrived together, a little early, and decided to order cocktails at the bar.  I started with a glass of prosecco (not pictured); she chose a cocktail made with whiskey, I believe.  The name escapes me, but there was ginger in it, I recall taking a sip and being less than thrilled with that, though I believe she enjoyed it.  (I fully expect everyone to chime in with their thoughts if I forget or don’t get them right!) 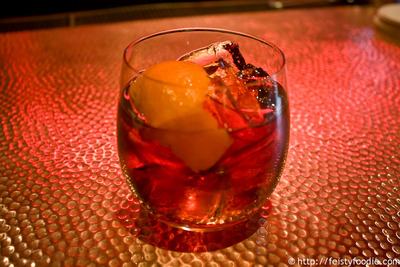 Hungry arrived shorly after, and ordered something with ‘bitter’ in the name.  I didn’t try this one. 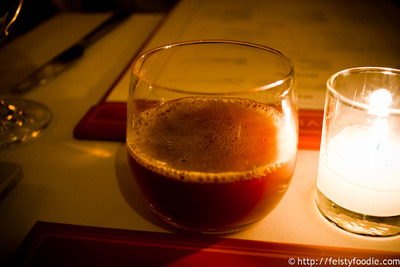 CT, coming from the farthest away, arrived last and didn’t order a drink until we were seated.  She chose something that came frothy… I think she liked it. 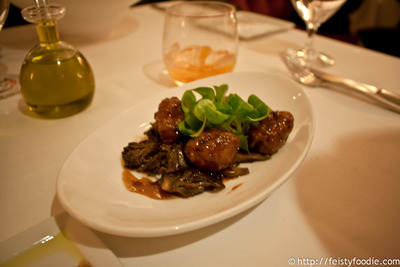 KC’s starter of polpettine (meatballs, gorgonzola, oyster mushrooms).  I tried these – they were pretty tender and tasty. 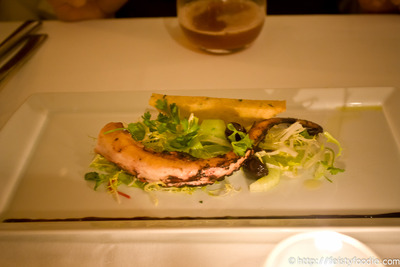 CT’s first course: polpo (octopus, chickpea panelle, taggiasca olives).  I think she liked this… but not the olives. 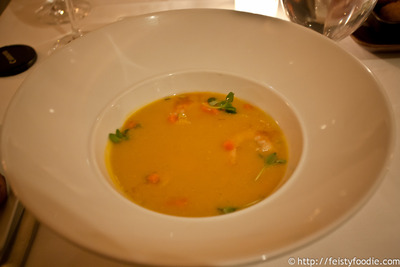 Hungry opted for the zucca e gamberi (butternut squash and shrimp soup).  I think she liked this well enough. 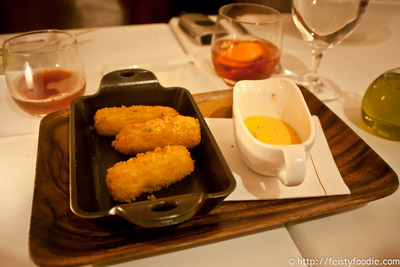 We also ordered crocchette (potato and pecorino fritters) for the table, because we’re crazy like that.  These were nice and crisp on the outside, creamy potato on the inside.  Wonderful?  No, just good. 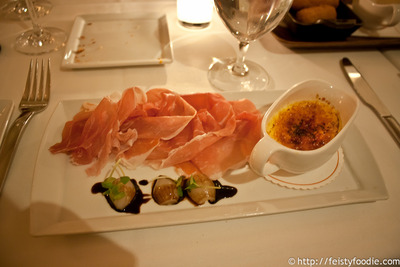 I chose the crema di bufala (buffalo milk custard, prosciutto di parma).  The buffalo milk custard was, in a word, amazing.  Soft, rich, and bruleed on the top to create a crackly crust through which I had to break in order to get to the center, I was in heaven just spooning this into my mouth.  YUM.   The prosciutto was salty and soft, as expected. 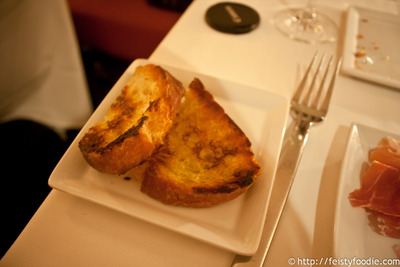 Bread accompanied this plate, but I barely touched it as I inhaled the soft prosciutto with the wonderful custard. 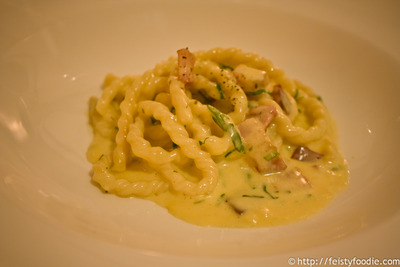 KC’s pasta course, fusilli alla carbonara, was unlike any I’d eaten or made in the past.  I love carbonara – made properly, without any cream – and this didn’t appear to have any cream in it, but the sauce itself was rich and creamy to the point where I was just completely confused as to how it was made.  I mean, I need to figure out how to make this myself; I really love creamy sauces in general and carbonara is actually rather healthy (or I should say, not that bad for you)… so good!  The fusilli was also cooked perfectly al dente, long, chewy strands and just incredible.  I don’t think KC liked it as much as I did, though. 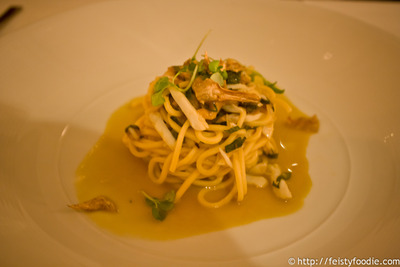 CT ordered the spaghetti con i ricci; Calabrian chili pasta, crab, sea urchin and zucchini.  I tried a small bite, though I didn’t really care for this similar dish in the past.  CT liked it, though not quite as much as she’d liked a very similar dish at Marea. 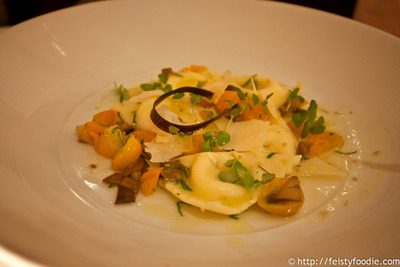 Hungry, who I’m sure will be blogging this meal eventually, ordered the ravioli – burrata, yellow tomatoes and baby eggplant.  None of us tried this, because as soon as she took a bite, she yelled, “I’m not sharing this, don’t even ask!”  Hahahaha.  That sounds pretty good, though I know she later said something else – but I LOVE burrata, and yellow tomatoes are great too.  Yum? 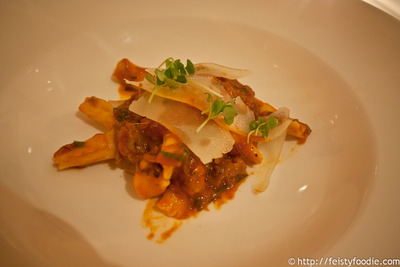 And my pasta course: mafalde alla vaccinara (slow cooked neapolitan oxtail ragu, shaved pecorino).  My previous favorite course had been the fusilli with pork ragu, so I went with a similar sounding sauce… but no, this fell far, far flat for me.  I was incredibly disappointed with this; the pasta was cooked properly, and the shape is one I’ve encountered very little or not at all, but the overall taste just wasn’t impressive.  I found myself wishing I’d ordered the fusilli at least for the pasta’s wonderful texture, and for what I now knew to be unbelievably creamy carbonara. 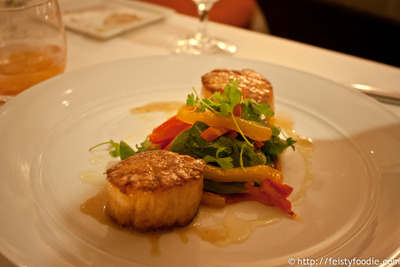 KC’s scallop dish; I don’t recall if she liked it. 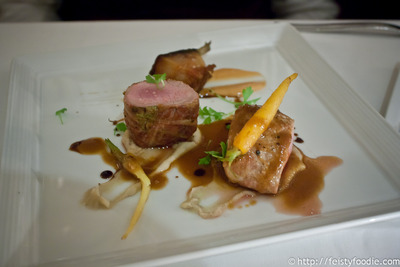 CT chose filetto di maiale (Berkshire pork tenderloin, quince mostarda) for her secondi.  I think she enjoyed it, though it was quite a small portion. 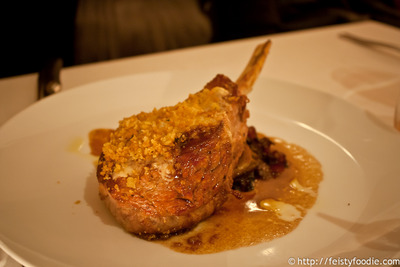 Hungry, for a $10 supplement, ordered the veal chop.  She shared with us, and this was incredibly tender, delicious, juicy.  It was also HUGE.  I think she just barely finished it.  It was as I’d experienced when BF ordered it.  Really, really tasty. 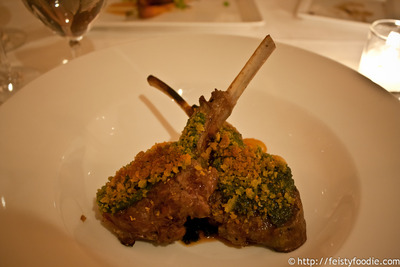 I decided to go with the lamb chops.  I thought this was tasty, but again, not outstanding.  Just good, and it doesn’t stand out in my mind at all. 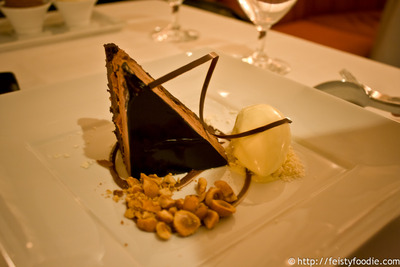 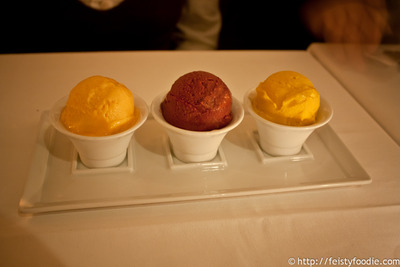 I know Hungry & CT each ordered a trio of sorbetti and gelati, but I don’t remember who ordered which.  I also don’t recall the flavors, though I know 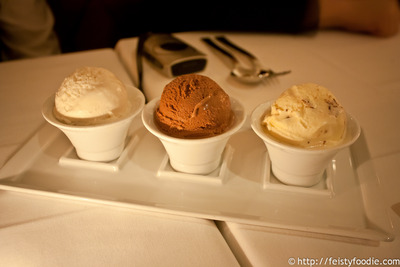 one of these was torrone (?) flavored, or Italian nougat.  I tried all the flavors and I remember they were all pretty good, but not amazing. 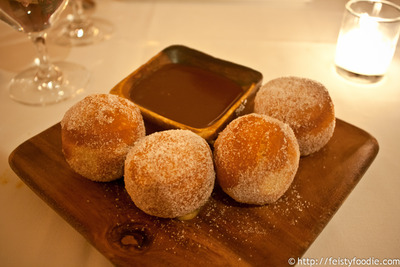 As for me, I chose the bomboloni, because I love Italian doughnuts.  Also because the dessert we’d all drooled over – the tartaletta (Meyer lemon crema, huckleberry compote, coconut gelato) – they wouldn’t let us order it after we asked them to remove the coconut gelato and add something else, in deference to my coconut allergy.  We were confused; it shouldn’t be pre-plated (not the gelato, anyway), but our server kept insisting we couldn’t have it since we had an allergy.  When we asked if it was in the tartaletta itself, she seemed confused, agitated, and said no, but then wouldn’t let us order it anyway.  Very odd.

The bomboloni came with a gianduja chocolate dipping sauce, and were supposedly filled with banana custard. 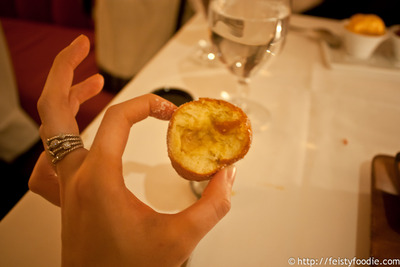 I actually thought they were filled with banana chunks!  These were tasty, but very dense and more cake-like in texture than like glorious bomboloni.  Ah well.

As with Matsugen, there isn’t much to say in terms of an “Yvo says” section.  I realize I was fortunate enough to visit Convivio a record three times before it closed (I don’t generally go to high end restaurants more than once, because I simply cannot afford it, and there are always other places to try!).  I also realize that I was even more fortunate to get to visit it before it closed permanently; as I mentioned earlier, I know for sure that this was not the same restaurant I fell in love with.  Had it remained open, it would have been simply a ‘pretty good’ restaurant, but not one I would recommend over and over to everyone.  In a way, it’s … well, it’s definitely bittersweet that such a wonderful restaurant had to disappear, and now that it’s shut for good… at least it ended on a mostly up note.  I am eternally grateful to have had the opportunity to dine there twice last year before the changes took place, and once this year afterwards.

Onwards to better things for everyone, I hope.

PS I noticed that during the meal, we all seemed to be enjoying it enough, and while not amazed or thrilled, it was good.  But after the meal, it seemed like a switch was flipped, and the other girls seemed to have progressively worse opinions of the meal.  I’ve noticed this happen in the past with other friends, and wonder to what this phenomena can be attributed… in any case, I fully welcome and encourage the other girls to pipe up and share their opinions!  Thanks ladies!

« What would YOU Wisp for? (contest)
Hecho en Dumbo »