After CT and I made plans to get drinks in Soho with some friends, we needed a place to get a bite to eat beforehand preferably nearby. I checked the multitude of available Blackboard Eats deals to see if any of those restaurants were in the area. I had not heard much about Cafe Kristall, but after checking the menu it looked like a tasty option. The restaurant was actually located in the back of the Swarovski boutique. While the space was pretty beautiful with crystals everywhere, the downside was the restaurant had to close when the store did at 9 pm.

We arrived for our 7:30 reservation to find only a handful of other diners. The restaurant opened back in November, so it is still possible that word hasn’t gotten out yet. The chef/owner also owns Wallse, where Yvo had a birthday brunch last fall. Since the restaurant was so quiet, service was especially attentive.

Although the restaurant has a full bar, the wine and cocktail list was quite short. 5 signature cocktails and 8 or so different options for each red or white wine. Glasses of wine started at $11, while bottles started at $40 and quickly went up. Since the wine list was pretty ridiculously priced, I just had a glass of red and CT had a cocktail ($13). She fittingly got the White Crystal (Double Cross vodka and white cranberry juice, citrus and St. Germain liqueur).

CT says: It was a less-sweet white cosmo. Yum!

After being seated and going through the menu, I was disappointed that the octopus carpaccio listed on the online menu was no longer available. Instead I went with the crabmeat with marinated fennel and tomato vinaigrette ($12). All of the dishes were plated quite beautifully, which paired with the elegance of the store perfectly. The crab was super sweet and worked well with the fennel. The fennel did not have its usual strong licorice taste, but I was glad it didn’t. This was a perfect, light dish to start the meal. 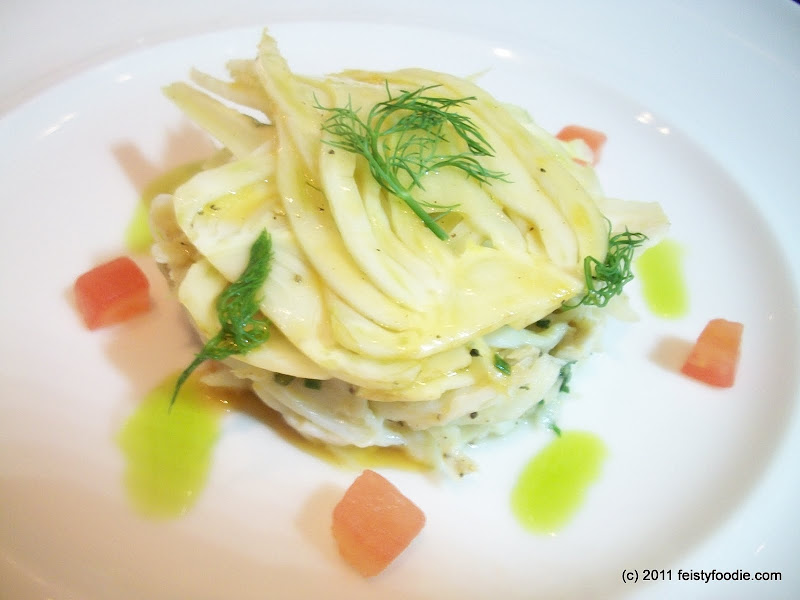 CT started with the red beet terrine with horseradish mousse and organic greens ($10). This was also quite delicious. As someone who recently played around with roasting beets, I really appreciated the knife skills on this dish. It is hard to see but there are a bunch of thin layers of beet in the terrine. Those were slippery suckers! The horseradish mousse was a nice complement, but I wished there was more horseradish in it to bring some more heat. 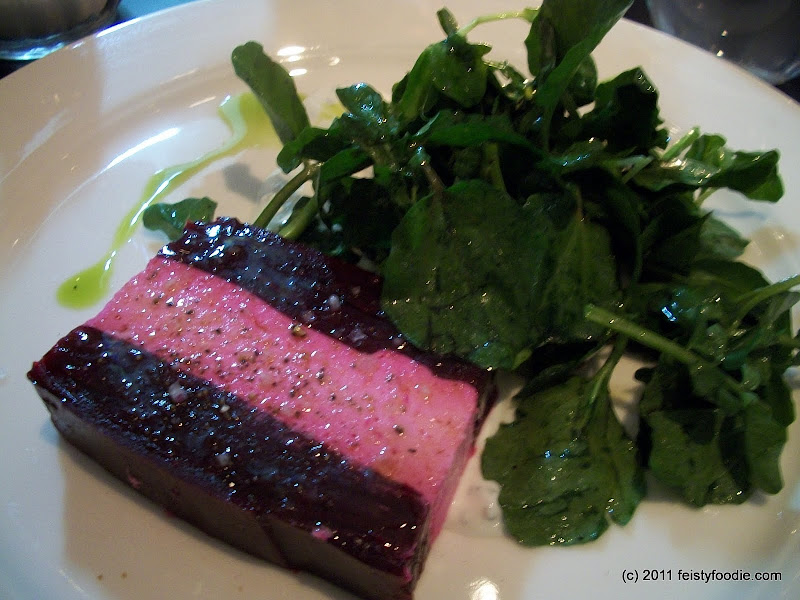 CT says: I really enjoyed this dish. The thin layers of beet somehow made the dish even more appealing than simply one chunky block of the vegetable. The mousse was very light and an excellent balance to the rich beets. The menu said horseradish, but I still decided to ask the wait was it was since there was no heat to it. He confirmed that there was horseradish in it. I wonder what it would have tasted like with a more pronounced horseradish flavor, but was still happy as it was. The mousse had a very mild and airy cheesy texture to it. Whatever it was, I gobbled up the entire thing and eagerly awaited our next course.

For her main, she ordered the wiener schnitzel with parsley potatoes, lingonberries and cucumber salad ($25). The veal was breaded and fried perfectly. Not greasy at all. I enjoyed a nice squeeze of fresh lemon on my taste. I am sure CT will mention, but I would have wanted more lingonberries in order to maximize the salty/sweet bites of the schnitzel. It also came with a side cucumber salad. 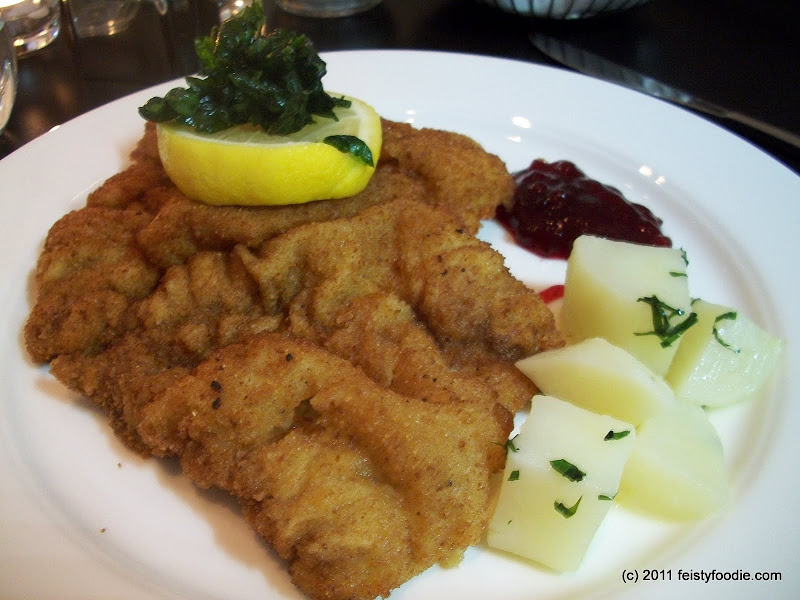 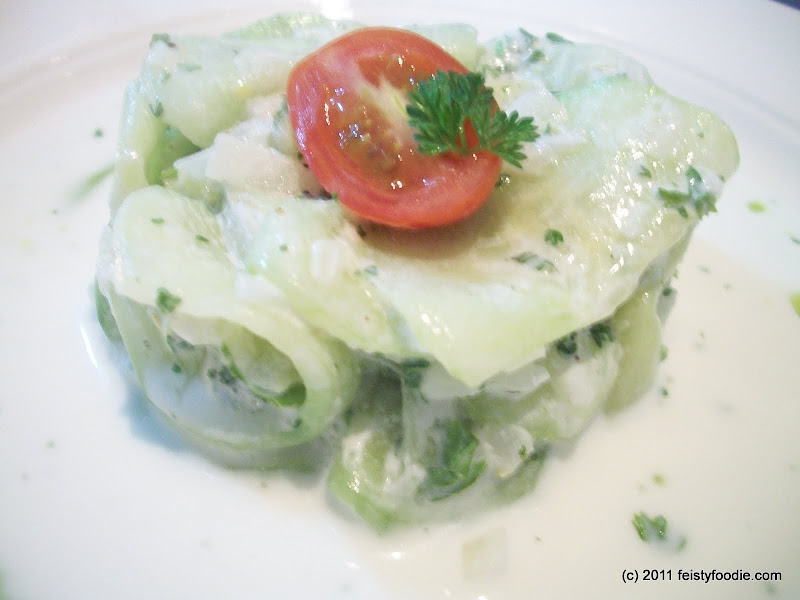 CT says: Delicious!! It was pounded to the perfect thinness and nicely crusted on the outside with no oil visible on the plate. With a splash of lemon and a dot of the sweet lingonberries, this neared perfection. At TT mentioned, a little more of the berries would have been appreciated as it was a rather large portion of meat. The potatoes were pretty bland, so I only ate one piece. However, I didn’t mind since my focus was on the veal. The cucumber salad, however, was a nice addition to the meal. It added a different crunchy texture to the plate. The cucumbers refreshed my mouth from the fried meat, so I could thoroughly enjoy each bite.

I got the sirloin schnitzel. This also was not on the online menu, but I believe cost around the same as CT’s entree. The meat, not fried, was topped with a salad and lots of parmesan. This was pretty delicious. The meat was cooked to a requested medium, which can be difficult since it was so thin. The salad was a bit overdressed, but some bread quickly remedied this. I was quite happy with my selection. 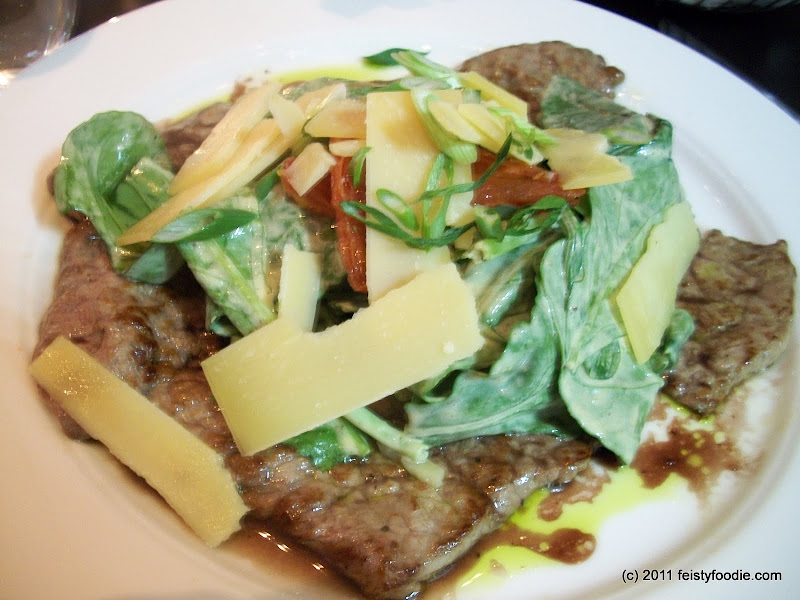 Since we both had a little bit of room left for dessert, we got up from the table to check out the dessert case at the end of the bar. They had quite a large selection of very pretty, mini desserts (all for $6 each). The problem was what to choose. On our waiter’s recommendation, we shared the Mozartkugel (sphere of dark chocolate mousse, nougat parfait, pistachios and chocolate streusel). I appreciated the little bit of silverleaf on top of the sphere. It was a great choice of chocolate dessert. Between the two of us, just a few bites were perfect to satisfy the sweet tooth. 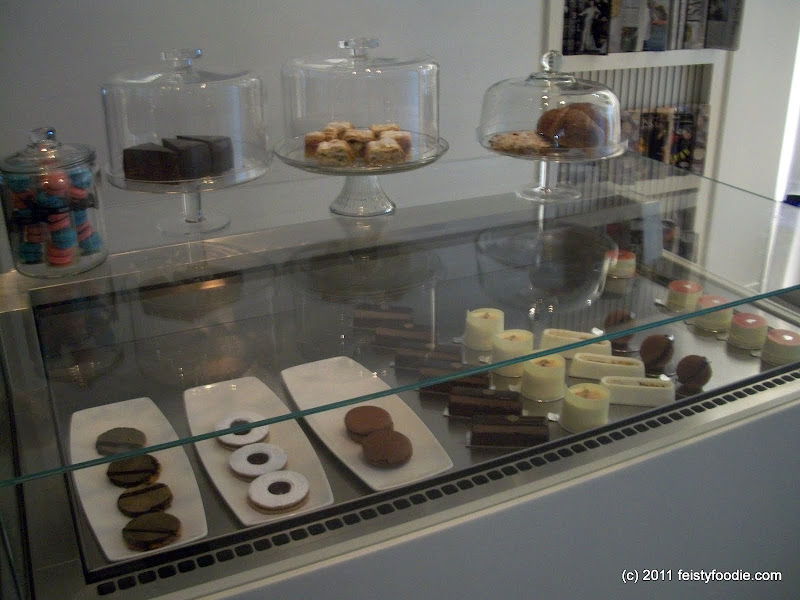 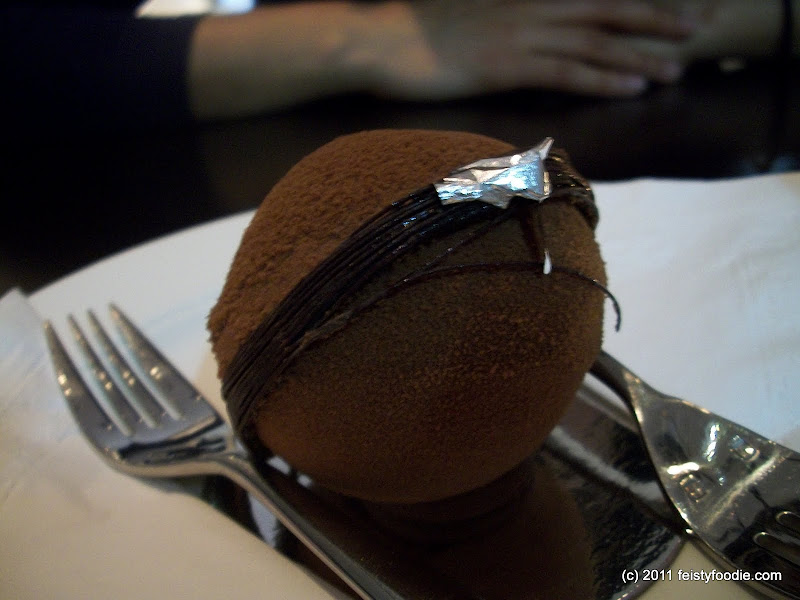 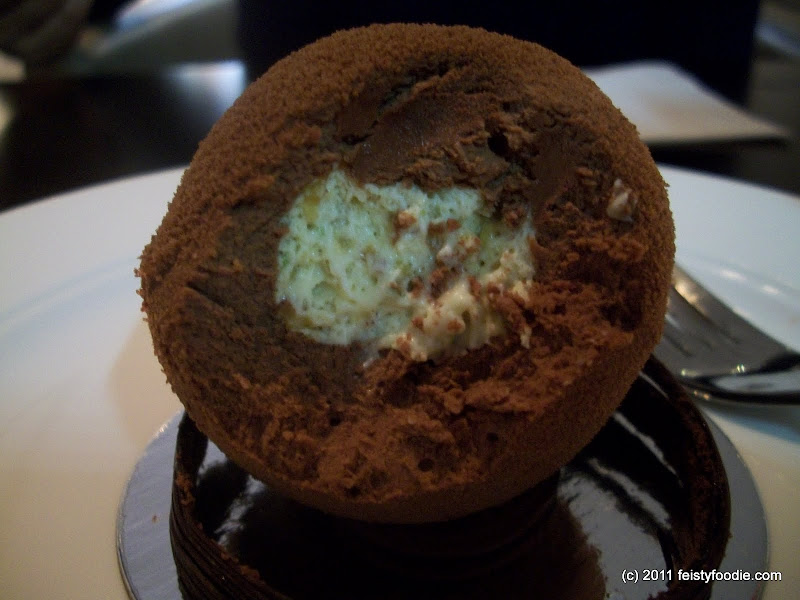 CT says: Agreed. It was rich and decadent without feeling heavy. The nougat inside the chocolate was quite a pleasant surprise. I’m not usually a nougat fan, so I can’t speak much about it. It was much lighter than I’ve previously experienced and worked beautifully with the chocolate mousse. I didn’t get much pistachio flavor (although I saw a few green bits), however they definitely weren’t missed either.

All in all, it was a delicious meal. It was sad how quiet the restaurant was. Maybe they do better business during the week? All of the food was delicious and reasonably priced. Drinks on the otherhand were a bit overpriced, but they have to make their profits somewhere. It was a unique experience eating inside such a luxurious store that I would do so again, especially if they offer more discounts in the future.