This is a lesson in comforting food and aesthetics: it ain’t always pretty.  Plain and simple.  I made a big batch of what I’m calling chicken & potato smush, which started out looking like chunks of chicken and potato – not pretty by any means – but as the days went on and I reheated it multiple times, it got progressively uglier, until it turned into what you see below. 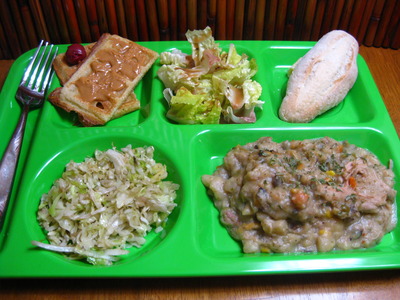 No sir, not pretty by any means.  But it sure tasted good. 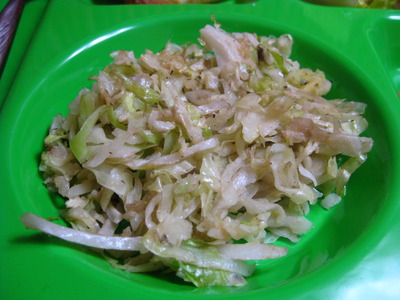 Shredded cabbage (which I tend to keep on hand to throw into soups on a whim) – I hadn’t felt like making soup and it was quickly turning, so I just tossed it into a pan with some olive oil and garlic, sauteed it lightly, and ate it.  Plain, simple, but good. 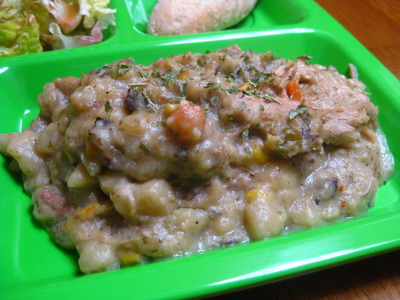 But the main portion of the meal truly looks like slop from prison or gruel from a torture camp or something, doesn’t it?  I assure you, it was really quite tasty and simple.  Well, tasty to my tongue, you may want to adjust seasonings and whatnot to your own tastes.  Since it’s so ugly and you assuredly won’t be making it the way I did – it’s one of those that you just use what’s on hand as opposed to trying to buy the same ingredients as listed – I’m just going to tell you how I made it.

I chopped up a chicken thigh or two and browned them in the bottom of my Staub, along with garlic and onions.  When it was nice and brown, I added frozen, raw cubed potatoes that I had leftover from something, and stirred that all around the pan.  As those started to cook, I added frozen veggies, seasoning (Italian seasoning, some parsley, salt, pepper, whatever I felt like at the time), and then mixed it together.  Initially, everything retained its own shape, but as I said, multiple reheatings made the potatoes break down until they just formed a coating around most of the other components.  I liked the way this tasted, but it might not be for everyone.

(I’m also big on not wasting food; it was certainly edible and tasted like a very thick soup, or even a bastardisation of chicken stew.  And I am pleased to be able to show to the world that I don’t always eat gourmet, high end, 3-star food!  I eat whatever I make too and sometimes that just isn’t pretty.) 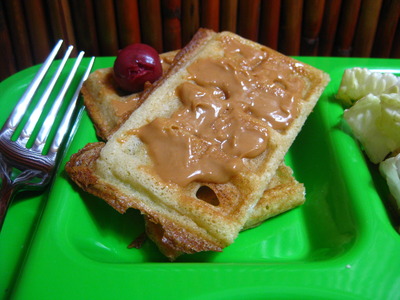 And for dessert, a leftover waffle that was toasted crisp, then smeared with some almond butter.  I had Morello cherries from Trader Joe’s so I took one out and plopped it on top for color.  A jar of those is only like $2, can you believe it?

Happy eating, and remember: it doesn’t have to be pretty to taste good!  Sometimes the prettiest food tastes the worst, too 😉